This Week in ORIGINAL SIN: The Final Judgment … and the March to AXIS!

Home » REVIEWS! » This Week in ORIGINAL SIN: The Final Judgment … and the March to AXIS!

Been a blast bringing you the weekly Original Sin wrap-up. So here’s the last (spoilerish) one … as we start up our weekly Axis wrap-up. The Marvel event juggernaut just keeps rolling along … 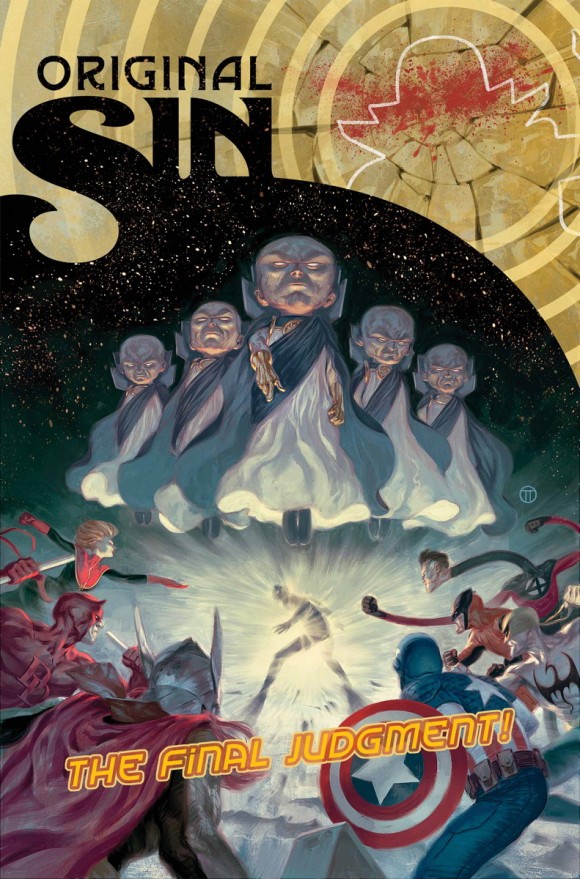 Original Sin #8. Writer: Jason Aaron. Artist: Mike Deodato. Color Art: Frank Martin.
Well, it’s all over. Was it anti-climatic? Yes, a bit, if you consider it a cosmic saga that “will change everything!” But if you consider Original Sin a standalone story that had its own place and purpose then it was a success. Stan Lee always used to preach the illusion of change, and after Original Sin, the Marvel Universe spins on. I applaud Marvel for not killing Nick Fury Sr., not doing the obvious thing and shuffling the old warhorse out to pasture and focusing on his more Hollywood-friendly son. Instead, Marvel found a new purpose for Fury, a place that makes him unique in the scheme of things, a place deliciously ironic for a man with an eye patch. I applaud Marvel for utilizing the Winter Soldier and finding a new status quo for Bucky. I applaud Marvel for taking a huge cosmic event and folding it all into the structure of a classic mystery. It was a well-rounded story that did change things, as evident by that last panel of a distraught Thor desperately trying to lift his fallen hammer. It was a fun crossover with emotional beats and immaculate art as Deodato channeled his inner George Perez and jammed his panels with tons of characters, each with their own visual personality. It isn’t going to change the medium, it didn’t reboot anything (although it retconned a poop load), but it was a well-structured story that I for one, enjoyed. The final issue tried to cram a bit too much in, but it was mostly satisfying. I am going to miss reviewing Original Sin as the conceit was always interesting and brought out some great creativity from the creators involved.

We bid farewell to the Watcher, old Nick, and severed giant eyes … and we welcome you to the March to Axis! 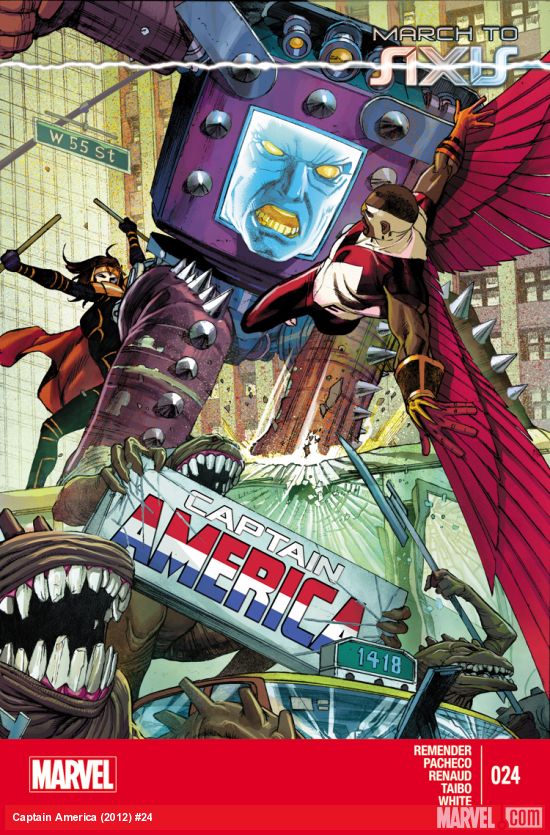 I’m thinking the Falcon doesn’t die at the end of this one. Really just a place-holder issue before Falcon takes up the mantle of Cap (spoiler!) in November. I guess it’s an Axis tie-in because of the brief Red Skull appearance. Really, the whole issue is the heroes fighting Armin Zola with only a brief appearance by the aged Steve Rogers. Remender writes some good action here and continues to make Zola a viable arch-villain, but other than the brawl, not much happens. Pacheco and Renaud draw the hell out of it though. Clearly, the real story will take place when Falcon dons the colors, but this issue, while competent, is a little empty on story.