This Week in ORIGINAL SIN: The Books of Revelations

Home » REVIEWS! » This Week in ORIGINAL SIN: The Books of Revelations

WARNING — SPOILERISH: Original Sin! Spidey! Fantastic Four! We’re almost at the end of Marvel’s big event and the reveals are getting bigger and bolder! 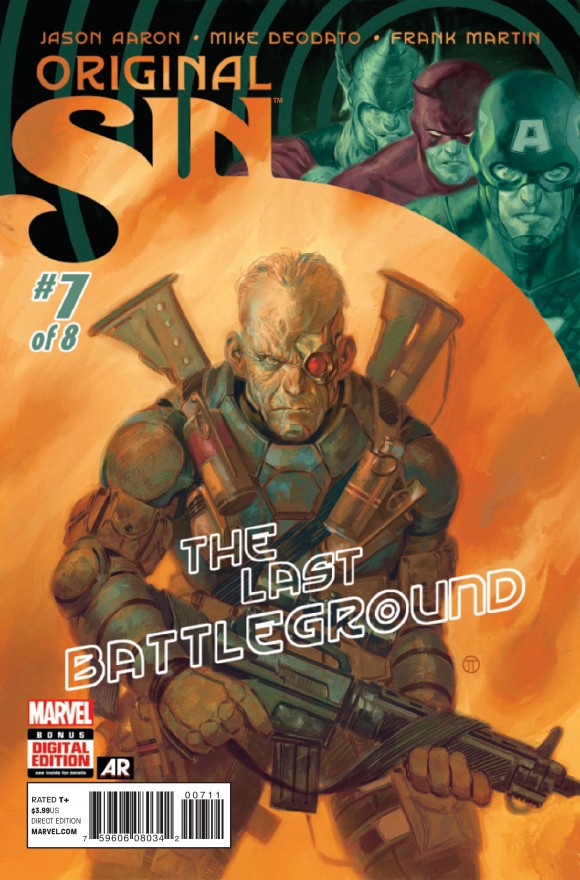 For those of you wondering, for good or ill, how Thor will lose his hammer and be replaced by that female Thor, well, it all happens here. But this isn’t a Thor story; this is a Nick Fury tale, a tale of Fury’s desperate battle with the heroes of the Marvel Universe. We get the revelation of who killed the Watcher, a development that’s structurally sound if a bit anti-climatic. That may be the point, though, as there is something poetic about a miniscule being killing such an omnipotent entity as the Watcher, a small stone leaving a big ripple in the Marvel cosmos. There is a great deal of coyness to this issue, as almost all the secrets of the series are revealed, but Aaron saves a bit for next issue’s finale. But it’s the Thor moment that is so powerful, the moment where the old Nick Fury whispers a secret into Thor’s ear, a secret that makes the God of Thunder drop his hammer and lose the ability to lift it back up. The success of this issue will be predicated on the conclusion next issue, but as it was, it was an intriguing read that seemed rather character-driven while delivering tons of kickass action.
Grade: B+ 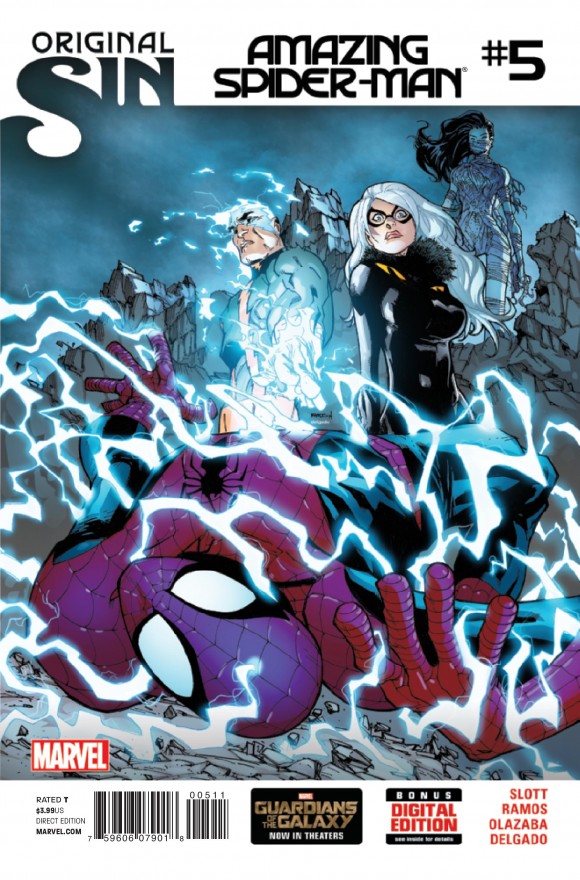 Amazing Spider-Man #5. Writer: Don Slott. Penciler: Humberto Ramos. Inker: Victor Olazaba. Colors: Edgar Delgado.
Last issue readers met Silk, a woman whom Peter discovered was bitten by the same fateful Spider that bit him. The discovery of Silk is really the only Original Sin connection as the issue consists of an exciting fight between Spidey and Silk versus Electro and Black Cat. I dig the way Slott takes the threads of the Spidey film and portrays Electro as a barely stable patsy, a dangerous weapon utilized by an increasingly unstable Black Cat. I am very interested in this dark-side Felicia Hardy as the character is going to some new places, and even though there is a feeling of tragedy around her fall, it still makes for some darn fine reading. Slott also gets some J. Jonah Jameson goodness in there and concludes with a really nice old-school cliffhanger. Slott does it all except really interest me in Silk, who just seems to be a plot complication rather than a fully realized character. But Slott certainly has earned the benefit of the doubt. Ramos was born to draw Spidey and continues to get better with every issue. The Silk designs are particularly impressive as is the new look Black Cat who has undergone some subtle changes to reflect her new status as a full-on villain.
Grade: B+ 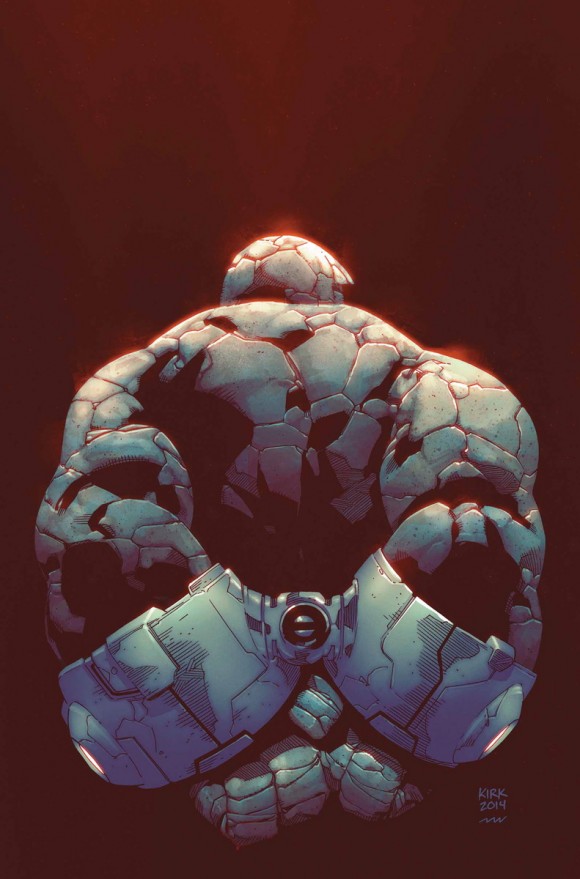 Although a bit joyless, James Robinson’s Fantastic Four continues to bring the drama for each member in the wake of the revelations of Original Sin. This issue was a bit too much of a rehash as Robinson spends an inordinate amount of time showing Thing’s arrest for the murder of Puppet Master and Sue’s rampage against the Avengers; Sue’s plight in particular has been covered before. I do really like the use of Jim Hammond, the original Human Torch, in the book as he has become the mentor to the kids of the Future Foundation, a great role for a sorely underused character. Once the book started giving readers new info, it was a heck of a read. I look forward to more Hammond as Johnny Storm remains powerless as well as an issue featuring Ben Grimm in a super prison. Oh, yeah!
Grade: B