This Week in ORIGINAL SIN! Sins, Sins and More Sins! 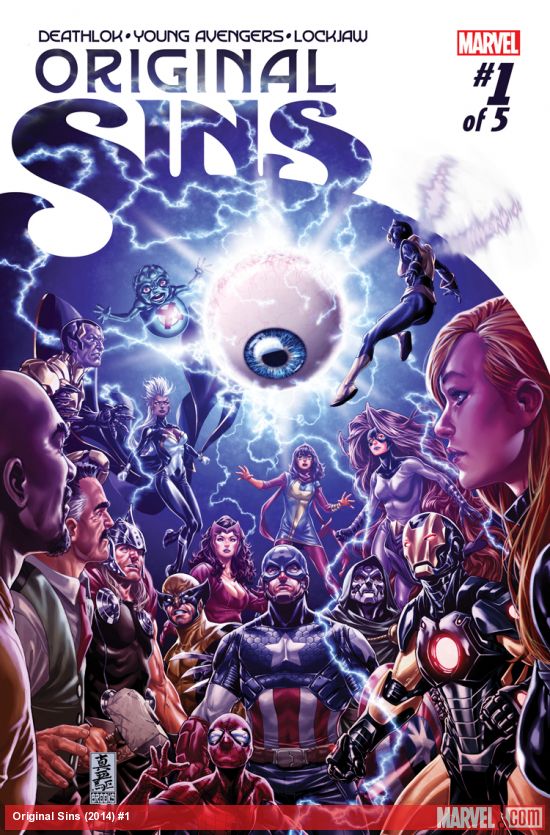 Original Sins #1. Anthologies are always trick business, but potentially lots of fun. The shorter form of the anthology allows writers to explore some fringe characters of the Marvel Universe while flexing their creative muscles by utilizing a shorter format than a regular monthly feature. Original Sin certainly provides a story engine that can allow creators to springboard stories off the idea of secrets and sins being revealed by the murdered Watcher’s stolen eye (did I just really type that?). Original Sins #1 takes advantage of the premise by presenting stories that are connected but happily not limited by Original Sin. (And it all works as an ad to a bunch of new Marvel titles — Dan)

Deathlok. Writer: Nathan Edmondson. Artist: Mike Perkins. Color Artist: Andy Troy. First up, we have the intro of the new Deathlok by Edmondson and Perkins. Perkins is one of the most solid storytellers in comics right now, and Marvel chose the perfect artist in which to introduce their new Deathlok, a character that is coming off a year’s worth of buzz thanks to the concept’s inclusion in Marvel’s Agents of SHIELD. Original Sins #1 introduces Henry Hayes, the latest soldier to bear the legacy of Deathlok. Edmondson a good job of introducing Hayes and revealing who this new Deathlok is as a person. It all works and I look forward to the character’s October debut. The best compliment I can give this story is that it sold me on the new Deathlok series. Grade: B.

Young Avengers. Writer: Ryan North. Artist: Ramon Villalobos. Color Artist: Jordan Gibson. Not as effective was the Young Avengers installment of Original Sins. The feature just tried too hard to be hip with overly snappy dialogue and an alt-style art that really just failed to capture the flavor of the previous, and downright brilliant, Young Avengers series. The story features Prodigy, Hulkling, and Marvel Boy, none of whose characterizations synchs with what’s come before. The story is loosely connected to Original Sin by the inclusion of Exterminatrix, Marvel Boy’s psycho ex-girlfriend. Prodigy acts more like a surfer dude rather than the understated humble genius of past stories, and the other YA members just kind of stand around and act like caricatures of young people, what with the texting and pizza eating. Young Avengers fans will be disappointed. Grade: C-.

Lockjaw. Writer: Stuart Moore. Artist: Rick Geary. Color Artist: Ive Svorcina. Two pages of sheer adorableness. A well plotted mini-gag to round out the issue. Let’s call it a B+. 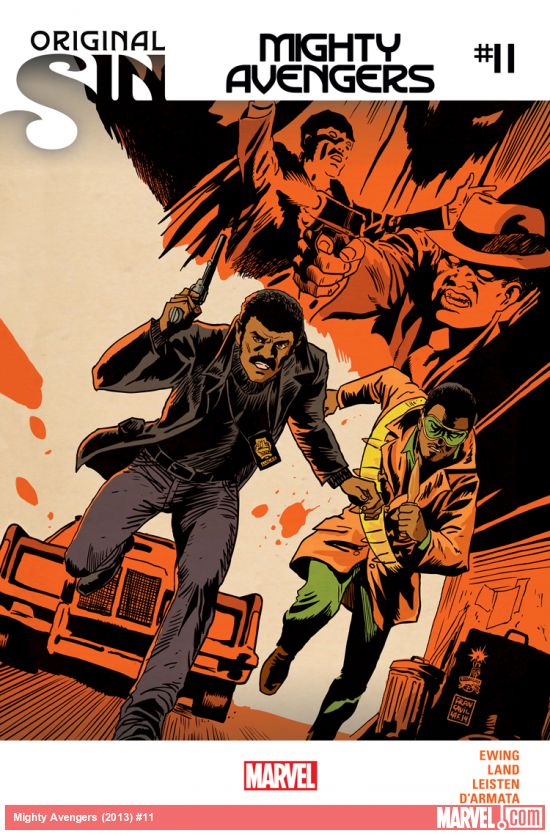 Mighty Avengers #11. Writer: Al Ewing. Artist: Greg Land. Inker: Jay Leisten. Color Artist: Frank D’Armata. Now that‘s how you do a crossover. Mighty Avengers #11 starts out with a connection to the Watcher’s eye exploding, but it ends with a decades-spanning conspiracy involving a vampire cult and the 1970s version of the Mighty Avengers. You see, Luke Cage is caught in the Eyesplosion and finds out his father once led his own team of Avengers in the ’70s consisting of Blade, Blue Marvel, and a very Bronze Age magic man named Kaluu the Mystic. The book is more than just fallout from Original Sin; it’s a chance to explore the relationship between Luke and his estranged ex-cop father, a chance to tie into the Blade sub-plot that has been running the past few issues, a chance to explore the past relationship of the Cage family and Blue Marvel, and a chance to tell a Bronze Age bit of coolness in the modern era. Grade: A. 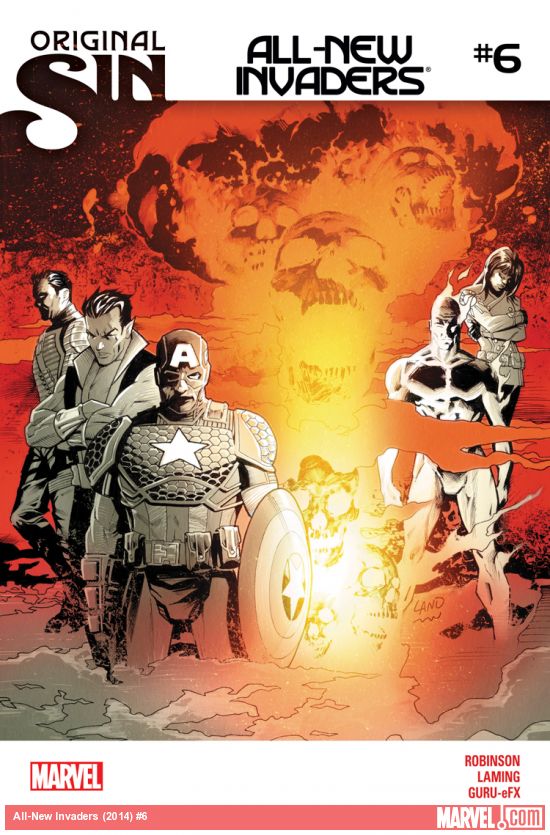 All-New Invaders #6. Writer: James Robinson. Artist: Mark Laming. Colorist: Guru-eFX. Mighty Avengers explores one era of the past, while All-New Invaders stretches even further back to explore the sins of the Invaders’ past in World War II. In this issue, Robinson and Laming introduce Japanese hero Radiance, a retconned relative of little known WW II hero Golden Girl. Somehow, Robinson introduces a new character steeped in Marvel history and avoids making the whole thing continuity porn. Radiance is a fascinating new character who must question her place as a hero after the Watcher’s eye reveals that the Invaders might be responsible for the bombing of Hiroshima. All-New Invaders #6 tells a great story sparked by Original Sin that also pays homage to Roy Thomas’ work on the original Invaders series. Grade B+.