This Week in ORIGINAL SIN: Sins Everywhere You Look!

The Marvel event hits the halfway point — and here are our grades for this week’s books. 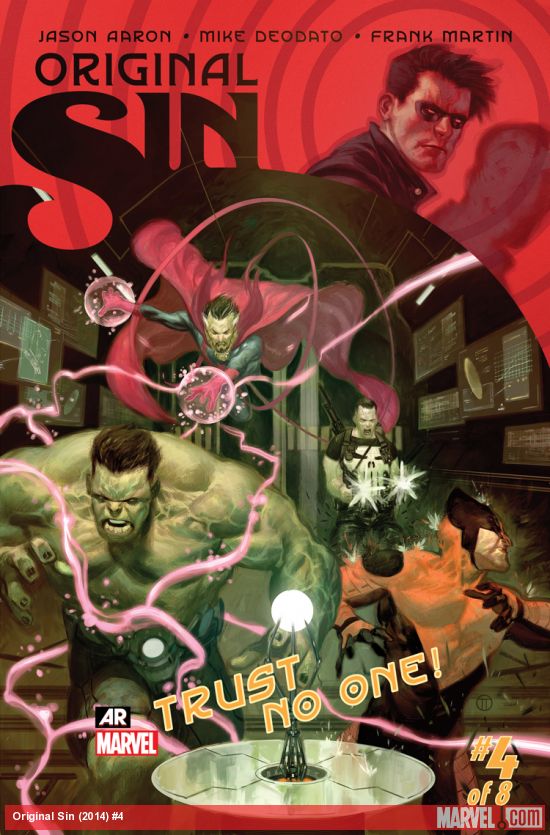 Original Sin #4. Writer: Jason Aaron. Artist: Mike Deodato. Color Artist: Frank Martin. Another issue, another cool WTF moment as Aaron and Deodato continue to unravel the craziest murder mystery in comic book history. This issue features the repercussions of the revelation that Bucky may be a traitor in the heroes’ midst, but all is not what it seems as Aaron turns over a few cards about the true nature of Nick Fury that align with the history of the character. Aaron writes an amazing Punisher, a character who should seem out of place among all these cosmic shenanigans but somehow acts as a glue that binds the story to reality. Not many questions are answered but things remain gripping, and can someone please tell me why the Orb is the breakout star of the series? The art is never muddled despite the billions of characters who appear throughout the issue. All the groups investigating the murder of the Watcher aggressively dovetail together to create some fun brawls like Emma Frost vs. Gamora, Winter Soldier vs. Black Panther, and a badass posturing standoff between the Punisher and Rocket Raccoon. The ending surprises, there’re a bunch of laughs, and some good old-school Marvel cosmic action. What more can you ask for really?
Grade: A.

Avengers #31. Writer: Jonathan Hickman. Penciller: Leinel Francis Yu. Inker: Gerry Alanguilan. No one does big quite like Jonathan Hickman. Sometimes, he goes too big and loses a bit of humanity in his stories, instead focusing on concepts over character. This is not one of those stories. The Original Sin aspects of this issue begin and end with the secret that the Avengers recently betrayed and mind-wiped Captain America. From there, Hickman expands his story throughout the timestream, introducing a group of future Avengers so shocking that I will not spoil it here. Rest assured, like all of Hickman’s books, it’s big, but it is also a very personal story for all the Avengers involved, particularly Cap and Thor. It may have ties to Original Sin, but these Avengers issues are branches off the crossover that end up becoming a story perhaps even bigger than the event itself. Yu has to do plenty of visual world-building and he meets the challenge head on. This is a damn fine comic. 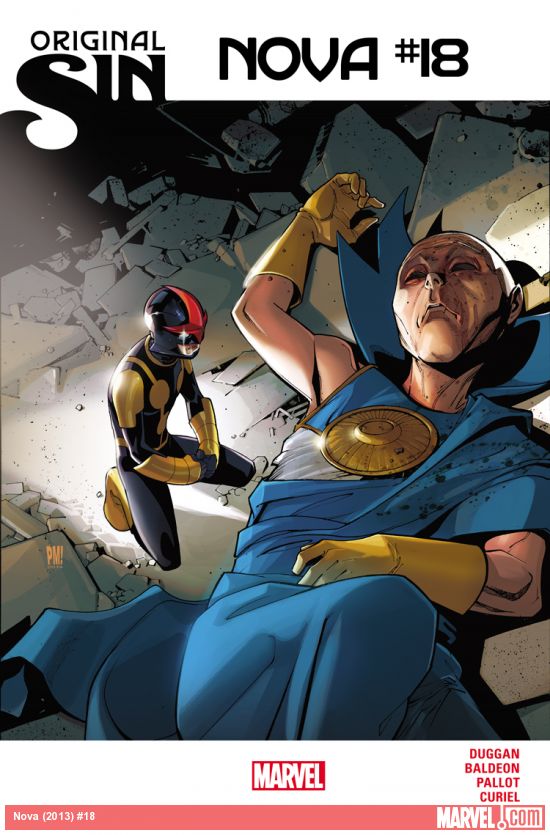 Nova #18. Writer: Gerry Duggan. Pencillers: David Baldeon, Terry Pallot, and David Curiel.
Many of the monthlies that have crossed over into Original Sin have used the events of Jason Aaron’s magnum opus as a springboard, not fully taking part in the A plot of the series but riffing off the events of the Watcher’s murder. Nova does not springboard, it takes place right in the heart of Original Sin and the pacing of this tie-in issue suffers because of it. At times, while reading Nova #18 by the always capable and innovative Gerry Duggan, I felt like I was rereading Original Sin #1. That’s never good. Duggan somewhat saved his story by making the stakes so deeply personal for Sam Alexander. The Watcher served as a major supporting character and mentor for Nova, so his murder has resonance as the neophyte hero tries to make sense of it. But when the Watcher’s eye explodes, the secret Sam discovers is muddled and confusing. Duggan wasn’t helped by the fact that three pencillers worked on the book, making the whole package seem rushed and amateur-like despite the excellent and emotional character work.
Grade: C-.