This Week in ORIGINAL SIN: Nostalgia and Tighty Whities

Our weekly wrap-up and reviews. SO. MANY. SINS. 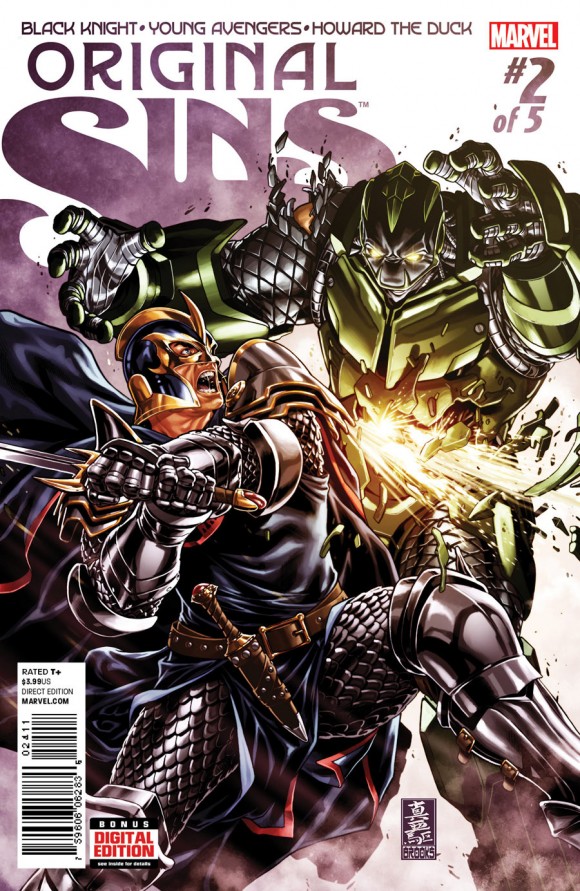 Black Knight. Writer: Frank Tieri. Artist: Raffaele Ienco. Color Artist: Brad Anderson.
Confession time. I absolutely adore Dane Whitman, the Black Knight. One of my favorite all-time characters, truth be told. If I ever hear the Black Knight’s name coming out of Kevin Feige’s billion-dollar mouth, I may prolapse. That being said, I really can’t approach any Black Knight story with a balanced journalistic eye, so take the following with that in mind. The Black Knight story in Original Sins #2, sadly, is not one I wished to read. It’s been done before; the character has so few appearances these days, it’s a shame to return to the whole possessed-by-the-Ebony-Blade thing. The character has moved beyond that thanks to Paul Cornell and the late, lamented Captain Britain and MI:13. This story consists of a freshly introduced author and authority on the Ebony Blade grilling Dane Whitman through a closed door. As I said, so few Black Knight appearances in the modern era, and this one consisted of Whitman spending the story in his tighty whities getting harangued by a stock character. I won’t judge too harshly, Tieri is usually good for a thrilling story, maybe there’s a nice redemption arc coming for my beloved Black Knight, but so far, color this fan disappointed. Real nice art though.
Grade: D+

Young Avengers. Writer: Ryan North. Artist: Jordan Gibson. Color Artist: VC’s Clayton Cowles.
Last issue, I commented how the Young Avengers presented in Original Sins did not act like the Young Avengers at all. Well this issue, Ryan North shows that he sure as heck knows how to write the Hood as things take a turn for the better and bring in the events of Original Sin with great effectiveness. The Young Avengers confront the Hood who is just trying to protect a group of drug addicts who have had their minds enhanced by the Secret Bomb. It’s all very quirky with a coating of eeriness but it works as the Hood stays in character as a user and a con man who has a smidge of altruistic motivation. The Young Avengers don’t really do much beyond reacting and listening, but the story presented is a nice way to show how the events of Original Sin are trickling into the everyday life of the Marvel Universe, even to a bunch of addicts protected by the unlikeliest of champions. I didn’t like the first chapter, but this installment has the Young Avengers feature moving in the right direction.
Grade: B

Howard the Duck. By Ty Templeton with colors by Paul Mounts.
For two wonderful pages, Ty Templeton channels Steve Gerber in a brilliant tribute to the greatness of Howard the Duck. It can’t be easy to boil down the essence of a character in two pages, but Templeton does it with gusto. Pure joy.
Grade: A
Overall Grade: C+ 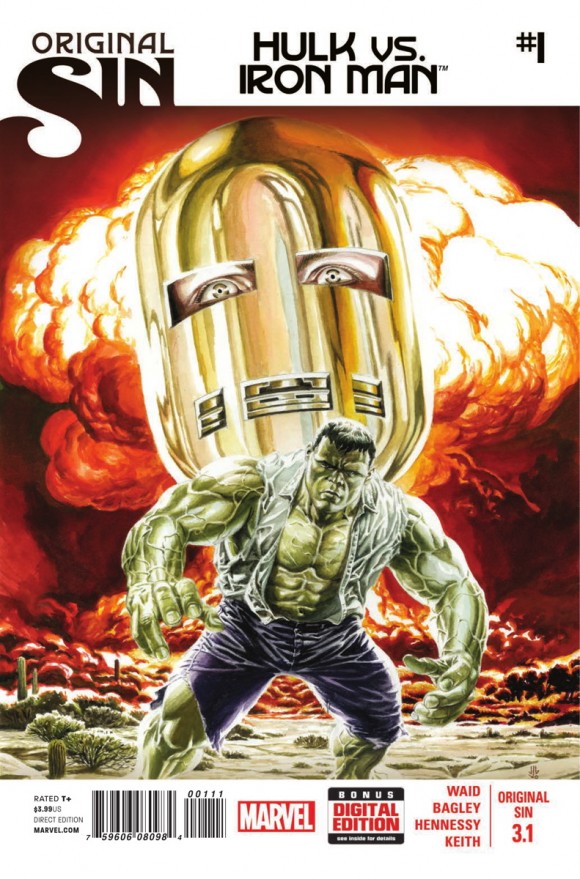 ORIGINAL SIN #3.1: HULK vs. IRON MAN #1. Story: Mark Waid and Kieron Gillen. Script: Mark Waid. Pencils: Mark Bagley. Inks: Andrew Hennessey. Colorist: Jason Keith.
Any .1 issue is seen by the more cynical as a cash grab, an attempt to stretch an event book beyond the core story in order to drain the fan base of all their summer event-supporting dollars. Well, when said .1 story stretcher boasts a creative team like Mark Waid, Kieron Gillen, and Mark Bagley, Marvel is more than welcome to my dollars. Hulk vs. Iron Man spins right out of the Secret Bomb detonated by the Orb in Original Sin. It is a book that does what Original Sin tie-ins are meant to do: use that detonation as a jumping-off point with some character-altering directions for the Marvel Universe. At this, Hulk vs. Iron Man succeeds admirably as Waid and Gillen play up the early days of both Stark and Banner to create something drenched in nostalgia but wholly new and exciting at the same time. I can’t remember a time when Waid wrote Iron Man but judging from this issue, he damn well should make it a recurring habit. The stakes are high, personal, and intense and Bagley brings his A game in terms of emotion and action to enhance the event. I look forward to more.
Grade: A 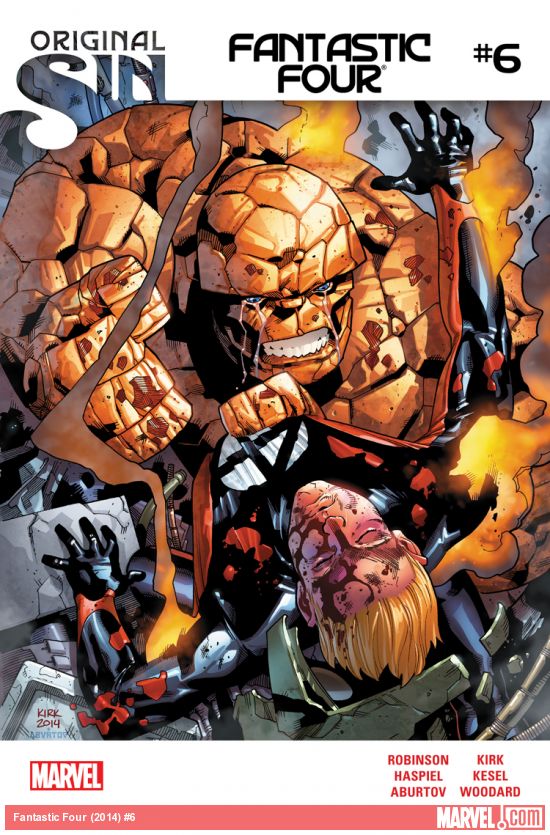 FANTASTIC FOUR #6. Writer: James Robinson. Pencils: Leonard Kirk. Inks: Karl Kesel. Colorists: Jesus Aburtov and Veronica Gandini. Original Sin Flashback: Dean Haspiel and Nolan Woodward.
Amid all the controversy of Marvel ending Fantastic Four due to some conceived financial beef with Fox, James Robinson and Leonard Kirk have been kicking butt on the monthly title, and now Robinson gets to play with the Original Sin conceit. The book has been dramatic and intense, with the Four losing everything in court and Johnny Storm losing his powers. Robinson has kept the familial vibe of the book while bringing the drama. But this issue overdoes it: The Avengers refuse to let the FF in their building and Sue lashes out in frustration. It doesn’t end there. As part of Original Sin, the Secret Bomb revealed that Johnny once sabotaged one of Reed’s experiments, causing Ben to further mutate rather than be cured. It’s all rather obvious and heavy handed, but we’ll see where it goes. Robinson has earned a modicum of reader faith, but as far as dark secrets from the past go, it’s not all that juicy and a pretty easy go-to. The issue does have a fantastic subplot utilizing the Future Foundation kids and the original android Human Torch that really does make the issue. I do miss that book and am happy Robinson is keeping the characters in the spotlight, and I am thrilled with the inclusion of the original Torch. What makes this book is the art. Kirk is one of the most underappreciated draftsmen in comics and deserves recognition and superstar status. And Dean Haspiel and Nolan Woodward provide a perfect nostalgic contrast sequence for the flashback of Johnny’s sin that is worth the $3.99 just to gaze upon.
Grade: C+