We read ’em all so you don’t have to! This week: Original Sins, Thor & Loki, Avengers and MORE! 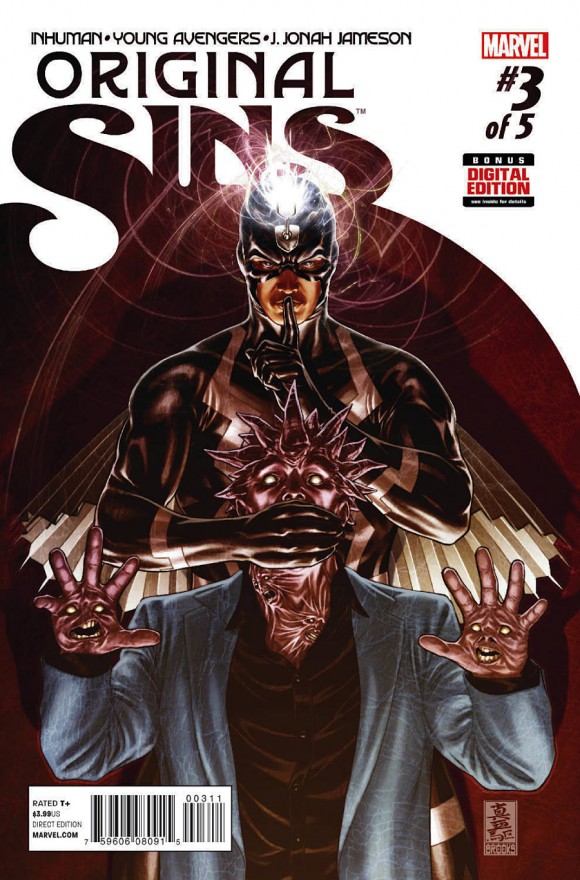 Original Sins #3
Inhumans. Writer: Charles Soule. Artist: Ryan Browing. Color Artist: Edgar Delgado.
One thing is for sure, Charles Soule can write the heck out of an Inhumans story. Even though he writes the monthly Inhuman series, the darn thing never comes out, so it’s a pleasure to see him writing an Inhumans feature in Original Sins. The story is loosely based on the events of Original Sin, with some regular dude dying in the heroes’ battle with the Orb and becoming absorbed into a strange and interesting new Inhumans character, a purple dude named Lineage who is able to absorb the spirits of anyone with a familial connection to him. Cool power, cool story, featuring a cool battle between Black Bolt and a regiment of Kree soldiers that could mean some big things afoot in the monthly Inhuman series, if it ever comes out. I enjoy the Inhuman series so I dug this, although I must admit if I didn’t read the monthly, I would have no idea what’s going on here. Soule clearly has a flare for these characters and this was a fun little story.
Grade: A-

Young Avengers. Writer: Ryan North. Artist: Ramon Villalobos. Color Artist: VC’s Clayton Cowles.
Well, the Hood and the Young Avengers sure sit around a kitchen and talk about building a Cerebro. There’s a great deal of handwringing by the Young Avengers kids over whether or not they should help the Hood, a known master criminal. North writes a great Hood and some snappy dialogue, and Villalobos has a good cartoony vibe and it all adds up to a story that reads well, that looks great, but nothing happens. Like, at all. They don’t leave the kitchen and it’s barely tied to Original Sin. The whole thing is a bit too hip for the room and while it matches the vibe of the previous Young Avengers series, it would be nice if the story moved to a point where it’s actually a story rather than a vignette.
Grade: C

J. Jonah Jameson. Writer: Dan Slott. Artist: Mark Bagley. Inker: Joe Rubinstein. Colorist: Paul Mounts.
Two pages, one newspaper publisher that hates Spider-Man, and one hilarious secret that would expose Jameson as a giant phony. I’m not going to kill the punch line, but this is some funny stuff. It can’t be easy to write these two page Original Sin zingers, but Slott nails it.
Grade: A

A good Inhumans story, an awesome little Daily Bugle strip, and a Young Avengers misfire for a total grade of B. 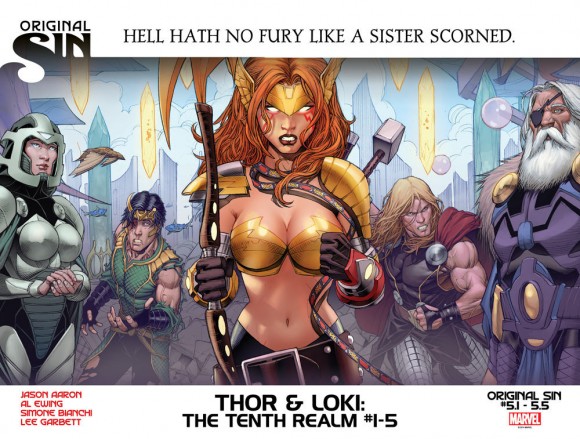 A Thor and Loki story that spins out of an event, that has to be epic, right? Especially when it’s delivered by regular Thor writer Jason Aaron and monthly Loki: Agent of Asgard scribe Al Ewing? Well, Thor & Loki#1 does not disappoint. After the events with the Orb and the Watcher’s eye, Thor learns the secret that he has a sister. This sets up a unique situation as Marvel gets to establish that Thor’s sister is none other than former Image character and Neil Gaiman creation Angela. I say, when you can incorporate a piece of Neil Gaiman into your shared universe, do it, and Marvel is doing just that. The book has the same grandiose feel as Aaron’s Thor but with the personal flavor of Ewing’s Loki. The book should appeal to fans of both titles as fans will meet the residents of the lost Tenth Realm, a realm of angels. This is mythic Marvel at its finest. Some fans moaned when it was revealed that Angela will be hammered into the world of Thor, but Ewing and Aaron make it work with some gorgeous art from Lee Garbett and Simone Bianchi who bring the newly created Tenth Realm to life.
Grade: A- 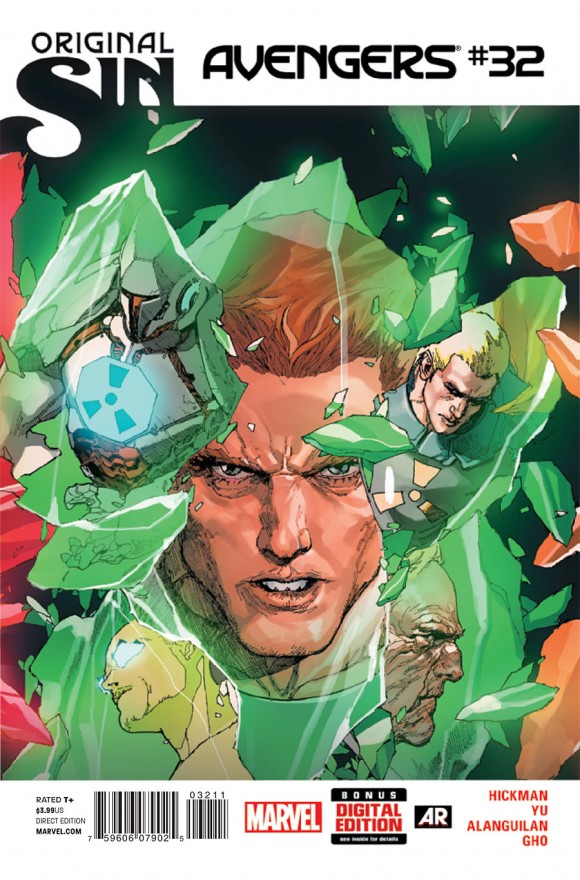 Once again, Avengers is not tightly connected to Original Sin, but somehow, it is actually bigger than Marvel’s grand crossover event. The issue deals with Captain America, Black Widow, and Starbrand thrust into the very distant future and meeting Franklin Richards who shows the trio of Avengers the consequences of the Avengers’ actions in the present. First off, it’s great to see Hickman reunited with Franklin Richards, a character he clearly loves from the writer’s run on the Fantastic Four. The issue is all concepts. Concepts of the future, of timelines and alternate reality, of imaginary physics and choices, and it all works. It’s a great deal of conceptual dialogue and mind-bending ideas of time and space, but man, is it all gripping. It’s so trippy, that there was a danger that a reader could get lost, but not with the artwork of Leinil Francis Yu as a guide. Yu brings the impossible to life with each Avenger playing a unique role from Cap as the stoic champion, to the Widow as the cynical warrior, to Starbrand as the wide-eyed newbie. 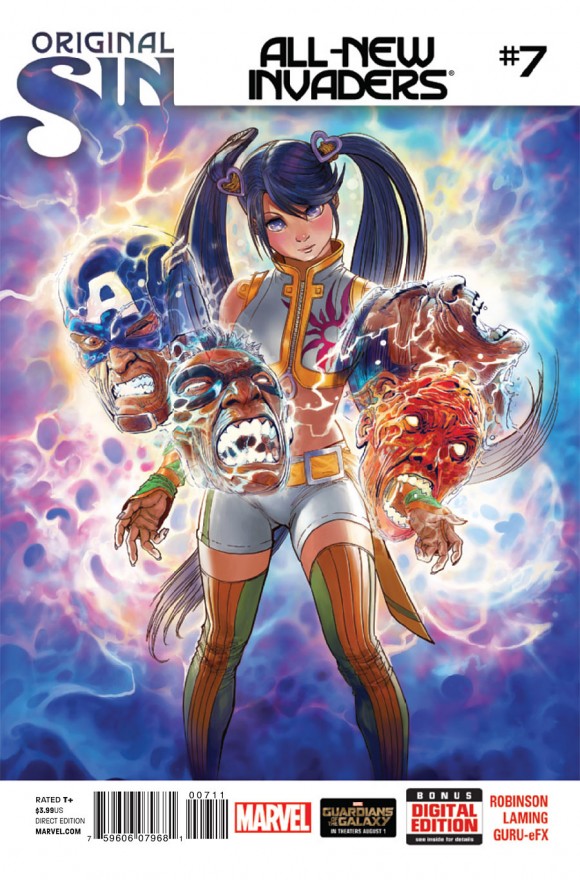 All-New Invaders #7. Writer: James Robinson. Artist: Mark Laming. Colorist: Guru-eFX
Talk about a love letter to Roy Thomas, the grand master of all things Golden Age. James Robinson used the Original Sin event to reveal that the Invaders could have stopped the two atomic bombs that were dropped on Japan at the end of the Second World War. It’s a dark moment of the Invaders’ past and a moment that affects the original Human Torch. This book is becoming the Torch’s book with so many of his teammates busy in Original Sin proper but Robinson takes his protagonist and crafts a story that spans decades while giving the Marvel Universe a great new character, the Japanese hero Radiance. Any fan of the old school Invaders will love this issue, though for a new fan it might be a bit confusing as the Captain America and Bucky featured in the flashback are not Steve Rogers and Bucky Barnes but their replacements who wore the uniforms after Cap was frozen and Bucky was Winter Soldiered. 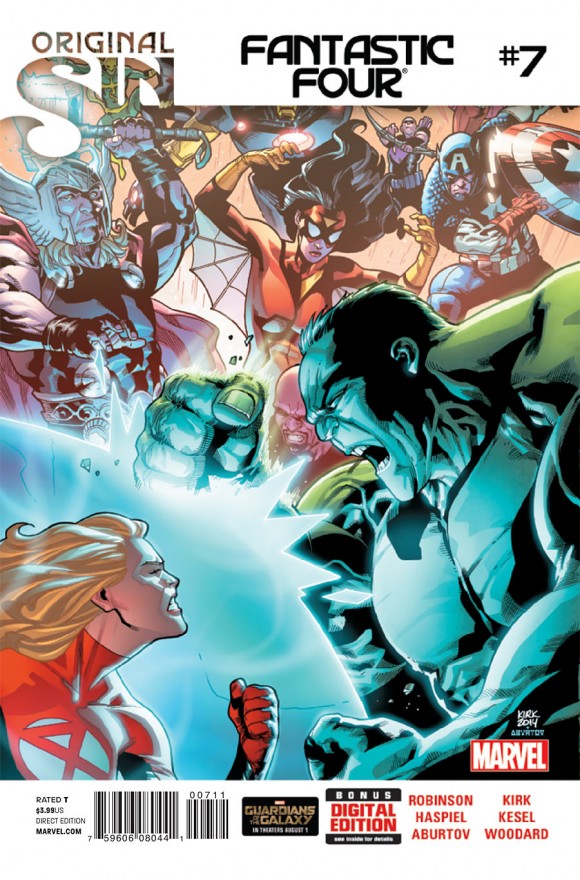 Another more direct tie-in to Original Sin, this story deals with Johnny Storm’s dark secret. I said last time that the FF’s sin being a prank by Johnny on Ben is predictable and uninspired, and it remains so, but the whole thing allows Robinson to explore the family dynamic of the Four. The way Reed redirects Ben’s anger toward himself and absolves Johnny was some powerful character work by Robinson. Plus, Reed’s uncharacteristic anger was handled well and surprising. It may feel like you read it before, but Robinson pulls it off. Uninspired but well executed.
Grade: B-