This Week in AXIS: Marching with MAGNETO

Home » REVIEWS! » This Week in AXIS: Marching with MAGNETO

Our new weekly Marvel event wrap-up — THIS WEEK IN AXIS — launches in earnest with Magneto #9, as the March continues! 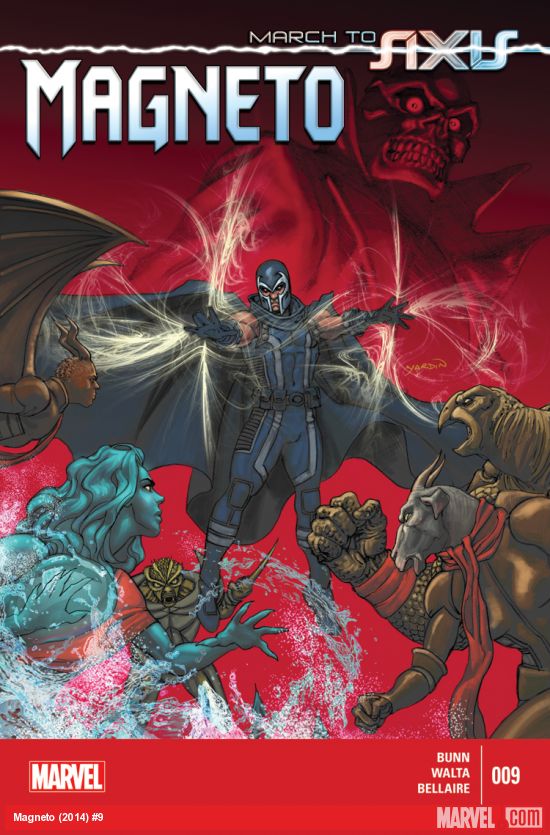 I guess anything leading up to Axis that includes the Red Skull will be considered an Axis crossover. Whatever the case, Cullen Bunn pulls off one hell of a character piece on Magneto. In this issue, Magneto flashes back to his time in a Nazi camp while trying to liberate a mutant death camp in Genosha. Bunn juggles many different plot points, the Genoshian camp, Magneto’s first attempted murder during his youth, and the shocking discovery that the Skull is actually using Charles Xavier’s brain are all covered. In lesser hands, this issue could have been a muddled mess, but Bunn keeps the metal plates spinning. Magneto’s reaction to the Skull possessing Xavier’s brain was suitably horrifying and appropriate but it is in the flashbacks where Bunn’s mastery of this character is particularly strong. In the Nazi camp, young Magneto is as vulnerable as he is regal in the present, and somehow, Bunn moves that vulnerability to the present by having the Skull’s S-Men take down Magneto in Genosha. The issue is riveting — and Bunn’s creative marriage to Magneto is one of the strongest character/creator bonds currently published. This is a perfect thematic follow-up to the film version of Magneto, with incredible art by Walta. If Axis is anywhere near the quality of this issue, we will be in for one killer ride once the March to Axis ends, and the actual event begins.