It’s coming! You can’t stop it! It’s the MARCH TO AXIS! Our weekly wrap-up! This week it’s Uncanny Avengers #24. 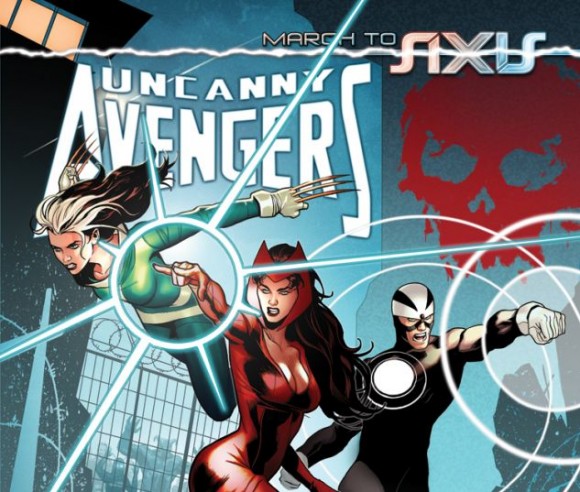 Rick Remender moves the March to Axis forward in earnest with the capture of Havok, Scarlet Witch, and Rogue by the Xavier-brain-fueled Red Skull in an issue that establishes the tone of the upcoming event. Most impressive is the way Remender juggles character point of view. The book starts with Havok’s perspective, morphs into Wolverine’s, and ends with Rogue’s. Through it all, Remender proves he can write each character’s distinct voice and fully display each character’s fear and inner strengths. As for the story, our three central characters are captured by Red Skull’s S-Men and placed in a very disturbing mutant concentration camp. Already there was Magneto setting up a very familiar struggle for the Holocaust survivor. The Skull is everything that Magneto loathes about humanity. To Magneto, all humans have the capacity to be the Red Skull, and the Skull’s actions just prove Magneto right. Of course, for two years now, Skull has possessed the brain of Charles Xavier, and when the former Nazi calls Magneto “old friend,” the effect is chilling. Not everything Remender tries is a success in this issue; an unconscious Rogue is visited by a vision of Xavier with the top of his skull removed. The effect is needlessly grotesque and really takes away from the beauty of the scene of Rogue reuniting with the man she considered a father. Yes, it drives home just how profane the Skull’s actions were but the visuals distract from the well-crafted character moments. It seems shocking for shock’s sake and does not fit in with the rest of the issue. But overall, it was good, with the always delightful Salvador Larroca on art. Every time I read a Larroca comic, I marvel at what an intense storyteller he is.