This Week in AXIS: It’s Here!

So read on already! 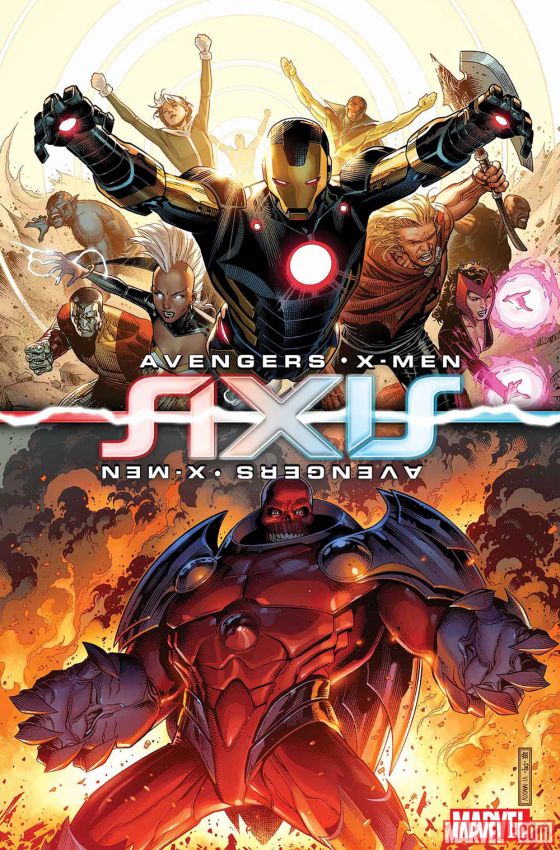 The March is over and the Main Event is finally here as the X-Men and the Avengers must team up to take down the newly born Red Onslaught. Let’s start with the bad. First off, if a fan has not been following Uncanny Avengers or Magneto, they will not know what the heck is going on. Axis #1 is laden with continuity beats that are not inclusive to the fan just wanting to jump on board Marvel’s latest event. Secondly, there is no real explanation to the concept of what Onslaught is.

Fans of the ’90s know, but it’s almost 20 years later, and Onslaught is a continuity blip never experienced by a modern reader. As far as this story tells us, it’s just some kind of weird giant Red Skull with some kind of strange connection to Charles Xavier. The battle with the Skull is overwrought and hysterical with the giant yelling at the heroes and saying nasty Nazi things. The villain didn’t have the menace Remender intended.

Nevertheless, this doesn’t make Axis a subpar reading experience. Somehow, Remender crafts a story that has the feel of an old-school Avengers tale and a classic X-Men adventure. Both teams get the spotlight as Remender explores the subtle differences between the squads. If you’re sick of heroes that are at odds with each other, this book is for you as the Avengers and the X-Men work as a unified front to kick some bad guy butt. The story deftly switches POV, as characters like Scarlet Witch, Rogue, Cyclops, and Havoc all get great individual moments. And Remender’s use of Sam Wilson’s Captain America is a joy to behold. Still, the ending morphs into yet another “Tony Stark sinned and now he must pay” bit of tiresomeness, but I’ll judge that later.

For now, Axis has gotten off to a fun start with a classic feel, even if the menace seems sadly typical. And the Adam Kubert art! Kubert jams his panels with frenetic energy without getting muddled; each of his characters has a distinct visual personality that allows for the story to unfold clearly.