This Week in AXIS: Bring on the Bad Guys!

Home » REVIEWS! » This Week in AXIS: Bring on the Bad Guys!

They’re bad to the bone! Three reviews this week for three Axis books! 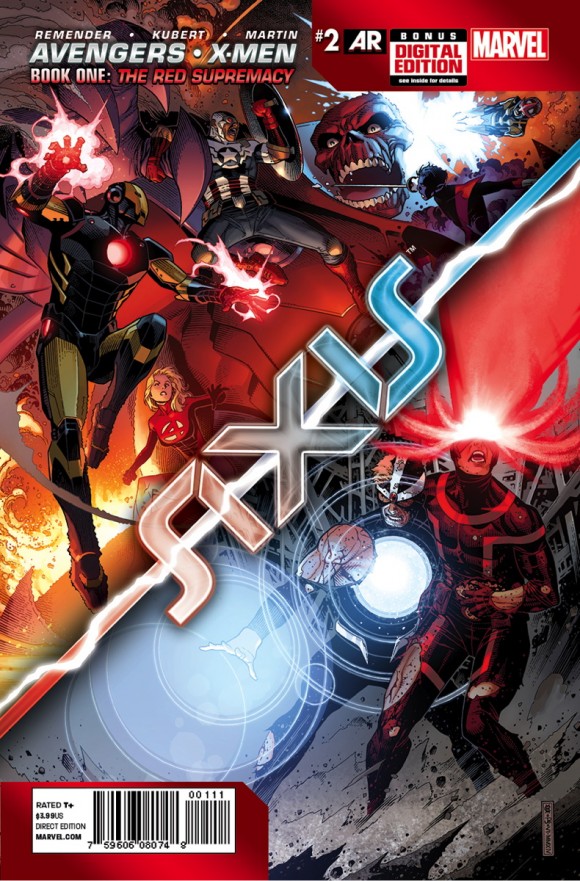 Avengers X-Men Axis #2. Writer: Rick Remender. Artist: Adam Kubert. Color Artists: Laura Martin & Matt Milla.
OK, now that ending rocked. One little writing trick that Remender has perfected is the shifting POV of his immense cast. It feels like you’re reading a number of different titles in an issue of Axis the way the writer juggles his players’ perspectives. Issue #2 starts with a pretty gripping Iron Man story with Tony Stark struggling to defeat his own inventions — two Stark-tech driven Super Sentinels. It’s like Stark is doing battle with his own sociopathic ego as the heroes of the Marvel Universe fall before his forgotten creations. The title shifts to the POV of Havok who is the heroic representative of the mutant contingent. Of all the leaders of the mutants, Cyclops, Magneto, and himself, Havok has the purest of intentions. While Cyclops fights for redemption and Magneto fights for vengeance, Havok fights for his world. There are some cool moments involving Rogue, Scarlet Witch, Wasp, and the Sam Wilson Captain America that really make this issue fun to read. Yet, through all that, it is just one big battle with the Red Onslaught standing there while the heroes fail to make a dent. This issue is character driven as the plot really doesn’t go anywhere. But the character work and the ending justify the $3.99 price tag as Axis continues to deliver the goods. The glue that holds all this disparate action together is the talent of Adam Kubert, a man who knows how to deliver action. The color work is awesome as well, as a palette of reds and oranges makes everything seem like the world is burning.

The superb Axis color work continues in Magneto where we find out how that ending of Axis #2 came about. Bunn is still delivering a solid title despite the crossover interruption. This issue focuses on the fundamental differences between Magneto and the rest of the master villains of the Marvel Universe. Magneto may be the only man who has what it takes to save the world from the Red Skull, but to do so, he must overcome his own regrets and demons. Bunn crafts a character who will compromise his own morality to save his people. This issue is a nice character study on the Master of Magnetism even though the issue breaks no new ground if you already read Axis#2, as it serves primarily as a long-form explanation of an Axis story beat. Fun but non-essential. For $3.99, a book better be essential.

Not much Loki in this one till the end, but Ewing does tell one hell of a Dr. Doom story, as he has the Monarch of Latveria respond to the threat of the Red Skull. This issue is what a crossover should be, a book that takes the events of the core event title and examines how it affects characters and places removed from the moment. Doom does play a part in Axis and this is how he gets there. Loki seems to play second fiddle even though he plays an important role at the end. The breakout star of this issue is Verity Willis, a human girl with the power to detect lies. She is a great POV character and hopefully future issues will examine her more as Loki’s loyal friend and ally. The art seems a bit rushed and sketchy, but what do I know? The Axis event seems to have displaced Loki in his own title a bit, but if you want a fun Dr. Doom story, here it is.