THEN & NOW: Tony Isabella on His Return to BLACK LIGHTNING

Home » COMICS HISTORY » THEN & NOW: Tony Isabella on His Return to BLACK LIGHTNING

Black Lightning: Cold Dead Hands is out this week. 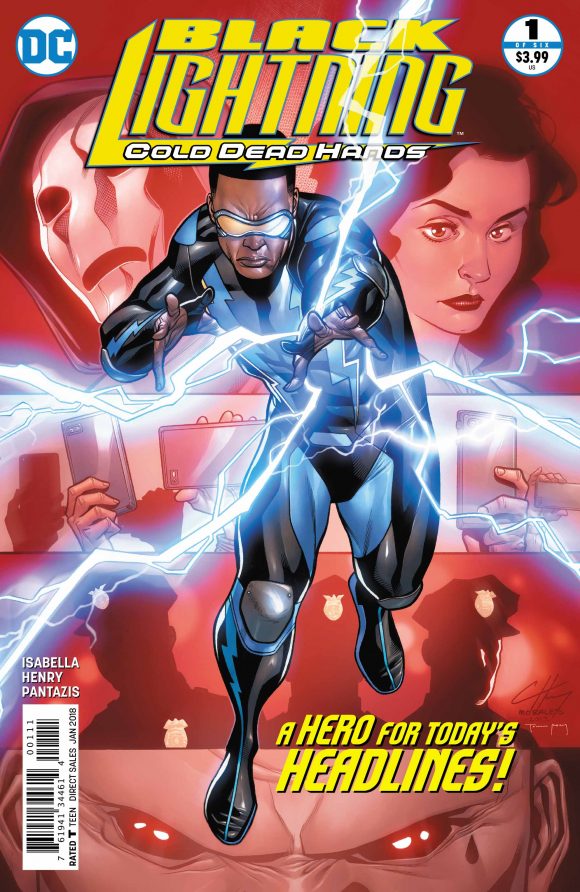 Black Lightning is celebrating his 40th anniversary this year and the DC superhero is returning to the stage in a big way:

Creator Tony Isabella is returning to his creation with a new 6-issue miniseries — Black Lightning: Cold Dead Hands — and the CW is adding to its roster of supershows with a series starring Cress Williams as the title character, set to debut in 2018.

This is Isabella’s third time on Black Lightning, beginning with the first series in 1977 that featured pencils by Trevor Von Eeden, and then a second go-around in the ’90s. His return is especially significant for comics fans: He long had an icy relationship with DC over credit and rights — the official credit is now “created by Tony Isabella with Trevor Von Eeden” — but the two sides have mended fences. 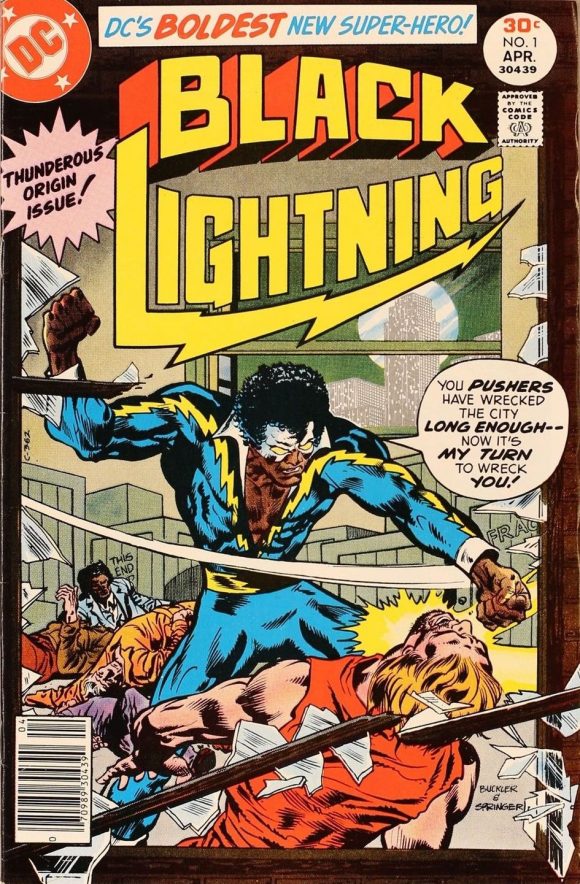 Now, Isabella says, he’d like to stay for good.

Black Lightning: Cold Dead Hands #1, with line art by Clayton Henry and color by Pete Pantazis, is out 11/1 — check out the preview pages below — and Isabella has lots on his mind about what’s changed about Jefferson Pierce, what hasn’t and what the future holds. 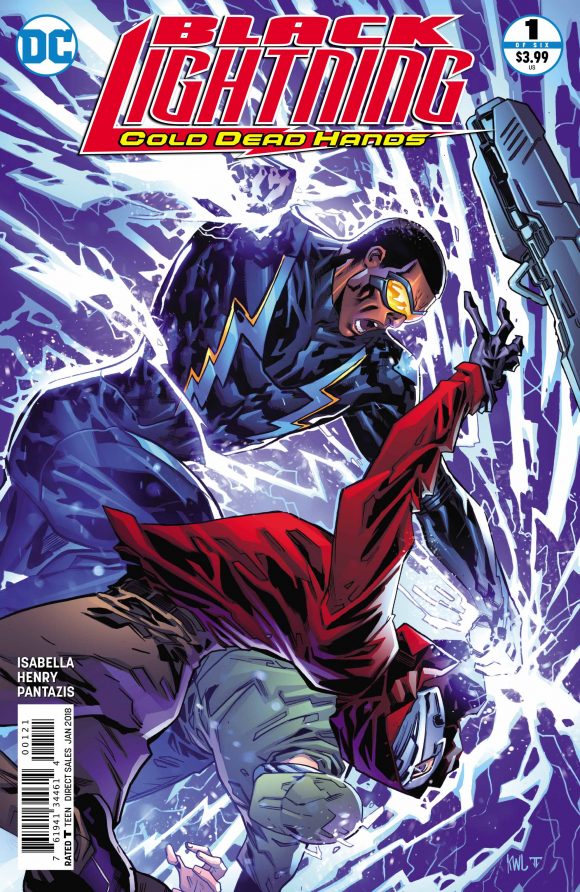 Dan Greenfield: It’s been awhile since we’ve seen Black Lightning. What’s different from the last time we saw him—and what’s the gist of this story?

Tony Isabella: This is a kind of, sort of reboot of the character. In this series, and in the future series I hope to write, he’s younger than I’ve ever written him before. He’s still a former Olympic athlete and schoolteacher, but he’s around 28 years old. He has an actual family (father, grandmother, cousins) which is something he’s never had before in my Black Lightning stories. He’s living in his hometown of Cleveland, which he returned to so that his dad could spend his last months of life with his family and old friends. This isn’t an origin story—that might come later—but Jefferson Pierce has not been active as Black Lightning for a couple years as this series opens. He’s never been married. He’s not yet met Lynn Stewart, but he will before the end of this 6-issue series.

The core values of Jefferson Pierce remain intact. He is a man of faith and a reluctant superhero. But he knows his special powers and abilities come with an obligation to use them for the benefit of his community and his city. He is a great teacher; the kind who inspires students. He is a thoughtful man who considers what he’s about to do before he acts. He’s always learning new applications for his powers, sometimes with the help of the other family that he builds around himself. I think he’s smarter than any other version of Black Lightning in the DC comic books.

The overall theme of my Black Lightning work, now and in the hoped-for future, is real-world issues in a superhero universe. In this series, the main issue is gun violence and the proliferation of increasingly deadly weapons. But it also touches on good and bad cops and the “Them vs. Us” mentality held by too many police officers. 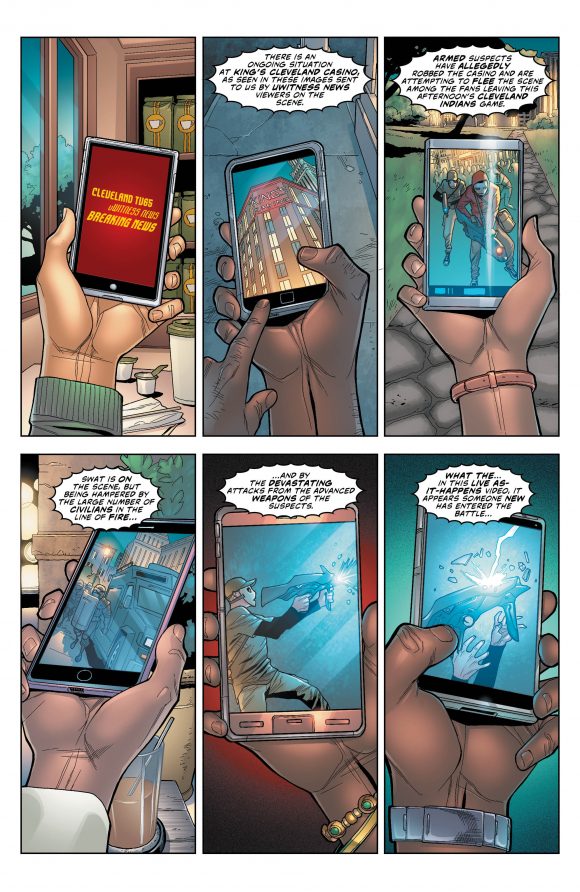 Dan: Was this story something you’ve had in mind for a while, or did you brainstorm it after you and DC made the deal for you to return?

Tony: I’ve always wanted to return to Black Lightning and, as in my 1990s series, always intended to continue writing about the real-world issues facing him and his community. When Dan DiDio asked me if I wanted to write a new Black Lightning series, I agreed, then asked which version of the hero he wanted me to use. I was told I could do anything I wanted. What I wanted to do was discard 40 years of (sometimes conflicting, confusing) continuity and do things with Jefferson that I had never done before. Black Lightning: Cold Dead Hands is not really part of DC’s Rebirth event, but it does draw some inspiration from the great stories that have come out of that event.

Dan: In any event, what’s it like returning to the character for the first time in more than 20 years?

Tony: Like coming home. Jefferson Pierce is my proudest creation. He has touched more readers more deeply than anything else I have done. I have always said I wanted to write Black Lightning stories up to the moment they pry my keyboard from my — ahem — cold dead hands. If this new series and the TV series are as successful as we believe they will be, that could turn out to be the case. 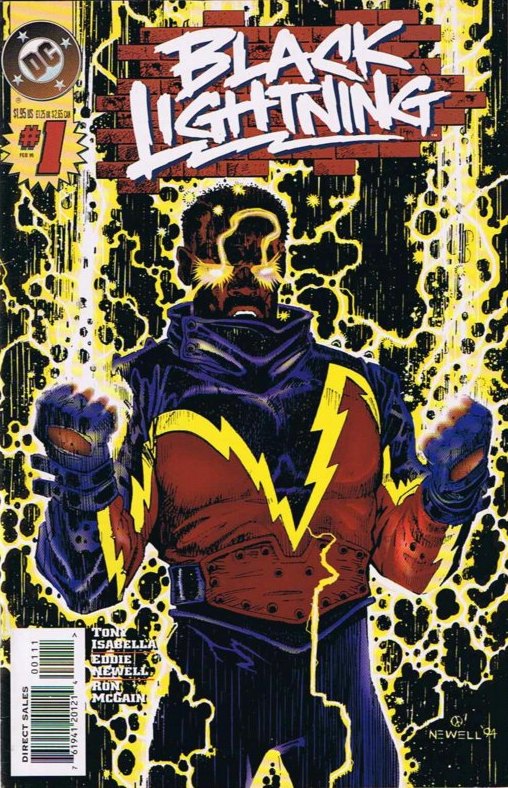 Dan: How is it different approaching Jefferson Pierce now compared to 40 years ago, when you first created him?

Tony: I’m a better and more knowledgeable writer than I was back in 1976. I’ve more strongly embraced the wondrous diversity of our world and our industry. I’ve learned more about comics writing and that world. I never stop learning. I gain insights from the people I meet. I think things through better than I did back then, but I keep the process loose enough so that I can still surprise myself. I didn’t see the ending of this first new issue coming until I was a page or two away from it. There’s a scene in the third issue in which you discover surprising stuff about two supporting characters and I didn’t see that coming until I sat down to write the page where it happens.

Dan: In terms of race relations, the 1970s were a different time, though a lot hasn’t changed societally. In certain important respects, you could argue that things are worse in the current climate than they were in 1977, when Black Lightning debuted. How much will today’s racial politics play into this new miniseries?

Tony: If by “racial politics,” you mean the systemic racism that can be seen in the White House, in our courts, in the legislation enacted by federal and state government to suppress voters, and in our law enforcement agencies, then, yes, it will play into my 6-issue series and likely any other Black Lightning series or stories I write. How could it not? The racism and bigotry infecting our country is a crisis of heart, mind and soul for this country. If we do not overcome them, we will never achieve the American dream of equality for all. 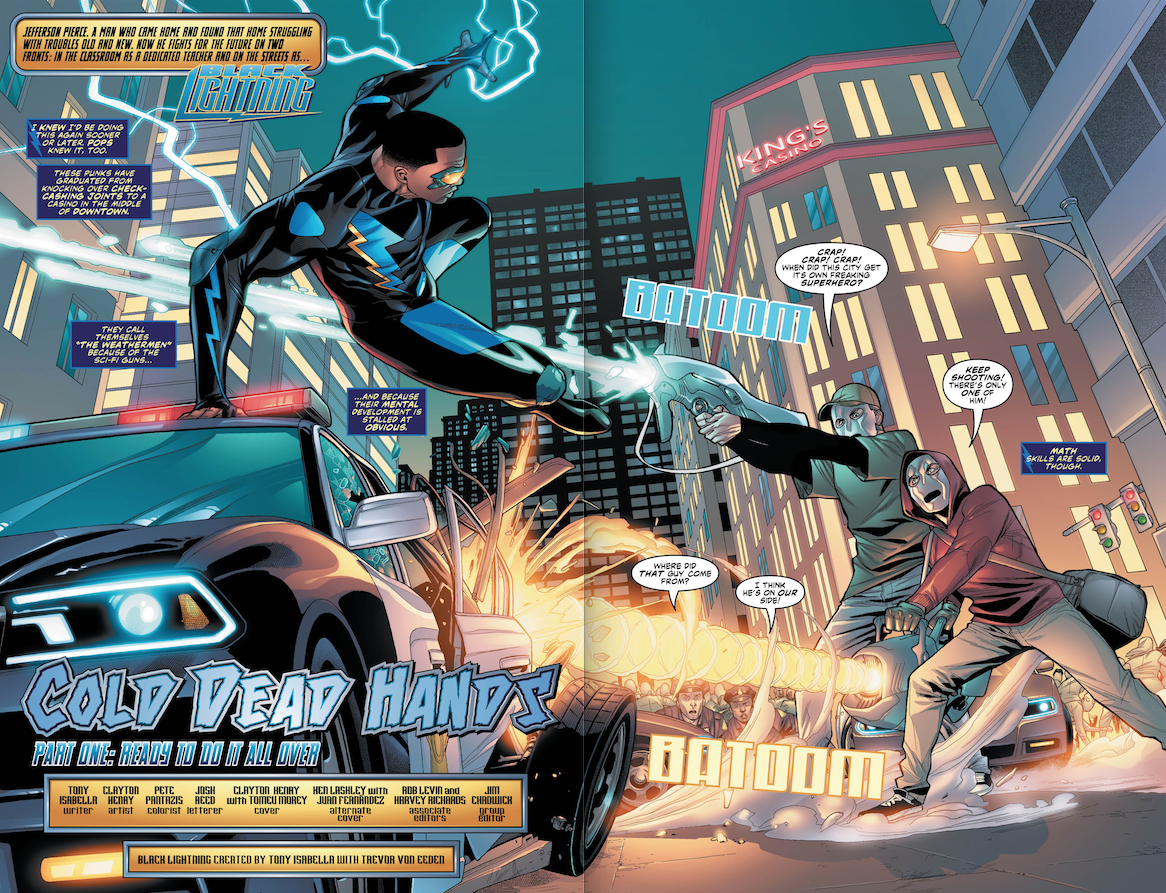 Dan: You have a complicated relationship with DC Comics where Black Lightning is concerned. How did you patch things up and why was now the right time?

Tony: It was the right time and the right people. I’ve been treated with great respect by Geoff, Dan DiDio, Salim and Mara Brock Akil, Jim Chadwick and everyone I’ve worked with. I’m enjoying working with the company and I think I’ve been of some service to DC beyond my actual writing.

DC’s current management, starting with Geoff Johns, reached out to me. We talked about this and that. Early on, even before we had any signed agreements, we knew we wanted to work together once again. The first thing I was asked to do was write a short paper on Black Lightning’s core values. That seems to have been the guiding light for everything happening with the character. 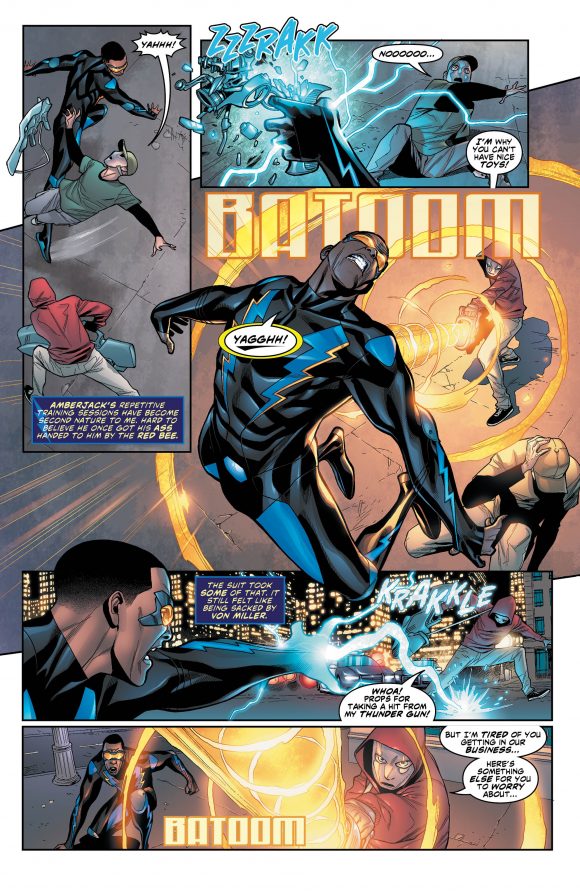 Dan: What’s your involvement been in the upcoming TV show?

Tony: I have no official role in the TV show. That said, DC set up a conference call between Salim and Mara and me. They asked a great many questions that I did my best to answer. They gave some insight into what they planned. I took to them and their terrific ideas from the start. I am available whenever they need my help on anything. I love this series and want it to be the huge hit I think it will be.

Salim flew me out to Burbank to meet with the TV series writers and it was one of the most wonderful moments of my life. On one wall, the 13 episodes of the first season were roughly blocked out and I saw a lot of myself on that whiteboard. On the opposite wall, they had drawings of characters, photos of actors cast for some of the characters, and a list of other characters who may or may not be in the series. A lot of those were mine as well.

Then, in talking to the writers and answering questions about the comics I had written 40 and 20 years ago, I realized they’d not just read my work but had studied it. More, they are bringing great new ideas to the series.

Salim showed me the full presentation piece that had been done for the CW — the trailer came from this — and I fell in love with the show and the actors. Cress Williams is so great as Jefferson that I feel like I know him well. We’ve exchanged a few messages along the way.

If I have an unofficial role with the show, it’s head cheerleader. I’m excited about the series and have told all concerned I will be there for it whenever they need me. There’s been discussion of my coming to the set to meet the cast, see the show being filmed and do some publicity. I can’t wait. 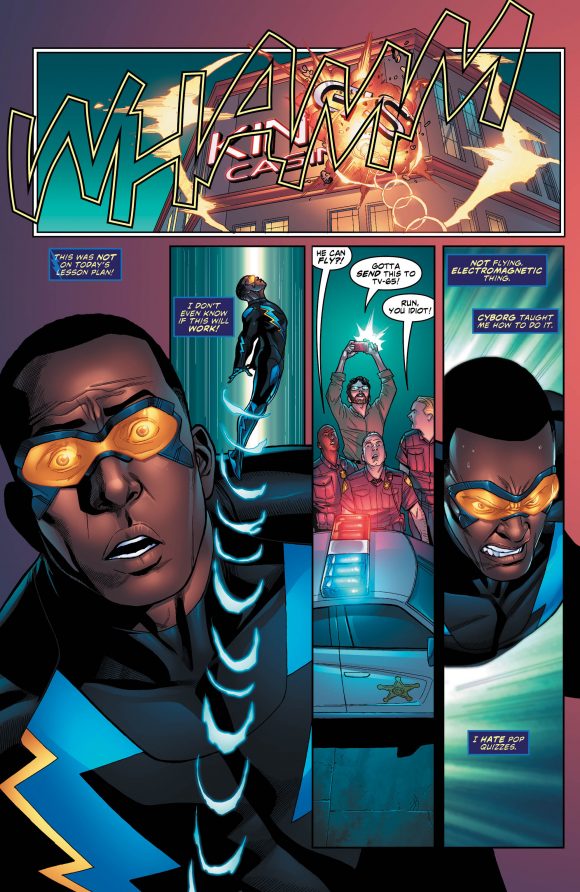 Dan: Don’t you miss that original costume? I do!

Tony: Nope. The original costume was fun for its times, but I’m a 2017 guy. We must move forward, but, of course, move forward while maintaining the core values of Jefferson Pierce and his other identity. Even though the new comics series and the TV series have different versions of my creation, at their hearts and souls, they are the same amazing hero.