If you were a comic-book fan in the 1970s, you had to get to used to the idea that any live-action adaptation of a beloved superhero property would be… a loose adaptation, at best. In the dark days between the 1960s Batman TV series and 1978’s Superman, Hollywood was so sure that audiences would not be able to tolerate wall-to-wall (or, more specifically, commercial-to-commercial) superhero action that they tended to jam whatever character they were adapting into more traditional TV templates. 1974’s Wonder Woman TV movie might represent the Platonic ideal of this philosophy.

Wonder Woman, which aired on ABC on March 12, 1974, was written and developed for television by John D.F. Black, who had a long career in the medium (Mission: Impossible, Star Trek and, later, Charlie’s Angels). It stars Cathy Lee Crosby, a former tennis pro transitioning into acting, who nabbed the title role in a TV movie that was intended as a pilot for a series.

Amazingly, even though the character had been around for over 30 years, this was her live-action debut, and only her third appearance ever outside of comic books. (There was an unaired ’60s TV reel and she was on the Super Friends, of course, but her first-ever televised appearance was in 1972, in the cartoon series The Brady Kids, where the six Brady moppets time-traveled back to ancient Greece, which of course makes total sen… — wait, what?). 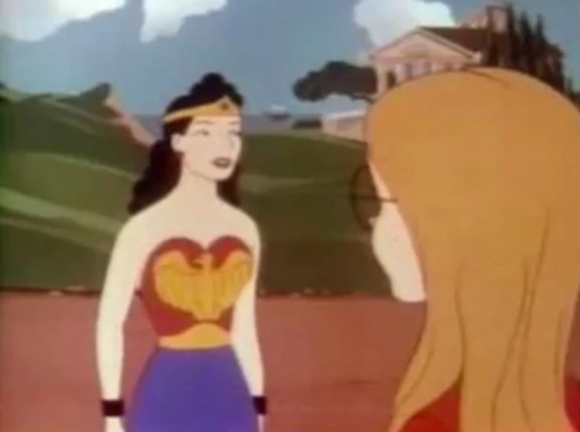 A pre-title sequence shows us various MPs seemingly stealing volumes of top-secret information from different locales (Paris, Istanbul, Berlin, etc.) and delivering them to the very 1970s-ish George Calvin (Andrew Pine), who summarily has his field agents executed by a brother-and-sister assassin team!

Our first shot of Princess Diana (the very blond Crosby) is on Paradise Island, as she prepares to leave her home and enter Man’s World. She bids a melancholy goodbye to her mother Hippolyta (Charlene Holt) and some of her Amazonian sisters, one of whom, Ahnjayla (Anitra Ford) who all but begs to go with Diana, only to be denied (more on this in a moment).

We learn that the whole Paradise Island sequence is a flashback because, after a jump cut that Stanley Kubrick would find ambitious, we find Wonder Woman in the civilian guise of Diana Prince, comfortably ensconced with some sort of government agency, a secretary to Steve Trevor (Kaz Garas), who heads the unnamed espionage-related department. 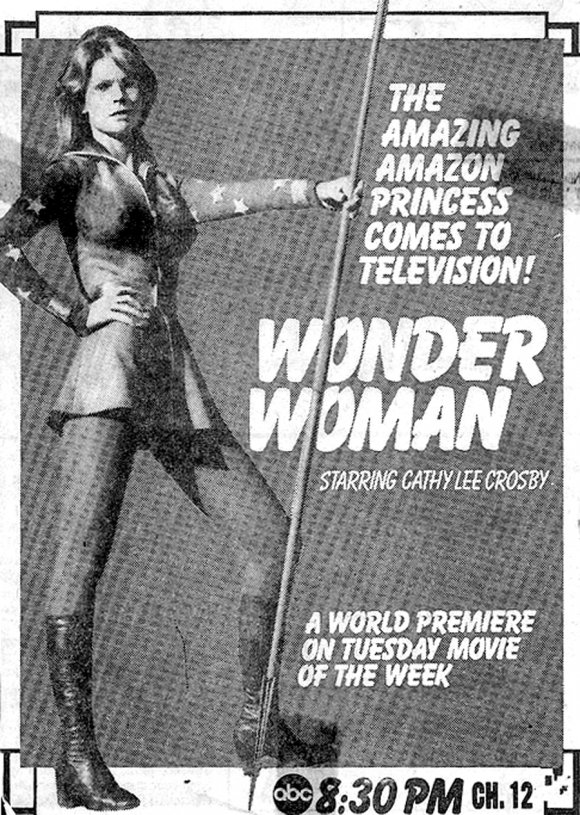 Trevor calls a meeting of the top brass to tell them that the codebooks (seen at the beginning of the movie) have been stolen. Diana, after fending off the creepy advances of one of the agents, overhears her boss’ meeting. Trevor seems to know that Diana is Wonder Woman, or something, because she heads out to find the person who stole the books, with Trevor’s winking approval.

Diana tracks down Smith, starting with a trip to a posh hotel. George Calvin meets her there, and he asks her out, going so far as to say how much he’d like to make love to her(!). Diana takes all this sexual harassment in stride, never wavering from her mission. Like Trevor, Calvin seems to know that Diana Prince is Wonder Woman, immediately spotting her in the lobby.

Crosby is given very little dialogue to say; presumably the producers figured that her background in athletics made her suited to this action-heavy role. But the action scenes are so brief, and shot so perfunctorily, that Wonder Woman is a bit of a void in her own movie. The closest we get to an emotional scene is when she learns that her Amazon sister Ahnjayla has come to the United States and is in on the plot with a man named Abner Smith. 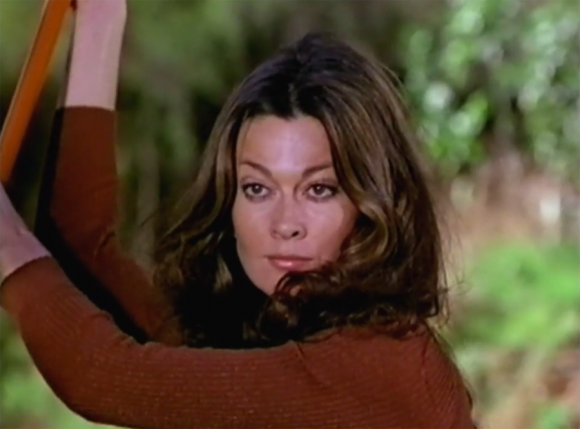 Diana looks genuinely pained when she has to fight Ahnjayla, but the scene is so clearly edited to hide the fact that she is dueling with a stunt woman(?) that there’s little to no thrills. (Ironically enough, Anitra Ford, with her flowing brunette locks and statuesque height, looks way more like the comic book Wonder Woman than Crosby ever does.)

For the first two-thirds of the movie, Wonder Woman never wears any sort of costume, preferring to beat guys up in red slacks. When she finally does put on a superhero suit, it’s a sort of Adidas-style running outfit, though it’s not without its charms. 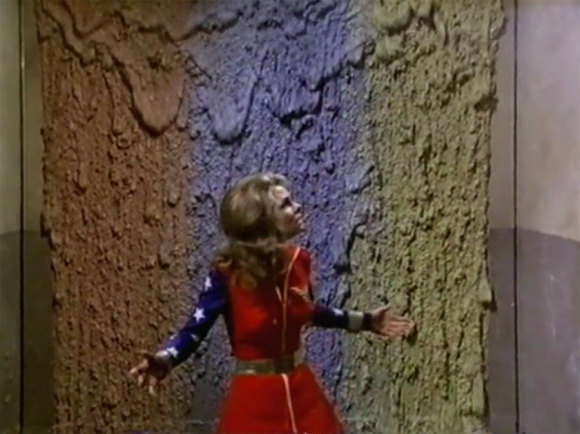 This scene — where Abner lures Wonder Woman out to the desert and then into some sort of weird-ass mudroom, whose walls start to close in like the Death Star garbage compactor — is the only prototypical comic-book moment in the whole movie. Otherwise, it’s pretty much all talk talk talk, even when WW escapes and finally meets Abner.

This big confrontation, where we finally get to see Ricardo Montalban’s face, with Wonder Woman apprehending Smith (SPOILER ALERT), is done in such a low-key, almost comical way that I was scratching my head, wondering (no pun intended) just who this movie was supposed to appeal to: probably way too silly for adults, but too talky and idiosyncratic for kids.

The main worthwhile element to Wonder Woman is not so much Crosby’s portrayal (which is dull, if not bad), but how Diana is written: She is never anything but completely confident in herself and her ability to finish her mission. You get the sense she’s pretty much just humoring all the men getting in her way (which is probably how most women feel on a daily basis), willing to lead them on in one way or the other to get what she needs. I found that quite refreshing, and it helped get me through the endless scenes of George Calvin acting like he was the sexiest man alive.

Another weird touch is the twin assassins. I wonder (sorry again) if the producers had ’70s mime team Shields and Yarnell in mind for these roles at some point, since they would later do a guest spot on a 1978 episode of the Wonder Woman series. I also liked that Steve Trevor never gets involved with the action, staying mostly in the background. This Wonder Woman doesn’t need no saving! 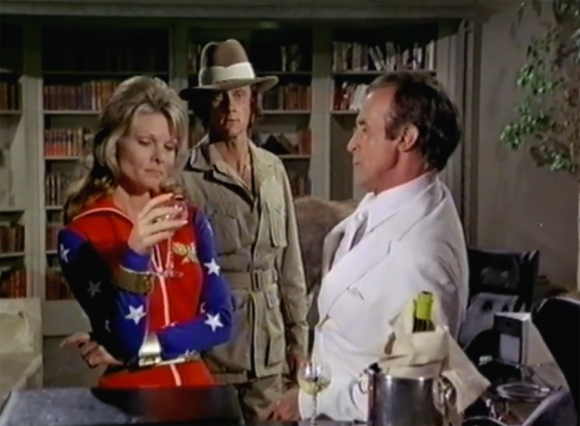 I find it hard to hate on the Wonder Woman TV movie, because it’s not truly bad, just terribly misguided. Basically the whole thing plays like a Bionic Woman episode, and is so far removed from what you’d expect from something called Wonder Woman that you wonder (damn it, I did it again) why she even bothers to put on a costume at all. An even bigger tease comes when Wonder Woman tells Abner about her invisible plane, which we never get to see in action. But, take Diana’s word for it, it’s awesome.

Another strange detail is the constant hiding of Ricardo Montalban’s face — after three or four scenes of random objects blocking our view of him, the whole effect becomes comical. Nonsensical, too, since Montalban is listed in the opening credits, and his voice is so distinctive that there’s no drama or suspense about the reveal: Right from the beginning we know Abner Smith is Montalban, so why is someone holding up a lamp in front of his head? That said, any genre fan knows how effortlessly charming the actor was, so when at the end he says, “Wonder Woman, I love you” it somehow seems suave, not creepy. 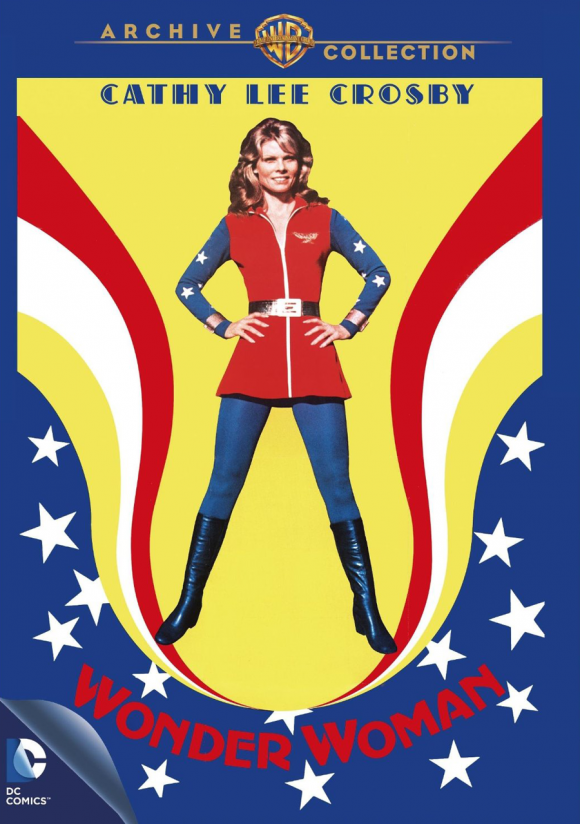 Apparently the Nielsen ratings were mediocre, but ABC had enough faith in the Wonder Woman concept that they commissioned a new pilot, recast the role with Carter, and the rest was history. 1974’s Wonder Woman was essentially forgotten, never released on home video until the fine folks at Warner Archive put it on DVD in 2012. With the Lynda Carter version available so readily, there’s no real justification for tracking this down, other than for Wonder Woman completists.

But who knows? Maybe the next generation of Wonder Woman fans created thanks to the new movie starring Gal Gadot will be curious to see what we ’70s kids had to make do with.

Rob Kelly is a writer/artist/comics and film historian. He is the co-host of Aquaman and Firestorm: The Fire and Water Podcast, the host of The Film and Water Podcast, and the host of TreasuryCast, a show devoted to the greatest comics format of all time, the treasury edition. He had a Mego Wonder Woman doll and was proud of it.