A BIRTHDAY CELEBRATION: The late Steve Gerber was born 74 years ago — and FVL pays tribute… 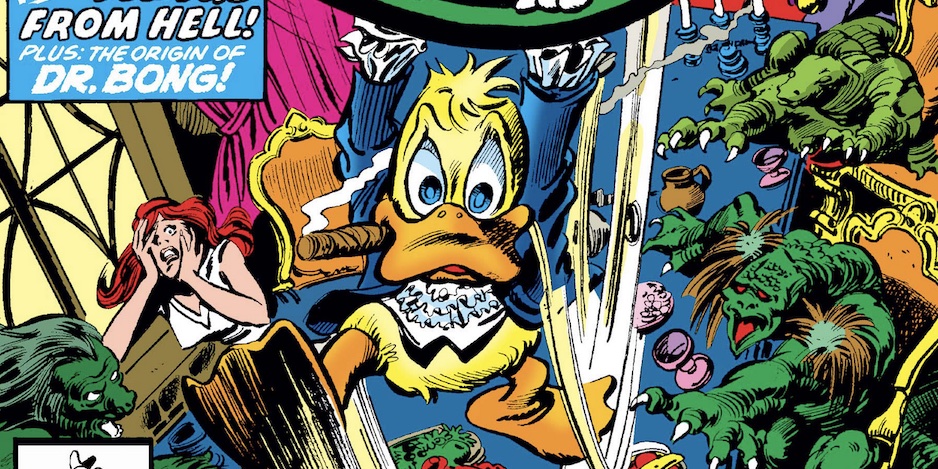 Happy birthday to the late Steve Gerber — born 74 years ago on Sept. 20, 1947 — the great comics scribe who was one of my biggest influences as a writer. I can’t remember why I started religiously collecting his 1970s Marvel work from back issue bins when I was a kid, but at one point I had a complete run of his Defenders, Man-Thing and a personal favorite, the first-ever regular series starring the original Guardians of the Galaxy.

But it might have been because I stumbled across the script to an unpublished mid-1980s Howard the Duck revival he had posted in the comics section of CompuServe (ask your Gen-X parents, kids). As a high schooler I tweaked his format into what became my own scripting style, one I am honored has been adopted by many pros since.

This was of course before I knew of Gerber’s pioneering battle with Marvel over the rights to Howard, the harbinger for many character-ownership fights to come, partly financed by a collaboration with another wronged creator, Jack Kirby. 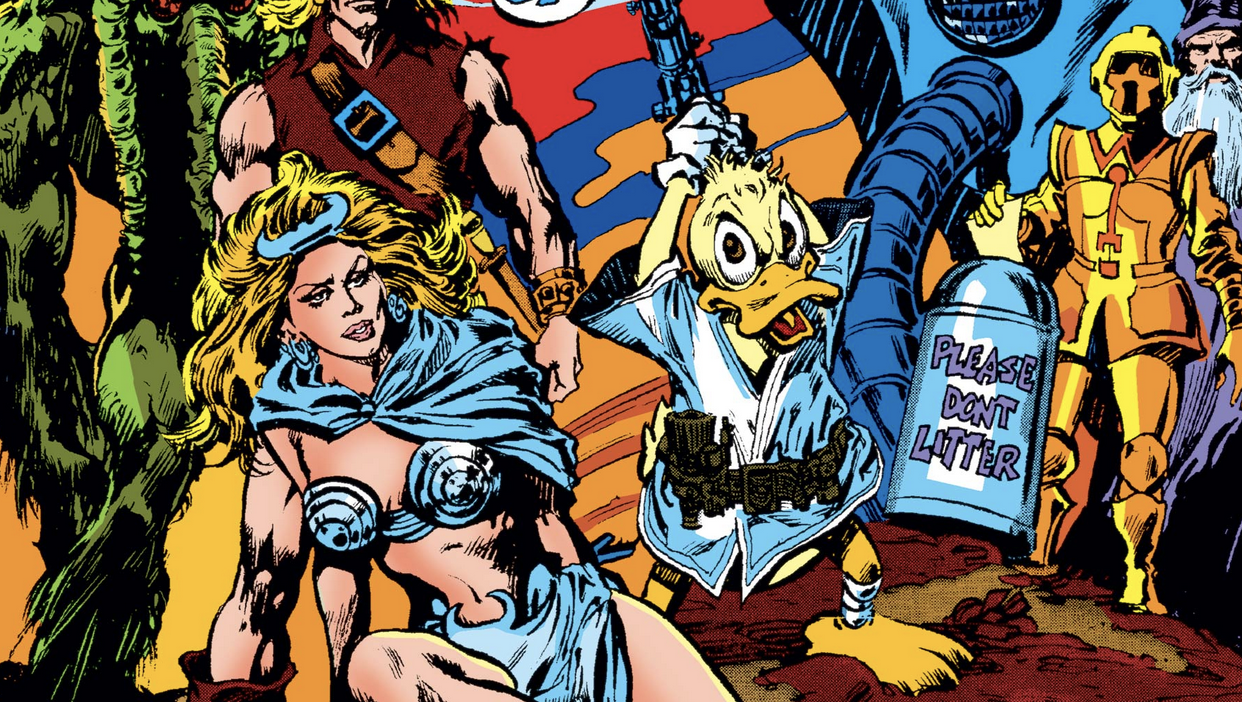 As a kid of the 1980s, I enjoyed Gerber’s ability to weave comedy, philosophical angst, ripped-from-the-headlines social commentary and good old fashioned superhero insanity into an always-readable, if sometimes extremely pretentious (Gerber did an almost-all-text issue of HtD when he was running behind his deadlines that, uh, let’s just say did not make this list) that was a forerunner of the “serious” mainstream scribes—Moore, Miller, Morrison, et al— who would soon catch fire.

And you know, I’ve never actually seen the infamous movie that precipitated Gerber’s lawsuit in the first place? I tried semi-recently and only made it about 15 minutes in.

Between you and me, I think the comics are better.

1. Giant-Size Man-Thing #4: “Frog Death!” Howard’s first solo story gets off on the right (webbed) foot when, upon arrival in our (616) world, he meets up with some human kids and he has to defend them against a weirdo who drinks a magic potion to turn into Garko, the Man-Frog. Fighting Howard excites the Man-Frog so much he turns into a regular frog, which an arriving cop car promptly runs over. They then arrest Howard, of course. Words cannot do this gonzo short justice, and Frank Brunner, the first, great solo HtD artist, kicks ass. One of the great delights of my career was getting Frank to do a faux Howard cover when he (Howard, I mean, not Frank) was starring in Marvel Zombies 5. 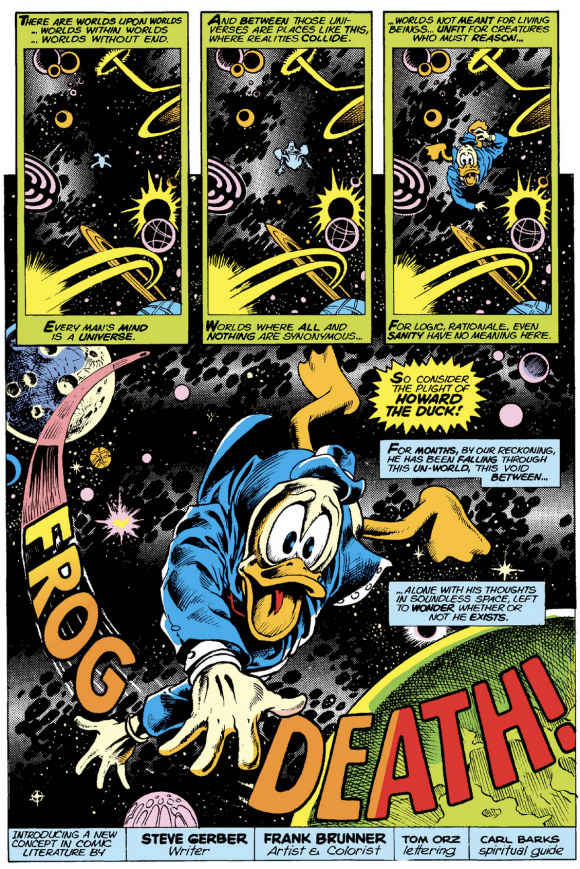 2. Giant-Size Man-Thing #5: “Hellcow!” The solo Howard story in which he battles a vampiric heifer turned by Dracula (yes, really) gets on this list solely because it is the first appearance of the most amazing Stan Lee Presents intro crawl box in Marvel history:

“From the time of his hatching, he was… different. A potentially brilliant scholar who dreaded the structured environment of school, he educated himself in the streets, taking whatever work was available, formulating his philosophy of self from what he learned of the world about him. And then the Cosmic Axis shifted… and that world changed. Suddenly, he was stranded in a universe he could not fathom. Without warning, he became a strange fowl in an even stranger land.” 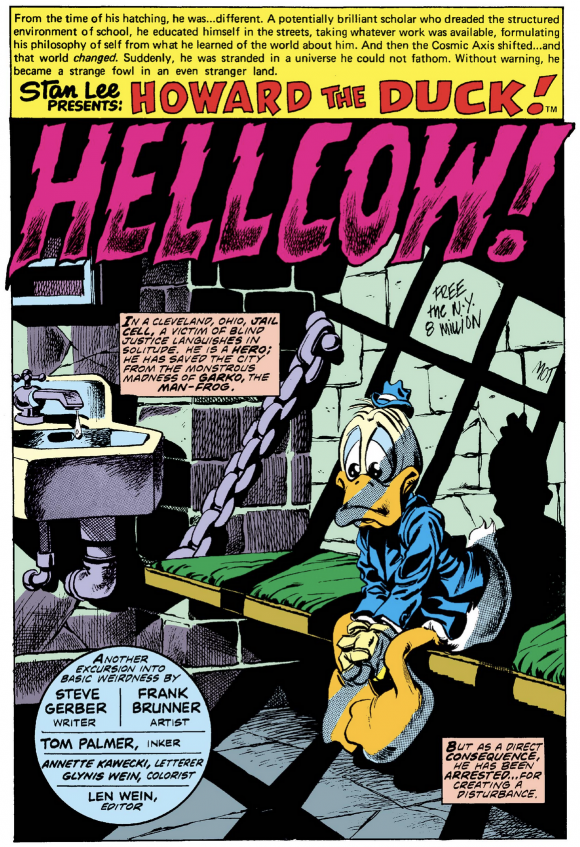 3. Howard the Duck #3: “Four Feathers of Death! or: Enter the Duck!” Not unlike Mad, Howard’s solo title started out parodying genres Marvel was already publishing: The premiere was a lampoon of Conan/Red Sonja, the second issue featured a misguided superhero, and here Shang-Chi gets the raspberry, as Howard has to train in the deadly arts of Quack Fu to rescue gal pal Beverly from some overly testosterone-ed karate thugs. In this issue Howard begins to develop the snarky, cynical, know-it-all personality that endeared him to snarky, cynical, know-it-all readers like me. Coming out of a martial arts movie he is full of moral outrage: “You misrepresent an ancient philosophy, package it as entertainment—and sell it to young people to emulate! >Wecch!<” 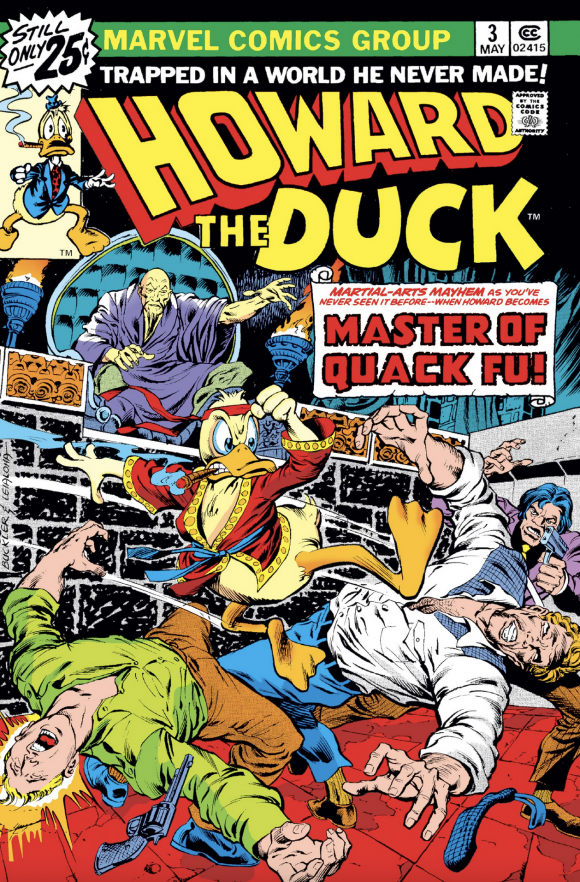 4. Howard the Duck #5: “I Want Mo-o-oney!” One of the perennial themes of the series gets introduced here, which is that Howard and Bev are perpetually broke. I have no doubt that not unlike Fritz the Cat — which premiered in the 1960s but gained bigger popularity with Bakshi’s 1972 film — a big part of Howard’s appeal was a Disney-style funny-animal character dealing with homelessness, paying rent, getting hassled on public transportation, and so on; in other words, an application of the Marvel “superheroes with real problems” applied to the Dell Comics set. In this issue, Howard gets various odd jobs — local TV kiddie show sidekick, repo man, and wrestler–and predictably hates all of them. 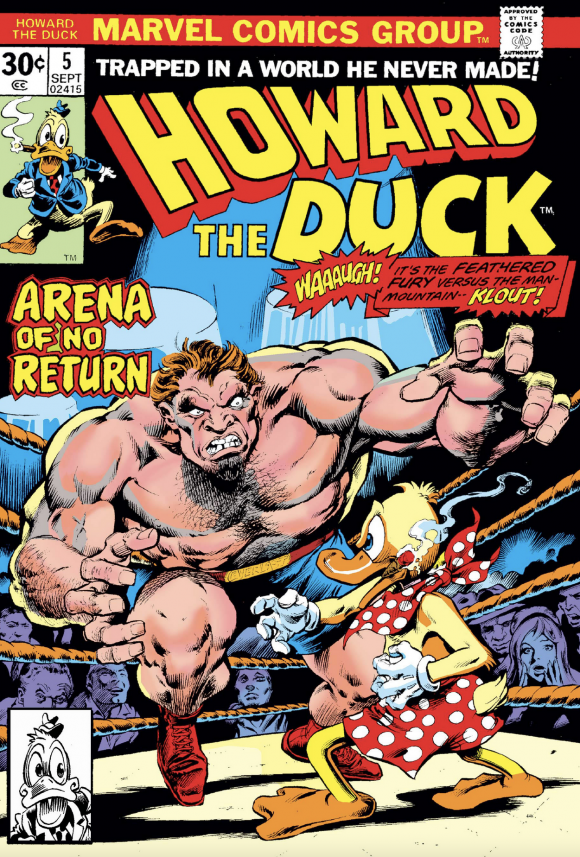 5. Marvel Treasury Edition #12: “The Duck and the Defenders.” One thing I was reminded of rereading my Howard omnibus was that Marvel was really pushing the whole Duck-for-President thing in 1976. (Considering he was running against the only unelected president in US history, maybe they thought a fictional waterfowl had a shot?) It started in the Bullpen Bulletins and letter columns pretty much when the HtD series began. 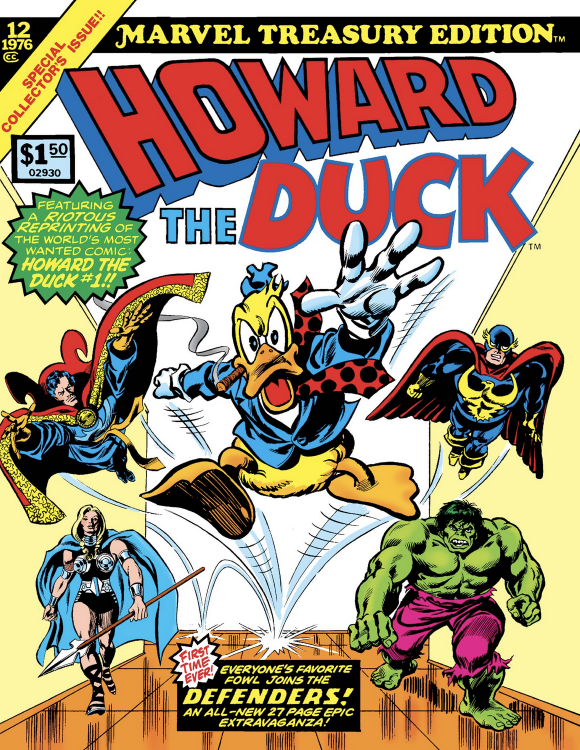 That said, this story is my favorite of the storyline, in no small part because it reunites Defenders stalwarts Gerber and Sal Buscema (inked by Klaus Janson!) to have the Not-Avengers defend the All-Night Party’s presidential candidate from being assassinated by some deeply nutty supervillains.

6. Howard the Duck #9: “Scandal Plucks Duck.” Howard’s candidacy is ruined by a doctored photo of him and Bev bathing together—clearly a forgery, Howard says, because “she hates the smell of wet feathers!” Our heroes head north to battle Le Beaver, the Canadian super-patriot who engineered the smear. (He always uses bellboys in his espionage operations!) His attempt to destroy America by damming Niagara Falls, making the river run backwards, is perhaps his most lucid plot, culminating in a duel to the death with Howard on a tightrope over the torrent in a robotic beaver suit. 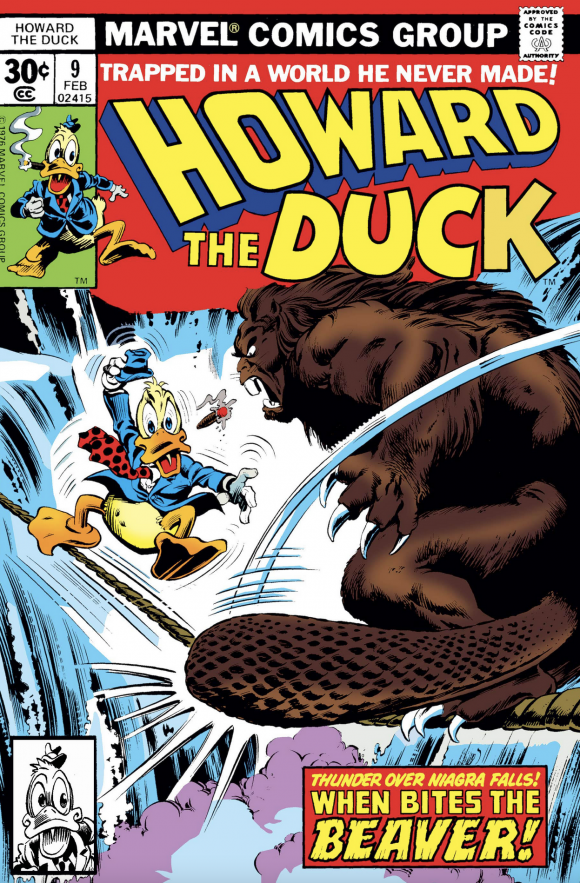 7. Howard the Duck #13: “Rock, Roll Over and Writhe!” Inevitably, Howard has been committed to an insane asylum for thinking he’s a duck, which, of course, he is, meaning he has no way to prove his sanity. Separated from Beverly he picks up a new gal pal in the looney bin, the Elmer Fudd-accented Winda who has all four members of KISS living in her brain, because of course she does. Continuing the revolving door of guest-stars from other Steve Gerber books is a personal favorite, Daimon Hellstrom. Thanks to the meddling of a quack (pun intended) guru, the Son of Satan’s hell soul possesses Howard instead! 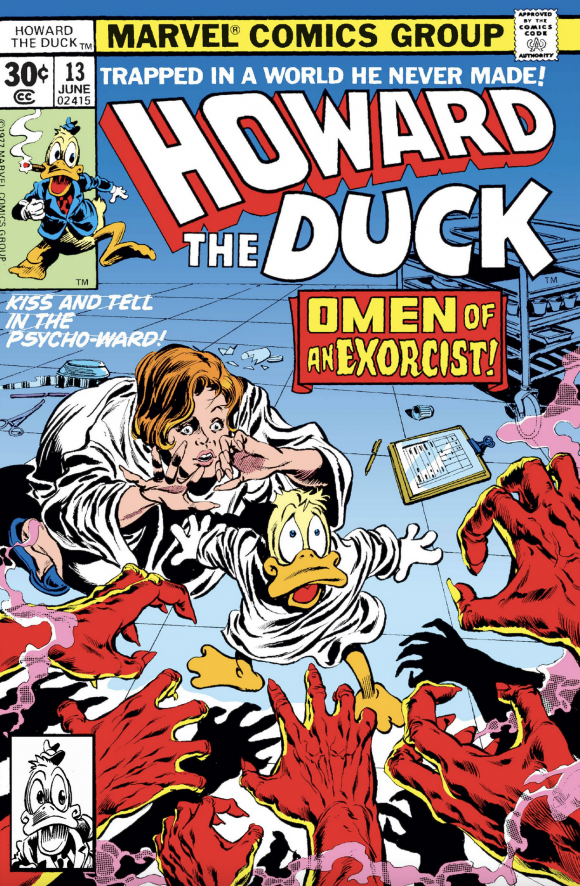 8. Howard the Duck Annual #1: “The Thief of Bagmom!” Two of Howard’s Cleveland housemates are accidentally kidnapped by a flying carpet they got at a yard sale. Trapped in an Arabian Nights harem, they have to be rescued by Howard with the help of a genie that can only speak in smoke SFX. Howard co-creator Val Mayerik reunites with Gerber for an epic comic adventure. 9-10. Howard the Duck #17-18: “Doctor Bong!”/“Metamorphosis.” Darth Vader. Destro. Victor von Doom. Iron Monger. All the best villains come armored. Doctor Bong, Howard’s arch-nemesis and Beverly’s super-stalker, is no different. The fact he activates his sonic powers by repeatedly hitting himself in the head makes him all the more awesome. A low-rent Dr. Moreau, Bong has created a leggy anthropomorphic duck, Mademesoille Fifi, to ruffle Howard’s feathers while the Doc puts the move on Bev. As if this wasn’t enough, the Doc also transforms our hero into a young Peter Falk-esque Howard the Human! 11. Howard the Duck #21: “If You Knew Soofi…!” In a twist worthy of Victor Hugo (okay, maybe not), Howard, returned to duck form, has wound up as a dishwasher for his absent Bev’s uncle, whose name is also Beverly Switzler (he goes by Lee for short). They have earned the enmity of the nerf-headed cult leader Soofi, who wants to “blanderize” Howard to enlist him in destroying any art or culture he finds objectionable. The highlight here is special guest artist Carmine Infantino, who really should have gotten the opportunity to draw comedy more often. 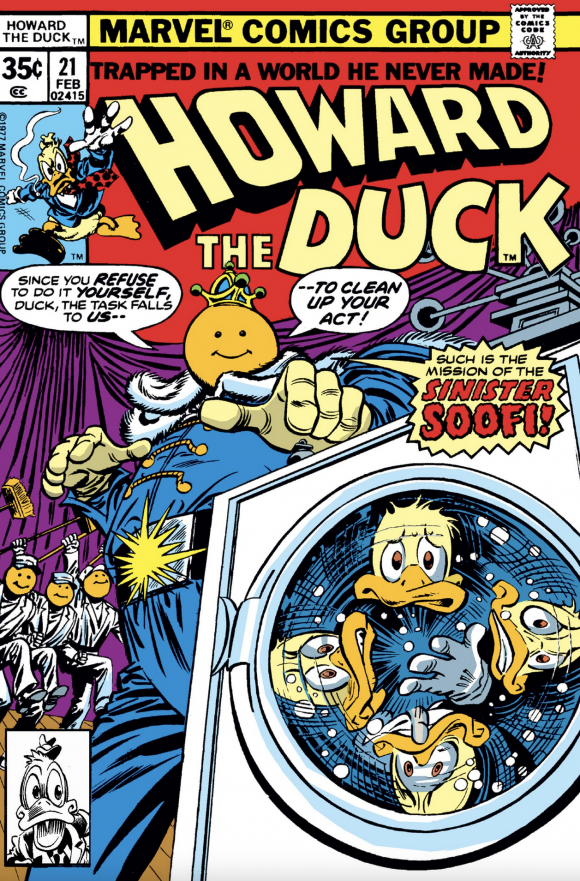 12. Howard the Duck #23: “Star Waaugh.” The heroes from Howard’s first dimension-hopping appearance in Man-Thing—junior witch Jennifer Kale, Gandalf ripoff Dakimh the Enchanter, Korrek the Barbarian and, of course, the swamp-shambler himself, reunite for a new Val Mayerik-drawn epic parodying Marvel’s latest, hottest, best-selling title that I think at this point has had more parodies than official sequels? Our heroes have to save Kale from the Death Store, headquarters of the Emporium. Howard masters the “Farce,” which lets him slay the villain with a sign-firing gun (“You Have No Sense of Humor”). “Spaceballs” it ain’t, but it’s silly fun. 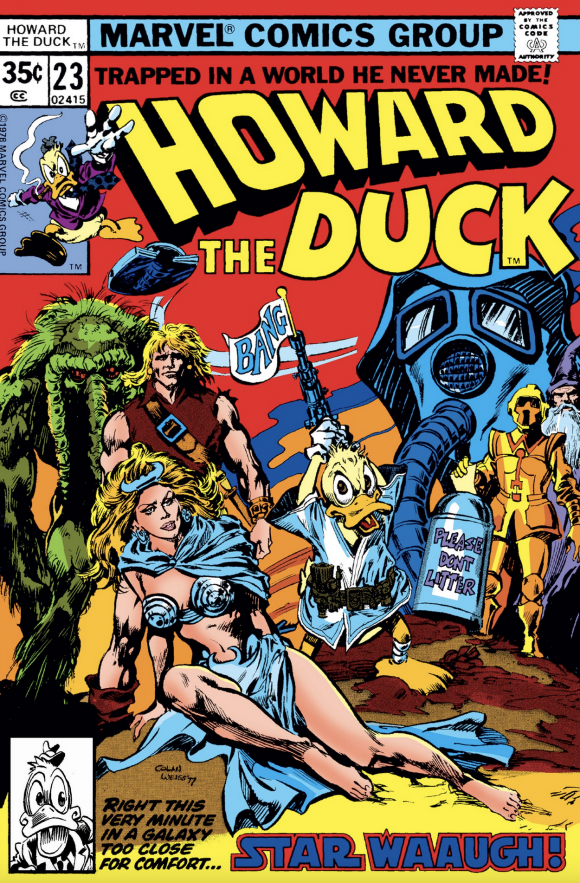 13. Howard the Duck #26: “Repercussions…!” Like every other Marvel character ever, Howard has run afoul of the Circus of Crime, which has dragooned him into becoming a vaudevillian freak. The most interesting thing about this issue is that Howard hurts Ringmaster’s feelings by telling him he is perverting the noble profession of the circus. Cannonball chastises the waterfowl by telling him that Ringmaster’s parents died in the Holocaust (!), and so he carries on their circus traditions in their honor, so Howard should really watch his mout—er, beak. Dude! Way to bring the party down! NOTE: An earlier version of this piece inadvertently included an issue by Bill Mantlo. The list is now corrected. — Dan