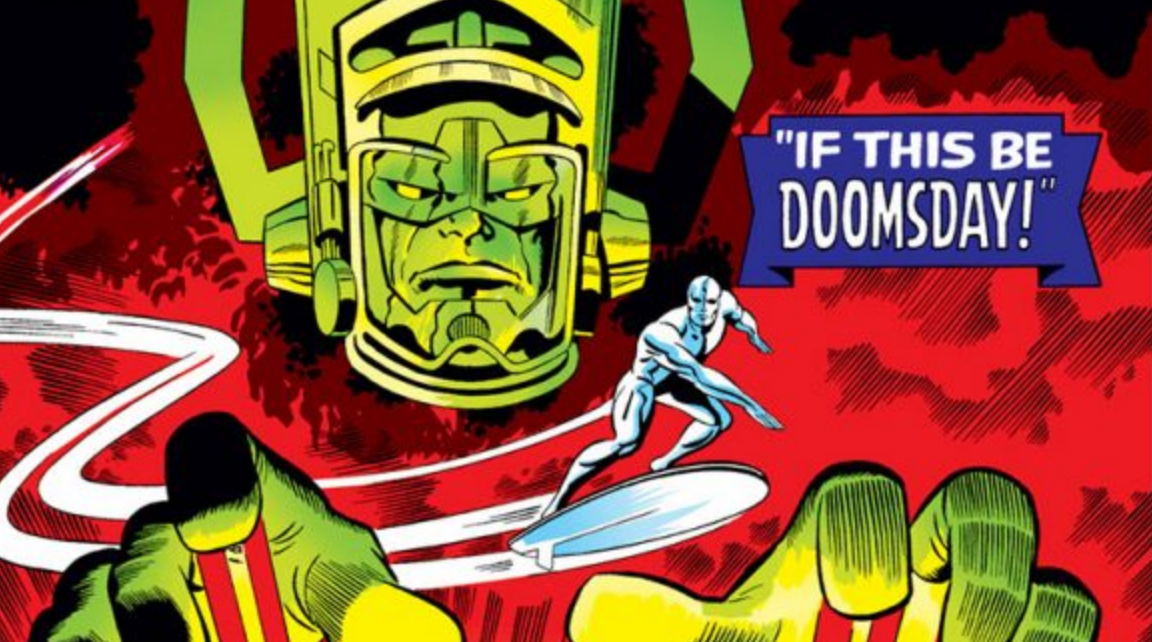 It’s been a little more than a week since we lost Stan Lee and there have been a million tributes around the globe.

We’ve run our own fair share, such as Dave Gibbons’ wonderfully moving appreciation of Stan the Man (click here), but one thing we haven’t done is gotten down and looked at Lee’s work as a storyteller.

Contributor Anthony Durso has taken on the task with his list below, which is sure to enrich some and enrage others.

Speaking of, I’m sure there are Stan Lee detractors out there who will point out story elements or concepts that were actually devised by Jack Kirby or Steve Ditko (among other collaborators). That’s the nature of this particular beast – and we’re well aware of how dicey it is to assign credit for Marvel stories of the era. We’re also great admirers of the many artists’ contributions to the Marvel Age — something that’s well documented across 13th Dimension.

But we’re diving in nonetheless. Ever since I can remember, Stan Lee was the face of Marvel. He was its writer, editor, publisher, goodwill ambassador and mascot. While Jack Kirby and Steve Ditko were the contractors and builders of the House of Ideas, Lee was the architect and the foreman on the job, putting his stamp of approval on it all: Stan Lee Presents…

When I first started to delve into Marvel history as a kid, there was Stan Lee presenting — in the Fireside Books and Pocket Books collections — stories written by Stan Lee. So, using those volumes as a guide, here are my TOP 13 STAN LEE TALES FROM THOSE TUMULTUOUS TOMES, all of which have left an impression on me for more than 40 years.

13. The Fury of the Femizons (Savage Tales #1). Savage Tales was Marvel’s short-lived black-and-white magazine that was designed to compete with the Warren Publishing mags. Issue #1 (May 1971) featured a Stan Lee-John Romita tale starring Princess Lyra of the Femizons. The Femizons were the ruling class (also known as the United Sisterhood Alliance) of the planet Femizonia (eventual home to Thundra), where men served as slaves. A dark alternate take on Amazon society that was nothing like that found in Wonder Woman comics of the time, this story was one of the first “adult”-themed comics I remember reading. (Reprinted in The Superhero Women, Fireside, 1977.) 12. Brother, Take My Hand (Daredevil #47). Stan Lee was never afraid to use Marvel Comics to tackle topical issues, much earlier than DC did during the “relevancy era” of the early ’70s. Which is probably why he was a frequent and popular guest on the college lecture circuit. In this issue, Matt Murdock defends blind African-American soldier Willie Lincoln when he returns home from his tour of duty in Vietnam. Lincoln was wrongly accused of accepting a bribe in his former life as a cop and while Matt attempts to clear the vet’s name, it’s up to Daredevil to battle those who want him to remain guilty. Stellar art by Gene Colan. (Reprinted in Son of Origins of Marvel Comics, Fireside, 1975.) 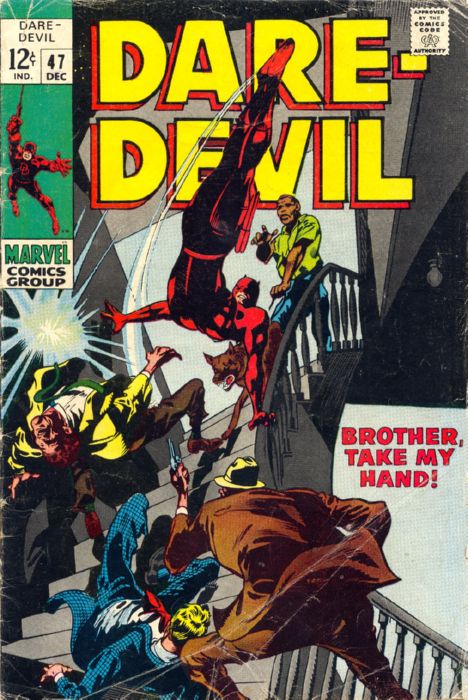 11. When Fall the Mighty (Tales of Suspense #79-80, Tales to Astonish #82). Like oil and water, Iron Man and the Sub-Mariner are at odds in this tale that’s the first Marvel story to cross over from one title to another. In typical arrogant fashion, Namor is furious with Iron Man for his interference that allowed Krang to escape with Lady Dorma. Iron Man is at a considerable disadvantage, the result of a drain on his armor. But the tables turn when Namor begins to lose strength, having been away from water for too long. Eventually Shellhead and Subby are both back up to full strength — but that doesn’t stop Namor from abruptly leaving the scene mid-battle. Art is handled by Gene “the Dean” Colan (with an assist from Kirby in the final chapter). (Reprinted in Marvel’s Greatest Superhero Battles, Fireside, 1978.) 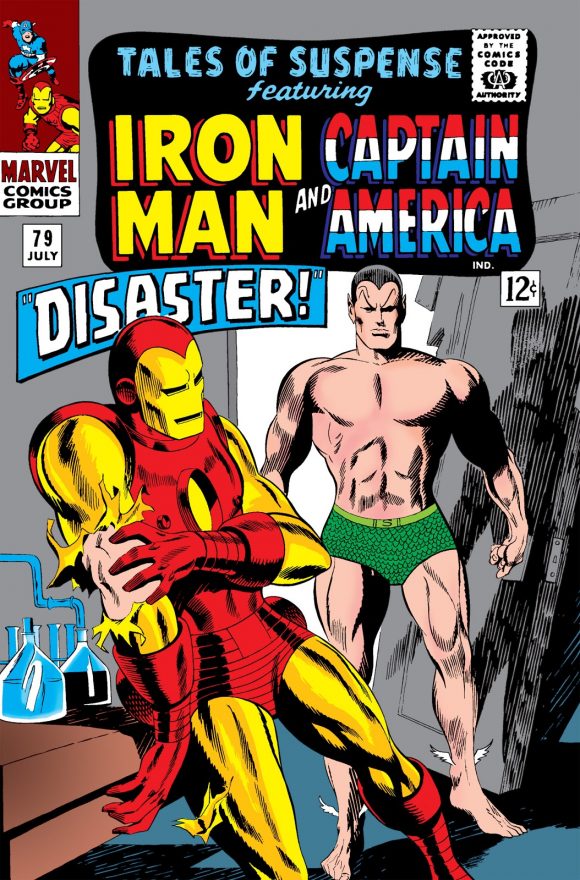 10. The Origin of Daredevil (Daredevil #1). With penciller “Wild” Bill Everett, Stan spins the yarn of Matt Murdock, lawyer, who is secretly the masked vigilante known as Daredevil. Oh, by the way, Matt Murdock is blind. You see (pun intended), young Matt was struck by a radioactive canister across the face when he pushed an elderly gentleman out of the path of a runaway truck. And although blindness was a result, Matt’s other senses were enhanced to superhuman levels. When Matt becomes an adult, he uses these powers to avenge his father’s death at the hands of the Fixer. One of the greatest origins of the Marvel Age, this story hooked me the first time I saw a synopsis of it in the pages of Dynamite magazine’s Superhero Confidential feature. (Reprinted in Son of Origins of Marvel Comics, Fireside, 1975.) 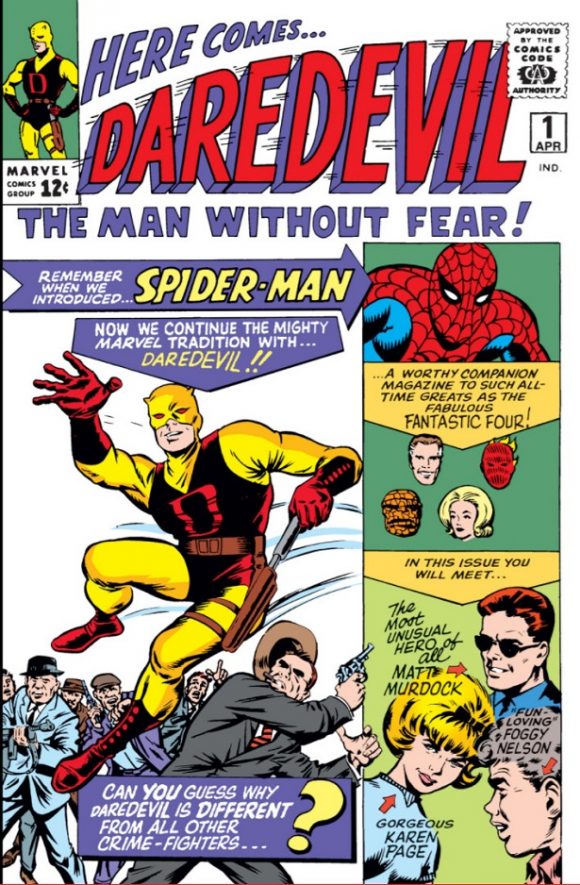 9. The Pincers of Power (Strange Tales #139-141). Dr. Strange and Baron Mordo battle, with the life of the Ancient One hanging in the balance. When Strange defeats Mordo, the Dread Dormammu decides to take matters into his own hands — literally — as he faces off with the Master of the Mystic Arts in a duel with the Pincers of Power. Like his lackey before him, Dormammu is defeated and vows never to interfere with Earth again. We’ll see how long that lasts. As usual, “Sturdy” Steve Ditko provides the psychedelic, acid-dropped landscapes that accompany Stan Lee’s flowery prose and mystic incantations. (Reprinted in Marvel’s Greatest Superhero Battles, Fireside, 1978.) 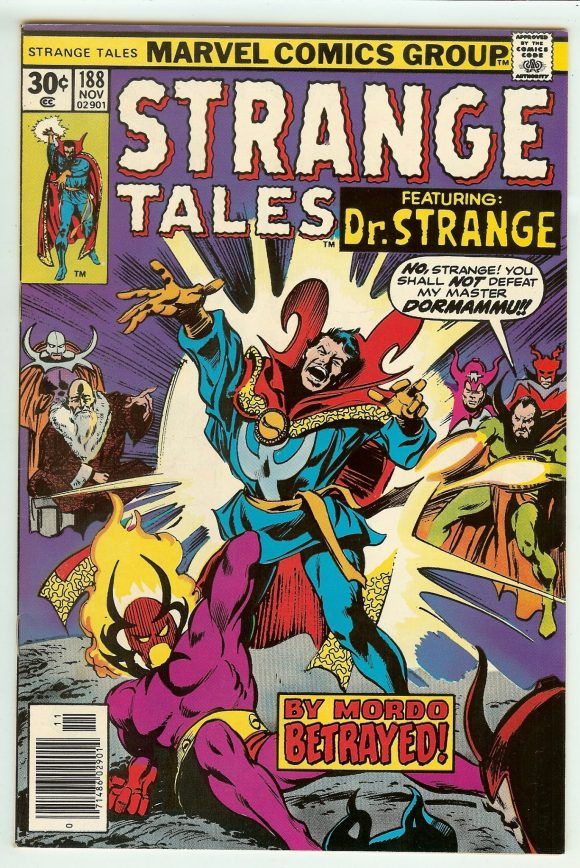 8. The Hulk vs. the Thing (Fantastic Four #25-26). The Hulk, aka “Bob” Banner, who’s been on the run in New Mexico, decides to change his stomping grounds to New York City. The Big Apple happens to be the home of the Fantastic Four, who don’t take kindly to the new tourist. When they attempt to stop the Green Goliath, he makes mincemeat out of them, leaving only the Thing left to continue the battle. But the Hulk’s former teammates, the Avengers, have been on his trail as well. However they don’t mesh well with the FF and a melee ensues — allowing the Hulk to escape. Stan’s scripts do well to juggle the multiple characters and their distinct personalities, so who’s going to blame the guy for forgetting the secret identity of Ol’ Greenskin? Certainly not Jack Kirby, who had his hands full drawing the Thing…and The Hulk…and Iron Man…and Captain America…and bearded and bedraggled Reed Richards. (Reprinted in Marvel’s  Greatest Superhero Battles, Fireside, 1978.) 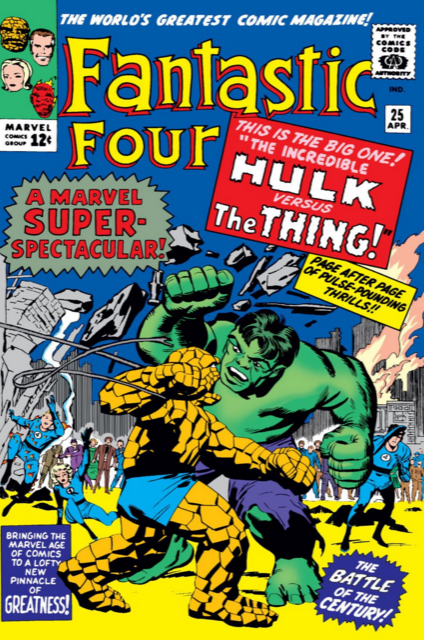 7. The Coming of Galactus (Fantastic Four #48-50). Stan and Jack “King” Kirby weren’t going home, so they went BIG. In an attempt to conceal the Earth from a being called the Silver Surfer, Uatu the Watcher draws the attention of the Fantastic Four. But it’s a futile attempt by the Watcher as the Surfer has already alerted his master — Galactus. An ancient being created during the Big Bang, Galactus has come to town for one reason: He’s hangry. And a Snickers bar just won’t cut it, so he plans to consume the Earth instead. Needless to say the FF don’t go along with this idea and must do battle with Galactus’ minion, the Punisher (no, not Frank Castle). Meanwhile, the Surfer is out of action, resting comfortably at Alicia Masters’ place. And that’s a good thing because she convinces the Surfer to switch sides, buying the FF some time to get some MacGuffin called… the Ultimate Nullifier! Eventually known as The Galactus Trilogy, this cosmic romp is epic in scope and yet still down to Earth, as evidenced by bearded and exhausted (again) Reed Richards. (Reprinted in The Fantastic Four, Fireside, 1979.) 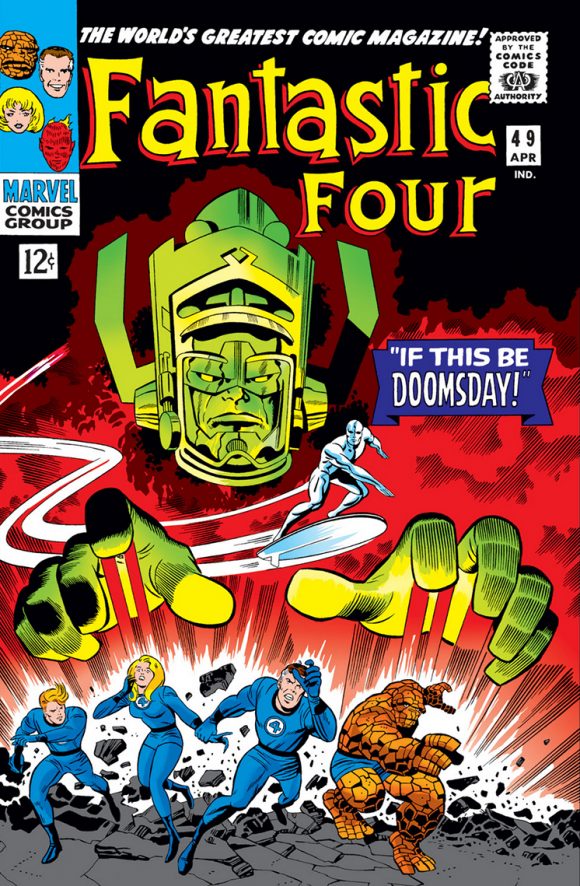 6. In the Grip of the Goblin (Amazing Spider-Man #96-98). In a break from the status quo of the Comics Code Authority, Stan and Marvel published these three issues of their flagship title without the CCA seal of approval. The reason? Stan’s and artist Gil “Sugar Lips” Kane’s portrayal of Harry Osborn’s decent into drugs, specifically LSD. As Harry succumbs to an overdose, his father is too busy with his Green Goblin alter ego to attend to him. Harry’s best friend, and roommate, is nowhere to be found either, as Peter Parker is tied up as Spider-Man in battle with the Goblin. Eventually, Spider-Man is able to force the Green Goblin to acknowledge Harry’s drug problem and snap him back to reality. After all, as Joe Robertson put it, drugs just aren’t a ghetto problem…they’re everyone’s problem. (Reprinted in The Amazing Spider-Man, Fireside, 1979.) 5. The Good, the Bad and the Uncanny (Silver Surfer #4). Once again, the God of Evil (who also happens to be the God of Mischief), Loki, manipulates matters to cause his half-brother, Thor, problems. This time out, Loki’s pawn is the Silver Surfer, whom he sends to Asgard to fight Thor. Stan is at the top of his language game with the thees and thous of Thor and the Asgardians and the cosmic melancholy of the Silver Surfer, all while “Big” John Buscema pulls out the stops with the gorgeous artwork. Eventually, both heroes realize they’ve been set up and an angry Loki sends the Surfer back to Earth. (Reprinted in Marvel’s Greatest Superhero Battles, Fireside, 1978.) 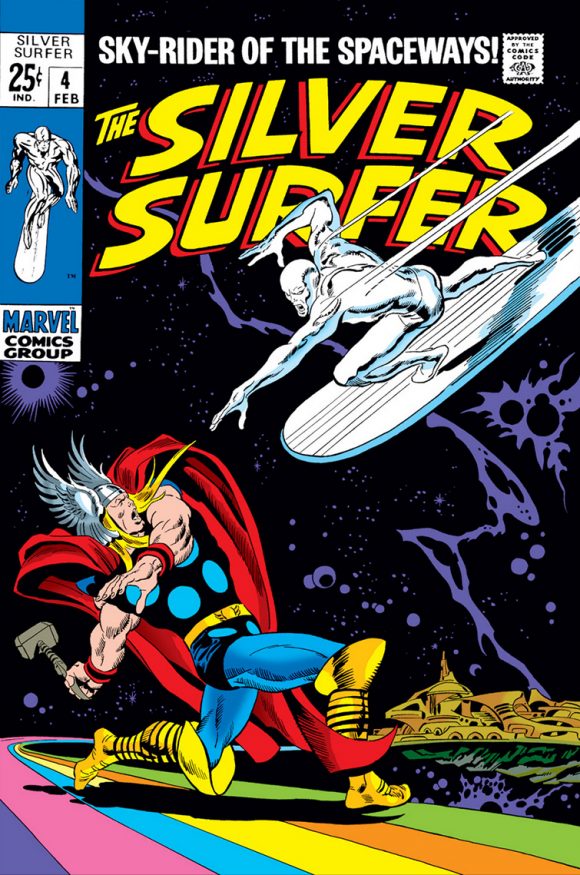 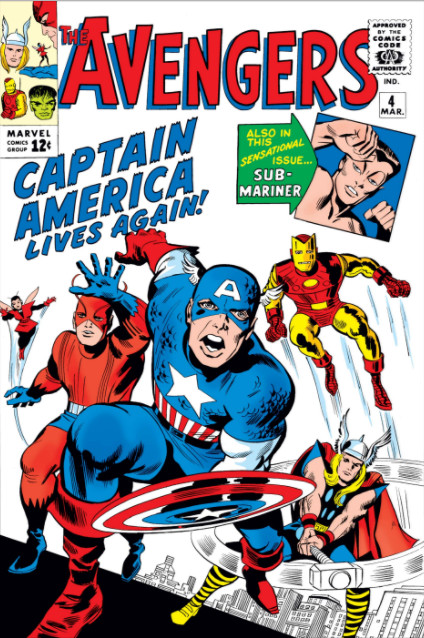 3. The Coming of the Hulk (Incredible Hulk #1). Doc Bruce Banner, belted by gamma rays… Stan and Jack played mad scientists and took one part Frankenstein, one part Dr. Jekyll and Mr. Hyde and presaged The Fugitive to create the Incredible Hulk. Previously, they had taken one of the BEM-style creatures that Marvel (Atlas) had been known for and made him the Thing, part of their introductory effort of the Marvel Age, The Fantastic Four. But with the Hulk, they essentially created Marvel’s first antihero to headline his own book. In another of the greatest origin stories of the Marvel Age, Lee and Kirby laid the groundwork for the misunderstood behemoth who was always on the run from the authorities, the military, the occasional superhero whose path he’d cross… and himself. (Reprinted in Origins of Marvel Comics, Fireside, 1974, and The Incredible Hulk Vol. 1, Pocket Books Series, 1979.) 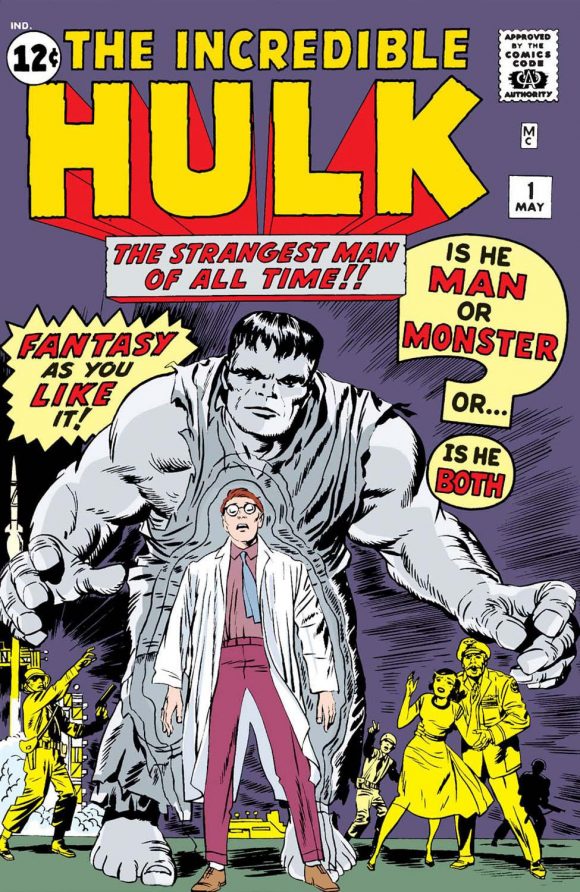 2. The Fantastic Four (Fantastic Four #1). The Thing! Invisible Girl! The Human Torch! Mr. Fantastic! Wait…who? Marvel’s first foray into Silver Age superheroics was unlike any at rival DC Comics. Publisher Martin Goodman tasked Stan Lee with coming up with a new superhero team designed to compete with the sales of DC’s Justice League of America. Together with Kirby, Stan created “The World’s Greatest Comic Magazine.” For more than 100 issues, Lee and Kirby created a tapestry that served as the foundation of the Marvel Universe. The Inhumans, Dr. Doom, Galactus, the Silver Surfer, Black Panther, Adam Warlock, Skrulls, the Negative Zone, the Watcher, the Kree and more all began their stories in an issue of The Fantastic Four.The first issue was, quite obviously, just the beginning. (Reprinted in Origins of Marvel Comics, Fireside, 1974, and The Fantastic Four, Pocket Book Series, 1977.) 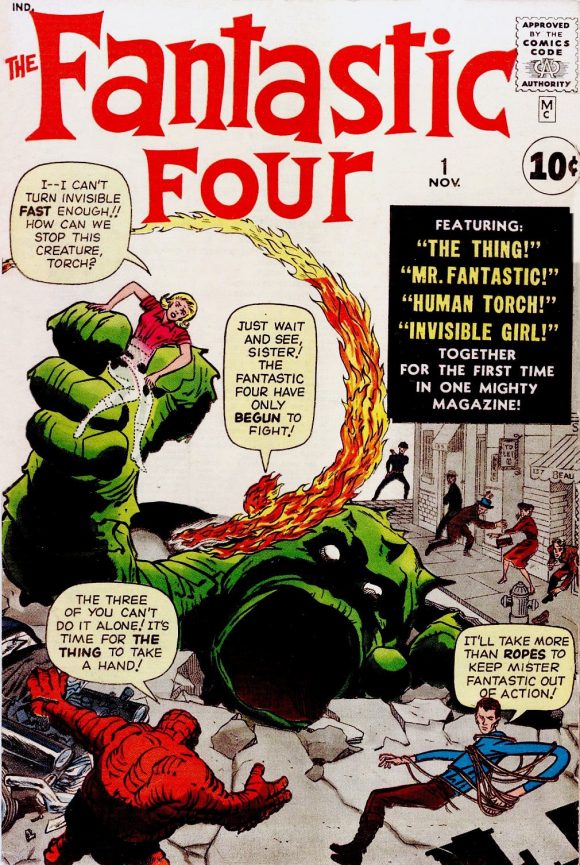 1. Spider-Man! (Amazing Fantasy #15). It was often said that Stan Lee refused to allow anyone else to write the Silver Surfer except himself. But Spider-Man is really his magnum opus. Together with co-creator Steve Ditko, Lee took a milquetoast wallflower named Peter Parker and turned him into the wise-cracking web-slinger known as the Amazing Spider-Man. Before graduating to his own title, Spider-Man made his first appearance in Amazing Fantasy #15, a book destined for cancellation. With nothing to lose, Lee and Ditko created the greatest origin of the Marvel Age, and one of the greatest superhero origins, period. Through an unfortunate set of circumstances, Peter Parker learns through tragedy that with great power comes great responsibility! (Reprinted in Origins of Marvel Comics, Fireside, 1974, and The Amazing Spider-Man Vol. 1, Pocket Books Series, 1977.) 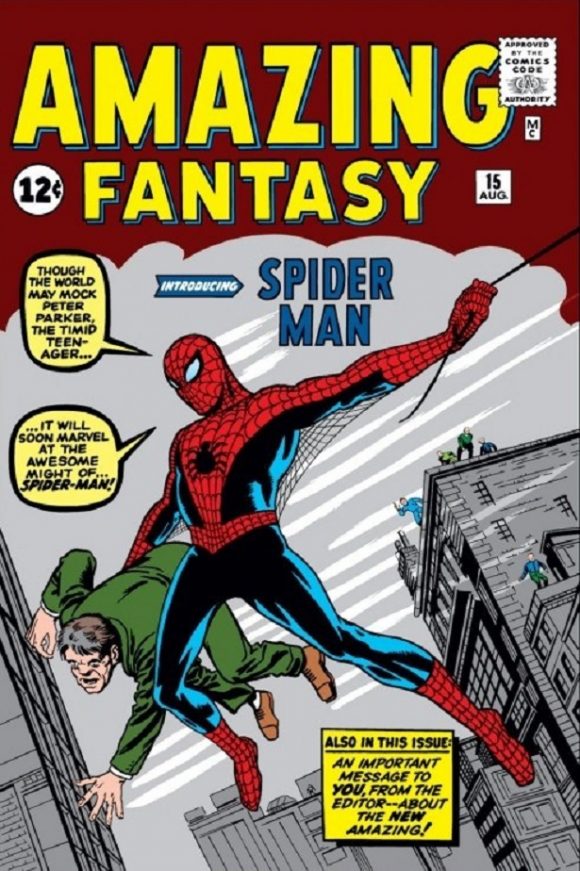