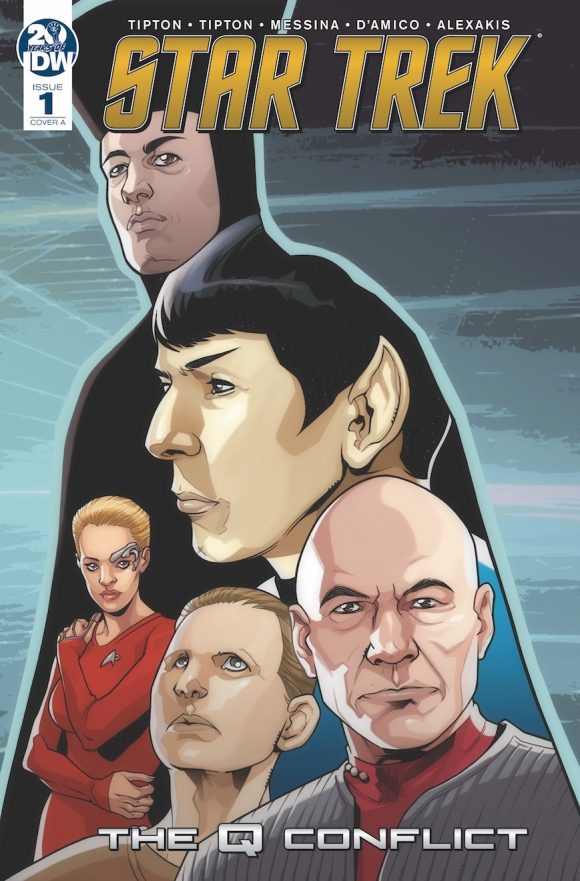 In tandem with that, Scott’s come up with the TOP 13 Q MOMENTS FROM STAR TREK.

As expert Robert Meyer Burnett has pointed out, Star Trek doesn’t really have villains, it has antagonists. These aren’t mere mustache-twirling “bad guys,” but adversaries who nonetheless have a perspective, a point of view, that leads them into opposition with our valiant Starfleet heroes.

For my money, the best of them all is Q, the omnipotent, extradimensional being who pops up like a bad penny time and again to bedevil Jean-Luc Picard in Star Trek: The Next Generation. It’s a character I have long loved watching, and currently am greatly enjoying writing — and you can see the fruits of those labors this Wednesday (1/30) when the first issue of Star Trek: The Q Conflict hits stores. (Picard, Kirk, Sisko and Janeway have to compete with – naturally – the fate of the universe at stake.)

While we wait to see what Q’s latest misadventure is, let’s take a look back through the TOP 13 Q MOMENTS FROM STAR TREK:

13. Here Comes the Judge. Q’s initial appearance came in the very first episode of TNG — Encounter at Farpoint — in which he puts Captain Picard and the rest of humanity on trial for being a savage race. When Picard’s security officer Tasha Yar objects, Judge Q (as played by John de Lancie in a debut performance that guaranteed numerous return engagements) overrules her in a most chilling fashion… 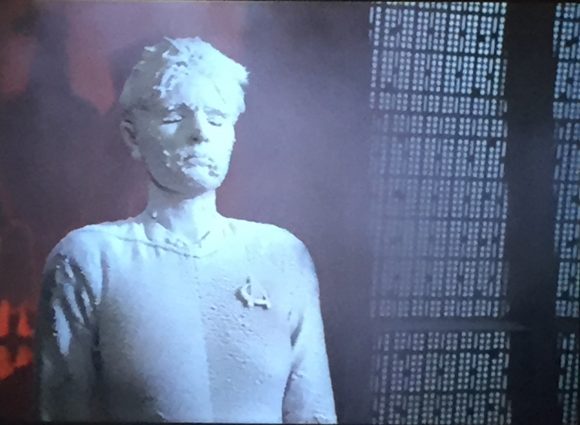 12. Q and Guinan Have a History. When Q returned in the second season, he encountered the Enterprise’s new barkeep, Guinan, and from their threatening posture toward one another, it was clear that there was no love lost between them — and that there was much more to Guinan than meets the eye… 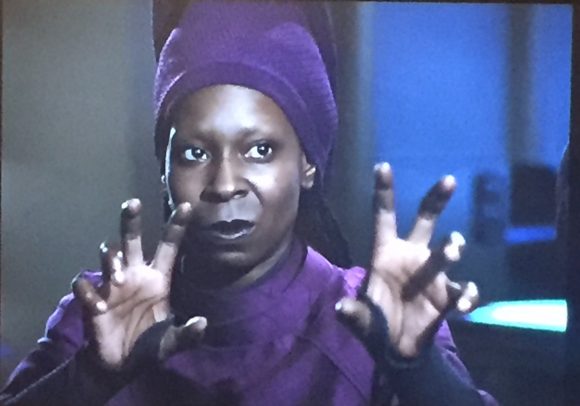 11. Q Gets the Point. This hostility toward Q would resurface with Guinan again in the third-season episode Deja Q, in which Q has been stripped of his powers and flees to the Enterprise for sanctuary. Guinan has doubts that Q is really mortal and determines so in the simplest manner possible: by driving a fork into his hand. 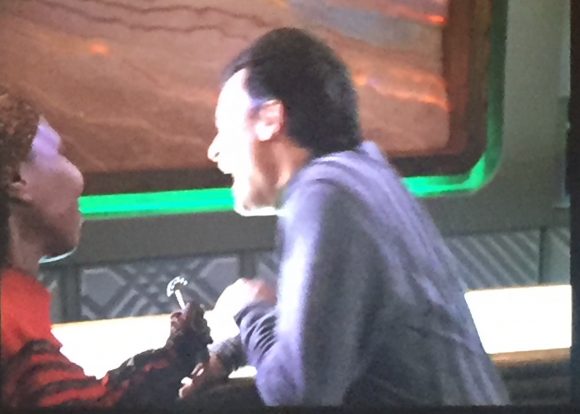 10. Another Try at Humanity. This isn’t my first opportunity to write for Q. A few years back, my co-writer David Tipton, artist Elena Casagrande and I got to tackle Alien Spotlight: Q, a tale in which Q returns to once again get a taste of what it’s like to be human, this time by taking over the body of one Jean-Luc Picard. Q soon finds out that even the smallest of interactions isn’t quite as easy as he’d imagined. I’m really fond of this little one-shot tale, which can be found in the trade paperback Alien Spotlight Vol. 2. 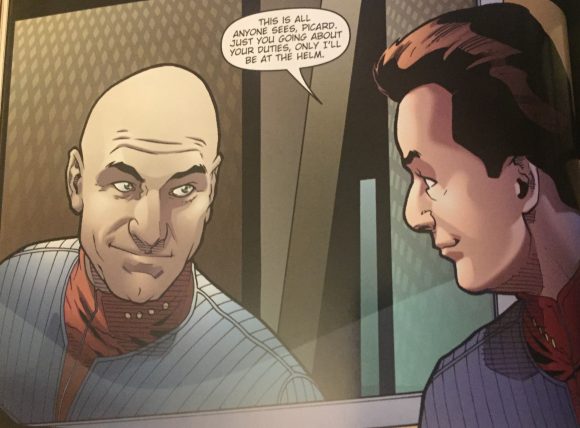 9. Q-de-Lally! His powers returned, Q was back to his old tricks in the fourth-season episode Qpid, in which Q transports Picard and his crew back to the days of Sherwood Forest, where they take on the roles of Robin Hood and his Merry Men. Naturally, who else would Q play but the Sheriff of Nottingham? 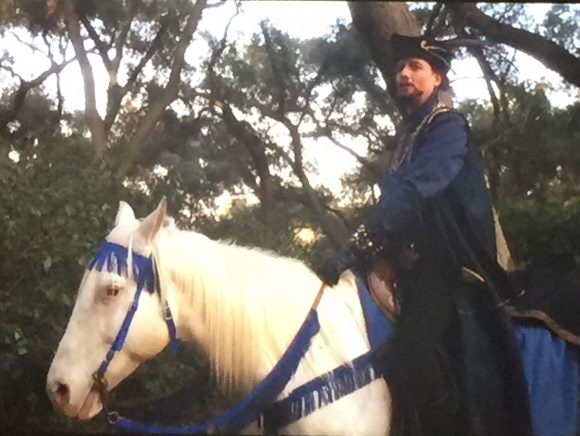 8. Oh, Heavenly Q. Q’s most surprising entrance, no doubt, came in the sixth-season episode Tapestry, in which a gravely injured Picard dies on Dr. Crusher’s operating table, leading to his meeting up with an angelic Q, who greets him thusly: “Welcome to the afterlife, Jean-Luc. You’re dead.” 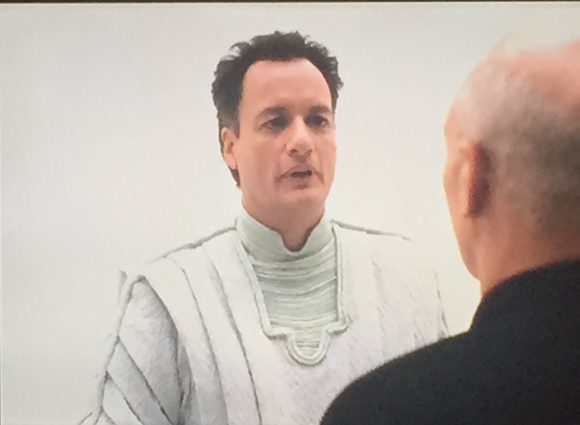 7. Knockout Q. Picard wasn’t the only Starfleet captain Q would bedevil. In his sole appearance on Deep Space Nine, Q challenges Sisko to an old-timey boxing match, only to get sent to the floor by a right cross – leaving the being to cry: “You hit me! Picard never hit me!” 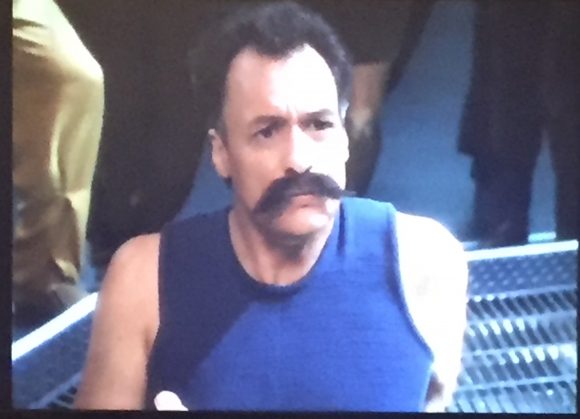 6. I Only Have Eyes for Q. Things would get even weirder with the other Starfleet captain Q would encounter — Kathryn Janeway of Star Trek: Voyager, in the third-season episode The Q and the Grey. Determined to sire a child to combine the best elements of humanity and the Q, Q makes an effort to seduce Janeway that is as hilarious as it is fruitless. 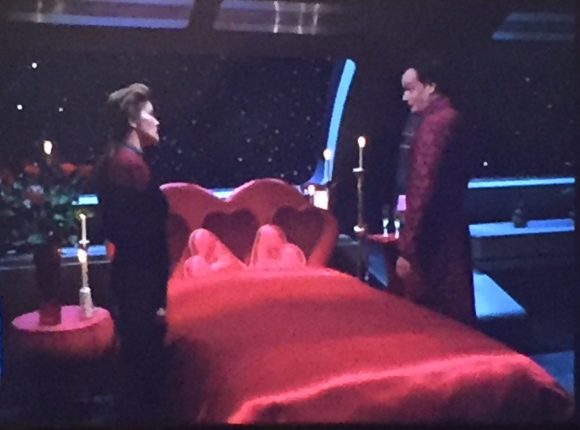 5. Q Victorious. In probably his most notable victory over Picard, in the episode Q-Who?, Q hurls the Enterprise farther into space than the crew has ever traveled, to prove his point that humanity isn’t ready for the terrors that await. After an encounter with the Borg cripples Picard’s ship and claims the lives of 18 crewmembers, the captain is forced to admit their weakness and ask Q to return them to safety, which he does — but not before gloating just a little about what’s to come: “It’s not for the timid.” 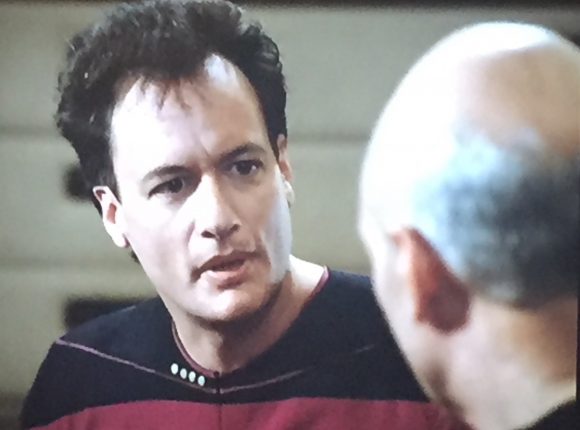 4. Ay Qaramba! For sheer yucks, nothing is better than the hilarious moment when Q regains his powers in Deja Q and decides to throw a party on the bridge, complete with a mariachi band. 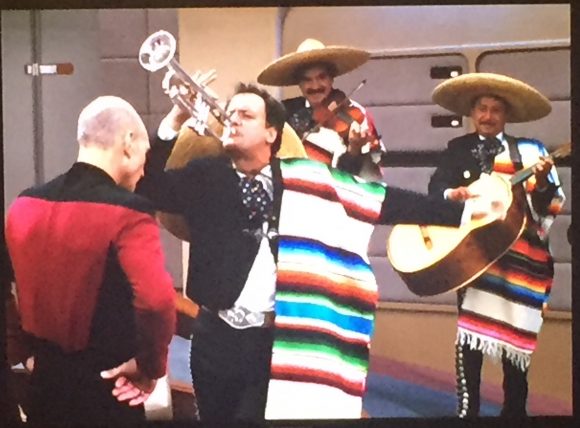 3. A Final Test. In the final episode of TNG, All Good Things, Captain Picard is forced to solve a mystery across three distinctly different periods in his life, hurtling back and forth between them thanks to, as always, interference from Q. At adventure’s end, when Picard succeeds and finds himself back in the courtroom from their first encounter, he thanks Q, realizing that Q had been subtly helping Picard all along. For the first time, we see genuine affection in Q’s face, as he admits, “Well, I was the one who got you into it.” A very sweet little moment that pays off years of antagonism in their relationship. 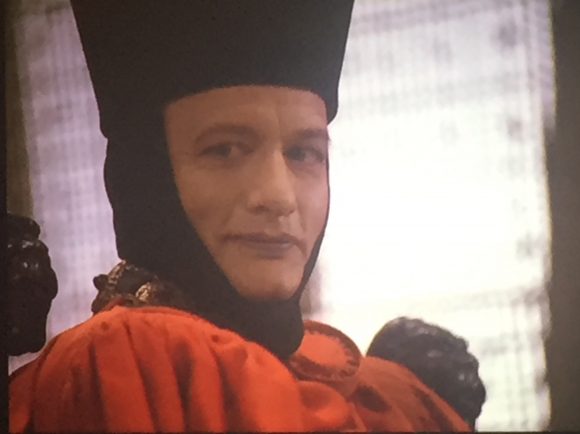 2. Q Anew. If I may be so self-indulgent, let’s look at a heretofore unrevealed moment from The Q Conflict, in which Picard has called Q to the carpet for the damages his war among the godlike beings of the cosmos is doing to the all-too-mortal inhabitants of Picard’s reality. And as so often happens, arguing with Q leads you to places you most definitely don’t want to go… 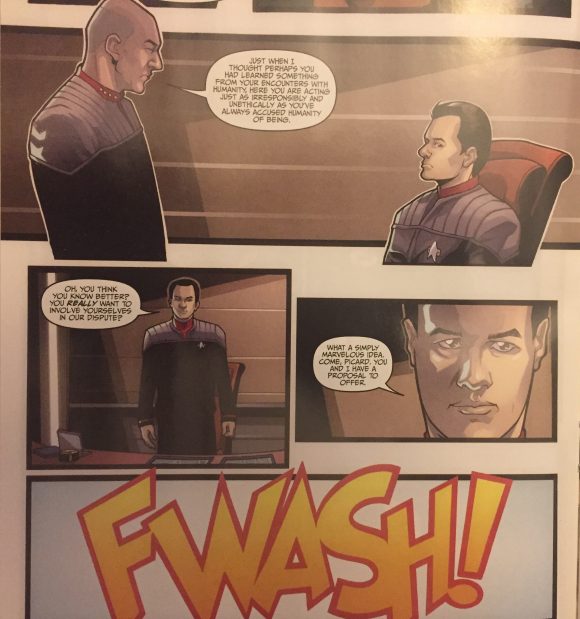 1. Thank Q. And finally, my favorite Q moment of all comes once again from the third-season episode Deja Q, in which Q, his powers returned, seeks to thank his “Professor of the Humanities” Data for his help while Q was trapped in human form, and does so in a way both distinctly Q-like and surprisingly touching. Wonderful:

Scott Tipton’s newest Star Trek series, The Q Conflict, hits comic shops worldwide this Wednesday (1/30). You can find his writings on all things comics every Wednesday at www.blastoffcomics.com. He also contributes to 13th Dimension’s HOT PICKS every Monday. (Click here.)