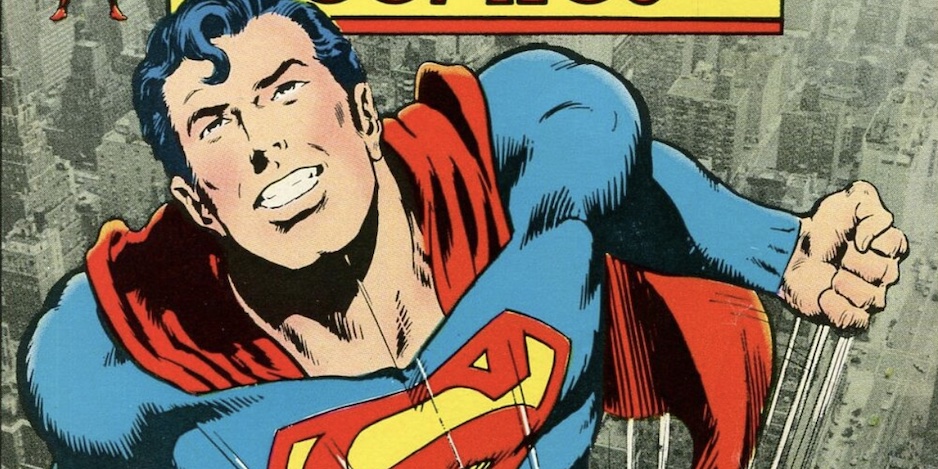 Neal Adams’ death in April hit me hard. Though I knew he was fighting health problems, I expected him to rally through the sheer force of his will — not an uncommon expectation for anyone who knew him.

His profoundly powerful artistry has had an immense impact on me going back to my earliest days as a comics reader, when I was about 5 years old. Decades later, I was fortunate to have a working relationship with him through 13th Dimension and couldn’t possibly be prouder that he saw fit to write guest columns here from time to time.

Imagine that. Being a guy who can say he published Neal Adams. That doesn’t even address the many times he graciously gave up hours of his time for interviews and just plain bull-shooting, whether at his studio or on a convention floor. 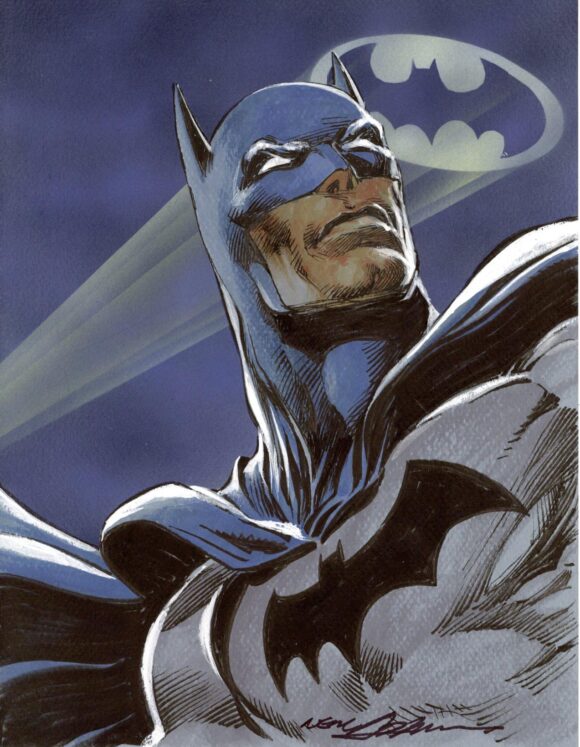 Adams and Batman are synonymous to me. The Darknight Detective is best when drawn by Adams, and Adams never drew a character better.

But with his birthday upon us — he was born 81 years ago on June 15, 1941 — I decided to go in a different direction. I’ve published so much on Adams and Batman that I decided to do a 13 COVERS gallery starring the Caped Crusader’s pal, Superman. I’ve also decided to challenge myself and rank them. (For a different viewpoint, check out what Paul Kupperberg wrote about Adams and Superman a year ago.)

Adams didn’t do many Superman interiors — with some very notable exceptions — but his covers are some of the Man of Steel’s most popular. Nevertheless, there’s one cover you will not find on this list: Superman #233. How could I leave off what might be the most iconic Superman cover this side of Action Comics #1 and Superman #1? Simple: Adams claimed he hated it. Insisted upon it. He explained why in an interview we did some years back — and who am I to argue with a comics titan?

So dig the TOP 13 NEAL ADAMS SUPERMAN COVERS — RANKED. Even if a very notable one is missing.

13. Action Comics #358. I don’t know if it was a design choice or a tight deadline but the images and their reflections really work against the stark, gray background. Dramatic. 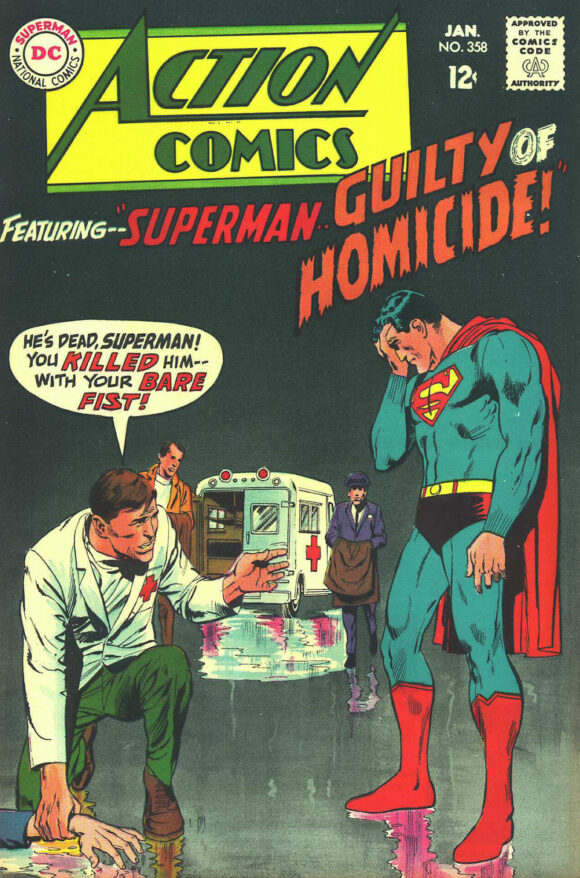 12. Action Comics #359. This issue and the one above came out in late 1967, just as Adams was making his splash. What a great pairing; the scenarios aren’t new to comics but Adams gives them both extra shock value and impact — because he could draw the hell out of any scenario, no matter how jarring or absurd. 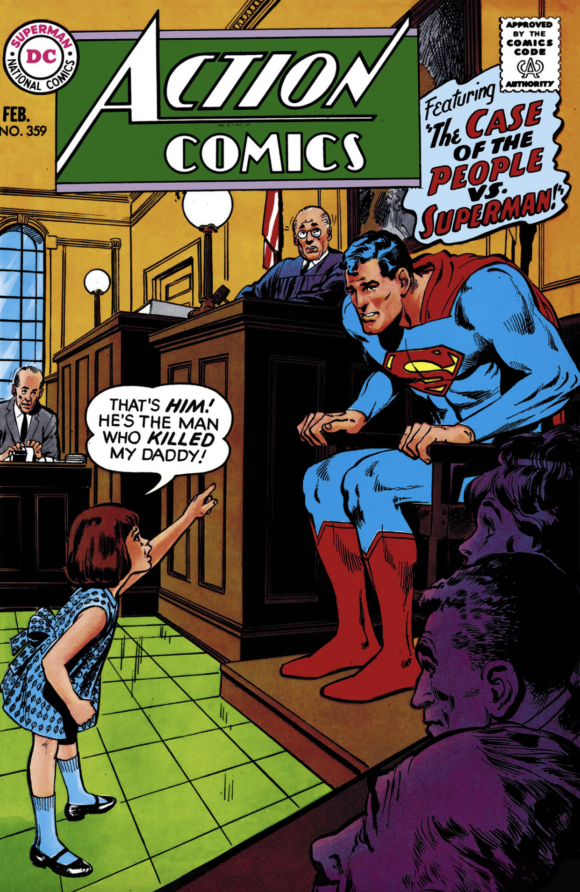 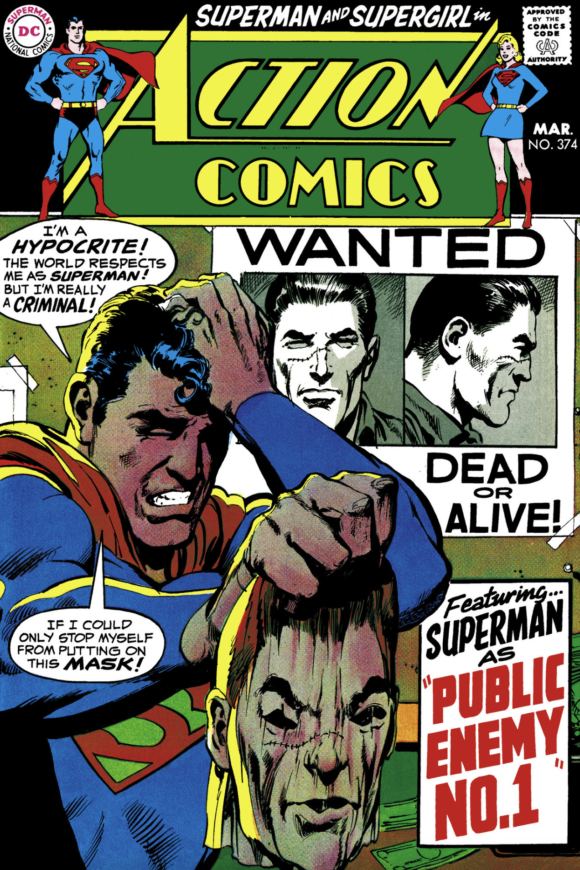 10. Action Comics #366. Kal-El makes only a cameo but what a groovy line-up of faux Supermen. And dig the way the “S” shields pull your eye to the center, where Supergirl, wearing her own “S” shield, is giving them all what-for. Outstanding composition. 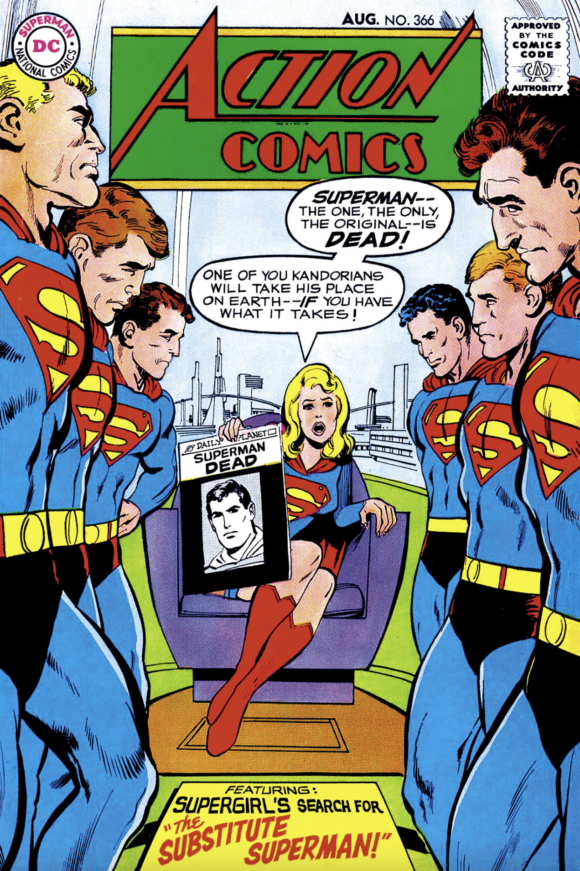 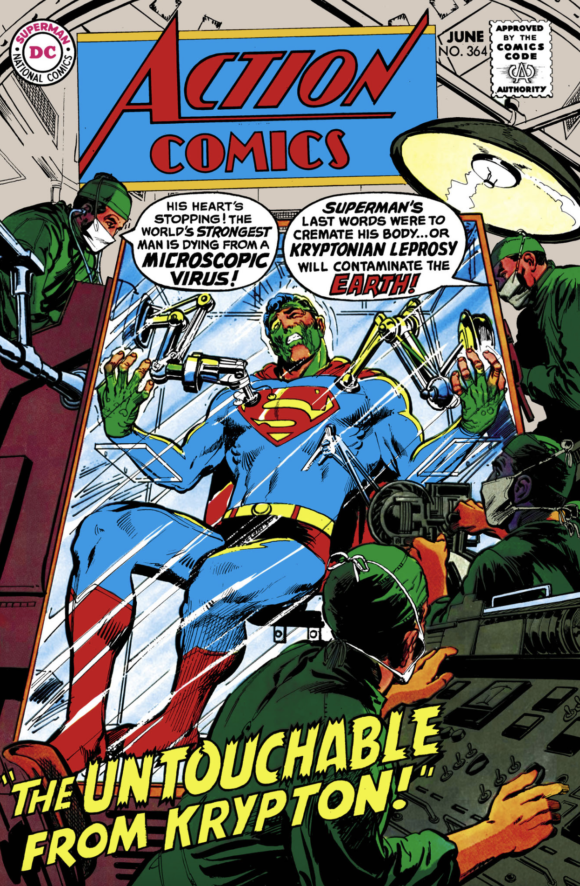 8. Superman #204. The house ad for this one made a huge impression on me. It’s very Silver Agey — it came out in late 1967 — but Adams’ draftsmanship fills you with a sense of menace and dread. One of the most enduring Superman covers of the ’60s. 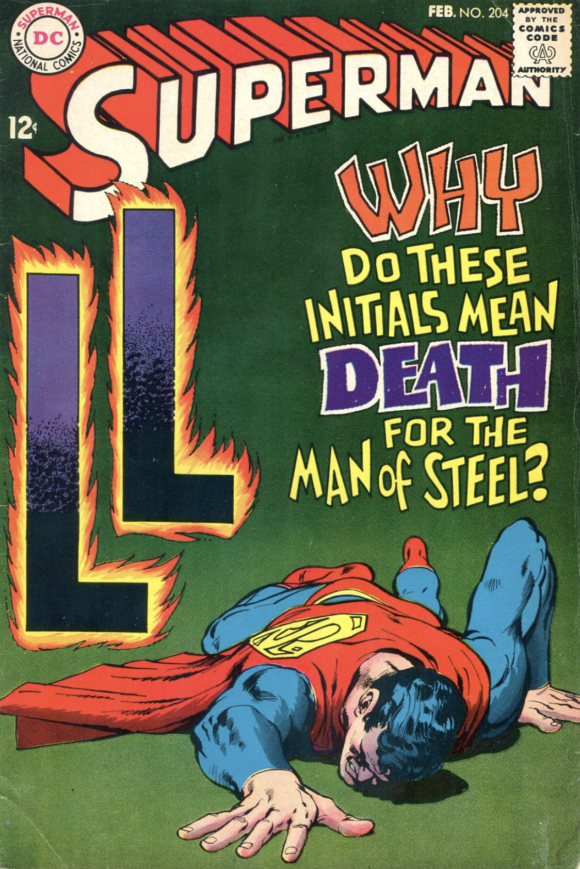 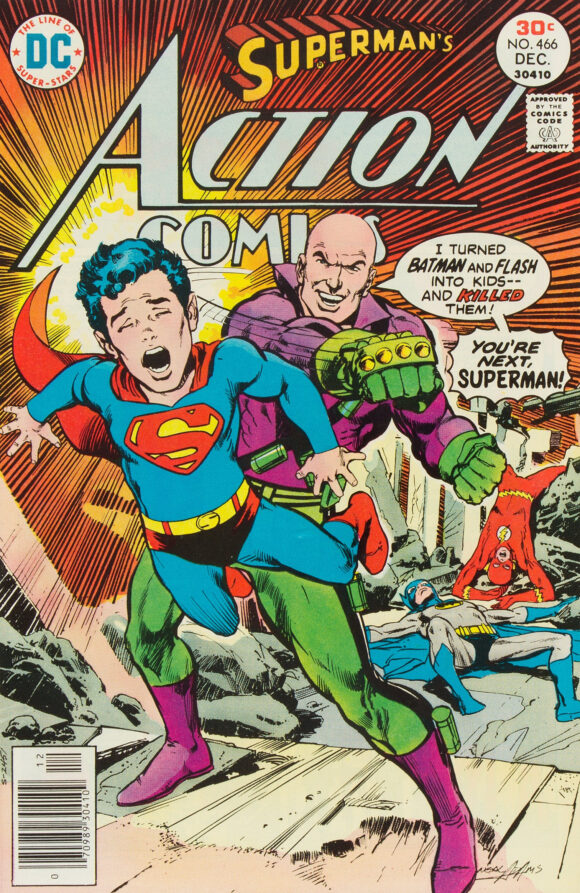 6. Justice League of America #74. As noted above, I largely left team and team-up books off the list but this one is so focused on the Man of Steel that it was impossible to exclude. What incredible power in the foreground showdown between the Supermen of Two Worlds. 5. Action Comics #361. The house ad for this cover also caught my attention way back when. Superman is often shown in defeat on covers — drama, you know — but damn, I don’t know if there’s a better example of him straight-up getting his ass kicked. 4. Superman #317. The tension and rage are palpable. The green skin helps but this one is all about the tense body language. People call Superman the Big Boy Scout, but you do NOT want to piss him off. A brilliant study in coiled tension and anatomy. Outstanding. 3. Action Comics #419. One of the most memorable Superman covers ever. I got this when it came out in 1972 and put the cover on my wall like it was a little poster, which it pretty much is; only the blurbage lets you know something’s amiss (an effective move). Some people would put this at the top and I’d be hard-pressed to argue against it. My only quibble: Murphy Anderson is one of the greatest inkers ever but the end result here is that the Man of Steel’s face looks more Anderson than Adams. Which is perfectly great, obviously, except this list is about Adams. 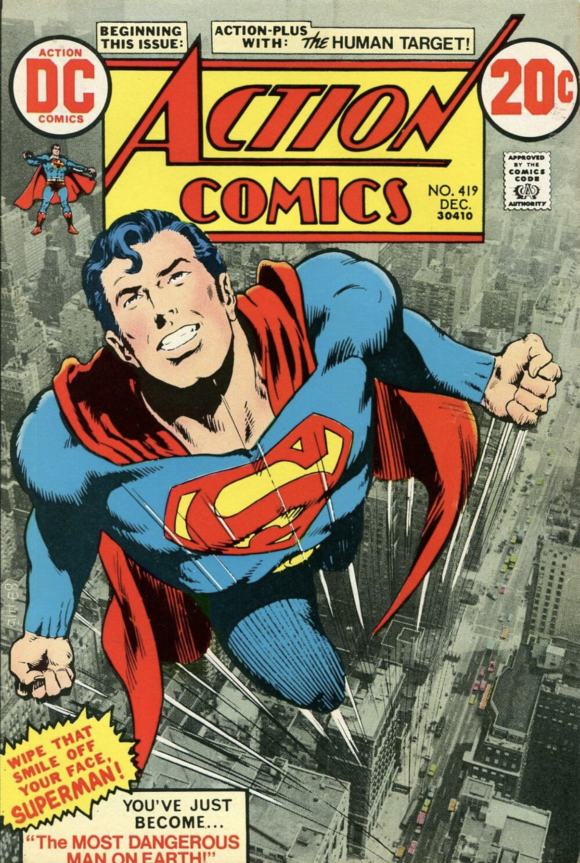 2. All New Collectors’ Edition #C-56: Superman vs. Muhammad Ali. Probably the most painstaking cover of Adams’ career. ALL THOSE FACES. And the Man of Steel going up against the Greatest ain’t too shabby either. An absolute classic. 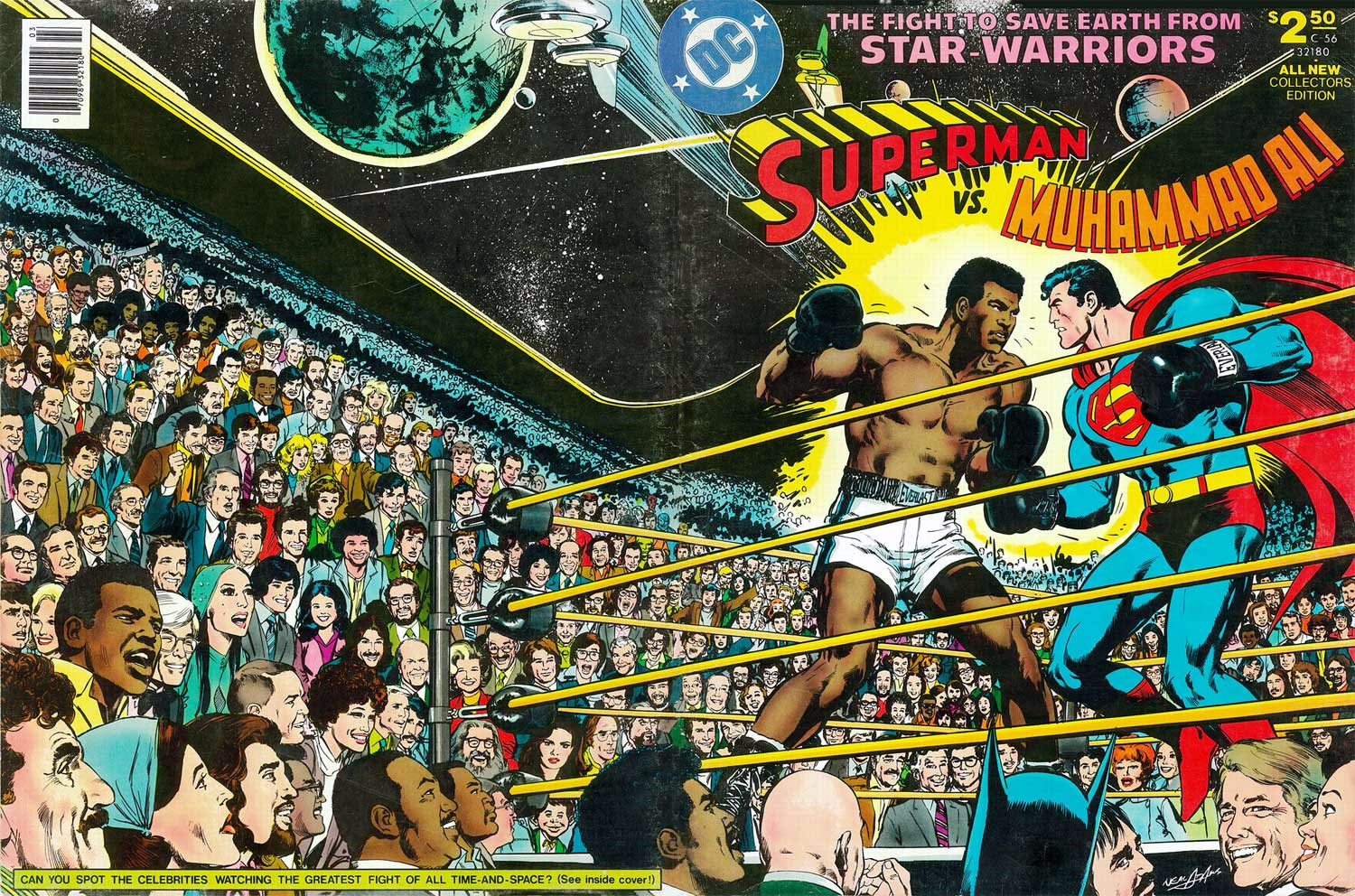