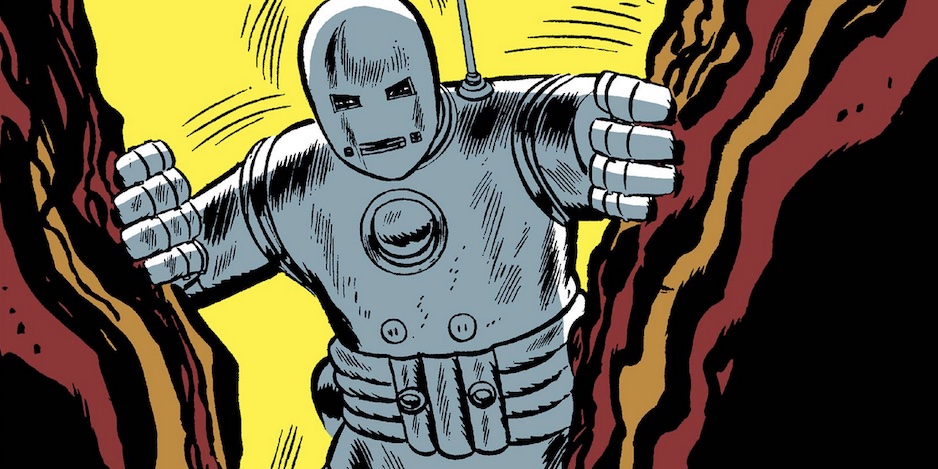 Newly minted 13th Dimension regular Jim Beard is back with another foray into Marvel’s past — this time paying tribute to Larry Lieber, who was born 91 years ago on Oct. 26, 1931.

Jim’s a bona fide expert on the Marvel Age, having worked as a historian for the publisher’s website for 17 years, but his interests go far beyond the House of Ideas. For example, you should most definitely check out his new fantasy novel The Nine Nations, Book One: The Sliding World, available through Amazon. 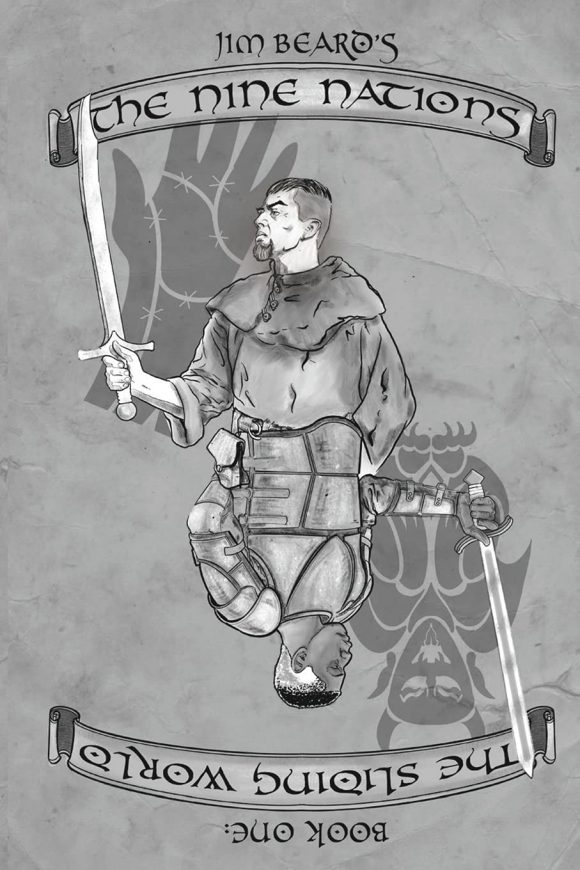 In the meantime, though, check out Jim’s salute to an unfairly underappreciated writer (and artist):

In some circles, writer-artist Larry Lieber is primarily known as the brother of Stan Lee, but for my money, Larry’s one of the unsung architects of the Marvel Universe as we know it—and it’s about time he got more credit for that.

So, True Believers, here’s a little birthday bash for one of the guys who was right there in the beginning of the House of Ideas, and helped shepherd a whole crazy clutch of cavortin’ characters into the hearts o’ millions!

Dig these TOP 13 MARVEL CHARACTERS Co-Created by LARRY LIEBER, in no particular order:

(NOTE from Dan: “Co-created” can be a loaded term and we’re well aware of the controversies of the Marvel Age. But in this particular case, Lieber had a hand in the first appearance of every one of these characters, either as scripter, artist or perhaps even more.)

Thor.  Whew! You don’t get much bigger than this one, do ya? Lieber scripted the very first appearance of Marvel’s Thunder God in Journey Into Mystery #83, and, as legend tells it, even gave his all-too-human alter-ego the name Dr. Don Blake. By Asgard, how momentous! 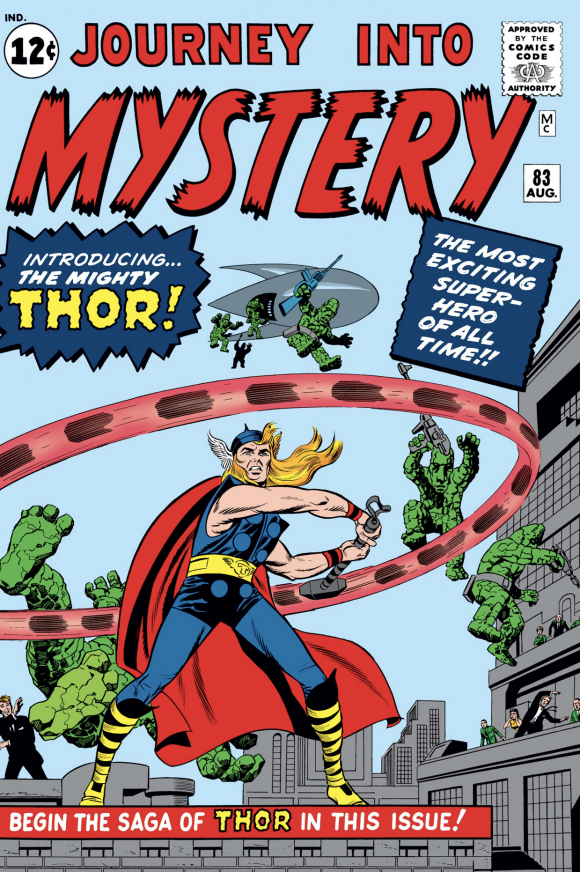 Jane Foster. Hot on the heels of his debut, the Mighty Thor received his first mortal lady love in Journey Into Mystery #84, nurse Jane Foster. Lieber tells us she’s beautiful and all that, but despite her yearning for Dr. Blake, she’s no pushover when it comes to being belligerent to bumbling baddies who try to use her to force Thor’s hand in the “war-torn South American country” of San Diablo. 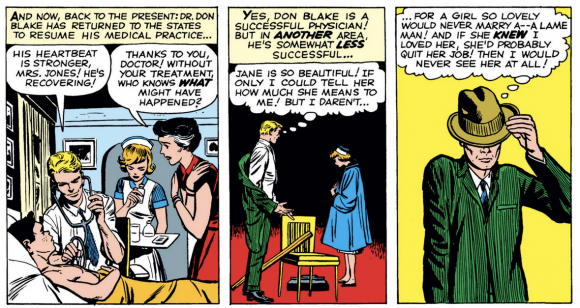 Loki. Leaving no time for any early Marvel fan to catch his or her breath, Lieber scripted the first appearance of Loki, evil God of Mischief, in Journey Into Mystery #85. He also wasted no time telling us just how bad this guy is—and egotistical! Interestingly, Loki and Thor are not yet described as brothers here, which is fascinating considering the relationship between the issue’s scripter and plotter! 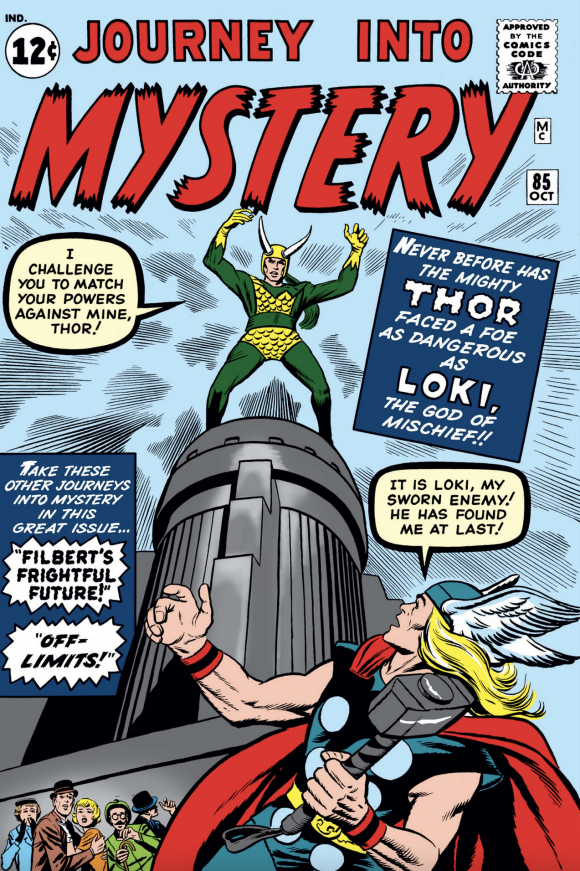 Heimdall. By now you’re probably saying, “Wow! Was Larry Lieber there on the ground floor for all of the Thor family of characters?” Well, Marvelite, pretty much, as this entry illustrates. It’s brief, but Journey Into Mystery #85 also debuted the House of Ideas’ version of Heimdall, whom Lieber describes as the “warder of Bifrost.”

Odin. The hits just kept on comin’ from Lieber & Co. when in Journey Into Mystery #86, Thor went up against the so-called Tomorrow Man and had to put in a collect call to his daddy to get him out of a jam. In our first look at the Ruler of Asgard, he clues his storm-lovin’ son in on how to time travel… which Lieber punctuates with the most “thees” and “thous” used in the strip up to that point in… wait for it… time. 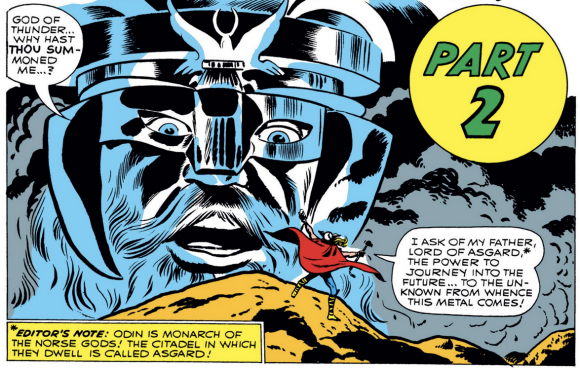 Groot. Let’s switch gears here for a moment and get to the, ahem, root of Larry Lieber’s greatness, the terrifying twig known as Groot! That’s right, bunky; our guy scripted Tales to Astonish #13 back in 1960, the very first sprout of the alien tree who many years later would go on to fame and fortune on the silver screen. 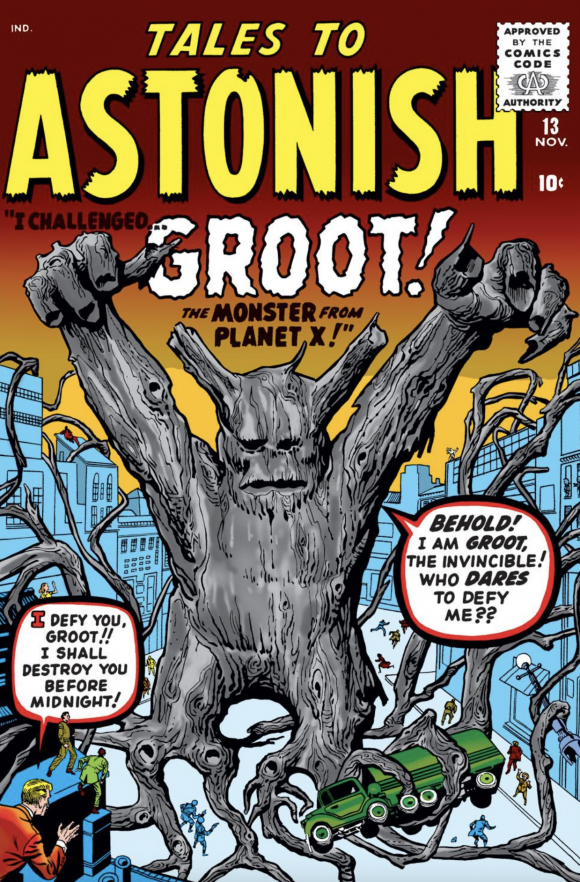 Hank Pym. Yep, Lieber was here, too—just like Kilroy, but prettier. Although Larry scripted the first appearance of the costumed cut-up called Ant-Man in Tales to Astonish #35, it’s not as widely known that he also penned the bashful bon mot titled “The Man in the Ant Hill!” in the now-legendary Tales to Astonish #27. 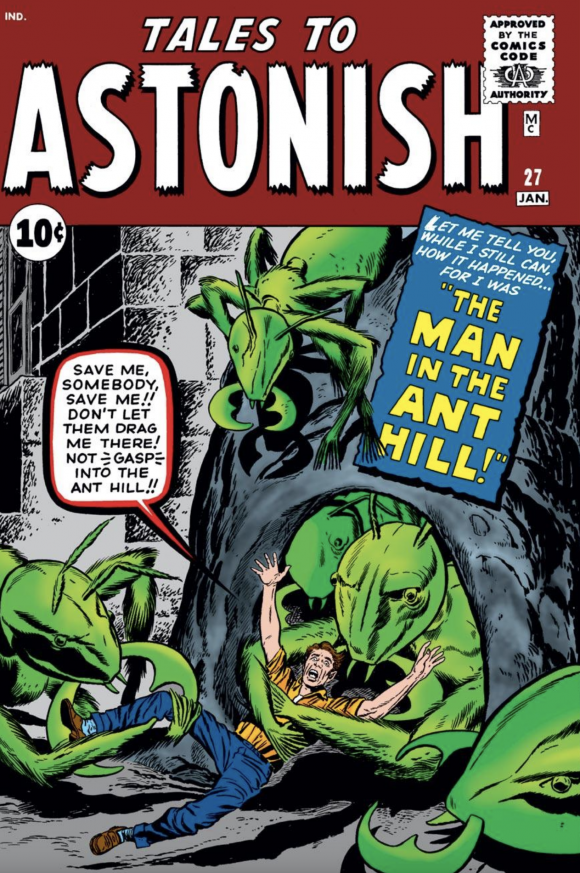 Egghead. In the early days of Ant-Man’s astonishing adventures, villains who could stand the test of time were few and far between—crafty commies and alien invaders, we’re lookin’ at you—but in Tales to Astonish #38 Lieber helped usher in Egghead, a cornball criminal who leapt out of the frying pan and into infamy several seasons later to complicate Hank Pym’s life beyond comprehension. 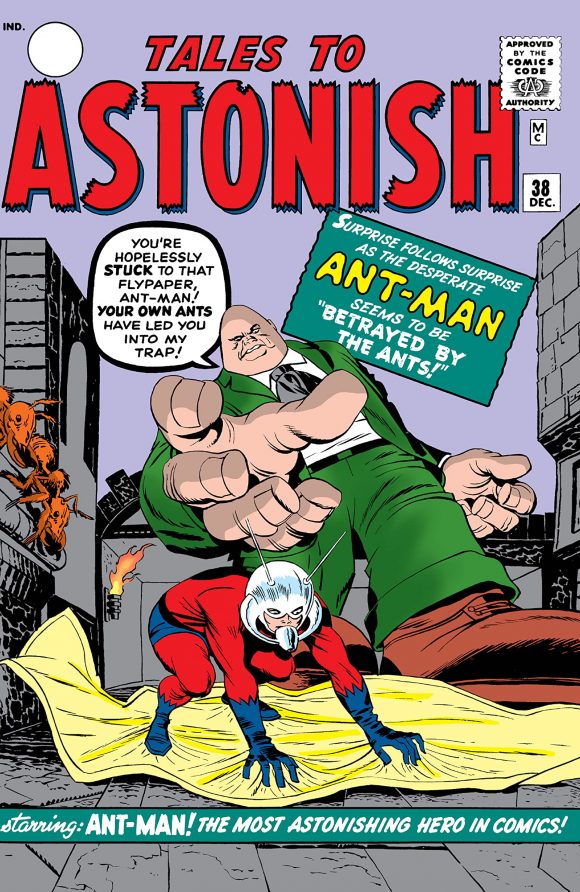 Iron Man. Okay, yeah—big-big. It’d be incredible enough that Larry was in on the creation of Thor, but the Golden Avenger himself, Iron Man? S’truth! Take a gander at the credits for Tales of Suspense #39 and you’ll see we’re not just pulling your transistorized and armored leg, Charlie! And Lieber even dreamed up the name “Tony Stark,” too! How’s that for, heh, stark reality? 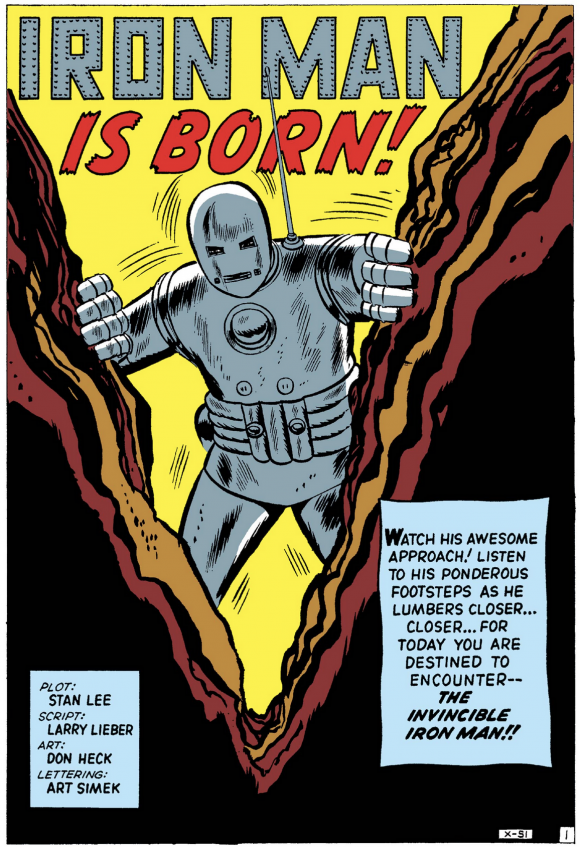 Ho Yinsen. On the rambling road of Marvel Comics history, where Tony Stark goeth, the man who helped him into his first suit of armor can’t be far behind. Lieber’s Professor Yinsen is described as a “great scientist” and he proves his mettle by aiding in the fashioning of Iron Man’s metal — and sacrifices himself so a hero with a lot of heart could be born. 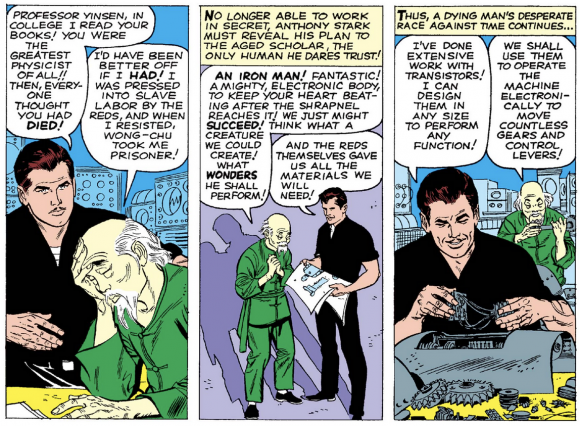 The Wizard. Lieber scripted the first seven issues of the Human Torch’s first solo strip in Strange Tales, and in doing so added a few baddies to the Fantastic Four’s frantic furrow of fiendish foes. Strange Tales #102 marks the first appearance of the Wizard, who then was a creepy guy with a lot of cool inventions, not yet the “Wingless” Wizard of later Fearsome Four fame. 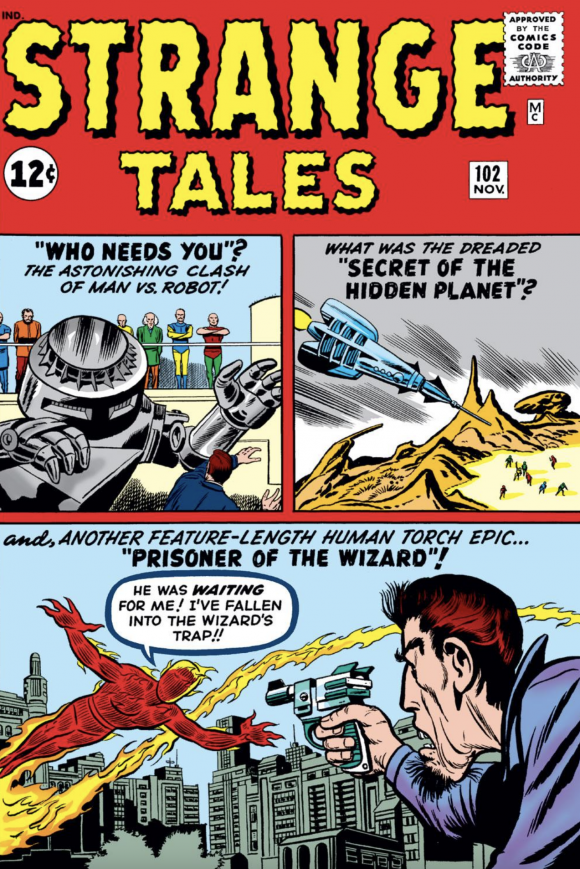 The Trapster. Oh-HO, you scream! In Strange Tales #104 the villain in question was pasted with the moniker of “Paste-Pot Pete,” not Trapster! While this is true, it’s also true that Larry helped launch this loser into many decades of defeat at the hands of not only the Fantastic Four, but a sterling society of superheroes to boot. Ahh, for this one, Lieber deserves immortality… 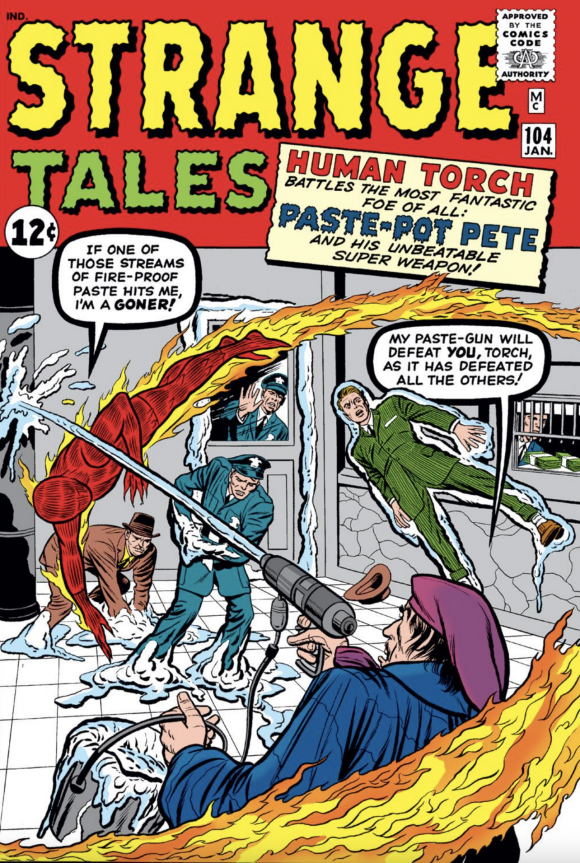 The Parkers. All right, I’m cheating a bit, giving you a couple in a single bound, but what a way to end this tribute to Larry Lieber’s achievements — pencilling the very first appearance of Peter Parker’s peerless parents, Richard and Mary. Besides, you wouldn’t want to split up this duo, wouldja? Anyway, we first saw them in flashback in 1968’s Amazing Spider-Man Annual #5, a revelation of why and how Peter’s parents weren’t around to raise him. 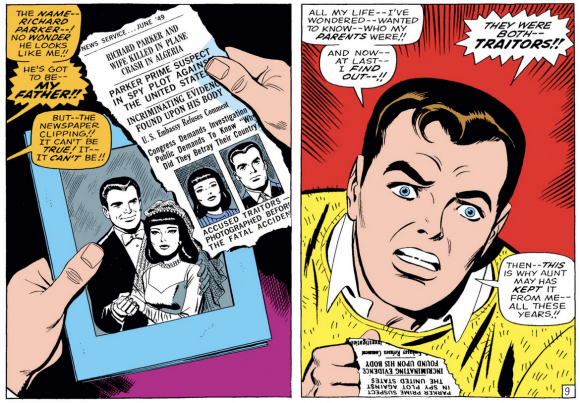