Werewolf by Night! House of Mystery! Tomb of Dracula! And MORE! 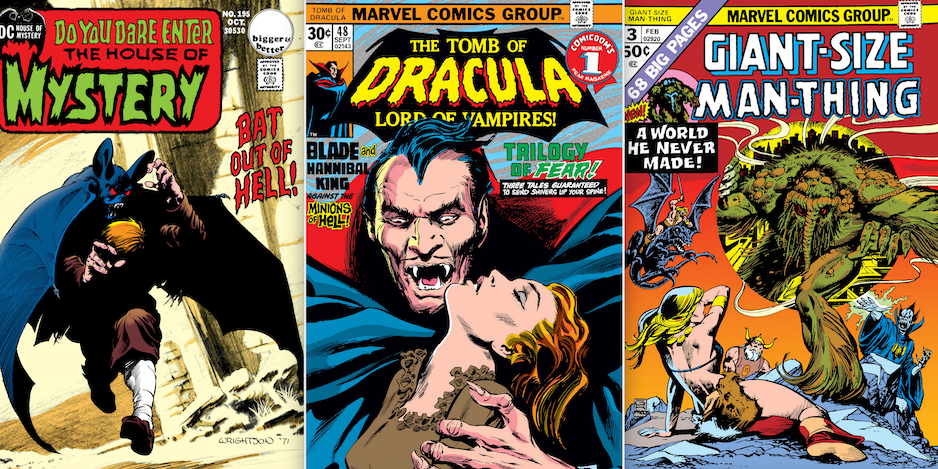 Y’know what I dig? Modern comics projects by talents who love the classics.

Take, for example, Beasts of the Black Hand: The Viking League, created by sculptor/artist Paul Harding and written by Ron Marz, with art by Matthew Dow Smith and colors by Nanjan Jamberi.

The project – which is on Kickstarter – is a sequel to Beasts of the Black Hand, which was successfully crowdfunded in 2017.

“In Volume 1 of the horror/espionage tale, we met British secret agent Oswald Rayner, who was called into action to stop the evil cabal of sorcerers known as the Black Hand from spreading its malign influence across post-World War I Europe,” the official description reads. “Rayner, along with his compatriots Biffy Dunderdale, Oleda  Marchand, and American war hero Henry Johnson, thwarted Maria Rasputin and the Black Hand’s plans.

“The Black Hand disappeared into the shadows… and regrouped. Now, in the spring of 1920, in a world rife with black magic, horrific monsters, and dieselpunk technology, creatures commanded by the Black Hand are rampaging across Eastern Europe, moving ever westward.”

Naturally the project has all sorts of great extras, such as variant covers by talents like Tom Mandrake, art prints – even sculptures. Click here to check it all out, because if you dig classic comics horror, you’ll dig this. But I’m of the mind that the Golden Age of horror comics is the ’70s, as the Comics Code loosened and groundbreaking creators like Bernie Wrightson, Neal Adams, Gene Colan and Mike Ploog revitalized the genre.

So, Harding is here with (fittingly) a sequel: THE TOP 13 HORROR COMICS SERIES OF THE 1970s – RANKED.

13. Adventure Into Fear, Marvel. Man-Thing was the star for a while (with that glorious Neal Adams cover on Issue #11), but ceded the title to Morbius the Living Vampire, fresh off his introduction in Amazing Spider-Man. Who would’ve thought that all these years later, Morbius would have his own film waiting in the wings? 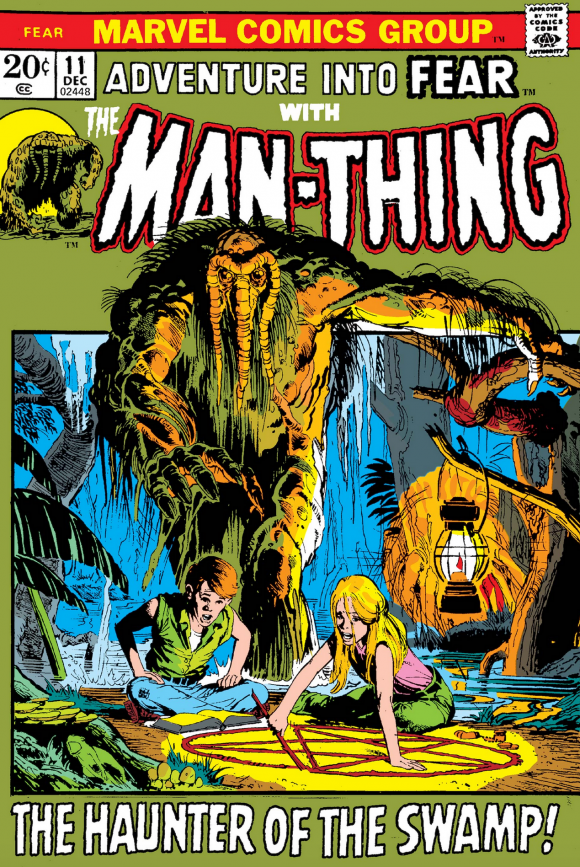 12. Son of Satan, Marvel. If the literal son of Satan was now a superhero, it had to be the 1970s, and it had to be Marvel. Daimon Hellstrom’s first appearance predated the release of The Exorcist and The Omen — there was definitely something devilish in the ‘70s zeitgeist. Now, of course, he’s getting is own TV series. 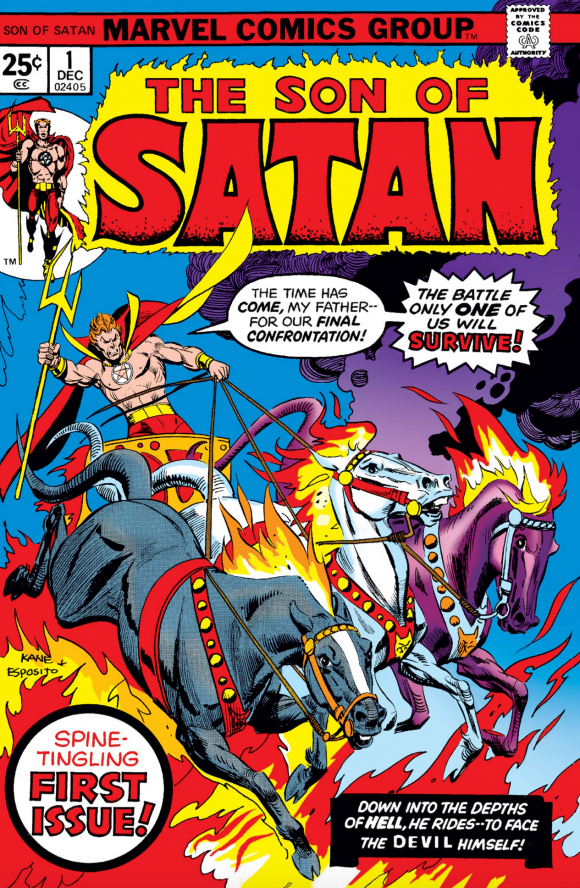 11. Strange Tales, Marvel. The title came back a few years after losing Dr. Strange as its lead feature, and launched the now-cult character Brother Voodoo (as well as the certainly strange Golem). Though the Voodoo run only lasted a few issues, we got to see Gene Colan work his magic. 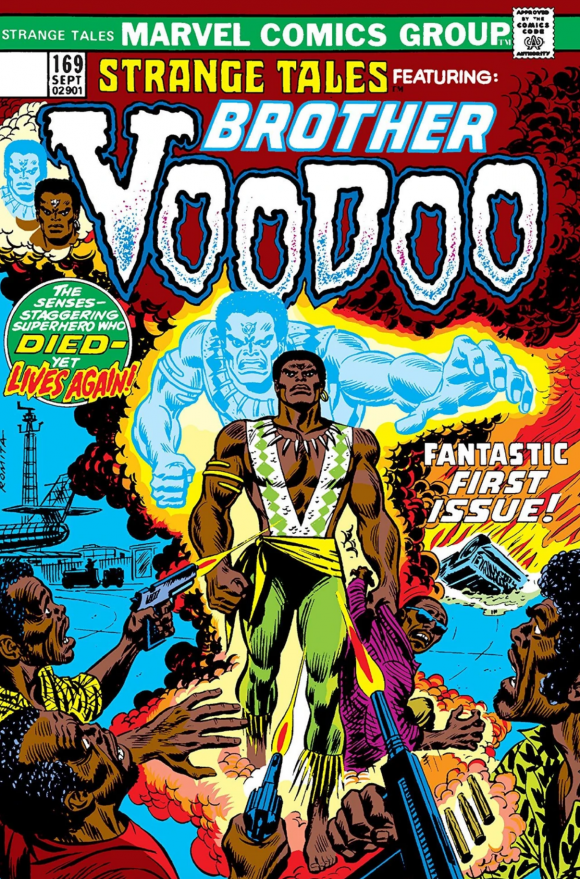 10: Weird War Tales, DC. A veritable platoon of crazy horror stories, narrated by Death himself dressed in various uniforms. Look for Issue #36, with the evergreen story “The Pool,” drawn by the great Russ Heath. 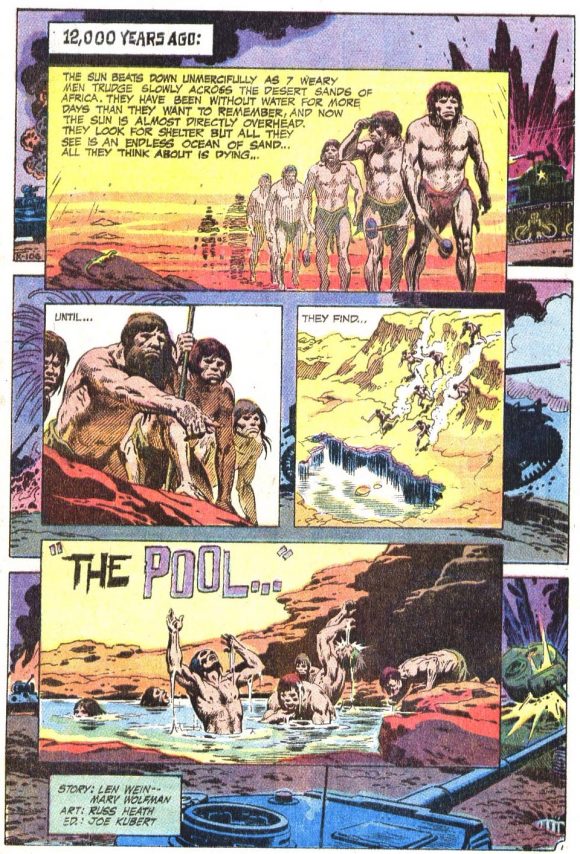 9. Werewolf by Night, Marvel. Debuting in Marvel Spotlight, Jack Russell (really?) became an unexpected hit under the creative guidance of Gerry Conway and Mike Ploog. Never quite the success that Tomb of Dracula was, it was still a solid runner-up in Marvel’s horror sub-verse. 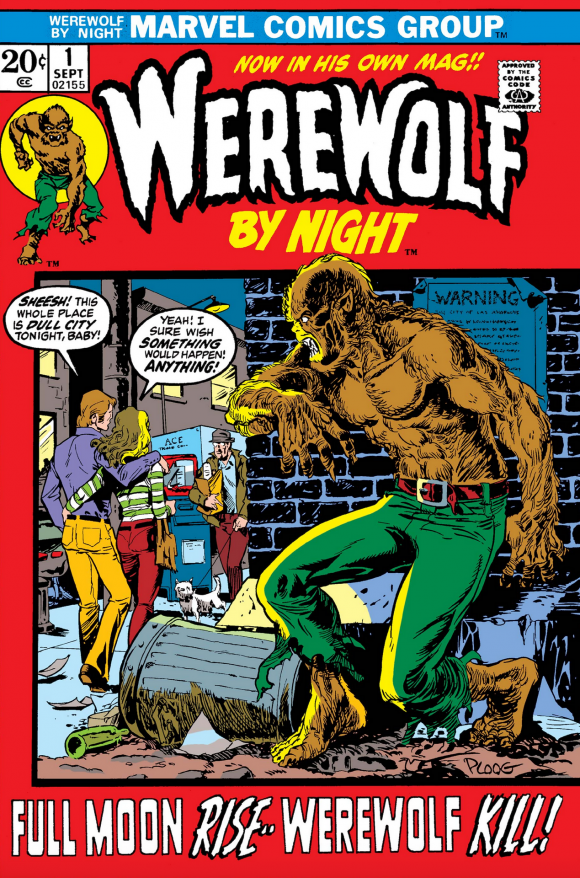 8. Dracula Lives!, Marvel. If you wanted your Marvel Dracula with some partial nudity and a little more graphic violence (and, let’s be honest, who didn’t?) this was the place. Marvel’s black-and-white magazines almost uniformly featured great painted covers, and Dracula Lives! was no different. 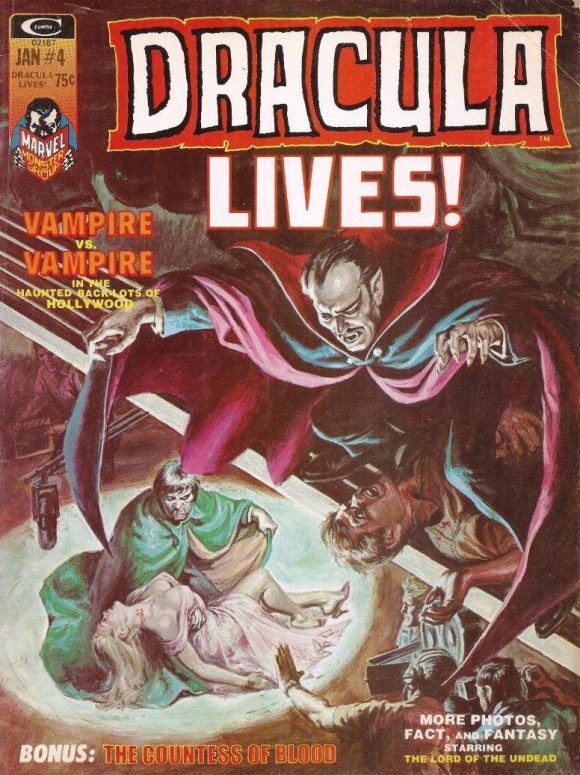 7. House of Mystery, DC. DC’s horror anthology stood to toe to toe with what Warren was putting out, even if they couldn’t push the envelope quite as far. Classic stuff by Neal Adams and Bernie Wrightson, much of it under the editorship of Joe Orlando. 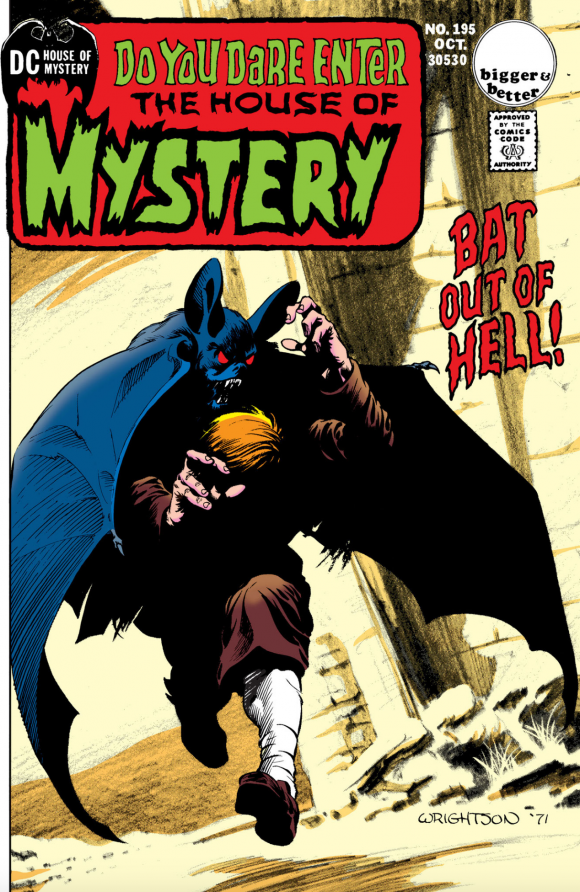 6. Creepy and Eerie, Warren. Throwbacks to the days of classic EC horror, Warren’s anthologies were a Who’s Who of 1970s comic talent, and for a while, the best in the business. 5. Vampirella, Warren. Part of the Warren horror line along with Creepy and Eerie, the obvious titillation factor (not to mention that Frazetta cover on 1969’s Issue #1) got you in the door. But you stayed for the Archie Goodwin stories during his classic run. 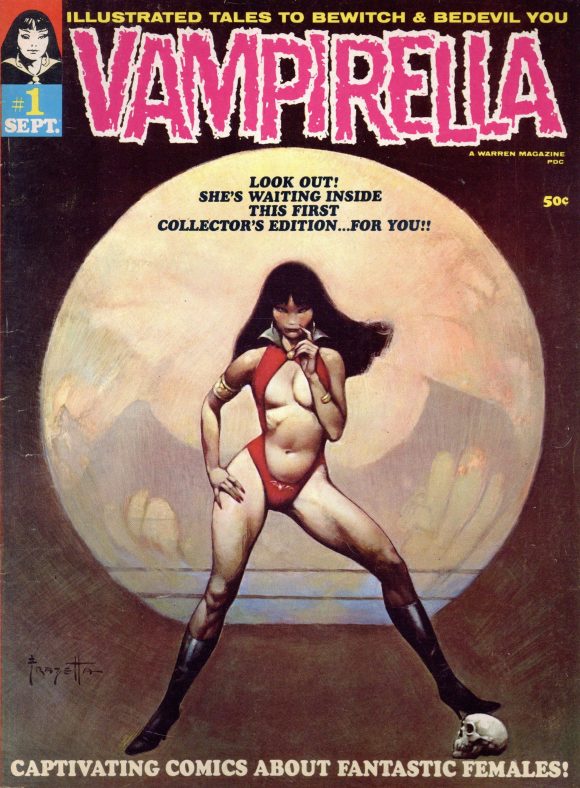 4. Man-Thing, Marvel. Marvel’s muck monster graduated to his own series in the horror-centric era. Introduced right around the same time as DC’s Swamp Thing, the character found its footing — no pun intended — when Steve Gerber took over the scripting. Who can forget the immortal Giant-Size Man-Thing? 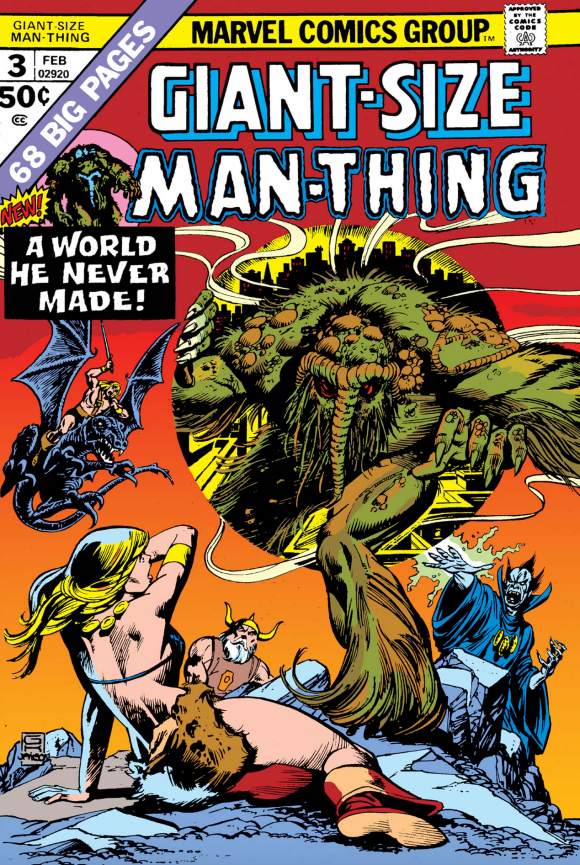 3. Ghost Rider, Marvel. Sometimes you sell your soul to the devil and you go to hell. Sometimes you become a superhero. Probably the best melding of horror and superhero in any cohesive universe, with a little Evel Knievel (another ’70s touchstone) thrown in for good measure. Johnny Blaze was cursed, but he made it work him. 2. Tomb of Dracula, Marvel. The handbook for how to do a horror anti-hero as the lead for your series. Brilliant work from Marv Wolfman and Gene Colan for nearly 70 issues (Marv didn’t take over as writer until a few issues into the series). 1. Swamp Thing, DC. The all-time classic from Len Wein and Wrightson. Even if the story was terrible (which it most definitely is not), it would still be worth it just for the Wrightson artwork, dripping with forbidding shadows and swampy atmosphere. Glad Swamp Thing is finally back in the DCU. For more info on the Beasts of the Black Hand: The Viking League Kickstarter, click here.