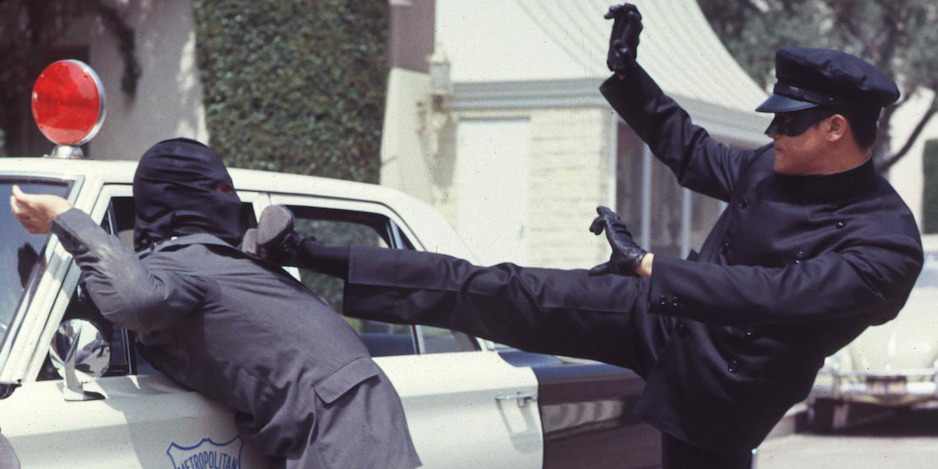 I won’t hide it, I always preferred The Green Hornet television series over Batman. It may be foolish for me to say that, when there are so many are great fans of the latter series, but the program did the one thing that I wanted: It treated the characters seriously. Don’t get me wrong, I watched and enjoyed both but I liked my superheroes without a single “BAM!” or “POW!” Regrettably, the ABC-TV show ran only one season, from September 9, 1966, to March 17, 1967. Van Williams starred as Britt Reid/the Green Hornet, with Bruce Lee as Kato, Wende Wagner as Casey, Walter Brooke as District Attorney Frank Scanlon, and Lloyd Gough as Mike Axford.

13. The Secret of the Sally Bell. When a criminal, who is the only one to know the location of $2 million in narcotics on board a ship, is injured and comatose, members of his gang kidnap him from the hospital with a hospital doctor to revive him long enough to reveal the location. The Hornet and Kato fight to save her and get the narcotics. The episode is one of those that could have done with a longer format in order to provide more depth to the characters, but still does a good job squeezing events into half an hour. Trivia: At one point, a gang member is watching a Batman episode on TV. (Gang Boss: “We got a fortune riding on a deal and you’re watching Batman?!”) 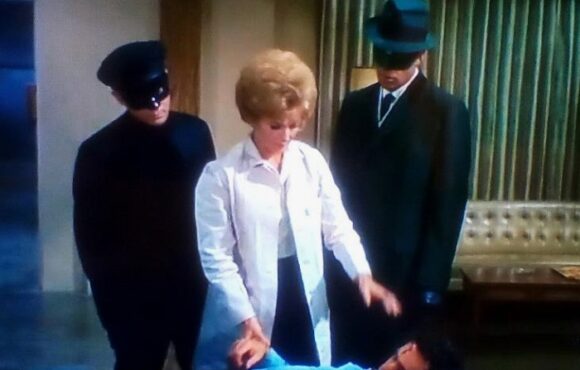 12. The Hunters and the Hunted. Four big-game hunters are methodically stalking and killing the city’s top ganglords… and since the Hornet is considered a criminal, he is next on their list. Trivia: Robert Strauss, who played greasy bad guy Bud Crocker in this episode, was a regular guest star on TV programs but was probably most famous for playing the POW “Animal” in the Broadway and film productions of Stalag 17. 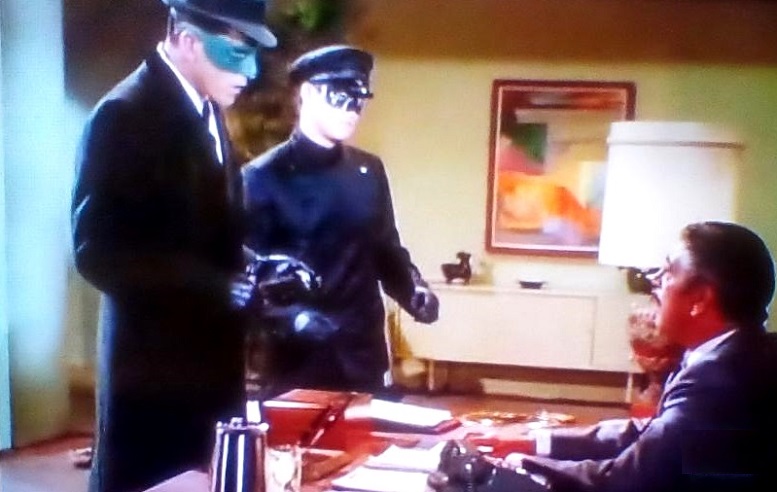 11. The Silent Gun. The first broadcast episode of the series has the Hornet and Kato trying to get ahold of a gun that has no noise or flash to give away its presence when fired. This is one of those episodes where the Hornet is up against not just one, but two gangland leaders, taking both down at the same time. (However, their criminal gang budget never seems to be able to afford more than just one underling each.) 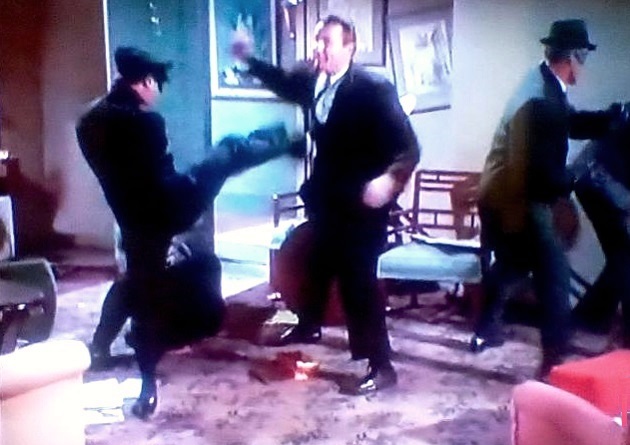 10. Trouble for Prince Charming. Love comes to Britt’s friend (Susan Flannery) when a foreign prince flies to the city to wed her, and all seems good until an assassination attempt on the prince’s life and the kidnapping of his bride-to-be cause havoc with their planned wedding. Of course, if you have ever seen any movies or TV shows, you know that the prince’s cabinet is full of vultures ready to murder him and take his place. But they did not consider the Hornet would take an interest in the wedding proceeding as planned. Trivia: Flannery was a regular for 32 years on the soap opera The Bold and the Beautiful and was on Days of Our Lives for 10 years. And, despite his polished foreign prince manner in the episode, Edmund Hashim was actually born in Haverhill, Massachusetts. 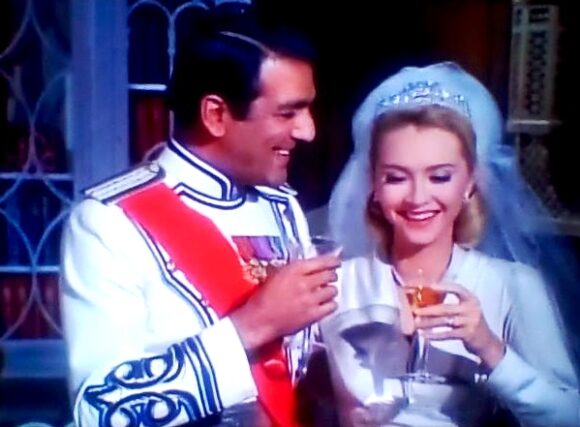 9. Beautiful Dreamer, Parts I and II. Wende Wagner gets a chance to shine in this episode when she is brainwashed by Peter Eden, who uses his rest care facility to feed subliminal messages into the minds of his clients to commit crimes. And he uses Casey as an instrument to shoot Britt when his investigation into Eden’s criminal operations gets too close. Trivia: Several years prior to Green Hornet, Wende Wagner was an underwater stunt double for actresses appearing on Sea Hunt and The Aquanauts. 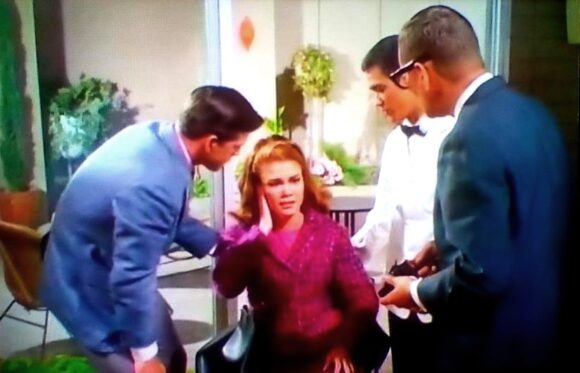 8. The Frog is a Deadly Weapon. A supposedly deceased gangster, who framed Britt Reid’s father, turns up alive and the Hornet starts an all-out manhunt for him. This was an excellent serious episode for Van Williams. Trivia: Victor Jory, who played the title role in the 1940 movie serial The Shadow, was the villain here. 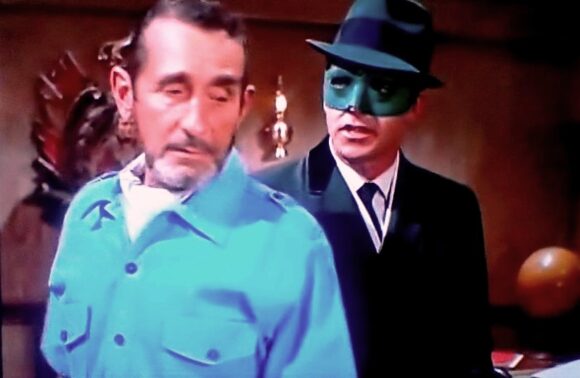 7. The Ray is for Killing. When crooks rob Reid’s home of valuable paintings that he was helping to auction off for an art dealer, the Hornet gets involved. The trouble is the criminals are armed with a laser that can even affect the Black Beauty. This is a superior episode that leads to Casey being kidnapped and the Black Beauty facing off against the laser beam at its highest intensity. Trivia: The Black Beauty was a modified 1966 Imperial Crown customized by Dean Jeffries, who also worked on the design of the Batmobile (which was completed by George Barris). 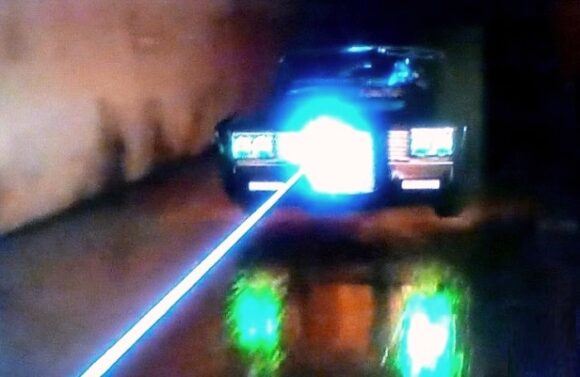 6. Hornet, Save Thyself. A perfect frame-up job highlights this episode when, in front of a roomful of witnesses, Britt appears to shoot and kill a man he despises. And the man behind the plan gets to take over his job as publisher of the Daily Sentinel, doing what he can to corner Britt for the police. To me, this is one of the best episodes because it diverts from the standard storyline of the Hornet secretly aiding someone else. Here, Britt has to clear himself of the charge of murder, when even the District Attorney was present to see the shooting. 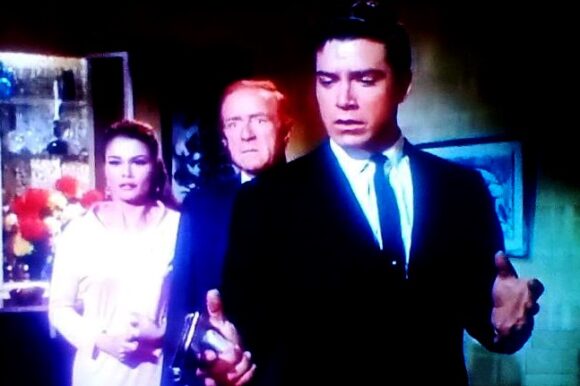 5. Corpse of the Year, Parts I and II. What could be better than an episode with two Green Hornets and two Black Beautys? Okay, not as good as Jill St. John in a Robin costume in the Batman premiere, but still this two-part story has a fake Green Hornet throwing a grenade into the newsroom with Mike Axford in it and then murdering a rival newspaper publisher, thus framing the real Hornet. Trivia: Barbara Babcock, who plays Britt’s sophisticated date in the opening (and in another episode), was later a semi-regular on Hill Street Blues. For the role of Grace Gardner, the seductive girlfriend of Sgt. Phil Esterhaus, she won the Emmy Award for Outstanding Lead Actress—Drama Series. 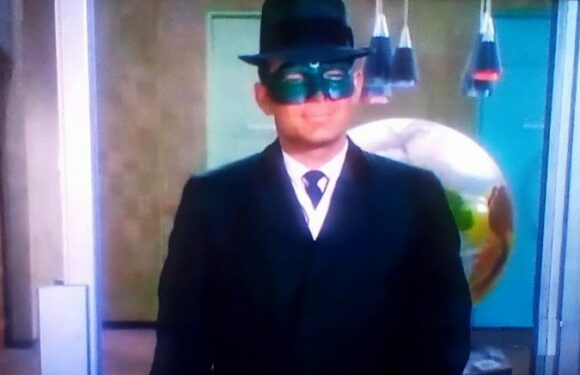 Tom Simcox as the fake Hornet

4. Bad Bet on a 459 — Silent. While investigating a pair of crooked cops, the Green Hornet is shot in the shoulder but Britt Reid can’t get medical help because people would realize he is the Hornet. The best moment of the episode is Lee’s when he get a dramatic moment as Kato bursting into the Daily Sentinel pressroom, then pretending to shoot Reid in revenge for his editorial on the Hornet, thus setting up the reason for the bullet wound. 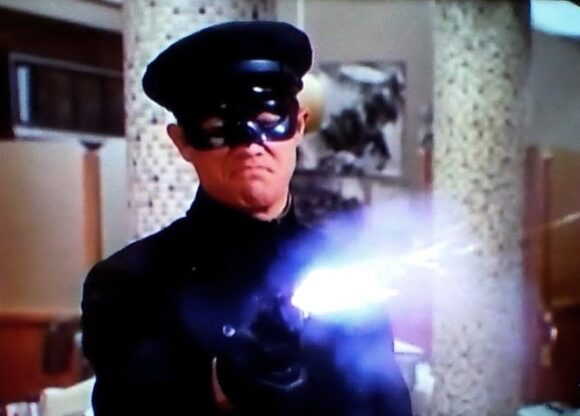 3. Alias the Scarf. When the Green Hornet and Kato are made the new exhibits of a wax museum, the one-time popular exhibit of a wax figure of a notorious strangler, the Scarf, seems to take on life and start a new series of killings in the city to recapture his glory. It is clear who the Scarf really is as soon as the museum’s historian stands next to the figure — and by casting former horror film star John Carradine. However, even with Carradine stealing almost every scene he is in, there was an equally memorable performance by Patricia Barry as a tragic woman who once was the consort of the Scarf but whose life has since come to nothing. Add to that, the episode has more fog-laden atmosphere than a dozen movies set in old London. 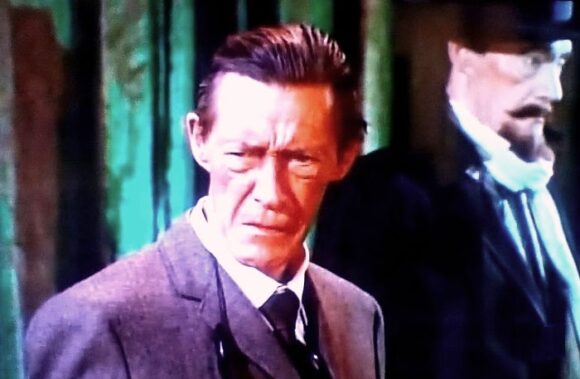 2. The Preying Mantis. A Tong gang demands protection money from a Chinatown restaurant owner, whose family is known to Kato. This episode has the longest fight for Kato in the series and is a favorite with Lee fans as he takes on the Tong’s new leader (played by Mako, but who is clearly doubled during the fight). Trivia: In 1965, Mako co-founded the L.A. theater group, East West Players. In 1967, he was nominated for a Best Supporting Actor Oscar for The Sand Pebbles (1966) and a decade later he received a Tony Award nomination for Best Actor in Stephen Sondheim’s Broadway musical Pacific Overtures (1976). Tom Drake, who played gangster Duke Slate, is best remembered for being “The Boy Next Door” in the Judy Garland movie musical Meet Me in St. Louis (1944).

1. A Piece of the Action/Batman’s Satisfaction – Batman (Season 2). I have to give the #1 spot to the Batman series’ two-episode story where Britt Reid and Kato visit Gotham City. Britt renews his friendship with Bruce Wayne. Both, though, as the Green Hornet and Batman, are separately investigating the stamp-counterfeiting operations of Colonel Gumm. If you can get past the inane character of the pink-haired socialite Pinky Pinkston and the scenery-chewing Roger C. Carmel as the bad guy, this is a great two-parter, especially the fight with Batman vs. the Green Hornet and Robin vs. Kato in the second episode. (By the way, there was a cameo on an earlier episode of Batman in which the Caped Crusaders were climbing the wall and the Hornet and Kato stuck their heads out of a window to talk to them. No animosity at that point, though.) Trivia: Watch for Alex Rocco and Seymour Cassel early in their acting careers as Gumm’s henchmen. And one of the models at the fashion show was played by Angelique Pettyjohn, better known to Star Trek fans as Shahna, Kirk’s trainer, in the episode The Gamesters of Triskelion.