A birthday salute to an artist gone too soon… 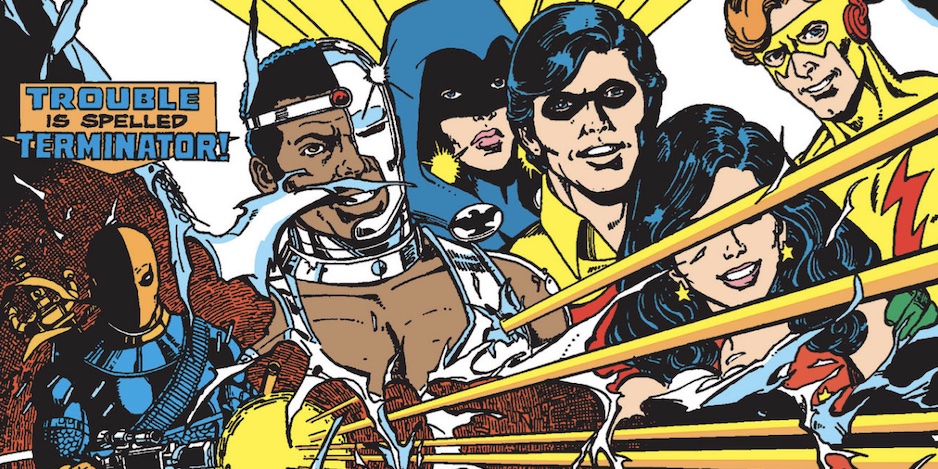 Last month, we ran around 20 stories paying tribute to the great George Perez after he died May 6 at the age of 67. Unsurprisingly, readers responded with great interest, sympathy and kindness.

As it happens, June 9 was Perez’s birthday — he was born in 1954 — and it’s time for his annual birthday tribute. But what’s left to be said that hasn’t been said already and said so recently, here and elsewhere?

Well, as I thought about it, it became obvious. Perez worked on so many projects and with so many characters over the years that everyone seems to have their own favorite. For me, it’s The New Teen Titans, hands down. 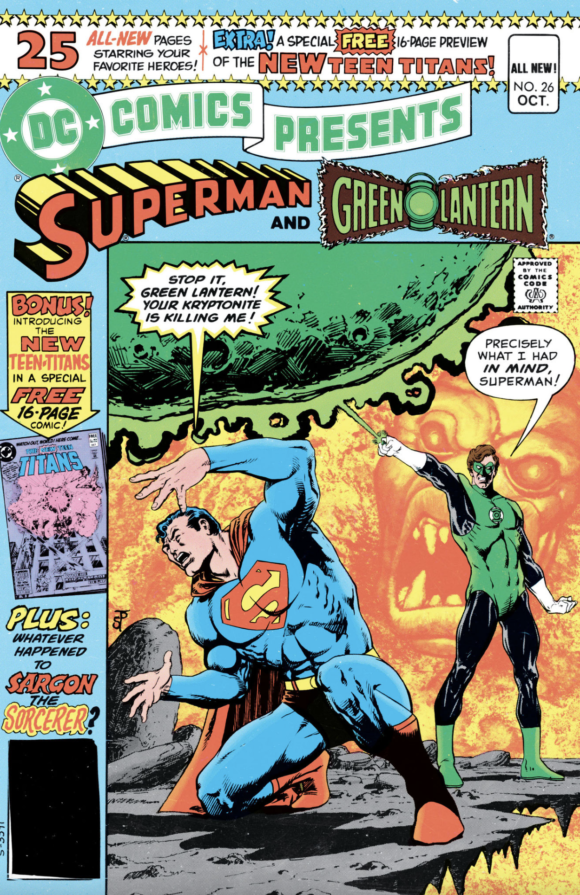 Titans not only introduced me to Perez’s art but the series hit at exactly the right time: It began when I was 13 and hit its peak with “The Judas Contract” — and Nightwing’s debut — when I was 17. What Marv Wolfman and Perez produced was the perfect comic book for a teenager going through growing pains — exactly what NTT was about.

So in celebrating Perez’s birthday, I felt compelled to go back to my own beginnings with one of comics’ greatest artists: THE TOP 13 GEORGE PEREZ NEW TEEN TITAN COVERS — RANKED. 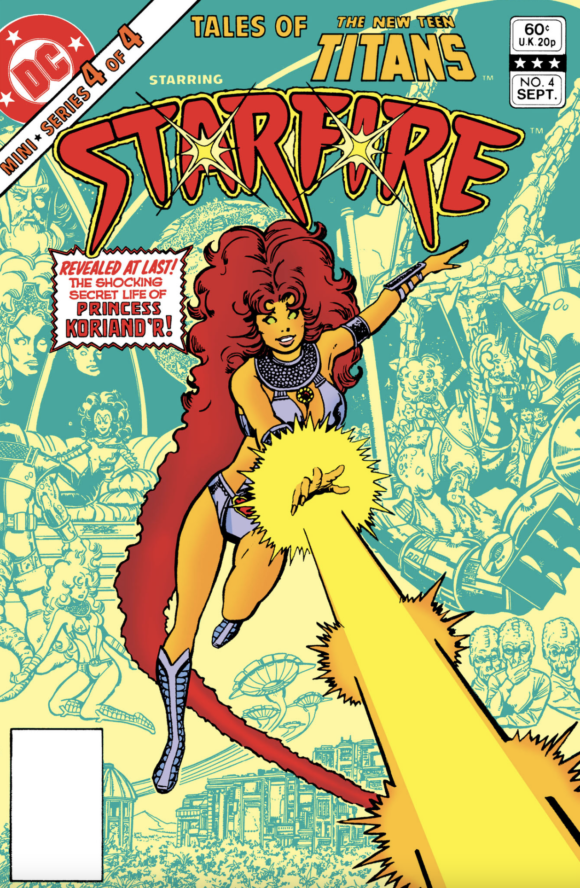 SPOILER ALERT: There aren’t any covers from the Tales of the Teen Titans miniseries, which are fabulous but which share essentially the same layout. How can you pick one over the other? There are also no covers from the NTT Baxter-paper series that launched in ’84. That’s just personal preference.

Naturally, this is subjective and, naturally, you’ll have your own faves. I encourage you to add them in the comments.

13. The New Teen Titans #21. No knock on Night Force but all the extra imagery and verbiage detracts from what is a superb main illustration. In other words, this cover would be higher on the list if that main art made up the whole cover. Because it is chilling. 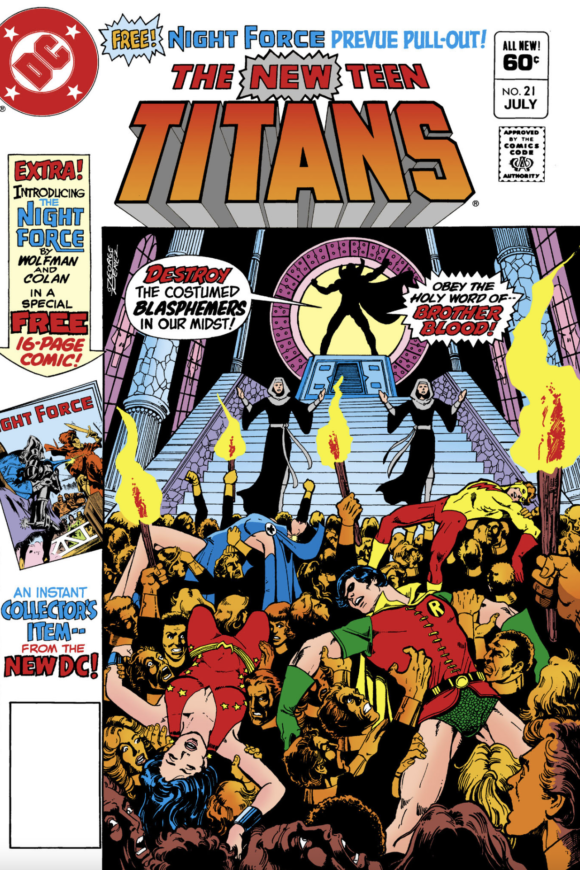 12. The New Teen Titans #2. I remember buying this when it came out and thinking, “Whoever this guy is, he must be really tough if he took out the Titans in their second issue.” And then being shocked that he was dead by the end and that the guy in the back was the real threat. (Looking at these two covers, I guess Perez liked introducing huge villains as tiny little shadows. Works, though.) 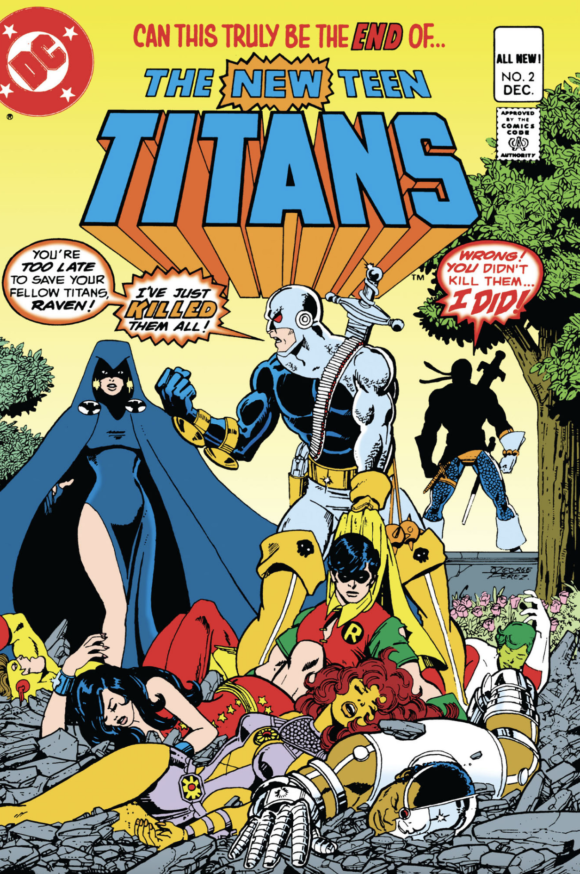 11. The New Teen Titans #8. Both Perez and Marv Wolfman have cited this issue as a turning point in the series, given that it was all about the personal lives of the Titans — an approach that was unconventional at the time. The cover definitely tells you that this is something different while the star-spangled floating heads remind you that, yes, this is a superhero comic. 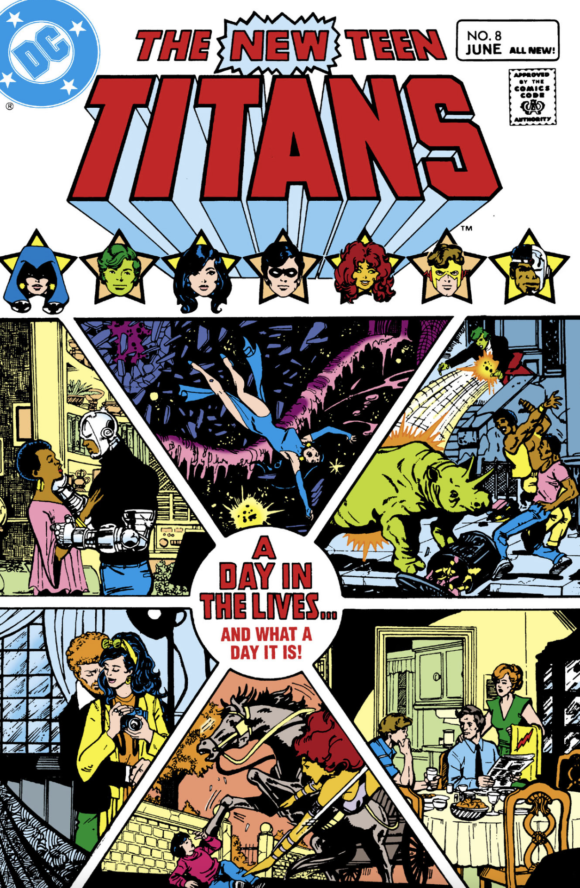 10. Tales of the Teen Titans #44. The first three covers of “The Judas Contract” followed an artistic theme that relied on multiple, crowded images in monochrome. The result is a little too busy for my tastes — and I really think the cover should have been given over to Nightwing’s debut, which was A Really Big Deal. That said, this one of the most important comics of the last 40-plus years, so the cover makes it on that alone. 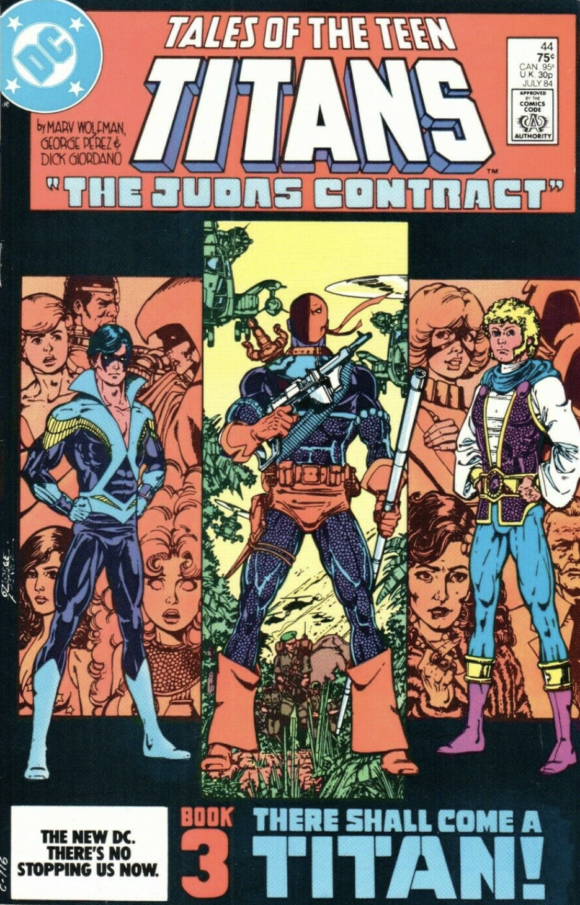 9. The New Teen Titans Annual #1. Two years of build-up and we finally got a satisfying resolution to Starfire’s heroic journey. The painted cover signaled that this was a major landmark for the series — which it was. 8. The New Teen Titans #6. Similarly, the cover of the Titans’ first climactic battle with Trigon made this issue look like an event just six issues in — which it was. 7. The New Teen Titans #30. Terra joins the Titans! Not for long, though. One of the series’ iconic images, and rightfully so, even if Perez did turn out covers that were more artistically riveting. 6. The New Teen Titans #4. The mere idea of the JLA facing off against the Titans was so damn exciting and Perez’s cover promises what the issue itself delivers. (I still love the way Robin took out Green Lantern. Brilliant.) It looks like a riff on Rich Buckler and Jack Abel’s excellent Teen Titans #50 from just a few years earlier — only even more striking. This is DC fan heaven. 5. The New Teen Titans #34. An exceptionally menacing cover that conveys just how dangerous Deathstroke is. It’s a startlingly violent image even though the Terminator is only shooting up a picture of our young heroes. The bloodless, metaphorical nature of it is probably what got it past the Code, but cripes, Changeling even takes it in the face. 4. The New Teen Titans #36. I’m a sucker for illustrations done in negative. I still don’t know how that works because I’m not an artist but it never fails. What seals it, however, is the Titans standing grimly in a downpour. One of the moodiest covers Perez ever did. 3. The New Teen Titans #22. Fabulous way of selling a great — and great-looking — villain, the maniacal Brother Blood. Badass through and through, and the yellow background makes it really pop. Magnificent. 2. The New Teen Titans #39. An Eisner-esque cover that quietly, though powerfully, heralds the end of an era. Beautiful concept, beautiful execution. Wonderful. 1. The New Teen Titans #1. Yeah, I know it’s an obvious choice but it’s one of the most famous covers in comics history. Simple as that.