The Thunderous Talent of RUSSELL DAUTERMAN

The penciller on Thor sits down with us for a MIGHTY Q&A about his rapid rise through the ranks. PLUS! A glimpse at Issue #2 — out 11/12! 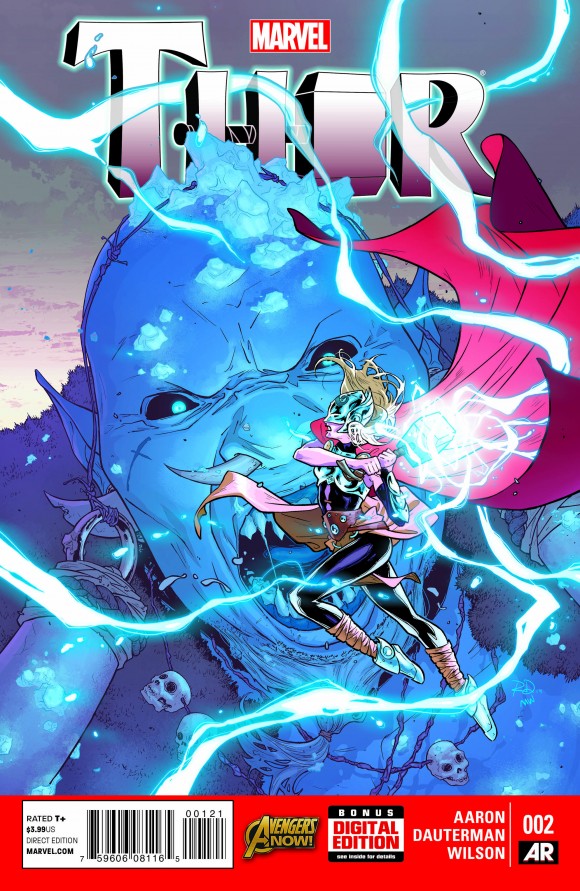 Russell Dauterman, 30, is something of an overnight sensation. He’s done some work here and there but he’s hit it big with Thor — in which he’s teamed with one of the top writers in the biz, Jason Aaron.

Since the announcement that Thor was going to be recast as a woman, there’s been the typical hand-ringing and counter-hand-ringing. To me, that’s all hooey.

What’s important is talent in storytelling and Dauterman has it, big time. I talked with him at New York Comic Con and was immediately struck by how genuinely surprised he is by the amount of attention his work is receiving. 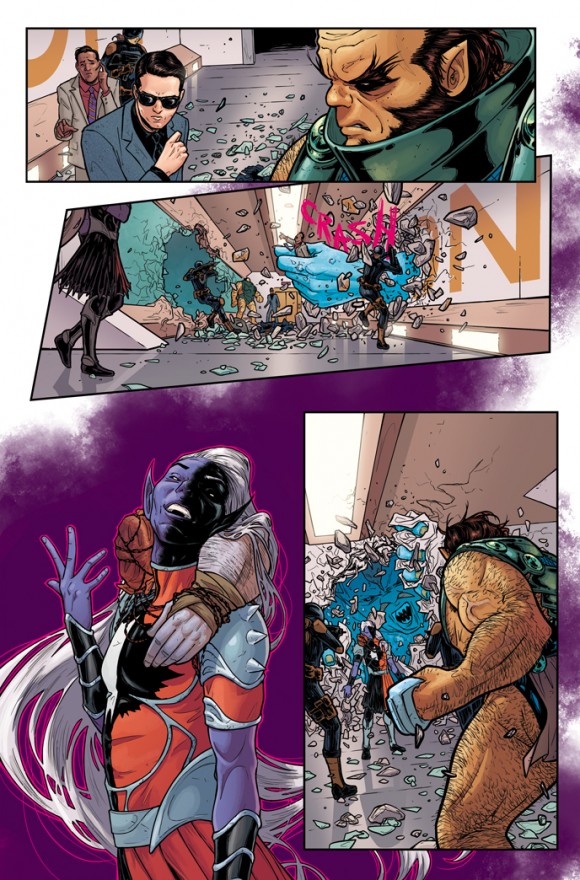 Russell Dauterman: I loved comics. I was at the right age where Batman: The Animated Series, X-Men: the Animated Series and Batman Returns, the movie, all hit, I think, within a three-month time span. I think that was probably my first exposure to super-heroes or anything. I latched onto those, X-Men especially.

So I was 8 when all that happened which was, like, the perfect age to get into all that stuff!

I really latched onto X-Men, I think, because the cartoon so closely mimicked what was happening in the actual comics. Everything looked the same so it was really easy to transition into those comics and I read every title. 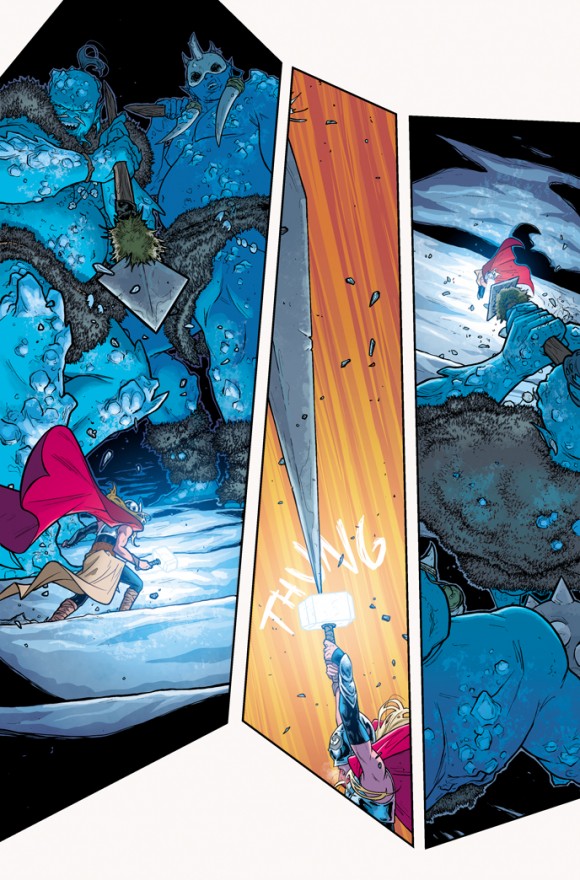 Do you remember what your first title was?

Yeah. I actually don’t remember the issue number but Uncanny X-Men. I think it was John Romita Jr. did the art and the cover. I think it’s two X-Men holding back Colossus like he’s charging against them and I’m pretty sure it was the issue where you opened the comic up and it was a double-page spread that was vertical of Storm, billowing hair, billowing cape … she was my favorite. So that comic just sold me. (Dan laughs) I had to have every comic after that. 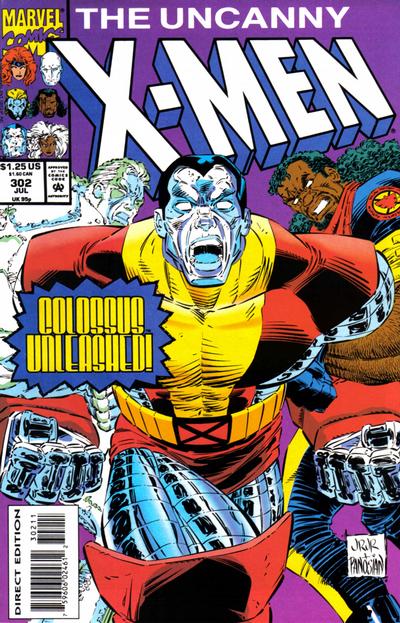 Oh, yeah! My parents retired and I had to get rid of a lot of stuff but I kept all the Uncanny X-Mens that I’d collected as well as the regular X-Men so I still have all those.

So then fast forward. How is it that you got into the business? I mean, it’s a kid’s dream. Whoever picked up a comic wants to do it, but it’s like the Major Leagues. A very small percentage are actually able to make a career out of it, particularly at the level you’re now doing it with this extremely hot book. How did you go from that point of being the kid who’s agog over Storm to the person who’s sitting here now with one of the top-selling books in the business?

It was kind of a winding road. I always loved comics. I wanted to draw comics. I interned at Marvel in college.

Where’d you go to school?

Boston College. I studied art but I also was into costume design and character design so I ended up going to UCLA for grad school to do that kind of stuff and kind of realized coming back was something I wanted to do. After school I got a job on the first Captain America movie. I worked in the costume department. I was an illustrator for the designer. He would design the costumes and I would draw a picture of them to show to the director and the studio heads. And it was very cool and I liked it a lot but it wasn’t the kind of art that felt rewarding to me. But that did get me into San Diego Comic-Con that year as a professional so I prepared a portfolio. I went and one of the first reviews I had was with the guy who — three years later — hired me to do Cyclops. 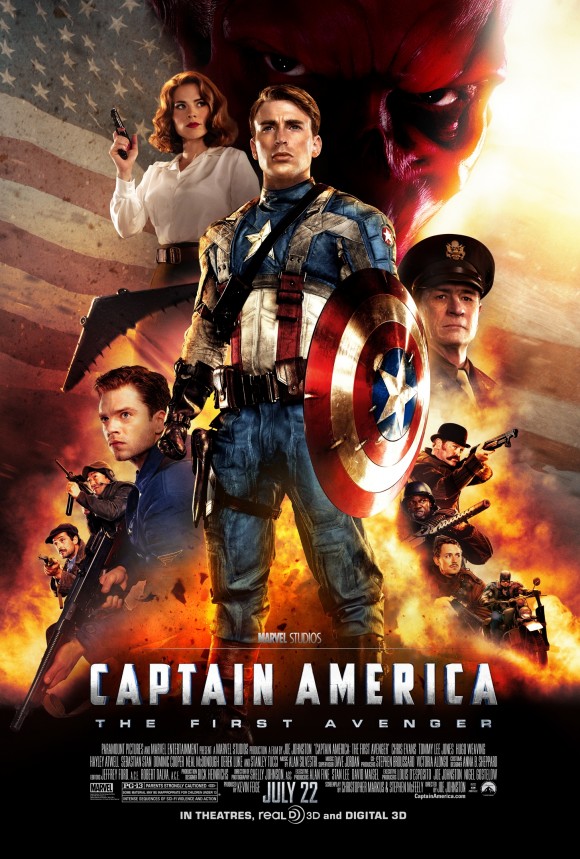 Nick Lowe who does all the Spider-Man stuff. In those three years I did a lot more conventions, a lot more portfolio reviews, trying to improve. I did unpaid comics work, or very low paid, until I got a gig at Boom! Studios, also through meeting people at conventions, and I worked on that book (Supurbia) for two years.

Looking back, I don’t think when I started that my work was ready for where it is now but I think over that time period I tried to incorporate all the feedback I’d been getting and tried to improve. That book ended right before this convention last year. I did a print — an X-Men print — for the show that got some attention online and brought people to my Artist Alley table and from that I got hired to a two-issue stint at DC (Nightwing) and then over at Marvel.

So I got that gig and maybe before that even came out I got hired to do Cyclops. 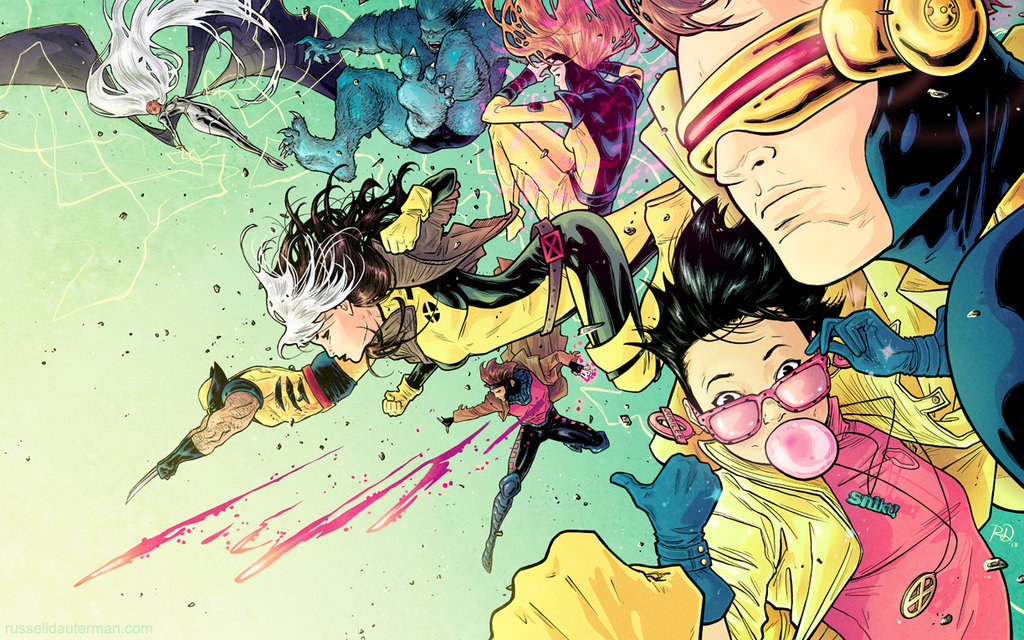 And you went from there to do Thor.

Yeah, they took me off that.

Do you realize that’s pretty much a charmed comic book career? I mean, that’s unheard of. I talk to a lot of writers, a lot of artists … and what you just told me is nothing short of extraordinary, the speed at which you made it this greatly. To be on a Jason Aaron book relaunching with so much press. What’s it like to be in that kind of whirlwind?

It basically started when Cyclops happened. When I got the … basically a fill-in gig at DC, I went, oh this is the next step. I’ll probably do a fill-in thing at Marvel. I was talking to Nick and he said he was going to try to find me something. A fill-in on Wolverine and the X-Men, something like that. So then that book was launched and he said how would you like to launch a book with Greg Rucka? I just stared at my computer for a while.

It’s really hard to process. I wasn’t expecting it at all. So that was huge and blew my mind and then to get taken off that after, you know, people seemed to like it pretty well, and to do Thor. I didn’t expect the big media hoopla. 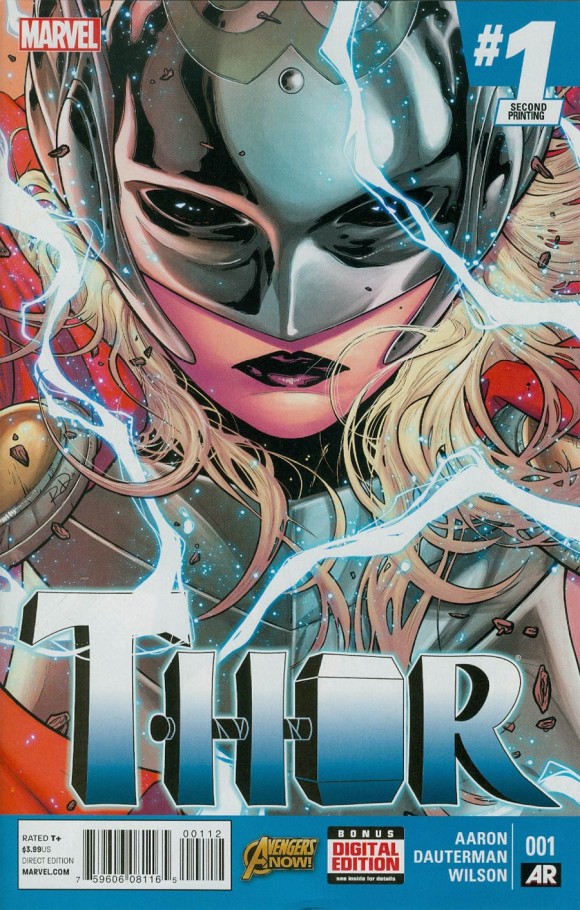 Whenever they change gender or race or sexual orientation in comics, people go out of their minds.

Well, I guess the way I was interpreting it was, OK, dude Thor is still in the book. He’s still a character. You know, you had Beta Ray Bill and you had the frog Thor. OK, this is just gonna be another chapter and I’m very happy that they’re doing this push for diversity in comics. I’m very proud to be on this. I didn’t expect (the reaction). That’s probably naive of me to say, but I didn’t.

It’s funny, especially the instant reaction on the Internet the way it is now. It is true because I looked at it and I thought, ‘OK, well that’s interesting. This will not be forever. This will be permanent — for now. This will be part of the story, part of the tapestry of what Thor will continue to be for another 50 years or whatever it is.’ And I never understood why people go out of their minds when this kind of thing happens. You know that it may not be exactly the same … but it will be the same again. …

When I was a kid, it was Chris Bachalo. Generation X happened. I got in there at #1 and that comic was everything. I just idolized him. I still do. I think he’s incredible. And I think that my earlier stuff like the Boom! work might show a little more of that. Frank Quitely is a huge influence for sure and I think that’s more a touchstone now. Olivier Coipel, Adrian Aphona in new work is someone I really love … but I think Quitely and Bachalo for sure are big influences in terms of how they handle page layout. 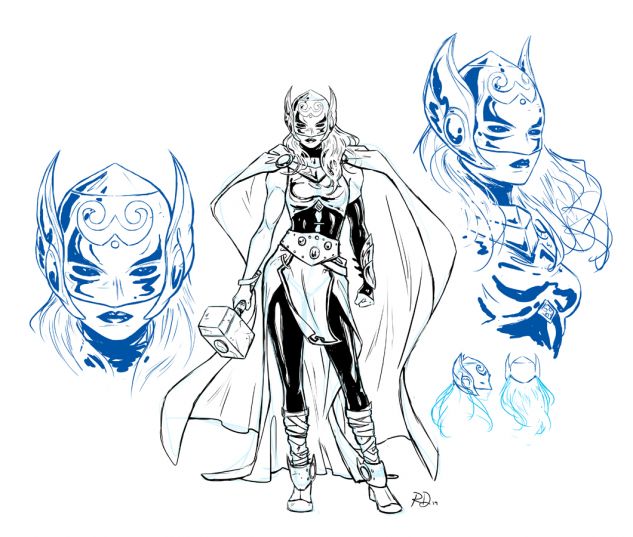 I met Frank Quitely very, very briefly at WonderCon years ago. He was doing a signing and I’d just had a portfolio review at Marvel and I met C.B. Cebulski, the talent scout, for the first time and he was very positive about my stuff so I was feeling pretty good.

My husband was saving me a spot in line to talk to Frank Quitely so I ran over there, stood at the front of the line. So I said hi. I was super nervous. I just said, “I love your work so much and you’re a huge reason why I draw comics.” And he looked up and in his great accent, he said ‘Aw, thanks! I appreciate it!’ (Both laugh) That was it. But it was cool.

Is your husband in the business?

No, he’s an engineer. He’s on the nerd spectrum but not really comics nerddom.

Now you said you went to Los Angeles but you went to Boston College. Where are you from originally?

Cleveland, Ohio. Mr. Cards & Comics was my store growing up!

Cleveland, the city itself?

So as far as your influences, going back even further, you mentioned your first comic. What is the most sentimental item — comics related — that you own?

Sentimental. Hm… I don’t know if it’s the most sentimental but my favorite comic that I own is the one that I had Frank Quitely sign that day. It was, I think, New X-Men #121. It’s the silent issue. I think one dialogue balloon in the whole thing. That’s really special. That’s my favorite comic book of all time.

In terms of nostalgic, it’s gotta be Generation X #1 that I got. It had the chromium foil cover. (Dan laughs) I still have all those. 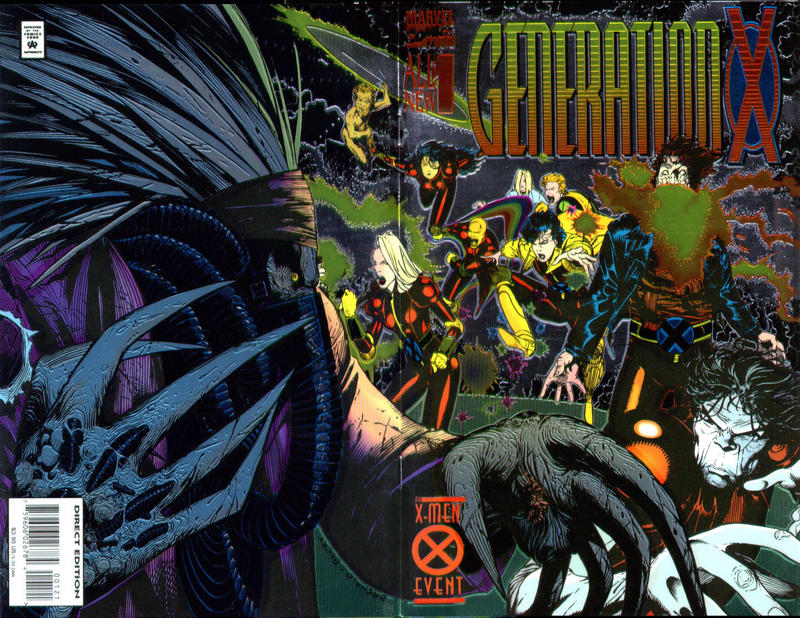 Then turning it in the other direction, if you got to pitch what you would consider your ultimate gig, whether it’s writers or characters, what is it that you would want to do: ‘This is what I would KILL for.’ Aside from what you’re doing now which is pretty great stuff.

Yeah, I should say, and very honestly mean it, I’m very happy with the book I’m on right now. I love fantasy and I love a strong female character, so that’s a very good fit, I think.

But in terms of the future, I’d love to do an X-Men book with kind of the X-Men I grew up with. You’ve got Storm and Rogue and Beast and Gambit, that kind of core team. I’d love to do a team book like that.

Well, at the rate you’re going, you’re probably gonna get that chance.