The SUPERMAN Comics Unseen for More Than 60 Years

ADVANCE REVIEW: Jerry Siegel was born 100 years ago today — and here’s a look at some of his final original work on the Man of Steel.

IDW and The Library of American Comics have produced another volume of DC‘s newspaper strips, and this one’s a Superdoozy: 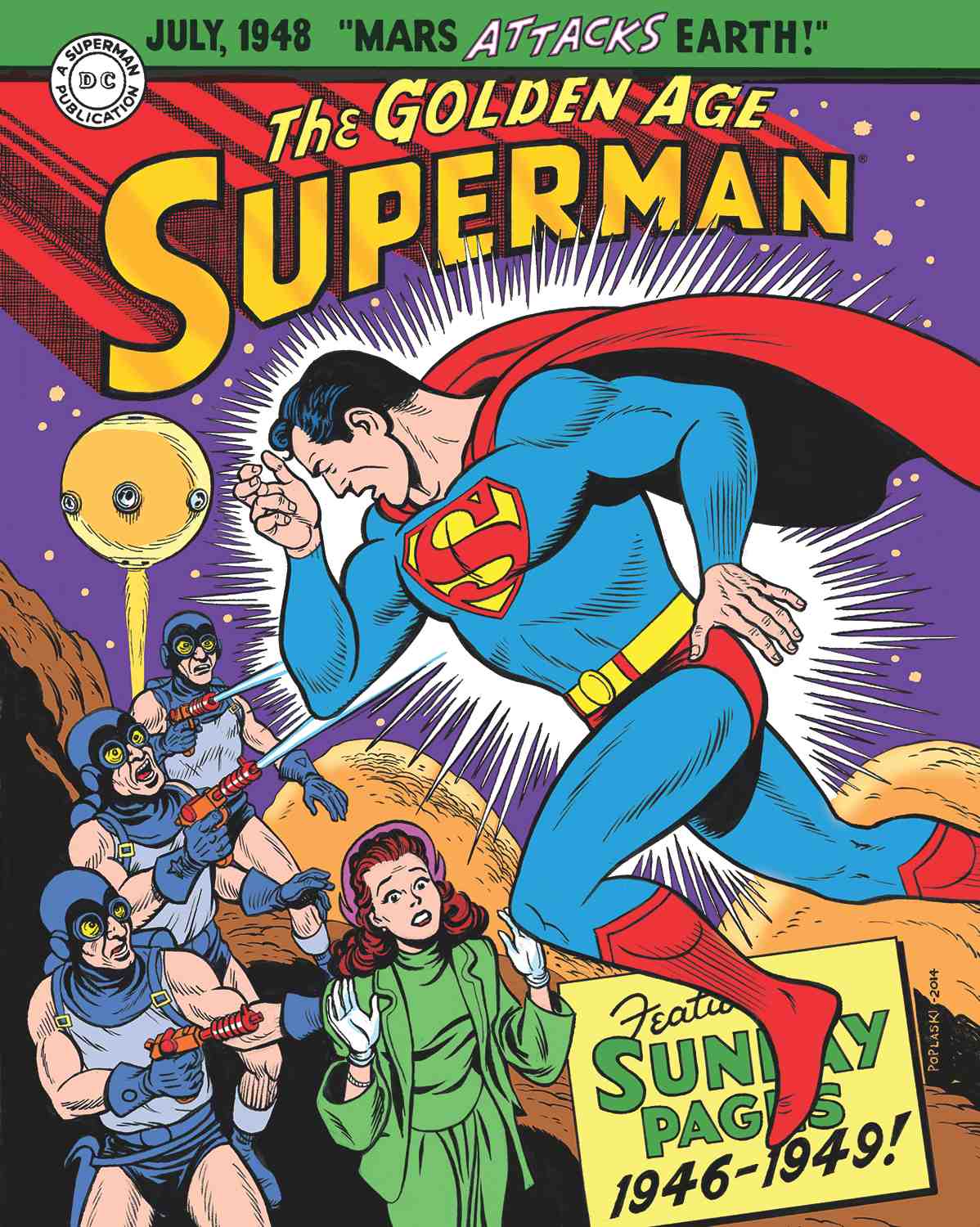 The Golden Age Superman: Sunday Pages 1946-1949 is a gorgeous hardcover that is notable for a number of reasons:

— The strips represent some of Jerry Siegel and Joe Schuster‘s final Golden Age work on their creation.

— It features stunning art by Wayne Boring, who came to define the Man of Tomorrow in the era that bridged the Golden and Silver Ages.

— It includes strips that have never been reprinted. 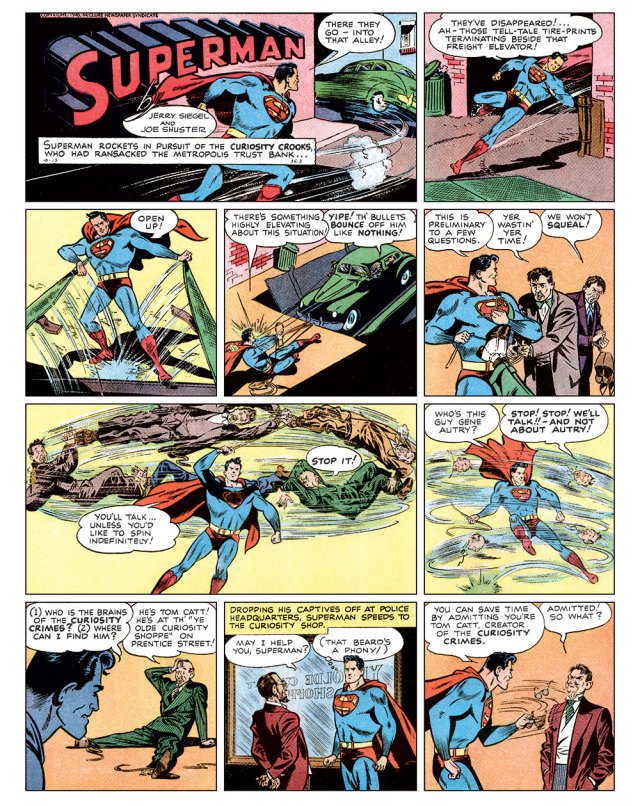 Best part? The stories are a gas! Tired of ultraserious Superman? Tired of a Man of Steel who’d snap his adversary’s neck?

In 18 often bizarre and hilarious tales, Supes encounters a dinosaur called a Paleomatzoball; gets turned into a toddler; meets Cleopatra; and plays buddy by helping to build a poor schnook’s house. 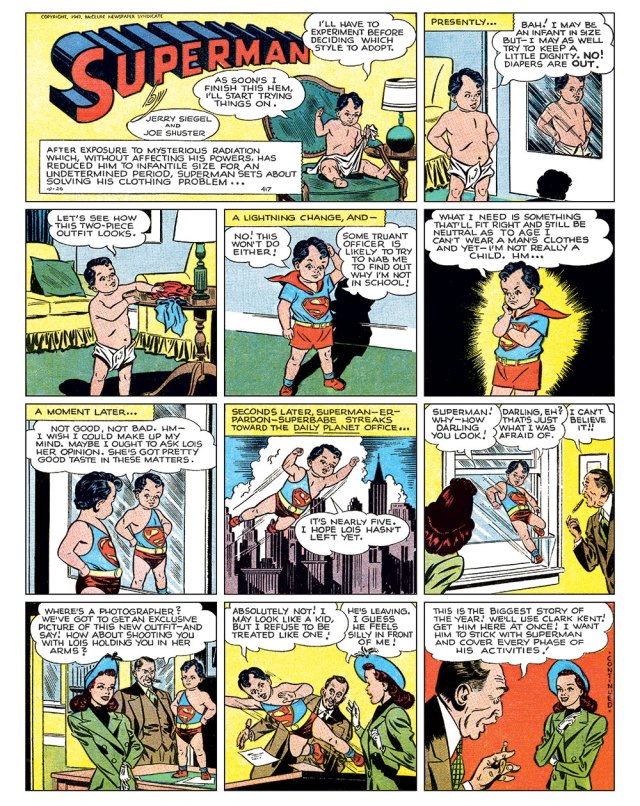 The last arc to feature Siegel and Schuster’s names in the Sunday Pages.

This is the Superman who has his Supertongue in his Supercheek and who clearly enjoys doing Super things, even if they’re trivial annoyances.

The book was edited & designed by Dean Mullaney, with a cover by mainstay Pete Poplaski. And one the best parts is the introduction by Mark Waid, a Superscholar who places these Sunday strips in their historical context.

One of the things Waid points out is that about midway through the book, Siegel and Schuster’s names are dropped from the strip because they’d sued the company. Of course that started decades of legal wrangling that helped define the issue of creator rights. 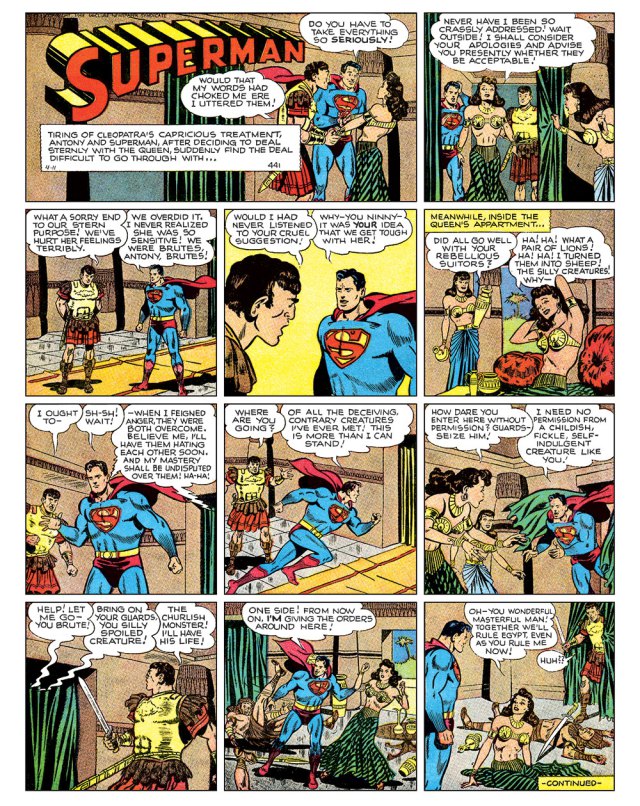 Notice the names are gone.

The oversized hardcover (listed at $49.99 and due out in early November) is the second in IDW’s Superman Sundays series (not to mention their Silver Age Dailies volumes) and, according to the publisher, collects nearly 170 sequential Sunday pages that have never been reprinted.

And as cool as all that is, what’s even better is that they’re just so damn fun.