Part 2 of our look at the Swingin’ ’60s crossover!

In Part 1 of our little Batstravaganza celebrating the BATBOOK OF THE WEEK kitschy team-up of Batman ’66 and Brit TV’s The Avengers, we talked to writer Ian Edginton (click here) about his dream gig — and what readers can look forward to. (Hint: MEOW). Now, it’s artist Matthew Dow Smith… 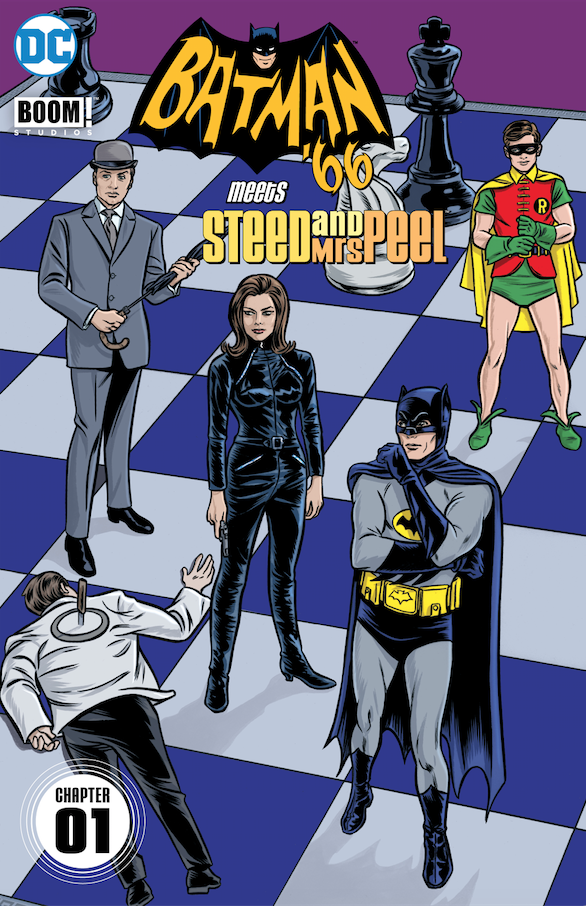 Matthew Dow Smith: When I first heard DC was doing the project, I reached out to the DC Digital editorial team. A few months later, I was offered the gig. I was so excited that I actually punched the air. There’s even a photo of it that I sent to the editor.

Dan: What was your introduction to the Batman ’66 show?

Matthew: I grew up in the ’70s and ’80s, when reruns of the Batman show were a mainstay of local TV stations. No idea what the first episode I ever saw was, but I loved the show and watched it whenever I could. Like a lot of kids, I didn’t see the campy side or get the jokes seeded in the episodes for the adults, I just saw it as awesome superhero stories on my TV every afternoon. I even had the Mego Batman figure. I used to play with him and my Mego Star Trek figures on this little Enterprise playset that I got one Christmas. Not sure what Batman was doing in 23rd Century outer space, but they were often under attack from my sister’s oversized Darth Vader figure. 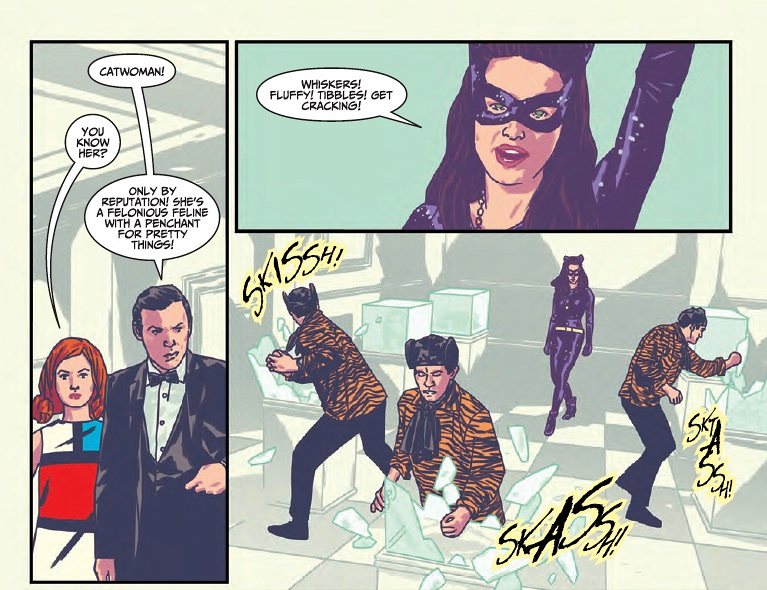 Dan: So, what’s your favorite episode?

Matthew: Gotta say, I will always have a soft spot for Enter Batgirl, Exit Penguin, though I prefer the two-part episodes of the earlier seasons with those fantastic cliffhangers. And pretty much any episode with the Joker was a winner in my book. Cesar Romero was just so crazy and over the top, you can’t take your eyes off of him whenever he’s onscreen.

Dan: Same with “The Avengers” TV show. How’d you get hooked in?

Matthew: My other obsession as a kid — and let’s be honest, it’s still my obsession as an adult — was Doctor Who, and whenever I read the fan magazines, they were always talking about this show The Avengers. Back then, there was no way for me to see it. We didn’t have DVDs of the show or websites you could watch it on, I just kept having to listen to people talk about how great it was. Years later, when I bought my first DVD player in the late ’90s, I saw a boxed set of one of the Emma Peel seasons on DVD and snatched it up. It was actually the very first DVD I bought. Watched every episode on those discs as soon as I got home and totally understood why everyone loved it so much. Now I have them all on DVD and even have the audio plays they did of the lost episodes.

Dan: And what’s your favorite episode?

Matthew: That’s a tough one. Even tougher than a favorite Batman episode. I guess I’d have to say The Winged Avenger because it takes a couple of playful swipes at the Batman ’66 show or Return of the Cybernauts because…well, c’mon…it’s got Peter Cushing in it. And Cybernauts! 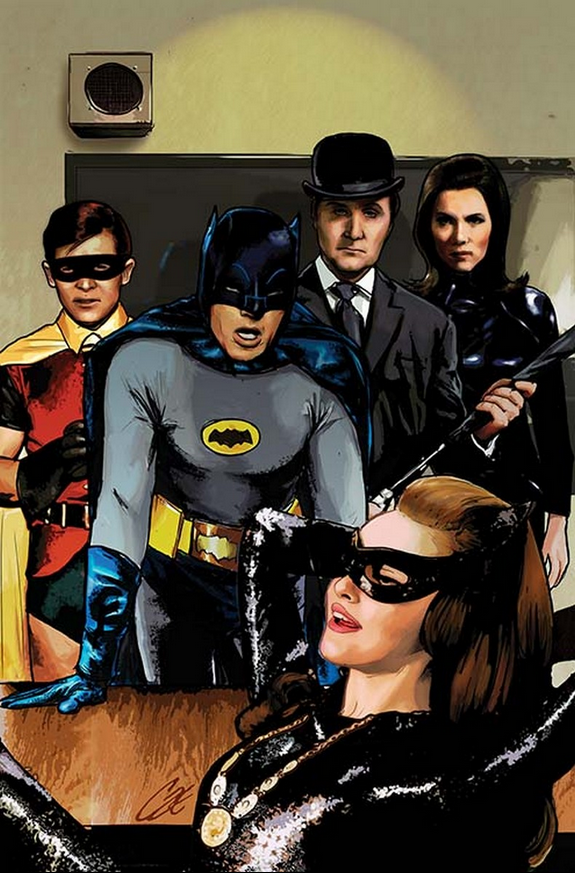 Dan: As an artist, you have very recognizable characters and places to work with here but there’s a lot of room to be trippy and cool and offbeat on your own. I’m not really sure where I’m going with this but tell us about creating this world on the page.

Matthew: One of the things I love about both shows is that they’re both very theatrical, visually. The sets look like sets, not actual real places, so I’m trying to play into that a bit with the help of Jordie Bellaire on colors. She’s adding a wonderful pop-art layer beneath my line work that I think really brings all of this alive. And I love trying to recreate the look of familiar locations like the Batcave and Commissioner Gordon’s office, though they were a lot easier to draw when I was a kid and didn’t have to worry about the perspective making any sort of sense.

Matthew: Well, I think I’m going to surprise you a bit here and say The Prisoner. Best ’60s theme song ever. Though of these two I gotta go with The Avengers, even though I automatically play the Batman theme whenever I pick up a bass. It’s a lot of fun to play.

Dan: We’ve been running our own list of whom Batman ’66 should team up with next. (click here.) What would be your choice?

Matthew: I would love, love, love to see a Batman ’66/Prisoner crossover where Number 6 wakes up in Gotham and it’s all another attempt to trick him into revealing why he resigned. Though based on my childhood games, I’d clearly be down with a Batman/Star Trek crossover, provided a giant Darth Vader can make a cameo appearance. 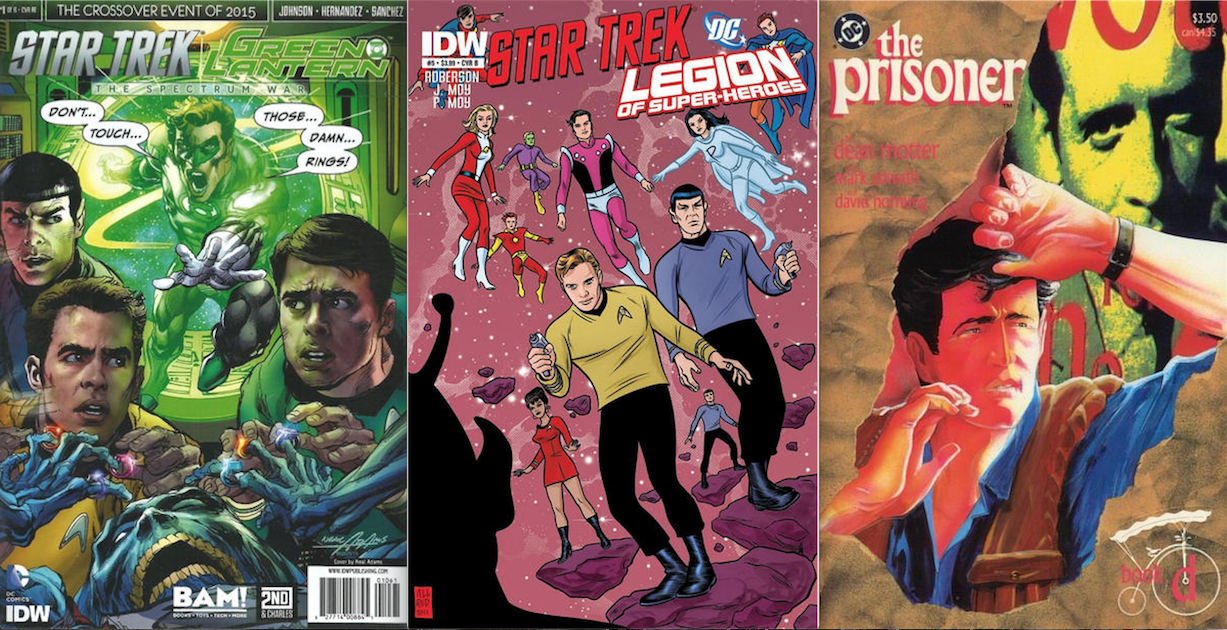 Anything can happen, I’d say…

The series will run in 10-page chapters digitally over the next several months. As chapters accumulate, it’ll be published in a 6-issue print miniseries (with inevitable trade collections to follow). The first chapter will be available for download 6/8 via the DC Comics App, Readdcentertainment.com, iBooks, comiXology.com, Google Play, Kindle Store, Nook Store and iVerse ComicsPlus.