THE PENGUIN AND BEYOND: 13 Great BURGESS MEREDITH Performances

A BIRTHDAY SALUTE: The late, great character actor was born 115 years ago…

Some years back, 13th Dimension Editor Dan Greenfield did a great column for Burgess Meredith’s birthday (born November 16, 1907) in which he celebrated Meredith’s wonderful performance as the Penguin on the Batman TV series.

As I am a great admirer of the actor, I’d like to examine the rest of his incredible career. So, here are 13 highlights, in chronological order:

Winterset (1936, RKO). Meredith had a lengthy career on Broadway, both as an actor and as a director, through 1974, including receiving a special Tony Award for directing A Thurber Carnival. He first appeared on the Great White Way in 1930 as a servant in Romeo and Juliet but by 1935 he was playing the lead role in Winterset, a play by Maxwell Anderson. In the film adaptation in 1936, he repeated his Broadway role as the son of an innocent man executed by the state, seeking to clear his father’s name. 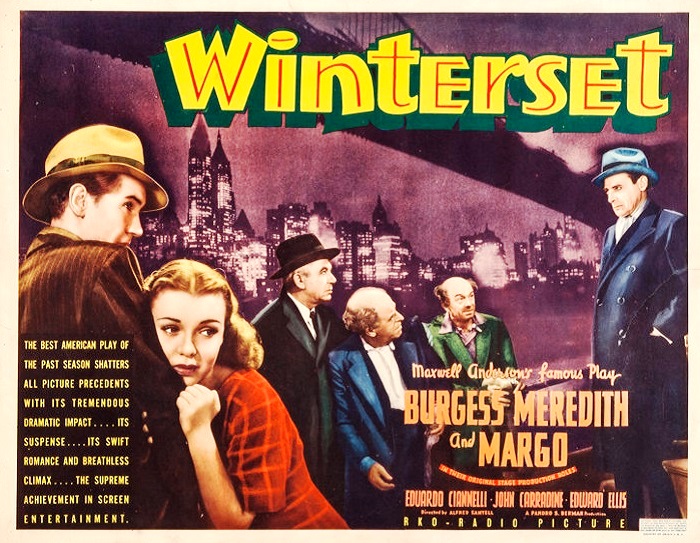 Of Mice and Men (1939, 20th Century Fox). Lon Chaney,m Jr., in what is probably the best performance of his career, was the intellectually disabled Lennie (“We gonna live off the fat of the land, and have rabbits”). Guiding him from town to town, job to job, was his friend George, played with equal parts sensitivity and frustration by Meredith. Adapted from the John Steinbeck novel, this film was one of the highlights of 1939 and was nominated for five Academy Awards, including Best Picture. Unfortunately, it was in the same year as Gone with the Wind. 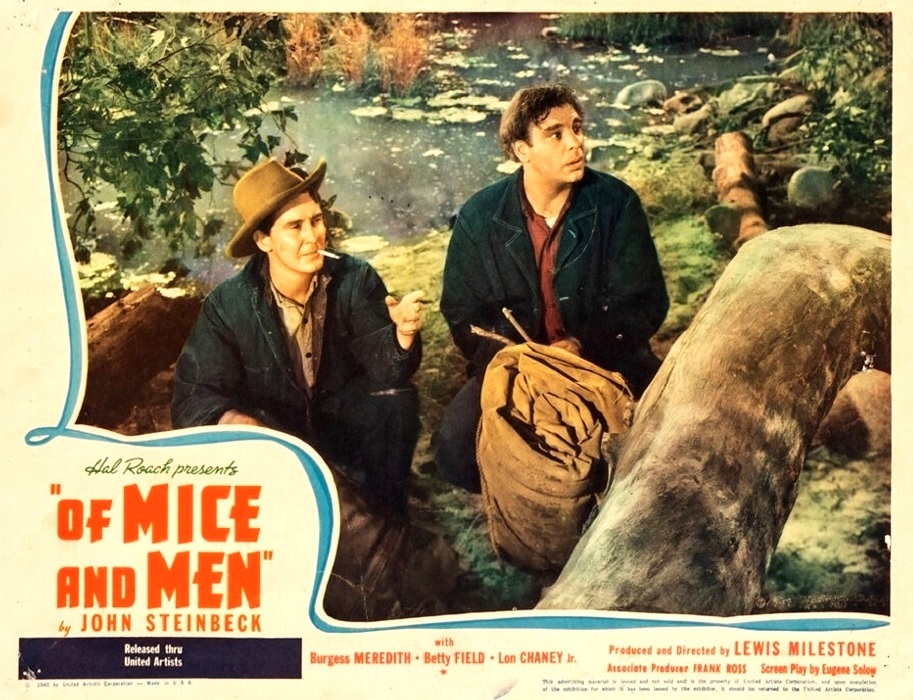 Candida (1942, Shubert Theatre, NYC, not on film). Katharine Cornell, who was one of Broadway’s greatest actresses, produced and starred in a very special revival of George Bernard Shaw’s play at the Shubert Theatre in 1942. The actors, crew, Shaw, and the Shubert organization agreed to have all proceeds from the performances go to the Army Emergency Fund and the Navy Relief Society. Included in the cast were Raymond Massey, Mildred Natwick, and Private Burgess Meredith, who had enlisted in the United States Army Air Corps in February 1942. He had acted in two previous Broadway plays with Cornell at the start of his career and became very good friends with her. 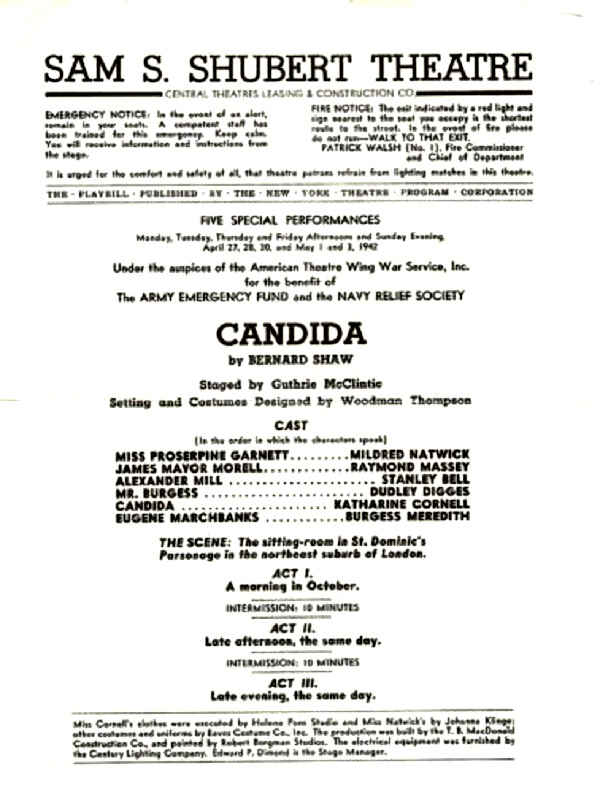 1942 Candida Playbill cast list with the special announcement at the top that the performances would benefit the Armed Forces.

The Story of G. I. Joe (1945, United Artists). Meredith had risen to the position of captain when he was honorably discharged in order to make this movie, starring as real-life war correspondent Ernie Pyle. Meredith was Pyle’s own choice to play him. Regrettably, two months before the film’s release, Pyle was killed in action in Japan. 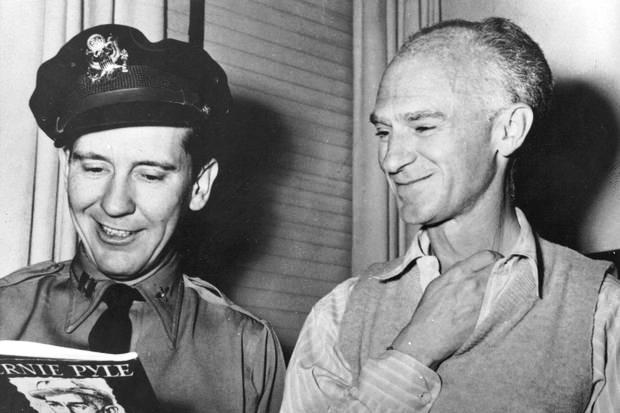 The Twilight Zone – “Time Enough at Last” (aired November 20, 1959, CBS). While The Twilight Zone had many great shows, there are probably only a handful when you mention the episode title where the ending stands out so clearly in the memory. “Time Enough for Last” was one of those. I will not spoil that ending but the story is about a man who wants nothing more than to have time to read books… and it may have the greatest ironic twist of all the TZ episodes. 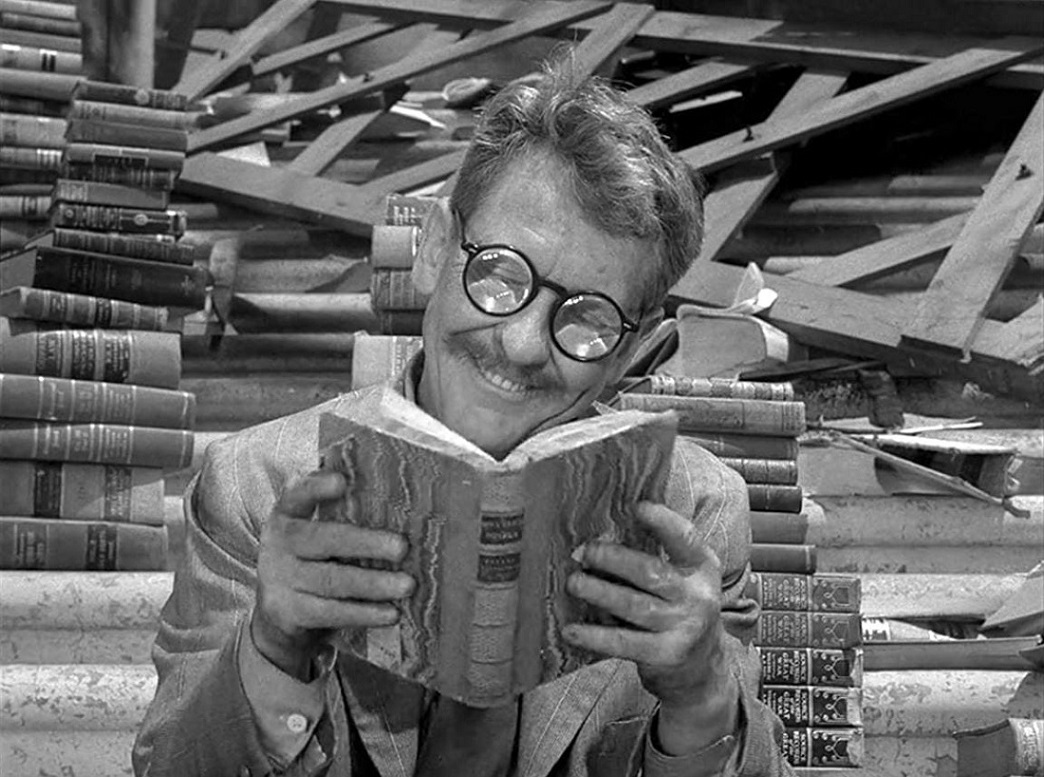 Twilight Zone – “The Obsolete Man” (aired June 2, 1961, CBS). Meredith turned in a riveting performance as a librarian and religious man in a story set in the future when the government has banned books and religion, and the state has decided he is obsolete and must be executed. The Twilight Zone – “Printer’s Devil” (aired February 29, 1963, CBS). Meredith does a fine turn as the Devil, pure leering evil and malicious intent as he tricks a small town newspaper publisher into signing his soul away in return for major success. (There was one other episode of TZ that Meredith starred in, “Mr. Dingle the Strong,” but it was a silly story about two Martians giving super-strength to a meek little man, played by Meredith.) 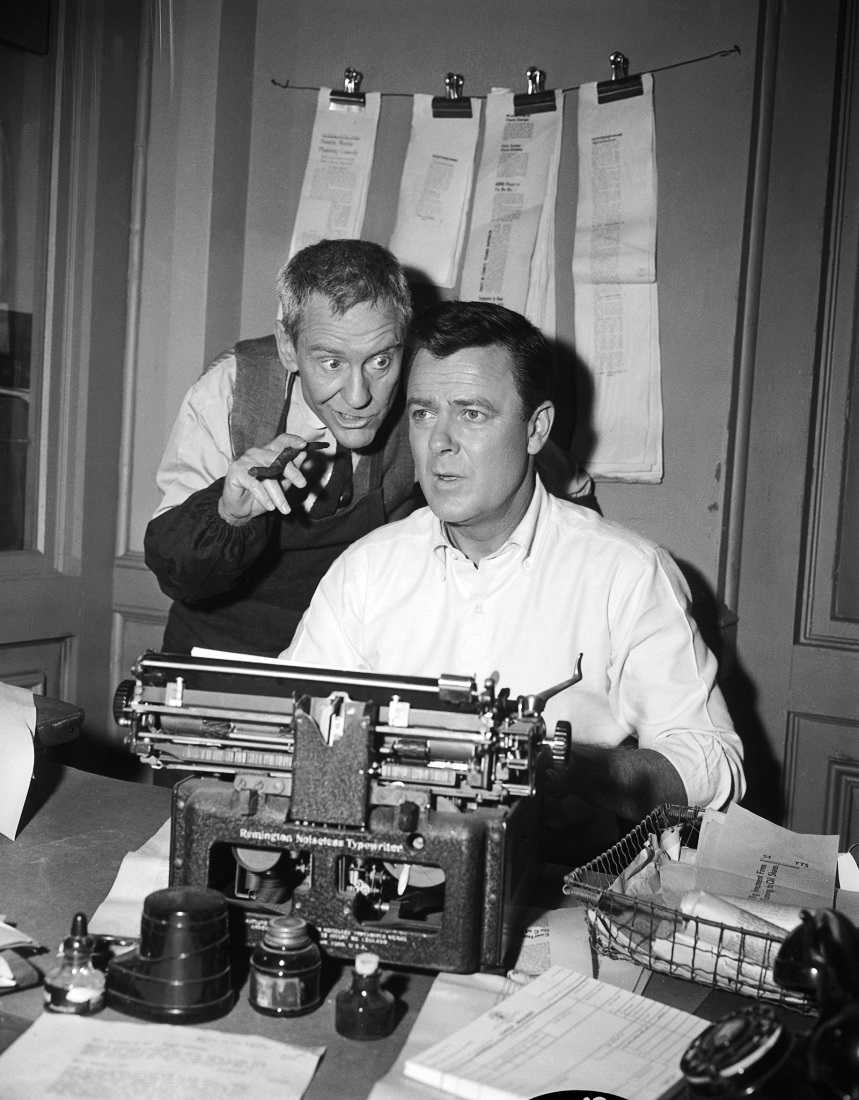 Batman (TV series and movie, 1966-1968, 20th Century Fox). OK, I know I said at the top I would cover other areas of his career but, come on, how would it be possible to discuss the best parts without acknowledging the Penguin? 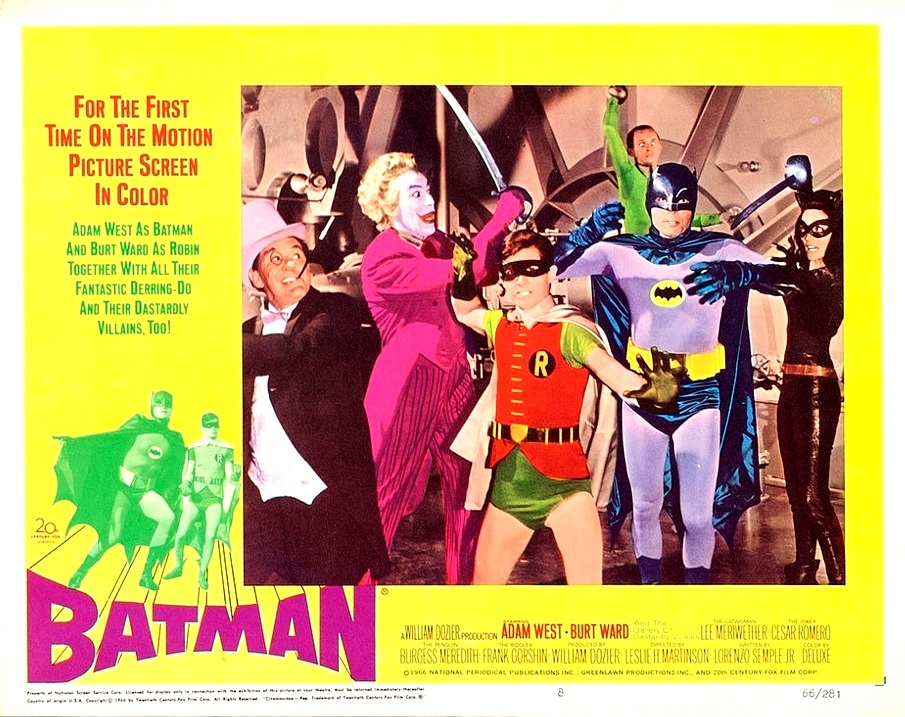 Watching Meredith makes you believe he was having more fun with the role than any other actor as a guest villain. In addition to the series, Meredith played the Penguin in the delightful 1966 movie, along with Cesar Romero and Frank Gorshin repeating their roles as the Joker and the Riddler, respectively, and Lee Meriwether taking over from Julie Newmar as Catwoman.

Meredith also had a hilarious turn as the fake Commodore Schmidlapp, a poor disguise the Penguin used to try to trick the Dynamic Duo. 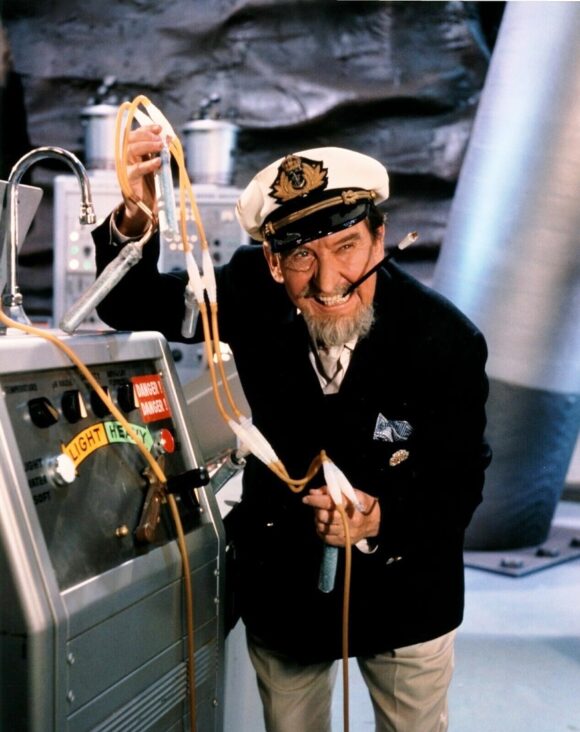 Meredith as “Schmidlapp” inside the Batcave

The Day of the Locust (1975, Paramount). His first nomination for a Best Supporting Oscar came for his superb performance as an elderly ex-vaudevillian turned door-to-door salesman of “miracle drugs” in this story of Hollywood in the 1930s. (George Burns ended up winning for The Sunshine Boys.) 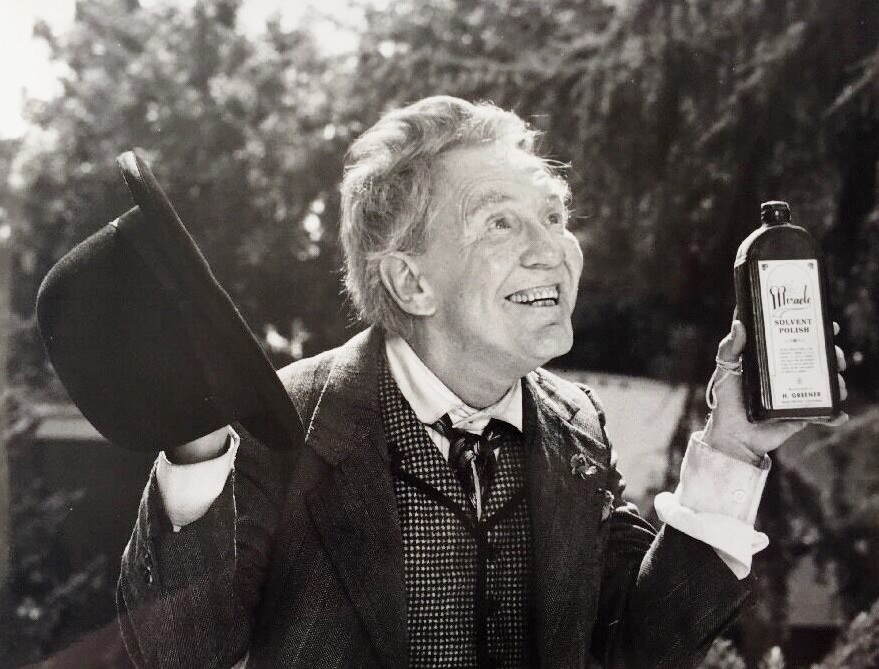 Rocky (1976, United Artists). He was also nominated for the Best Supporting Oscar for Rocky, but lost to Jason Robards in “All the President’s Men.” However, his time as Rocky Balboa’s fight manager, Mickey, was completely mesmerizing. He also appeared in three Rocky sequels. Tail Gunner Joe (1977, Universal). In real life, Burgess Meredith was blacklisted in the TV and film industry for a number of years during the Communist witchhunt by the House Un-American Activities Committee. So, it was only justice that Meredith got to play attorney Joseph Welch in this made-for-television movie. Welch had been instrumental in bringing down the power-hungry senator, Joseph McCarthy, by saying to him during the televised coverage of the Army-McCarthy hearings, “Have you no sense of decency, sir? At long last, have you left no sense of decency?” Meredith won the Emmy Award for Outstanding Performance by a Supporting Actor in a Comedy or Drama Special. 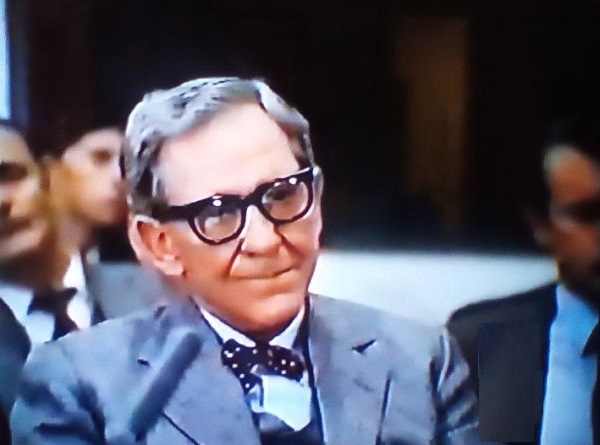 Clash of the Titans (1981, MGM/United Artists). In this famous Ray Harryhausen special-effects feature, Meredith played Ammon, the poet-playwright who aids Perseus (Harry Hamlin) in his quest. Meredith won his second Saturn Award for Best Supporting Actor for this (his first was for Magic). 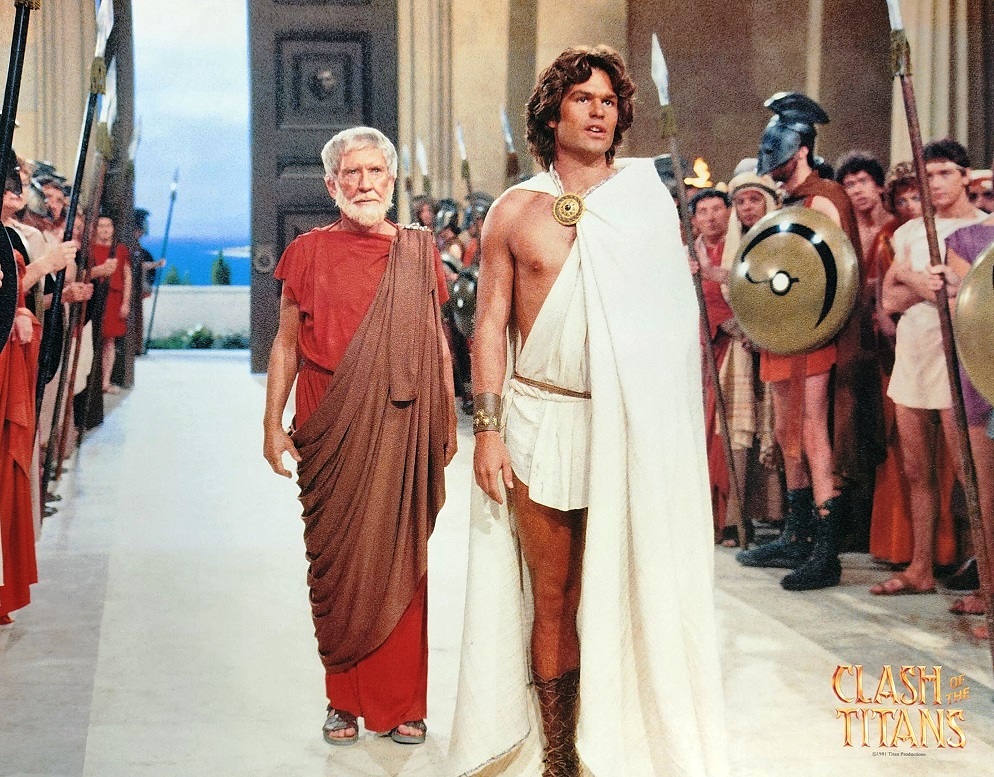 Kenny G.: Have Yourself a Merry Little Christmas (1994). To finish this short retrospective of Meredith’s life, here is a lovely music video in which there is a collection of famous Christmas movie clips. Burgess Meredith plays the theater projectionist…and, be aware, by the end you may be in tears (happy tears).

After nearly 70 years of acting, Burgess Meredith died in his home in Malibu, California, at the age of 89, on September 9, 1997.