The Oddball World of 1949’s BATMAN AND ROBIN

Did you know there was a film titled Batman and Robin that doesn’t make the average Bat-Fan want to throw themselves in front of the nearest train? It’s true! It’s a 1949 movie serial starring the Darknight Detective and the Boy Wonder squaring off against the mysterious hooded bad guy known as the Wizard! 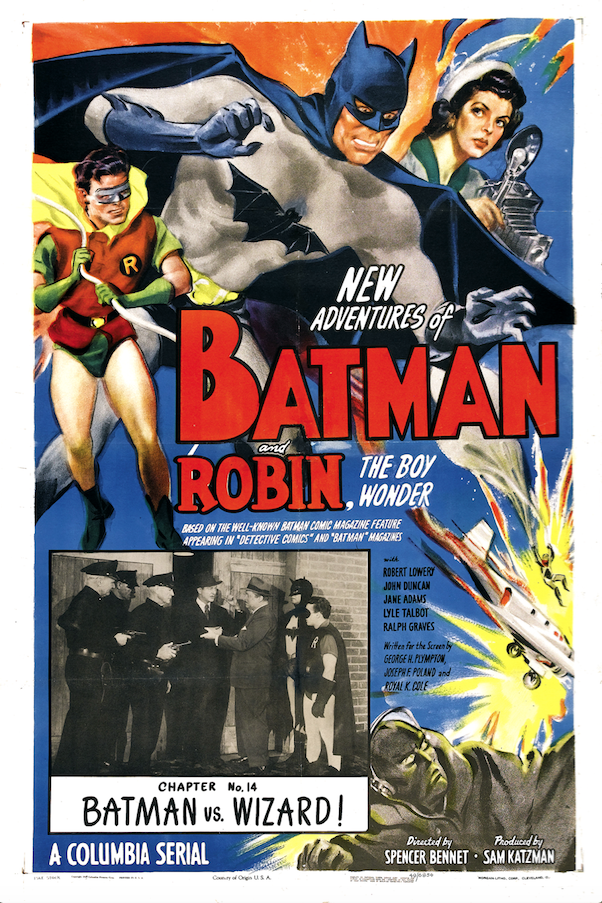 I have a giant, stretched-canvas framed version of this very poster hanging in 13th Dimension’s secret lair. — Dan

The Wizard is uncredited until the final chapter, since part of the “cliffhanger” aspect to this story is the Dynamic Duo trying to figure out who he really is. The initial suspect seems to be the uber-crotchety Professor Hammil (William Fawcett), who has invented a device that allows the user to remote control any vehicle in Gotham City. Not too long after confronting Hammil for the first time, the wheelchair-bound inventor calls our heroes “A pack of careless idiots.” See? Crotchety!

The Wizard steals the device, and starts using it in ever-larger doses to show Batman and the GCPD that he means business. The machine runs on diamonds, so that means he has to steal a lot of them to keep it running. He spends a lot — a lot — of time in his secret cave base flipping switches and turning dials, while letting his fedora-d henchmen do the heavy lifting. 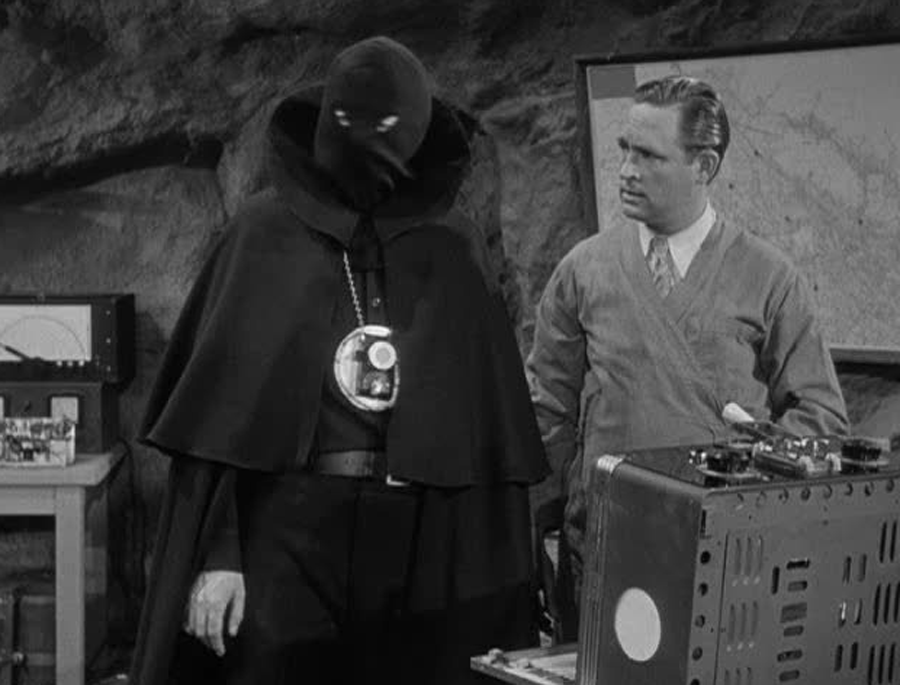 As you can see from the first chapter, where poor Bats has to tilt his head up so he can see through the eye-slits of his dime-store cowl, Batman and Robin is a cheap, cheap affair. Brought to you by the same team that would work on Atom Man vs. Superman, director Spencer Bennet and producer Sam “Eh, Good Enough” Katzman, this 15-chapter adventure has our heroes fighting almost exclusively during the day, which does Batman no favors. Most of the time, he and Robin just look completely ridiculous as they stand around regular citizens, and everyone pretends this is a totally normal set of affairs. 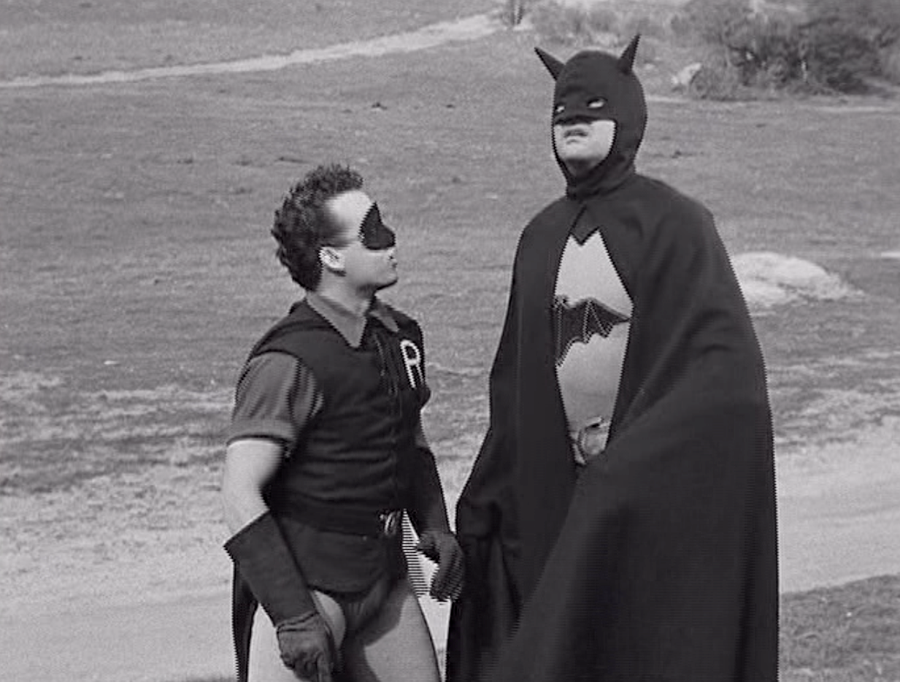 Considering how rich Bruce Wayne is, he really skimps on the details: There is no Batmobile; instead Batman and Robin drive around in a regular ol’ 1949 Mercury (which is parked right outside Wayne Manor). Batman keeps his costume in a filing cabinet. He has no utility belt, etc. etc. Considering how much more difficult Superman must have been to transform to live action, it’s surprising that his two serials seem more impressive on the superheroic SFX scale. Poor Batman doesn’t even get one scene of him skulking around in the shadows — I guess even night photography was beyond this serial’s budget (somehow the Batsignal works when it’s a bright, clear 78 degrees in the shade).

But there is some fun stuff to be found here! Right off the, er, bat, Batman gets in a fight on top of a moving train, and you can see at least some of it was actually shot for real. When mixed with the process shots, it makes for a pretty exciting action scene, and gives you exactly what you came for: Batman kicking butt. There’s a fun scene where Batman dons a disguise and goes undercover in the Wizard’s gang, a nifty piece of actual detective work that virtually none of the later cinematic Batmen have engaged in. 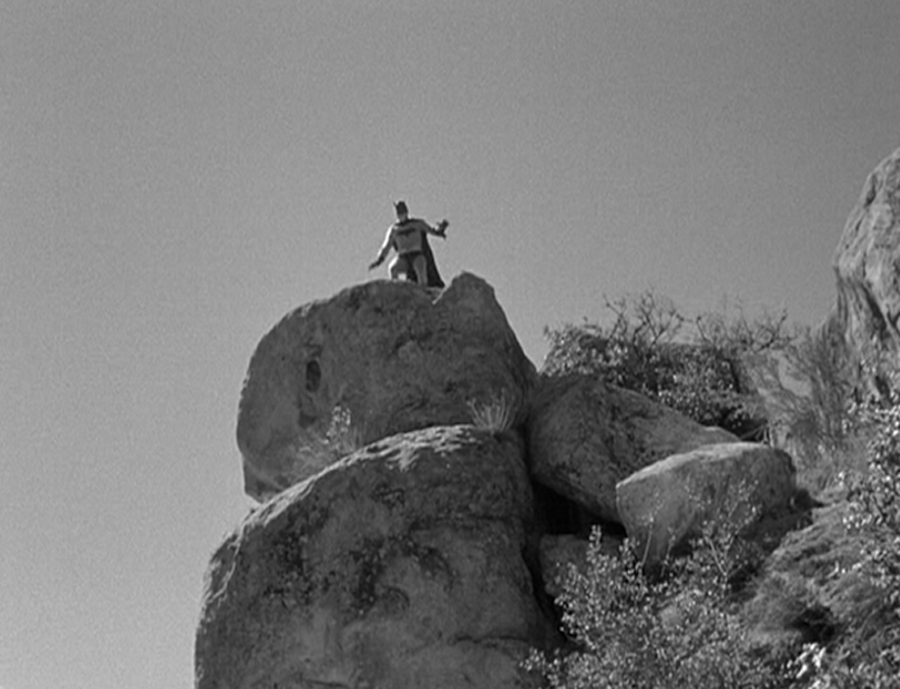 But those exciting moments are stretched pretty thin: There’s a whole sub-plot about a radio-show host named Barry Brown, who seems to be in cahoots with the Wizard. He gets a lot of time where he just explains what’s going on, and conveniently it seems that everyone in Gotham listens to his show: Mere seconds after a broadcast, all the characters are marveling at what they just heard.

There are some moments where you wonder if anyone behind the camera was paying attention—the aforementioned Professor Hammil is confined to a wheelchair, and so is ruled out as being the Wizard. Yet in Chapter 14, Hammil is up walking around, right in front of Batman and Robin, and no one says a word! In an earlier segment, Batman mentions going through his “rogues gallery” to look for suspects, yet all he does is shuffle some papers — would it have killed the producers to snap a few photos of actors made up to look like the Joker, the Penguin, Two-Face, et al? I guess so.

Acting-wise, I enjoyed Jane Adams as Vicki Vale, who is a giant smart-ass to both Bruce Wayne and Batman: When she produces a photo of who she believes is the Wizard, she follows it with: “It’s Carter.” Batman replies, “He’s dead.” Vicki’s retort? “Well, it’s still Carter.” Considering that one of Adams’ previous co-stars was the non-actor Rondo Hatton (in 1946’s The Brute Man), she probably considered trading lines with Batman a step up. 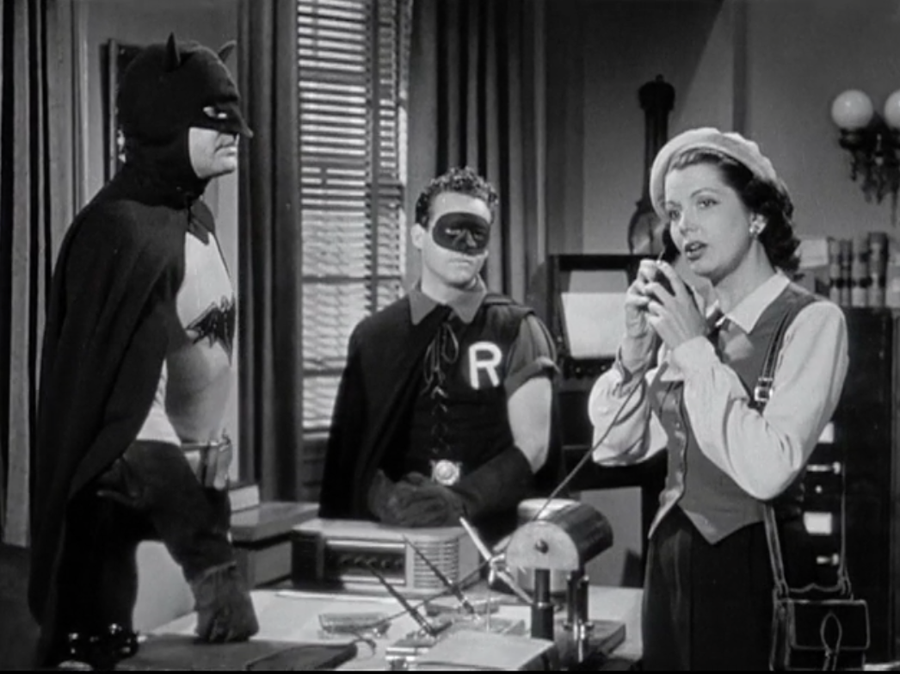 Unfortunately for the character, Batman is constantly putting her down: At one point he describes Vicki’s job as a reporter thusly: “She’s always going around taking pictures no one ever sees.” Lyle Talbot is OK as Commissioner Gordon — I enjoyed him a lot more as Lex Luthor in Atom Man vs. Superman, produced the next year. (Speaking of, the Wizard’s cave hideout looks suspiciously like Luthor’s — maybe the ever cost-conscious Lex leased it from the Wizard once it became available).

Lowery and Duncan are fine, if not all that memorable, in their dual roles as Bruce/Batman and Dick/Robin. Unlike Kirk Alyn in his role as Superman, both actors get credited right there on screen (I guess they weren’t worried about ruining kids’ delicate sensibilities when it came to the Dynamic Duo). As I mentioned before, their costumes do them no favors, with saggy midsections and capes that flop around and look like they just get in the way. Even when Bruce and Dick are alone, they refer to their dual identities as if they are separate people, which is weird. 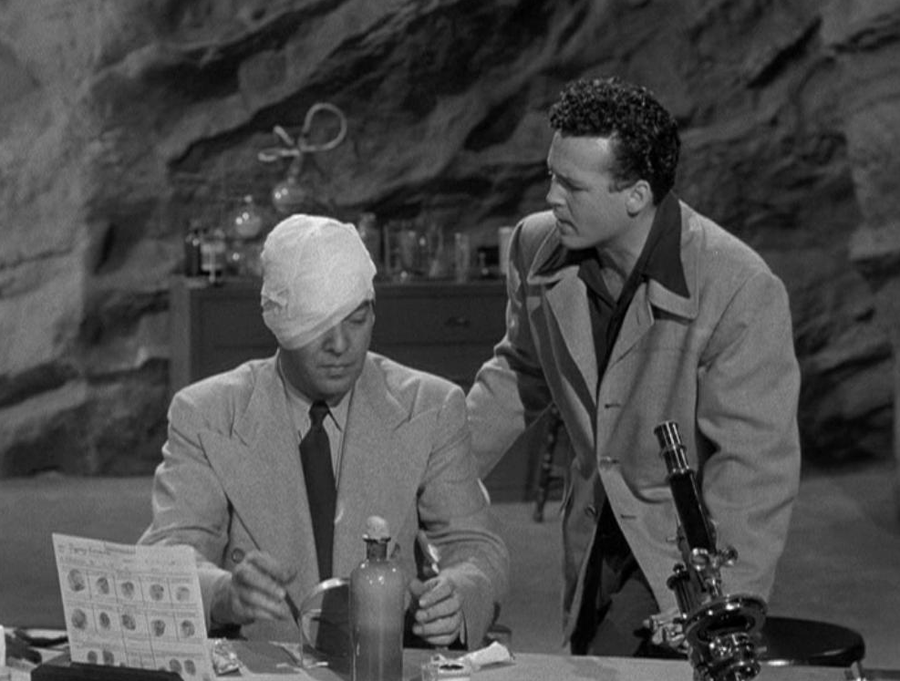 In the intervening decades, this and the earlier Batman movie serial have fallen out of copyright, which is why you can find them on VHS and DVD from various cheapjack labels. Some of the sleeve art used has tried really hard to convince you Batman and Robin was something resembling what most modern Bat-Fans might reasonably expect, but don’t be fooled, citizens! Last year TCM showed each installment on consecutive Saturday mornings, which is just another reason why I love that channel.

All in all, Batman and Robin is a pretty dire affair, but if you go in with very low expectations, you’ll enjoy at least parts of it. It’s a shame that Columbia never thought to combine Batman and Superman in one movie serial — but of course, we all had to wait a lot longer for that to happen.

Rob Kelly is a writer/artist/comics and film historian. He is the co-host of The Fire and Water Podcast (and the host of its sister show, The Film and Water Podcast), the co-creator and writer of the award-winning webcomic Ace Kilroy, and the creator of the book Hey Kids, Comics!: True-Life Tales From the Spinner Rack. He keeps his Batman costume in a filing cabinet, as well.