The other night I was thumbing through my Batman Limited Collectors’ Editions, just for kicks, when I picked up my copy of 1974’s #C-25. You know, the one with Neal Adams’ famous running Batman set against the cityscape and a bright red sky: 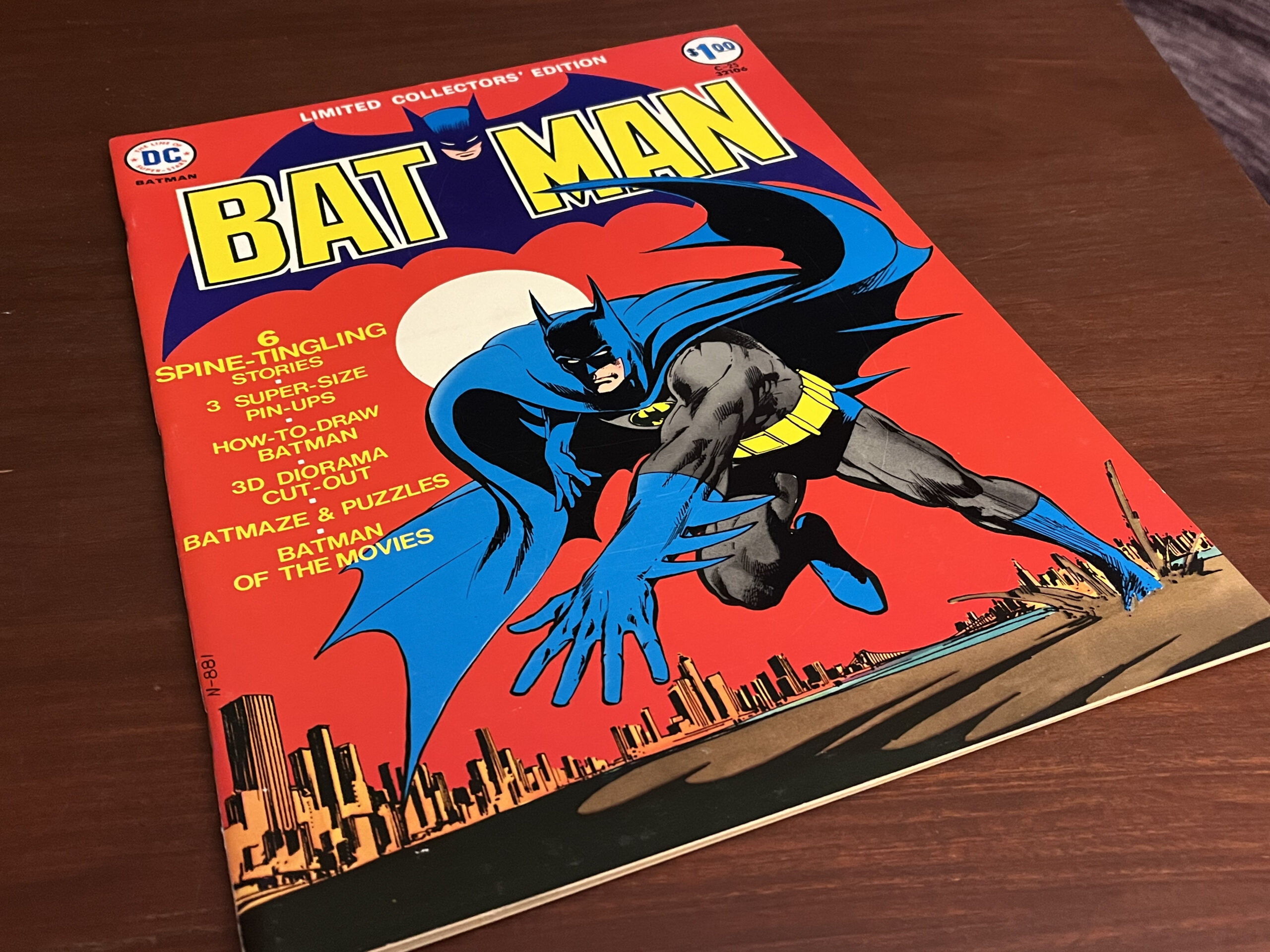 Though it wasn’t played up on the cover, the treasury issue is a celebration of Batman artists past and (at the time) present: illustrators like Jerry Robinson, Carmine Infantino, Irv Novick and Adams, to name several.

Oh, and Dick Sprang, one of the pre-eminent Bat-artists of the Golden Age.

This isn’t the same copy I had when I was a kid; this one I picked up in the last 10-15 years and it’s in beautiful shape. I don’t remember where I picked it up or how much it cost but it’s nice, crisp and bright.

But get this: When I opened it the other night, I noticed something written on the table of contents — Dick Sprang’s signature, right by his story listing: 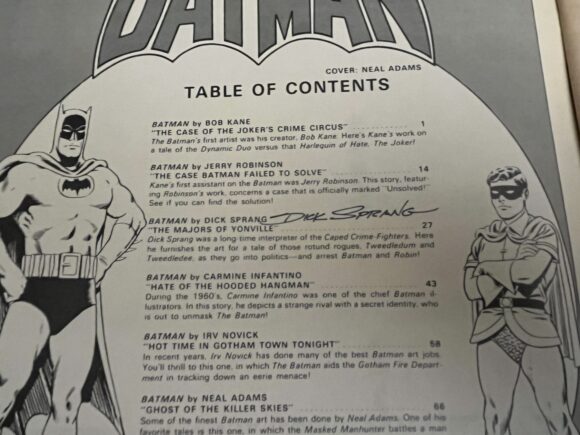 I guess I haven’t read this issue that often because I’d never noticed it before. Then it occurred to me to turn to the story itself to see if anything was hiding there — and sure enough, there’s a second signature at the bottom of the splash page: 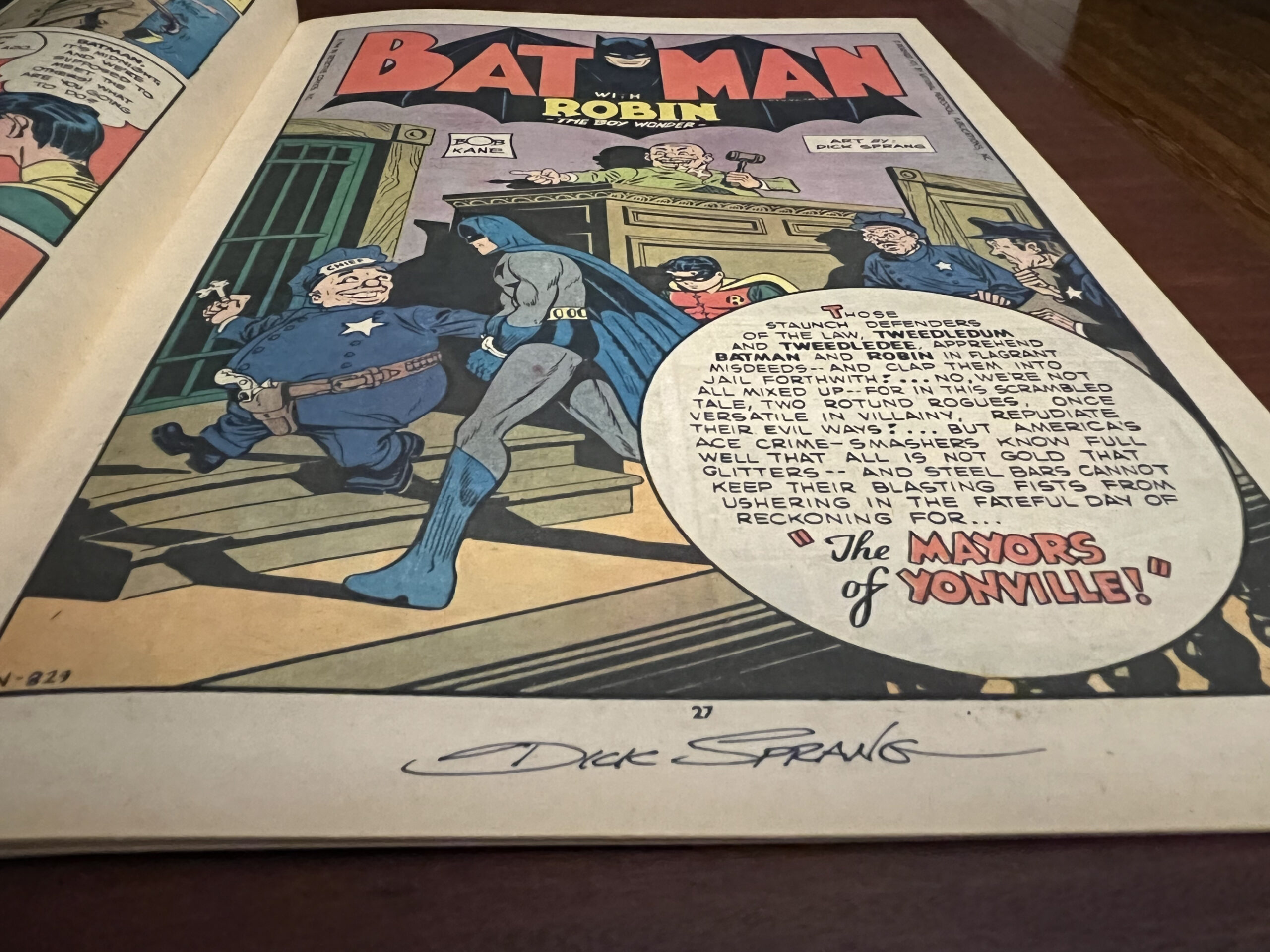 Now, do I have a certificate of authenticity to prove they’re Sprang’s signatures? Of course not, but I have every reason to believe they’re legit. For one thing, it’s an anthology book featuring a bunch of different artists: If someone wanted to fake signatures, they could have done more than just Dick Sprang. Also, it’s not just an anthology book, it’s a reprint book — so why fake Sprang’s signature in that kind of publication? More likely, a scammer would add a faux autograph to an older comic where Sprang was the main artist.

And lastly, though I am not a handwriting expert, the signatures are just too confident and clean. They don’t look like someone practicing or faking them; they appear natural. Compare them with this one from a signed print sold by Hake’s:

What does this mean for the value of the issue, given its superb condition? I dunno. Maybe you have an idea.