The GRAYSON Crew Talks Issue #3 — and the Future

Grayson #3 is our BATBOOK OF THE WEEK — and we have a triple-threat MIGHTY Q&A with writers Tim Seeley and Tom King and artist Mikel Janin:

So here’s how this went: I was not into this whole Dick Grayson: Secret Agent Man thing when it was announced. But that’s not really what this book turned out to be at all.

If you haven’t picked it up, it’s Dick Grayson on a mission for Batman deep in the world concocted by Grant Morrison in Batman Incorporated. And it reads as if our man Dick is about to run into Steed and Mrs. Peel at any moment, which would be rad.

So pick it up, starting 10/1. In the meantime, here are Seeley, King and Janin to talk about their book — and when Dick might actually have to use that gun: 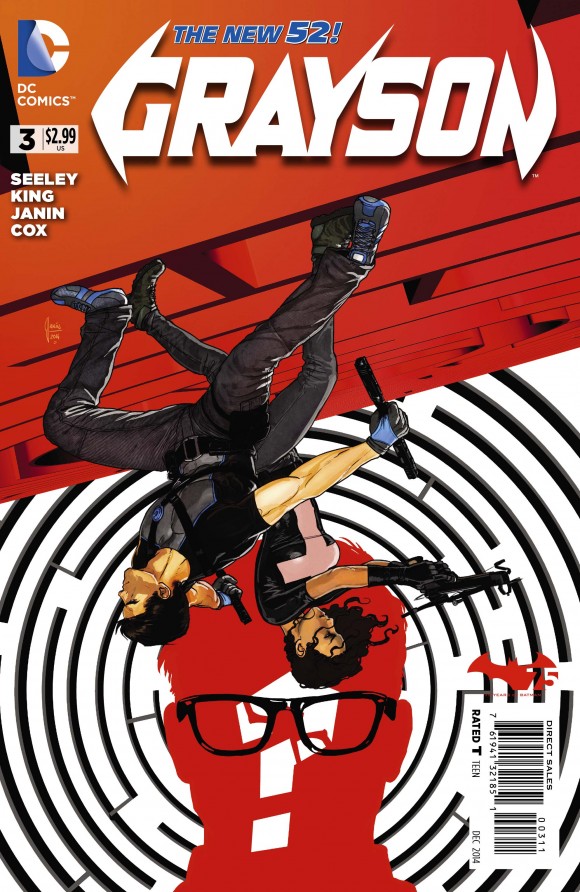 Dan Greenfield: The book is pretty steeped in Grant Morrison’s take on the character. What made you take that approach?

Tim Seeley: I had totally loved Batman Incorporated and when DC asked me to pitch a “spy take” on Dick, Spyral came to mind pretty quickly. Grant is so full of ideas, that he can just throw out a ton of crazy stuff that’s just waiting for someone else to pick up and run with.

OK, so tell us about your collaboration among the three of you and how that works.

Seeley: Basically, Tom and I call each other and have long conversations about what the book should be like and what we want to see. Then, we each write our own stories, and send them off to Mark Doyle and Matt Humphreys, as well as each other. Then we just give our own little notes … it’s pretty smooth.

King: Yeah, we worked out together what all the beats would be in the overall arc, then we chose which beats we’d individually want to riff on. I think there’s a sort of very friendly “anything you can do I can do better” aspect to the whole thing. When I read Tim’s scripts, I always think “I can’t believe he did that! That’s awesome!” This thought is then quickly followed by, “Crap. Now I have to think of something awesomer.” This thought is then followed by a lot of me worrying that I’m a professional writer who uses the word “awesomer.”

Fans lost their minds when they saw Dick Grayson with a gun — but as we’ve seen, he uses it without shooting it at anyone. Who came up with that gag?

Seeley: Me, I think! The “gun as batarang” was in my pitch actually.

King: The Batagun is all Tim. 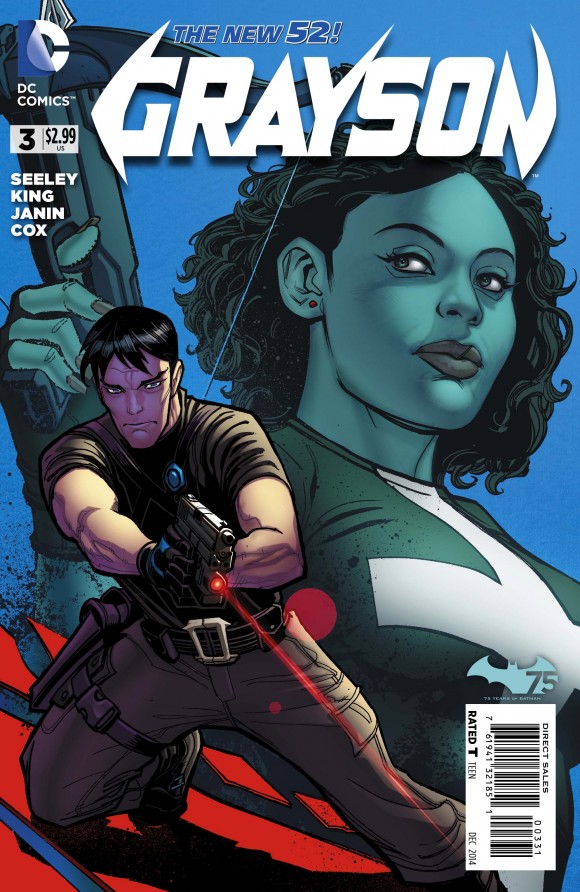 How long before he’s actually faced with a situation where he needs to use it for real?

Seeley: Issue #3 will be about the use of guns and their consequences.

King: The title to Issue #3 is “The Gun Goes Off,” which is a riff on Chekov’s gun principle: If you show a gun in the first chapter it has to go off by the third. So if you don’t count Futures End, we’re still on deadline.

Tell us about the Tiger!

King: Dick is agent 37. The Tiger is Agent 1. He’s simply the best spy Spyral has. A lot of his background will come out over time; we’ve got some huge plans for the character. For now, we can say he was born in Afghanistan, near Kandahar, and he’s worked through blood and tears to get where he is. His relationship with Dick, which will start in Issue #3, will become one of the key themes of the book. I can’t wait for people to read him, and I can’t wait to write him.

When does Dick meet Steed and Mrs. Peel? Because, seriously, I feel like this book could take place in the world of the (other) Avengers.

Seeley: Ha … I would welcome another lady in a tight, slinky catsuit.

King: That’s an awesome answer. Crap, now I’ve got to think of something more awesomer. 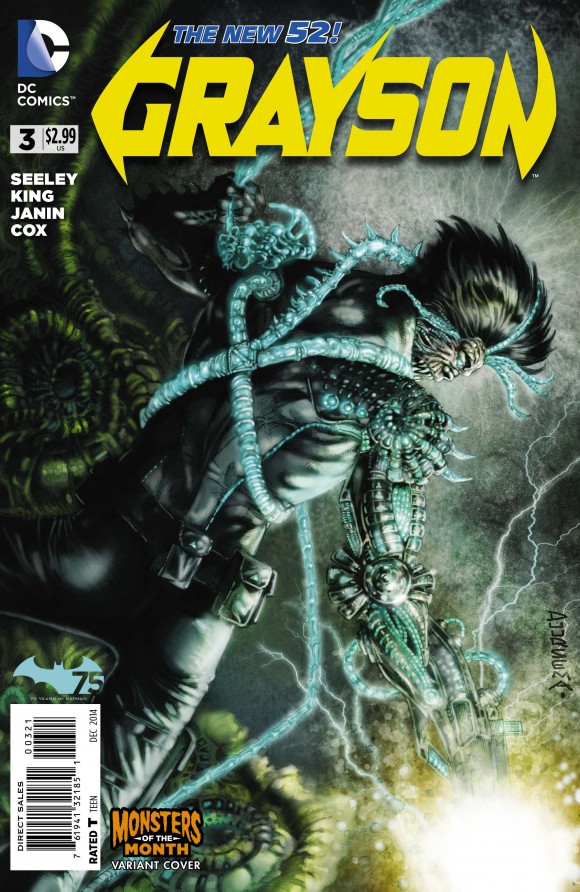 Now that was one of the awesomer interviews I’ve done lately — but wait there’s more! Here’s …

Dan Greenfield:  How did you come to this gig?

Mikel Janin: I have been in Justice League Dark for two years and a half, and I was ready for new things at DC. I was offered a couple gigs, and when I knew one of the options involved the future of Dick Grayson I didn’t need to hear more.

Tell us about how you collaborate with Tim and Tom.

I have to say how happy I am to work with these two guys. They have totally different styles, so it’s a pleasure jumping from Tim’s super-fun and quick-paced stories to the more emotional and character-based stories of Tom. I’m always being surprised by the next script! They both have a liking for experimentation with comic language and storytelling, and they leave me a lot of room for fun. It’s a great collaboration with communication flowing between all the team, including editors and colorist Jeromy Cox.

What’s the best Dick Grayson story you’ve ever read (not including this one — no cheating!)

Ha ha ha. The best is still to come! My favourite is the Wolfman-Perez run on Teen Titans, when he still was Robin. It was a surprise to me seeing this kid as a leader of a super-team. It was the first time I saw him as a superhero on his own.

Your style is pretty slick. Tell us about how you’re approaching this book.

Still learning, but I feel more confident now. I’m doing a more fresh style than in JLDark or Batman Eternal. I’m evolving to rely my art in the storytelling and character acting, instead of super-detailed designs or backgrounds. Also, it’s definitely an action-packed book, so I have to do an extra effort to keep the energy and dynamism required, and I think my sense of motion is better than in my previous work.

Also on the Batshelves this week: Gotham Academy #1 will be out, of course. Our HOT PICKS crew, especially Menachem Luchins of Escape Pod Comics, is all over it. I’m taking more of a wait-and-see approach only because it’s not my cup of meat on the face of it. I’m looking forward to being wrong.

Also also on the shelves: Batman ’66 Meets the Green Hornet #5, which has been Bat-tastic through and through; Batman Eternal #26; Detective Comics #35 — which we’ll have a special look at this week; and, Justice League #34. There’s also a Batman 75th anniversary slipcase set of trade paperbacks that includes Dark Knight Returns, Hush and the first volume of the Court of Owls. That’s not on my personal list but it’s a good one for some early holiday shopping.