The Goofy Charm of 1950’s ATOM MAN VS. SUPERMAN 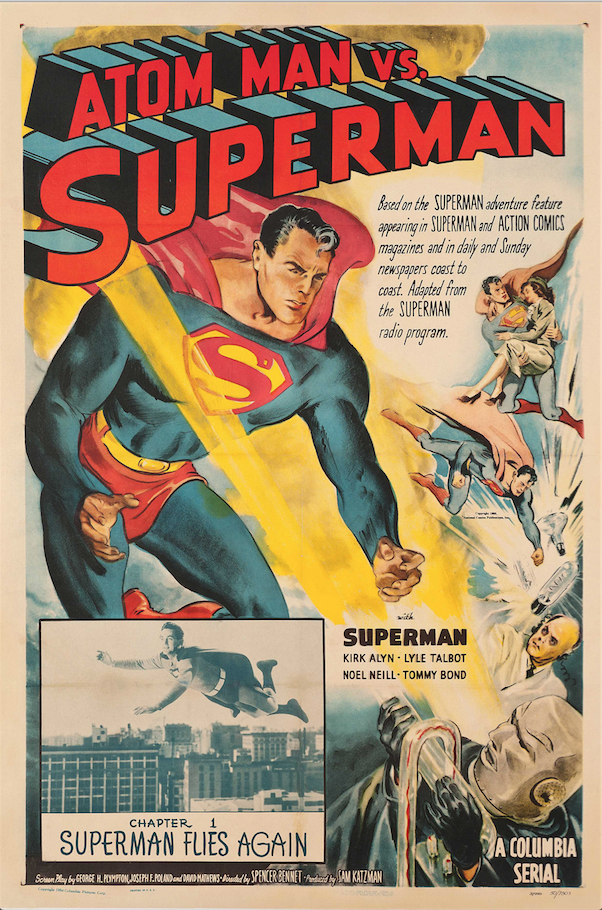 Ever since I was a kid, I have loved “versus” movies: Godzilla vs. Mechagodzilla. Dracula vs. Frankenstein. Freddy vs. Jason. Kramer vs. Kramer. There’s something about a movie just boldly stating—right there in the title–what it’s going to give you that I have always found very exciting. Forget about complicated themes or nuanced character studies, this movie is about two titanic titans squaring off! So as we await Batman v Superman: Dawn of Justice, we’re going all the way back to 1950 to look at that other Superman “vs.” movie, the 15-chapter movie serial Atom Man vs. Superman! 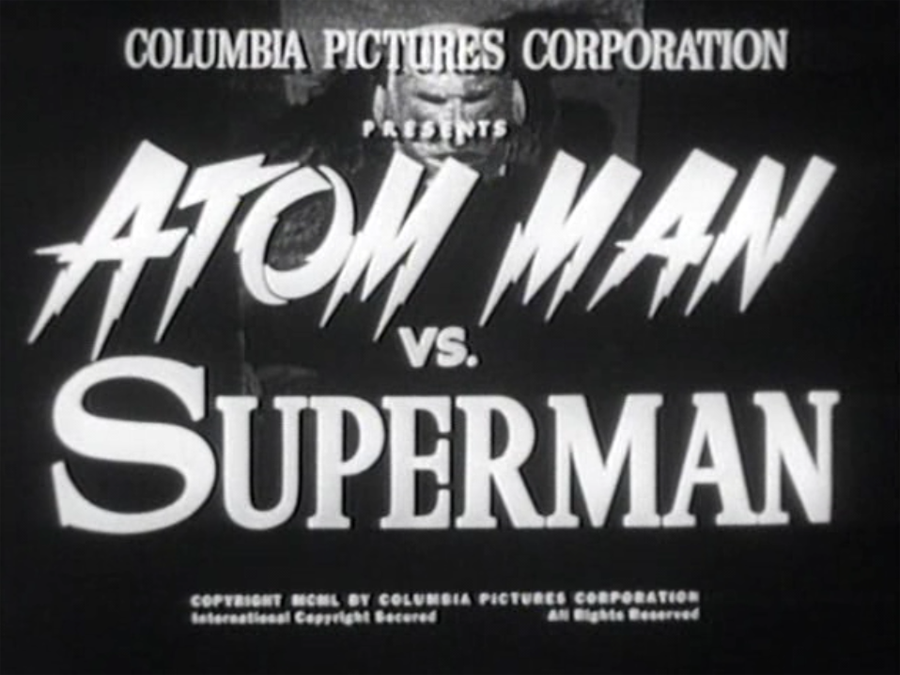 Atom Man vs. Superman (why does the Man of Steel always get second billing?) stars Kirk Alyn as Superman/Clark Kent, Noel Neill as Lois Lane, Tommy Bond as Jimmy Olsen, and Lyle Talbot as Lex Luthor (and the Atom Man—but shhh! It’s a secret).

Alyn, Neill and Bond all played these roles before, in 1948’s Superman serial, making Atom Man vs. Superman a sequel of sorts. Also, by its use of Lex Luthor as the bad guy, it’s the first comic book-based movie serial to use a villain from the original source material.

Atom Man vs. Superman opens with a series of robberies that are plaguing Metropolis. It is, of course, the work of Lex Luthor, who threatens to destroy a nearby bridge if he and his gang don’t receive all the money from the Metropolis Trust Company. He turns a destruction ray on the bridge, but luckily Superman arrives to keep it in place while police rescue some stranded motorists. The Man of Steel then finds Luthor, arrests him, and the arch-criminal is sent off to jail. A year later, everyone is perplexed by a second crime wave, since Luthor is in solitary confinement!

What they don’t know is, Luthor has created a machine that can teleport people short distances, activated by small coins pressed by the user (which sound like the Looney Tunes music starting up). He has been “beaming” in and out of his jail cell, back to his hideout, where he has been masterminding his gang and their numerous robberies. 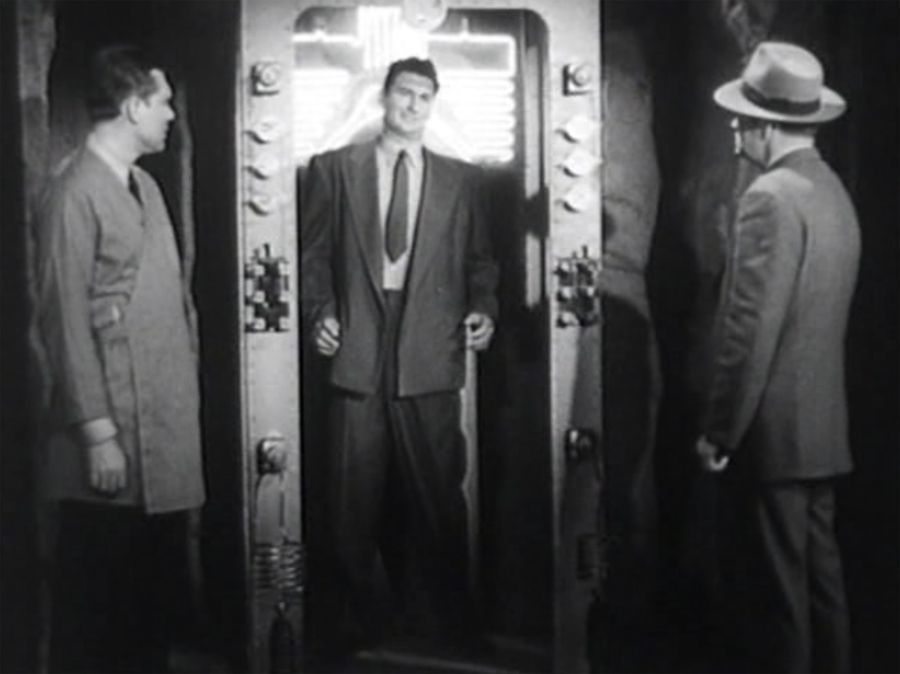 Luthor is eventually granted parole (while a kid caught with three ounces of pot serves out his 50-year sentence), and he pledges to go straight, saying he is getting into the television business. But secretly, he is plotting to rule the world in his alternate identity of Atom Man!

What follows is a series of back-and-forth adventures where Luthor (inside Atom Man’s giant, bedazzled crock-pot helmet) threatens Metropolis, only to have Superman stop him, albeit temporarily. In Chapter Eight — “Into The Empty Doom!” — Luthor grabs an unconscious Superman (who got the whammy put on him by some Kryptonite) and transports him into “the empty doom of space.” This leads to a neat sequence where a ghostly Superman tries desperately to communicate with his friends, but no one can see or hear him. He manages –through sheer force of will—to move the keys of Lois’ newfangled electric typewriter to relay a message, which sends Lois to Luthor’s cave to try and bring Superman back to our reality. 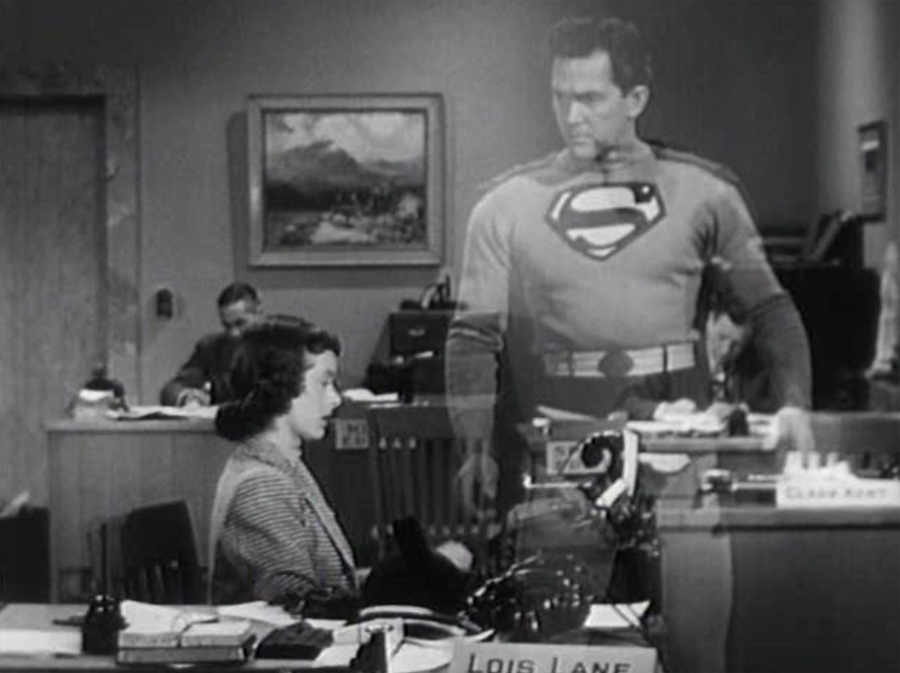 Later on, Lois, still not realizing who Atom Man really is, quits The Daily Planet and goes to work at Luthor’s TV station(!), filing interviews where she asks random people on the street very boring questions, not a great start for the fledgling new medium.

Eventually, Luthor is exposed as Atom Man, and he goes for broke by aiming a cyclotron at Metropolis, which starts an earthquake. While Superman is saving people, Luthor teleports Lois onto a rocketship, blasting off into the ionosphere. Superman catches up to it, rescuing Lois and capturing Luthor once again. With Metropolis now safe, Lois returns to The Daily Planet and her side job of exposing Clark Kent, since she believes—as always—that he is really Superman. 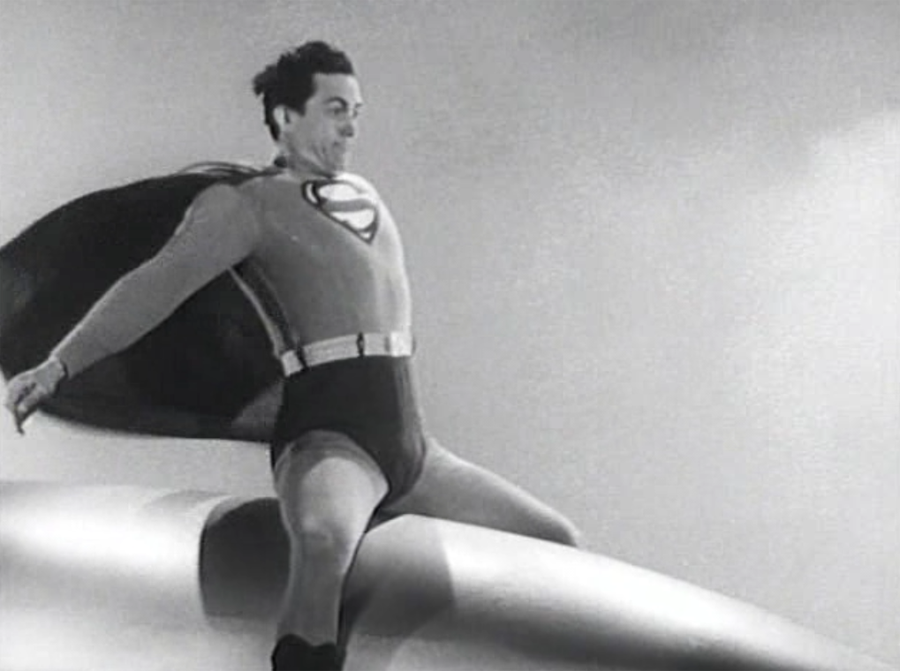 Atom Man vs. Superman was produced by Sam Katzman, who specialized in extremely low-budget films. The lack of funds is glaringly apparent here, in numerous places: The serial’s 15 chapters make extensive use of stock footage. Atom Man is meant to be fearsome, but his costume is so ridiculous that it’s remarkable any of his henchmen take him seriously. When the Metropolis Marvel has to perform some amazing Superman-y feat of heroics, it switches to animation (which, truth be told, I found kinda cool once I got used to it). At one point, Luthor is talking to one of his goons, and basically states they have 12 minutes to kill, so he helpfully explains Superman’s origin, and we cut to footage of Krypton cribbed from the 1948 serial (featuring events Luthor did not witness). 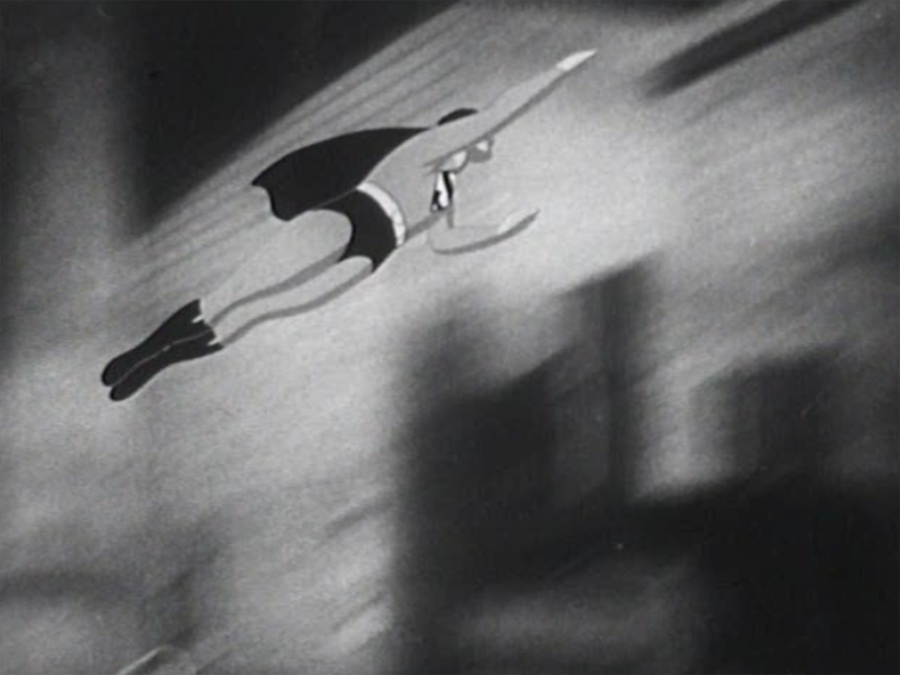 So while it’s easy (and fun!) to rag on Atom Man vs. Superman, I did find myself with a goofy grin through most of it. The animated sequences reminded me of the Max Fleischer Superman cartoons, and that’s never a bad thing. Sure, there’s a lot of stock footage here, but sometimes it’s niftily applied, like when Superman stands in front of a runaway train and stops it in its tracks. They probably spend more money on 15 minutes of Supergirl than they did for all 15 chapters of this, so you have to let things slide a little.

As for the performances, Noel Neill (who would of course go on to play Lois in The Adventures of Superman) makes for a very feisty Lois Lane—in one scene after Lex has explained yet another dastardly plan, she responds with “How cute.” There’s another moment where she steals Luthor’s scribble pad off his desk, and thanks to the pencil impressions, figures out where Lex will strike next (a gag I swear the Coen Bros. stole for The Big Lebowski).

This Lois is so determined to reveal Clark Kent is Superman that in Chapter Five our hero is reduced to splashing a cup of water in her face and running away. 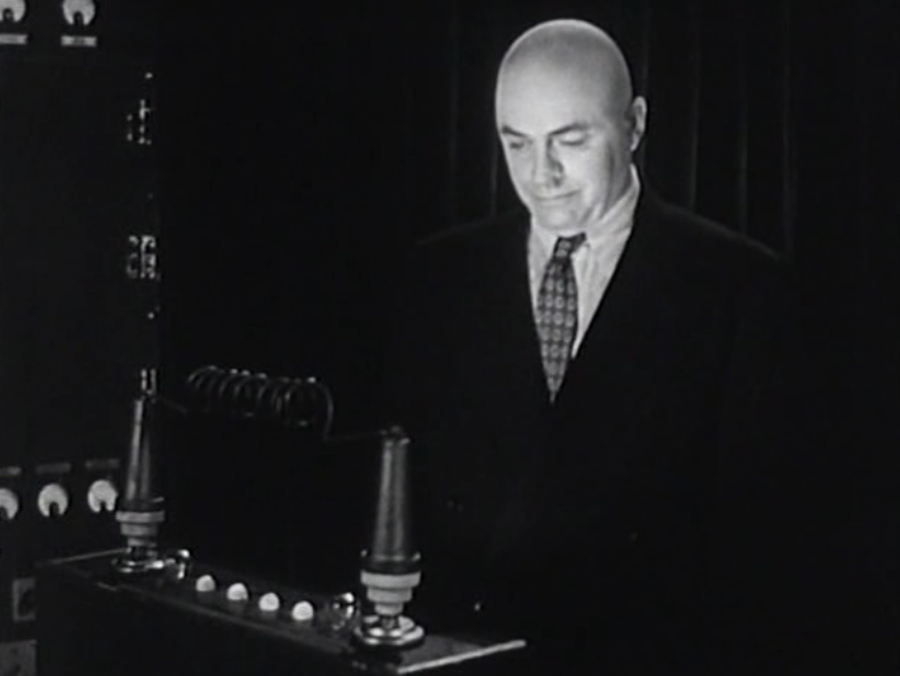 Lyle Talbot (who was on the other side of the law in the 1949 Batman and Robin movie serial, playing Commissioner Gordon!) wears a perpetual scowl as Luthor, as if he’s just barely tolerating having to deal with all these simpletons, which seems very Lex Luthor-ish to me. Although at one point he tells an underling, nervous to break the news to his boss that Superman has foiled another plan, “No need to tread lightly upon my feelings, I’m the first one to admit Superman is my arch-enemy.”

As a nice contrast, Kirk Alyn makes a very upbeat, gregarious Superman. Sure, he at times suffers some ignominious moments (like when he scoots out of the way of a falling boulder, as opposed to smashing it to bits, which we all know he could do), but Alyn’s Man of Steel is like a wrestler, preferring to punch and tackle bad guys with a smile on his face. (There is one glorious exception to the cash-strapped Superman exploits—in Chapter Five, “Atom Man Tricks Superman,” Supes simply throws a crook miles into the air, repeatedly, until he talks.) 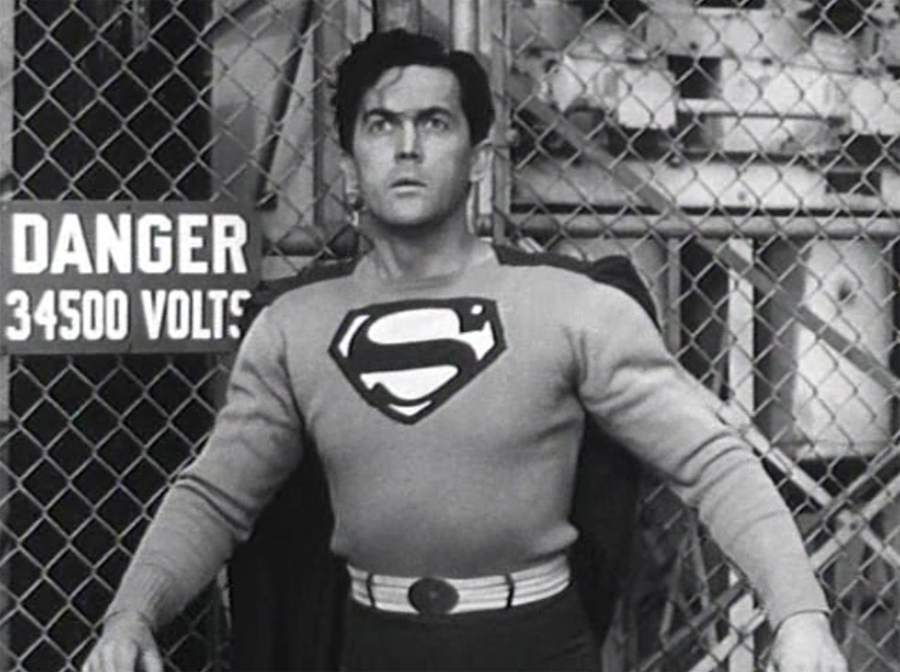 I guess not to spoil the illusion, Kirk Alyn receives no credit; Superman is simply listed in the cast as himself. Alyn later went on play another DC superhero, Blackhawk, in a movie serial, and of course you can spot him as Lois Lane’s Dad in the 1978 Superman movie. Unlike other Supermen I could mention, Kirk Alyn’s Man of Steel looks like he’s having fun.

(Speaking of the 1978 movie, it’s remarkable how many inadvertent connections Atom Man vs. Superman has with later live-action versions of the character: In one chapter Superman is exposed to Kryptonite during a public event, just like in Superman III. Superman floating in the Empty Doom can’t help remind one of the Phantom Zone, which wouldn’t be invented in the comics until years later. When Superman finally escapes it, The Daily Planet runs a headline declaring “Superman Returns!”) 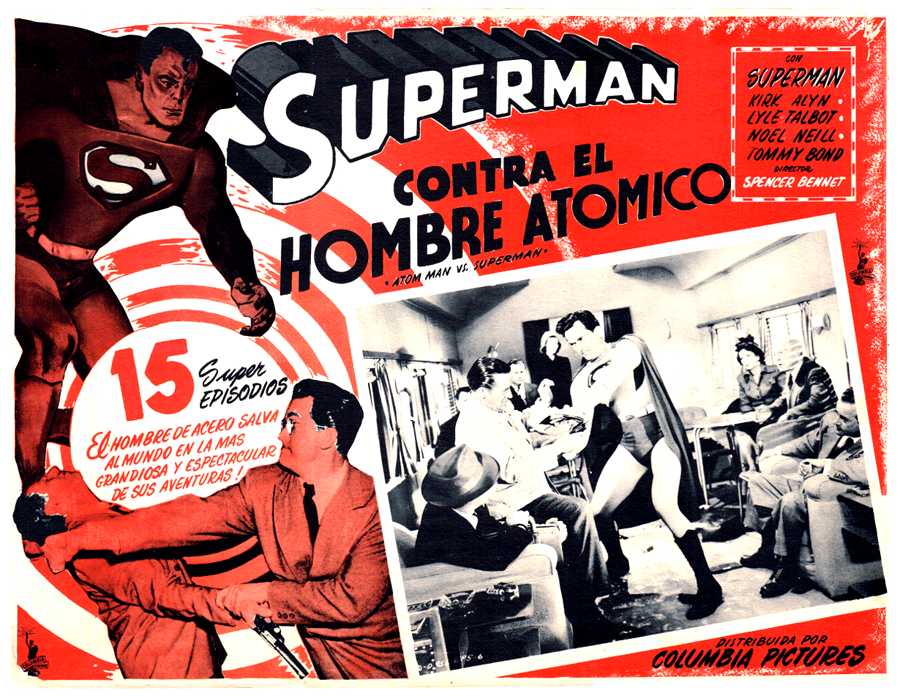 By 1950, TV was starting to seriously threaten the movie business, so you have to think the evil Lex Luthor going into television was the filmmakers’ gentle jab at the new medium. Atom Man vs. Superman director Spencer Gordon Bennet would hold onto the dying movie serial racket all the way to the end, helming the very last serial ever produced by a studio, 1956’s Blazing The Overland Trail.

Considering how popular Atom Man vs. Superman was (IMDB states it is the highest-grossing serial in cinema history), maybe everyone thought there was a lot more life left in the genre. They were wrong. Of course, in just a few years Superman himself would move to TV, enchanting a whole new generation of kids and implanting George Reeves as their live-action Superman.

Will Henry Cavill, in his second go-round as the Man of Steel, ever be able to say the same? I guess we’ll find out!

Rob Kelly is a writer/artist/comics and film historian. He is the co-host of The Fire and Water Podcast (and the host of its sister show, The Film and Water Podcast), the co-creator and writer of the award-winning webcomic Ace Kilroy, and the creator of the book Hey Kids, Comics!: True-Life Tales From the Spinner Rack. He is hoping at the end of Batman v Superman, Jesse Eisenberg puts a giant metal pot over his head.