THE FLASH #123: An INSIDE LOOK at One of the Most Important Comics Ever

Home » COMICS HISTORY » THE FLASH #123: An INSIDE LOOK at One of the Most Important Comics Ever

A SNEAK PEEK at The Flash #123 Facsimile Edition… 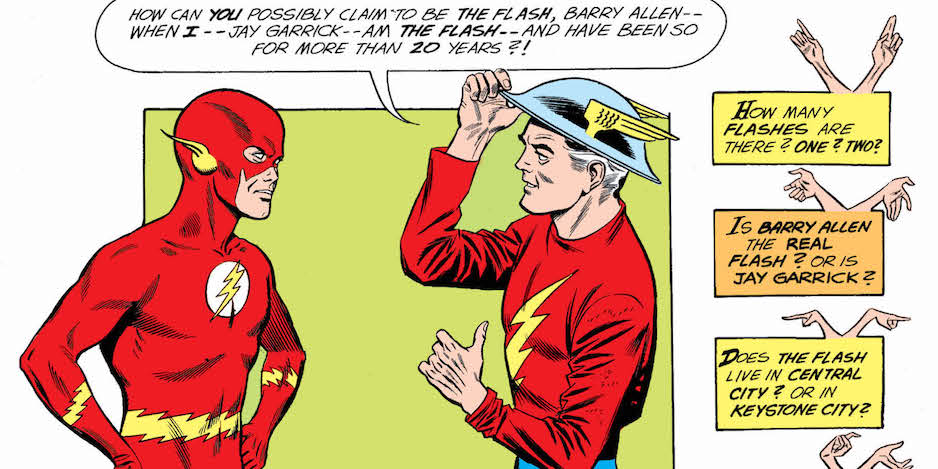 I dig them all pretty much on principle but there are some that stand out above others for their sheer historical import — and Feb. 26’s The Flash #123 Facsimile Edition is certainly one of those.

The original issue, released in 1961, featured the debut of the DC Multiverse when Earth-One’s Barry Allen first met Earth-Two’s Jay Garrick in the seminal Flash of Two Worlds!, written by Gardner Fox, pencilled by Carmine Infantino and inked by Joe Giella. 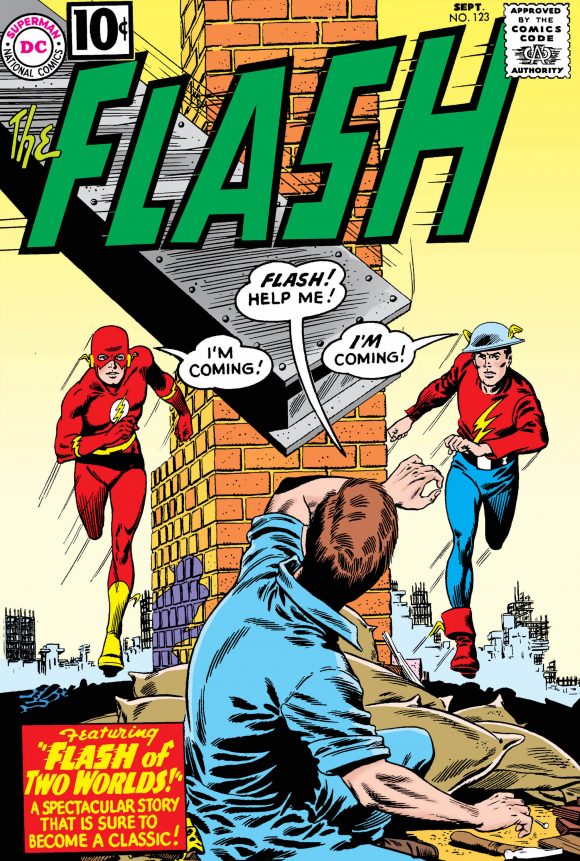 Cover pencilled by Carmine Infantino and inked by Murphy Anderson

Now, this story is probably one of the most reprinted ever. (More on that below.) But, as I always point out, the Facsimile Editions are an amazingly affordable way of experiencing comics history in its original context — with ads, letters, extra features and whatnot.

Just like Barry Allen transports to Jay Garrick’s world, you get to transport to a world of “Frontier Cabins” that you could buy for a buck or $1.98 sets of 204 toy Revolutionary War soldiers.

“Team-ups and crossovers were a great hook, and I frequently used them on the titles I worked on, playing around with different pairings and crossovers,” famed editor Julius Schwartz wrote in his appropriately named 2000 autobiography Man of Two Worlds. “One of the best story ideas that I came up with using this motif was Flash of Two Worlds!” 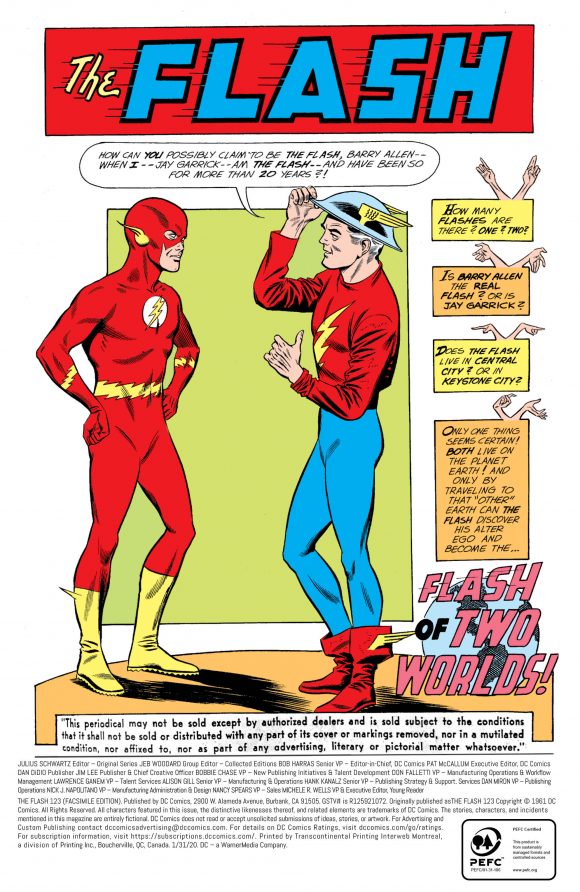 “In the Silver Age series storyline, Barry Allen (aka the Flash) took his superhero name from a super speedster featured in Flash Comics, a series that he had read when he was a kid that featured Jay Garrick of Keystone City, who had superspeed,” Schwartz, who died in 2004, continued. “Thus Allen had modeled himself after his idol, “the Fastest Man on Earth,” the Golden Age Flash who even in his fictional reality was also a fictional character.

“In Flash of Two Worlds! … I allowed Barry Allen to pass into the alternate reality that he thought of as a fictional world by vibrating at superspeed, thus allowing his molecules to pass into the alternate reality that encompassed the same space as our world… and actually meet and team up with Jay Garrick. This established a comics precedent of having a character from one universe interact with a character from another universe, the ultimate in crossovers since it was basically Flash meets Flash.” 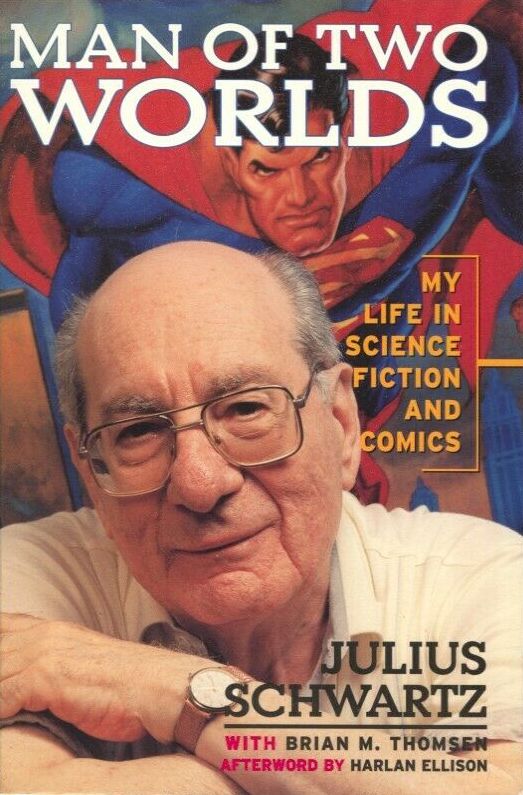 “With the tremendous success of Flash of Two Worlds! we soon had crossovers galore where Silver Age characters met their Golden Age predecessors or perhaps just did things that couldn’t be done in normal continuity (like dying),” Schwartz added. “The high point came with Crisis on Earth-One! (Justice League of America #21 and #22) a crossover story between the Earth-One heroes of the Justice League of America and the Earth-Two heroes of the Justice Society of America. Its tremendous success led to an annual series of multiple-Earth crossovers, and every possible configuration of collaboration sold well.”

As important as those sales were, the stories established the modern storytelling framework of the DC Multiverse, which has been rejiggered and rebooted many times over since — with more to come.

In any event, dig some more story pages from The Flash #123 Facsimile Edition, followed by some groovy ads and the always entertaining letters column: 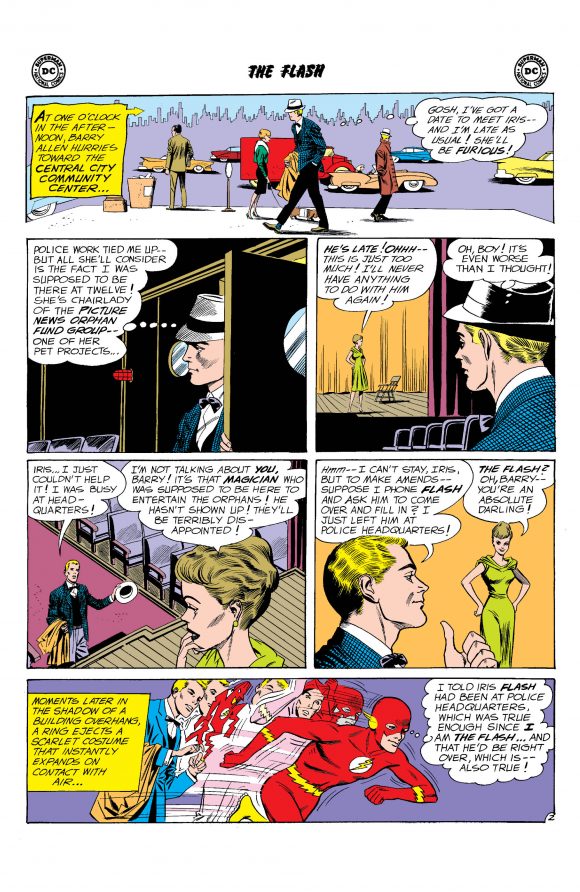 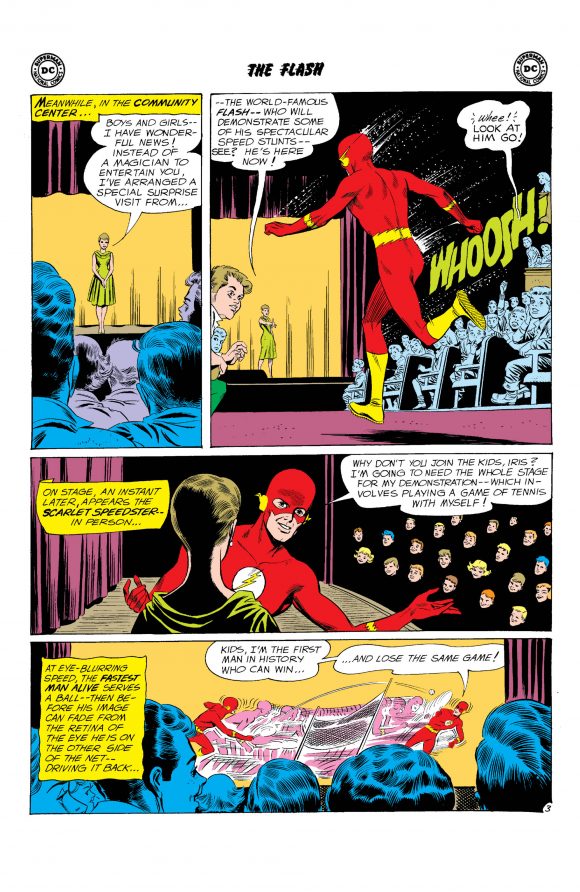 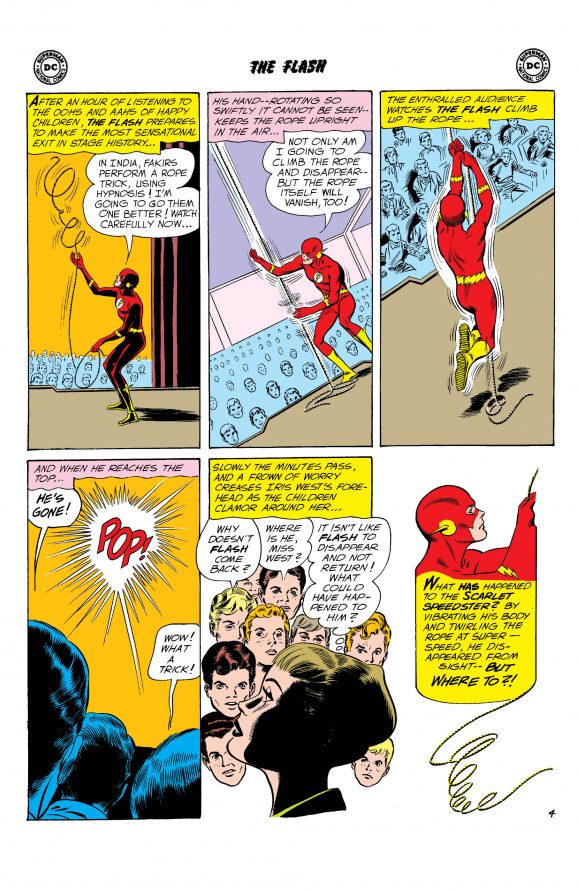 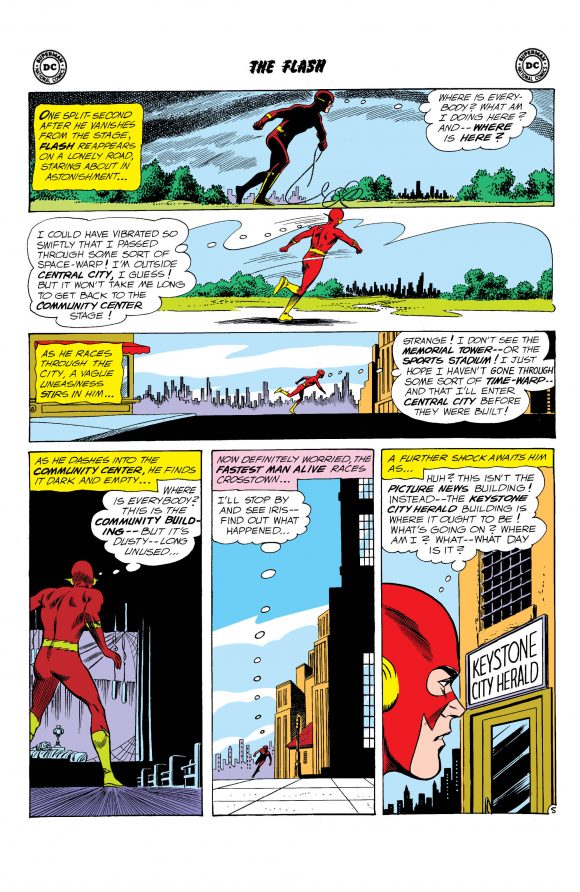 I love the little Flash logo atop each page, speed lines and all.

OK, now check out a few of the aforementioned ads… 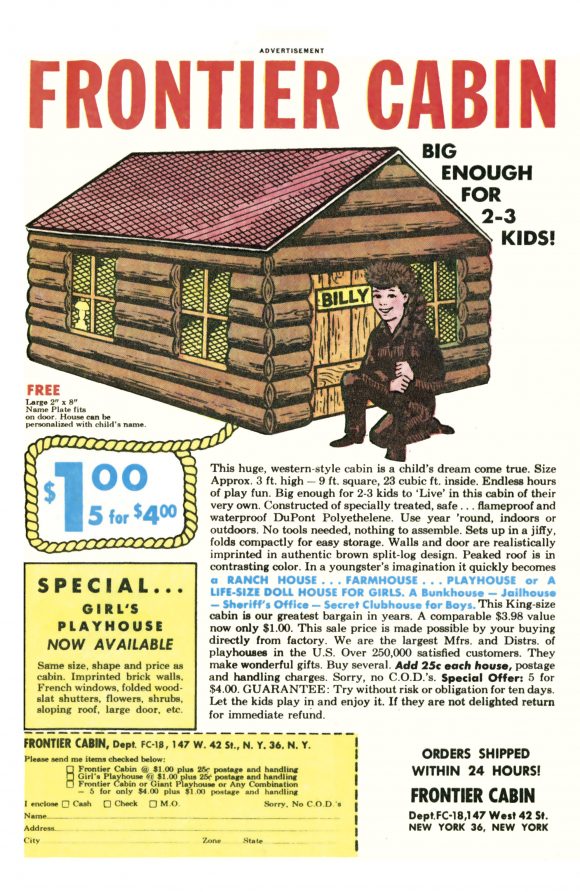 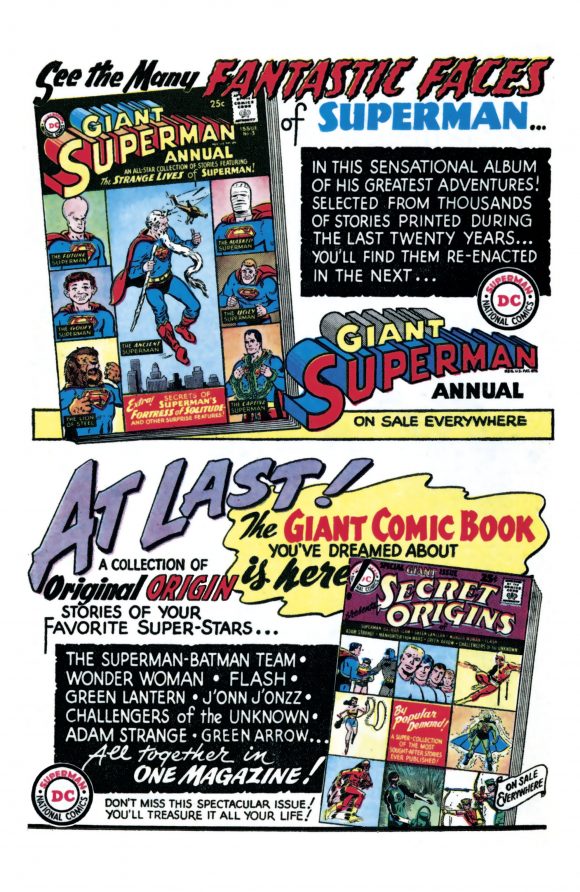 … and the letters column: And, hey, there’s this swell feature: 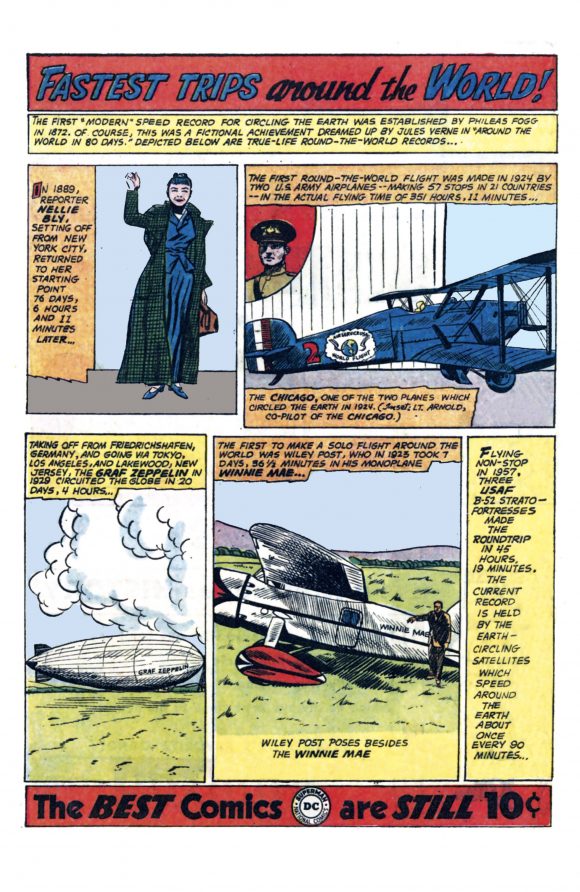 — The $3.99 issue comes out the same day as the Flash of Two Worlds! Deluxe Edition hardcover, which features not just The Flash #123, but a number of other Barry Allen-Jay Garrick team-ups from the ’60s. The book lists for $29.99.

— There’s more: The week after — March 4 — The Flash #750 comes out, complete with decade-tribute variant covers. Click here for the final versions — with era-appropriate logos. They’re neato.

— Requisite Price Comparison: An unslabbed FN copy of The Flash #123 recently sold for $765. The Facsimile Edition, again, is four smackers.