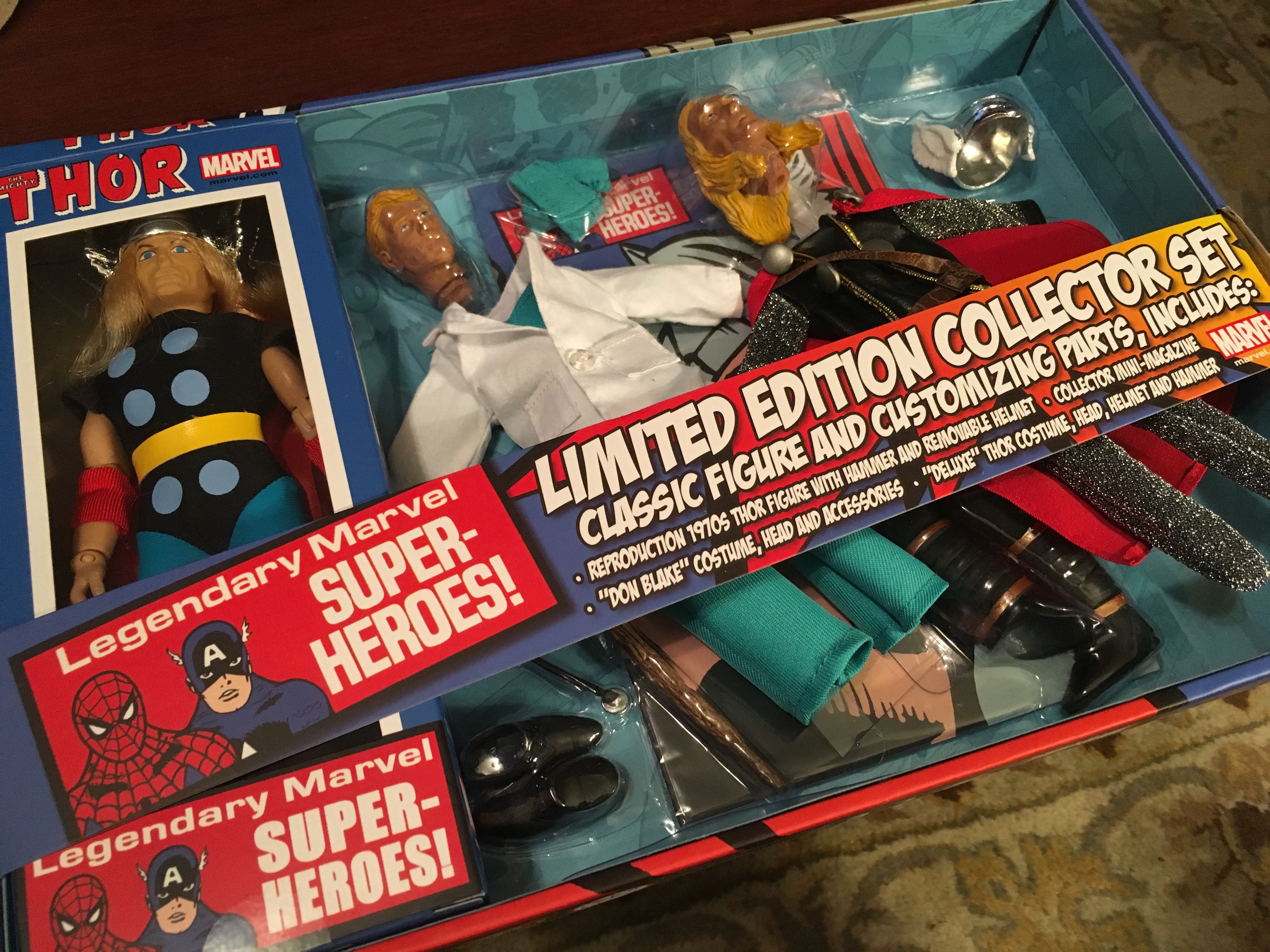 The florid tongue, the meshing of myths moderne and ancient, I foundeth all of sayed dressing of windows to be alien of concept, dragons of imagination I could not conquereth with mine thousand armies.

Mayhap it were mine own interest in heroes not like Gods of Thunder but in those vigilantes urbane that forced if not to scoffeth than to at the very of leasts, declare that Thor was not of interest to mine eyes and otherwise deeply imaginative imaginations. 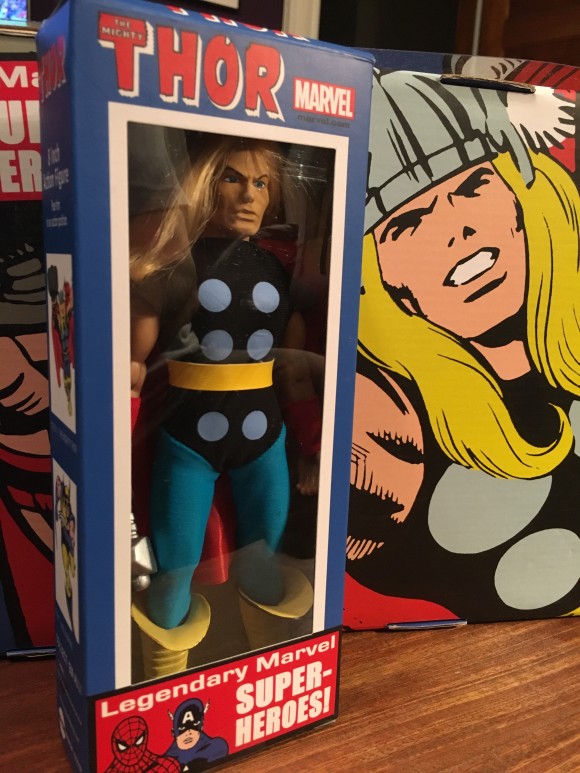 Hwaet! This doth not meanest I find those followers of Asgard’s son unworthy. Or, thus, Odinson his fair and mighty self. Just I mean, that the mightiest of immortals outside of Valhalla itself, nayeth of my cuppa. 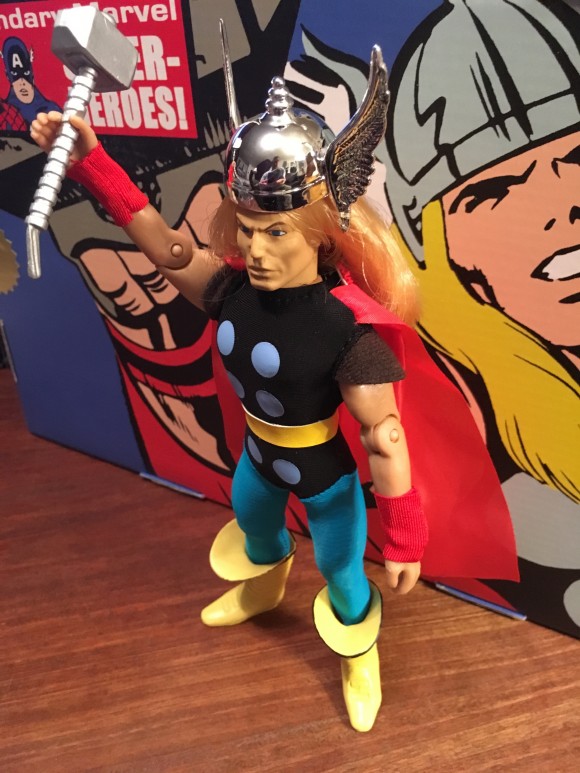 Thus and therefore, those daring men and women of Diamond, minds as sharp as those from whence they derive their nominal designation, deigned to produce Thor as their most timely — pun intendeth — of Mego creations, I cried forth to the heavens as if I held Mjolnir aloft, and shouted:

“What ho! Must I have this plastic and cloth finery, on a scaleth of eight mere inches? Mere eight inches? No! Mighty!”

A Thor whose imagery echoes precisely his powerful ancestry — not Odin but Thor himself, lo from the decade that measured in the nineteen hundred and seventies of this, the modern era of Midgard. 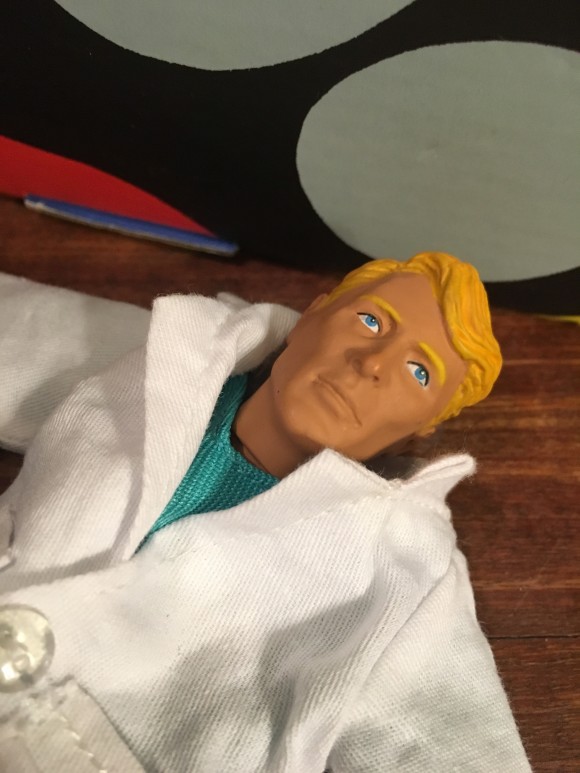 Yet more! A veritable feast of finery! There, the accountrements of Donald Blake, medicinae doctor. Clothes suitable for the hobbled practitioner of the healing arts! A protective coat for the laboratory, a device that allows to hear the powerful thumping of hearts, the profound breaths of all who seek to have said breaths heard. A stick! A stick!  A stick when wielded — nay pounded! — transforms with the heraldry of the heavens to become with electric fury the great Mjolnir itself!

Mjolnir! This tray provideth two of the hammers of the gods: HAMMERS OF THE GODS! From the land of ice and snow! A hammer that resembleth the original of the Megoland and a newer, even more robust HAMMER! 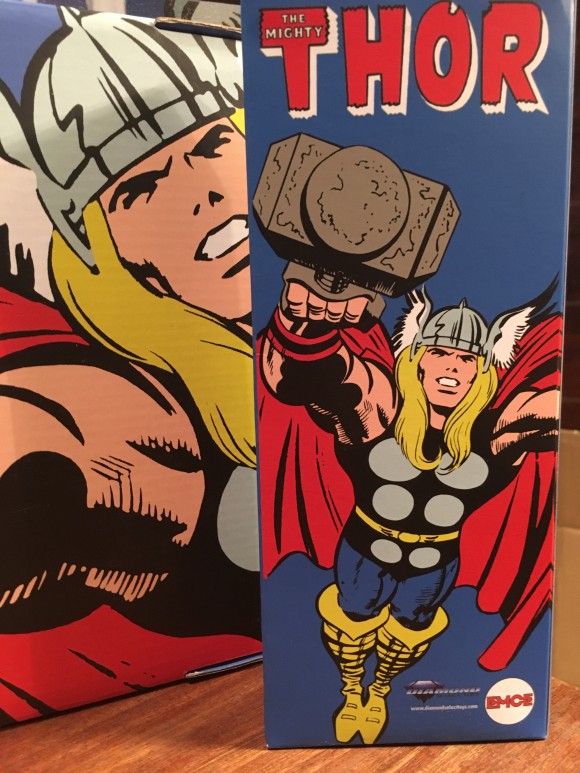 Why, I cry, why? Why two HAMMERS? For what purpose! For the heroism of Thor, tis why! A second HAMMER for a second coat of battle, one that resembleth the ancient god’s modernity! Clothing designed to appear as such chain mail worn by warriors of olde! Straps of the finest — if swice — leather! Boots! And a fine head with hair of gold not rooted but molded — molded with the artistry of the great craftspeople of Nidavellir. 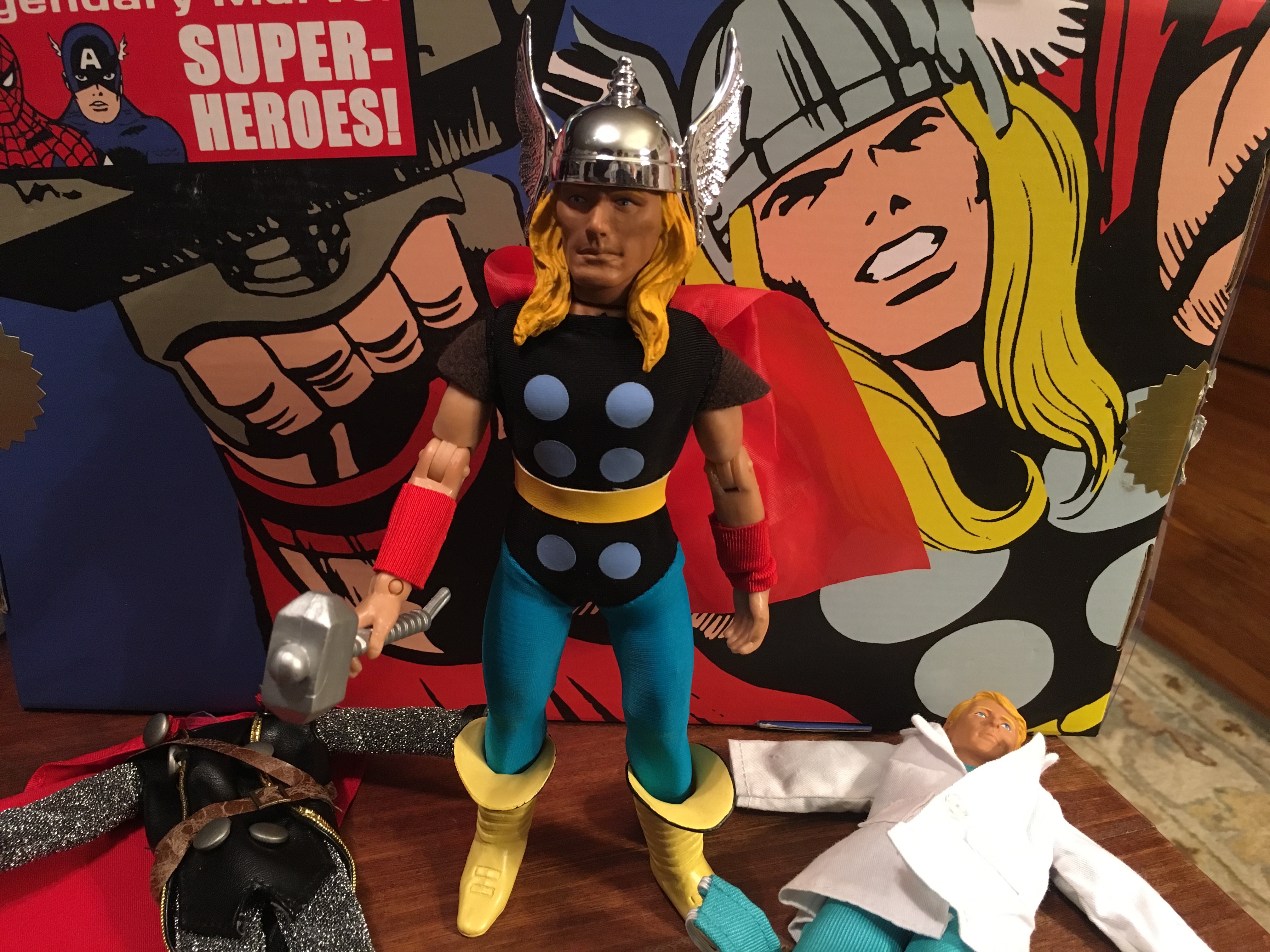 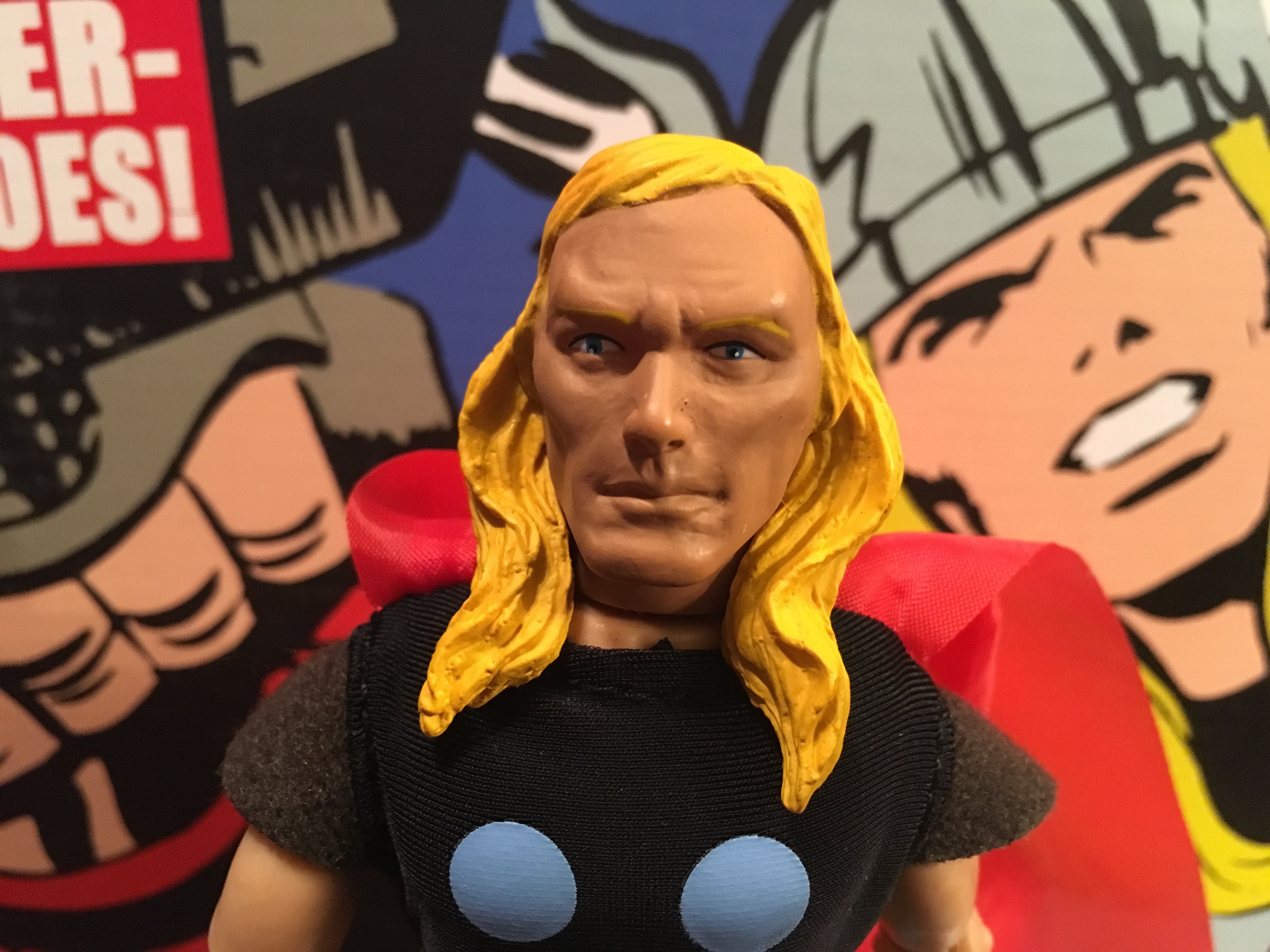 Traverse the Bifrost, whether across the web of the world or toward the hallowed halls of your peddler of the comic arts! Forsooth, for 80 units of modern currency as accepted in the American realm of Midgard, you too can hold and own and embrace that tray of treasure defined and refined by the heralds of Diamond Select! 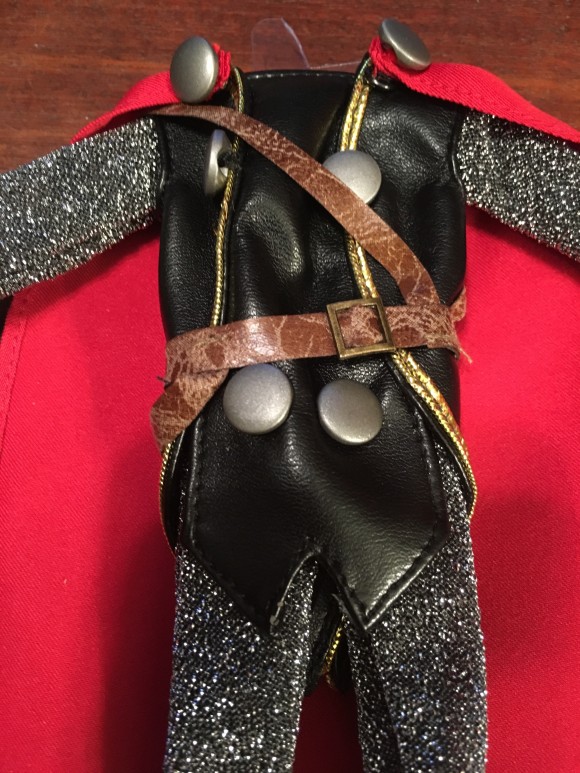 Tis 80 units too wealthy a bounty to surrender? That dependeth on thine perspective. Do you hail the hale and hardy or even hearty Thor? Then affirmative! 80 units tis a pittance! A robust modern Mego accompanied by the regalia of physicians and warriors — nay gods! — alike? Forsake thine frugality. Tho and lo for the followers less devout, mayhap said units would be used in a realm not of this one.

My heart! It leaps!

My heart! Yea, it leaps with the power of a thousand bolts of lighting! Lighting called down by he who is worthy … THOR! 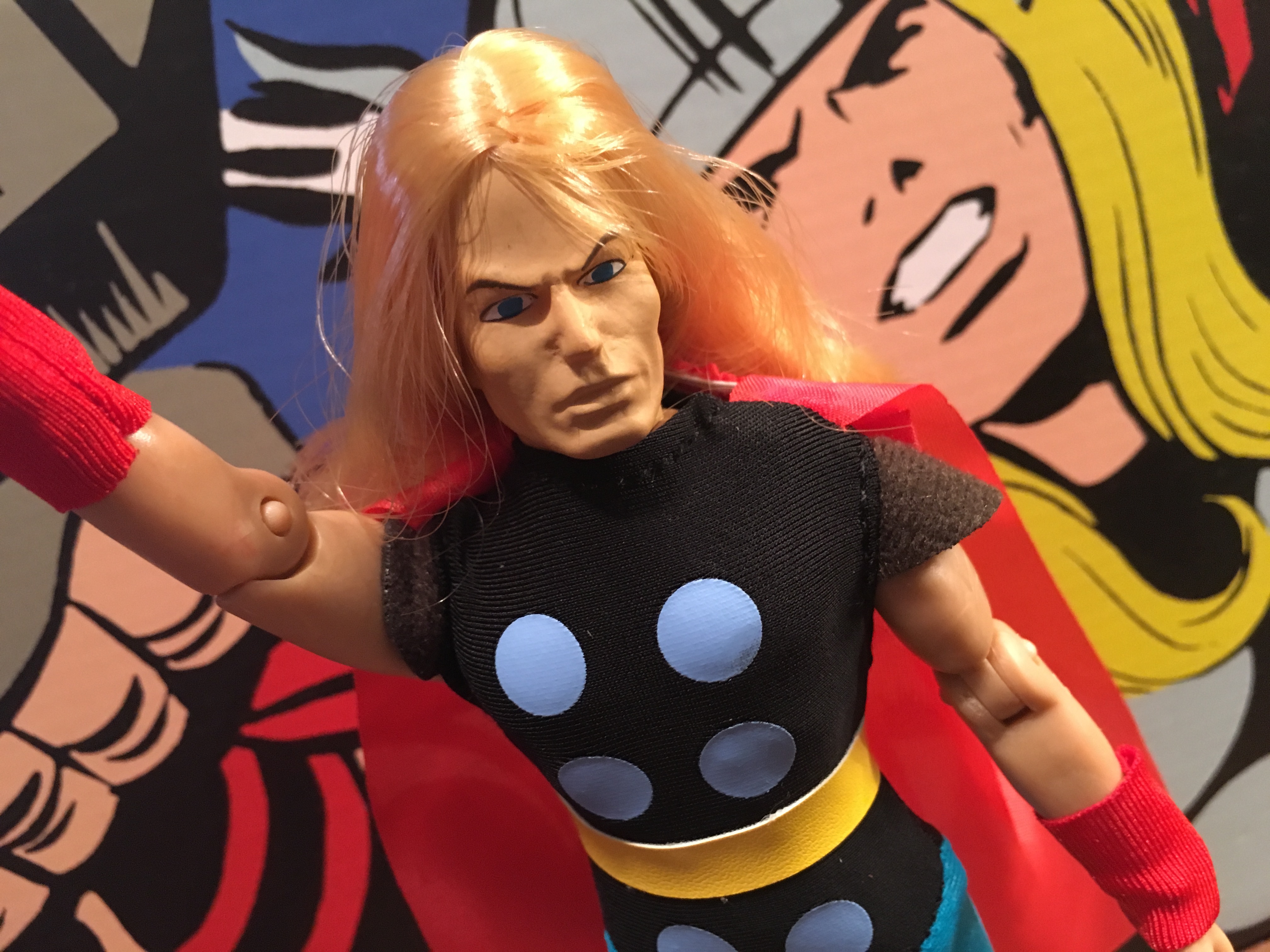