THE DEATH DEALER: Frazetta in His Own Words

Home » COMICS HISTORY » THE DEATH DEALER: Frazetta in His Own Words

EXCLUSIVE: A hidden gem of an interview… 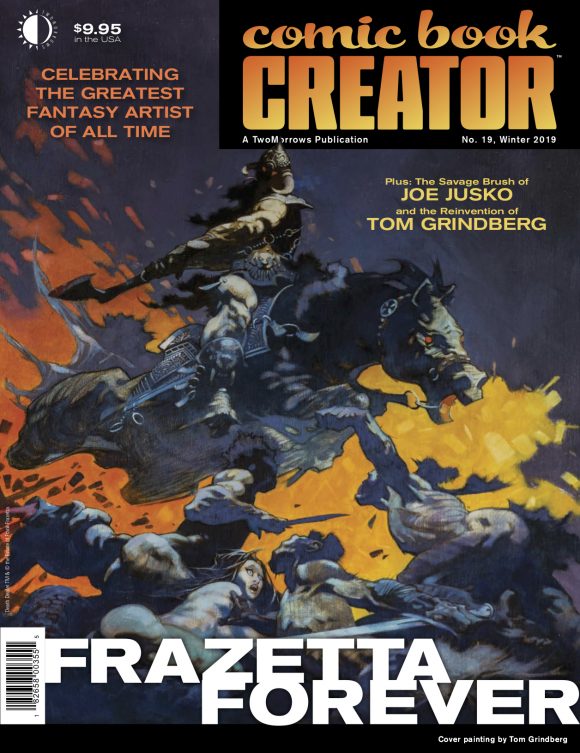 The new issue of Jon B. Cooke’s Comic Cook Creator is out Feb. 27, and the cover subject is, as the mag notes, the greatest fantasy artist of all time — the late Frank Frazetta.

The highlight is a 1984 interview with Frazetta, in which the illustrator covers a broad array of topics, but there’s also a series of sidebars on his lesser-known works. It’s cool stuff.

Not only that, there are plenty of other features, including in-depth looks at Joe Jusko, Tom Grindberg, Mary Fleener and much more. 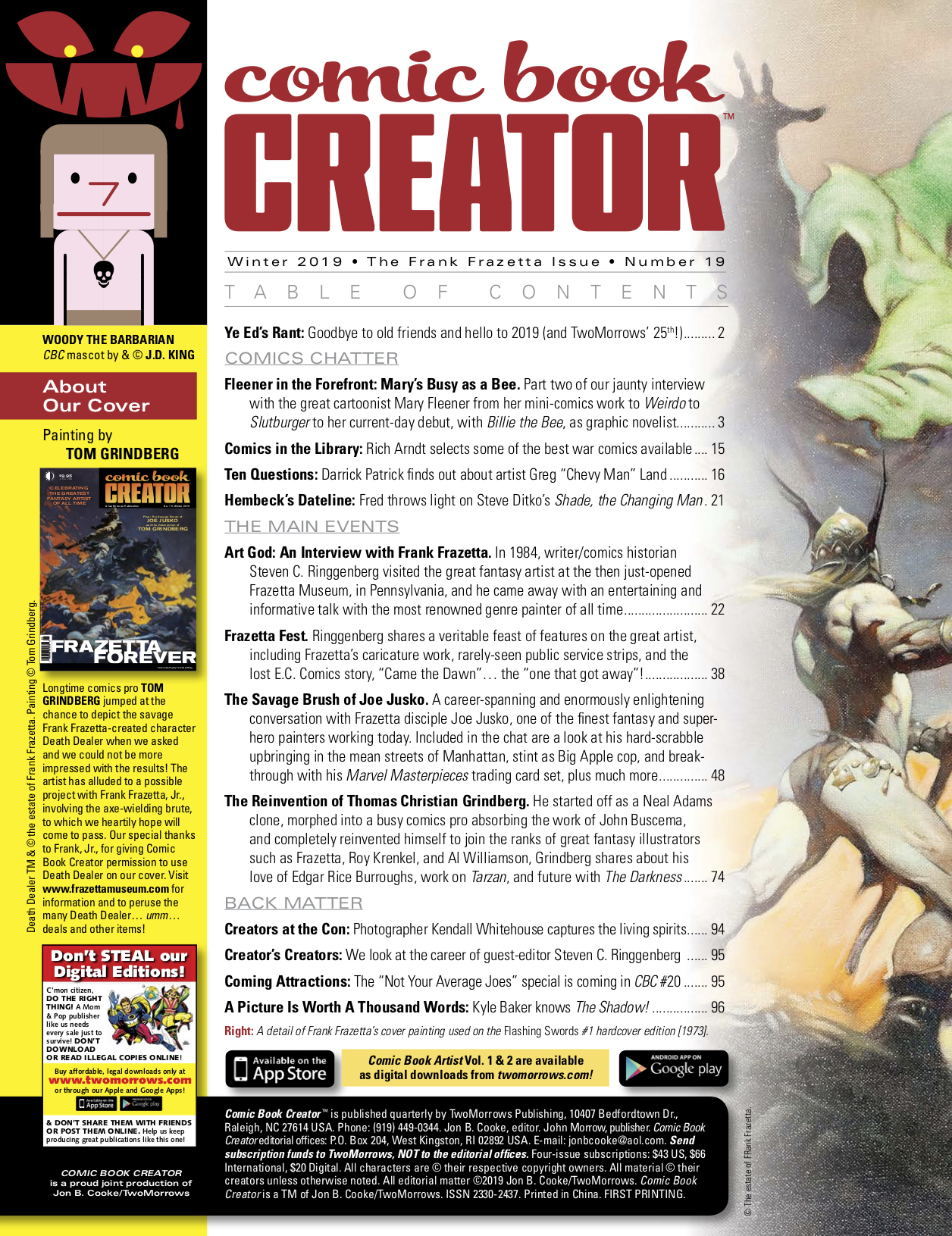 Anyway, for our regular EXCLUSIVE EXCERPT, I’ve pulled out a segment where interviewer Steven C. Ringgenberg discussed with Frazetta his best-known creation — the Death Dealer. You’ll dig it.

And make sure you pick up the mag itself — because this just gives you a taste of the much lengthier complete interview: 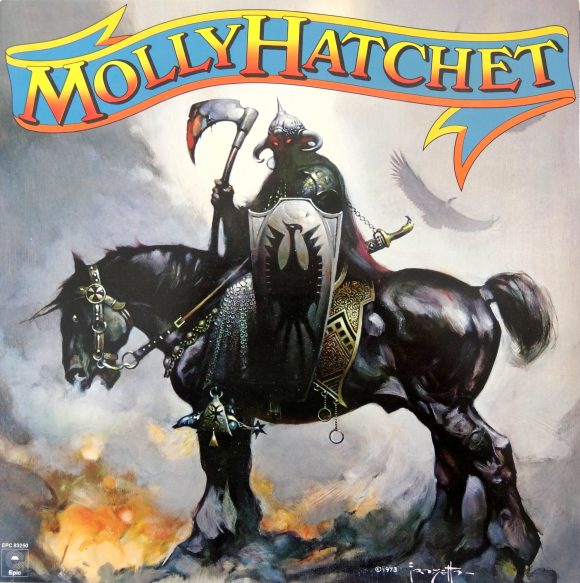 The Death Dealer on the cover of Molly Hatchet’s self-titled debut album in 1978. For a long time, it was the best-known use of the character.

Steven C. Ringgenberg: Ellie mentioned that you were doing a new series of the Death Dealer character. (Ellie was Frazetta’s wife. — Dan)

Frazetta: A new series. It’s no big secret. The Death Dealer… I’ve got, how many have I done? Four. I don’t know if they’re as good as that one [Indicates the original Death Dealer painting on a wall], but boy, they’re damn close, or maybe better.

Frazetta: Same character, with one difference. This time I own him. Not the Howard Estate [as with] Conan… But this is my guy. I own him. So, you know, like… the Howard Estate, I got so many negative comments in the past. They hardly acknowledged that I had anything to do with the success of Conan and crap like that… they were very specific in the questioning that they were giving me a lot of credit for this thing and, uh, he said, Oh, I don’t know. I prefer some of the other artists, and he reeled off other artists’ names and that sort of thing, which really kind of struck a pretty sensitive spot on me, you know? Get serious! What do they think I’m going to do? Hold them up for royalties or something? You know it’s like they’re running frightened. Frazetta, they know Frazetta did this with his own little fat fingers and maybe technically he’s got something coming to him, but I didn’t care. I really think that’s…

Ringgenberg: What are the Death Dealer covers for? Are they going to be paperbacks?

Frazetta: They’re going to be paperbacks and whatever else comes after that. And if they want to merchandise the shit out of it, good luck! I doubt that they could. I’ve had quite a problem even getting stories written around him. I mean, what do you do with a death symbol? It’s very difficult, so I’ve been supervising the writing and going back and forth with different writers, having a hell of a time making this guy work. So, I’ve created different worlds and so it’s a little more believable. But basically, the thing is to have a nice package, a nice cover. Very few people that I know read Conan. 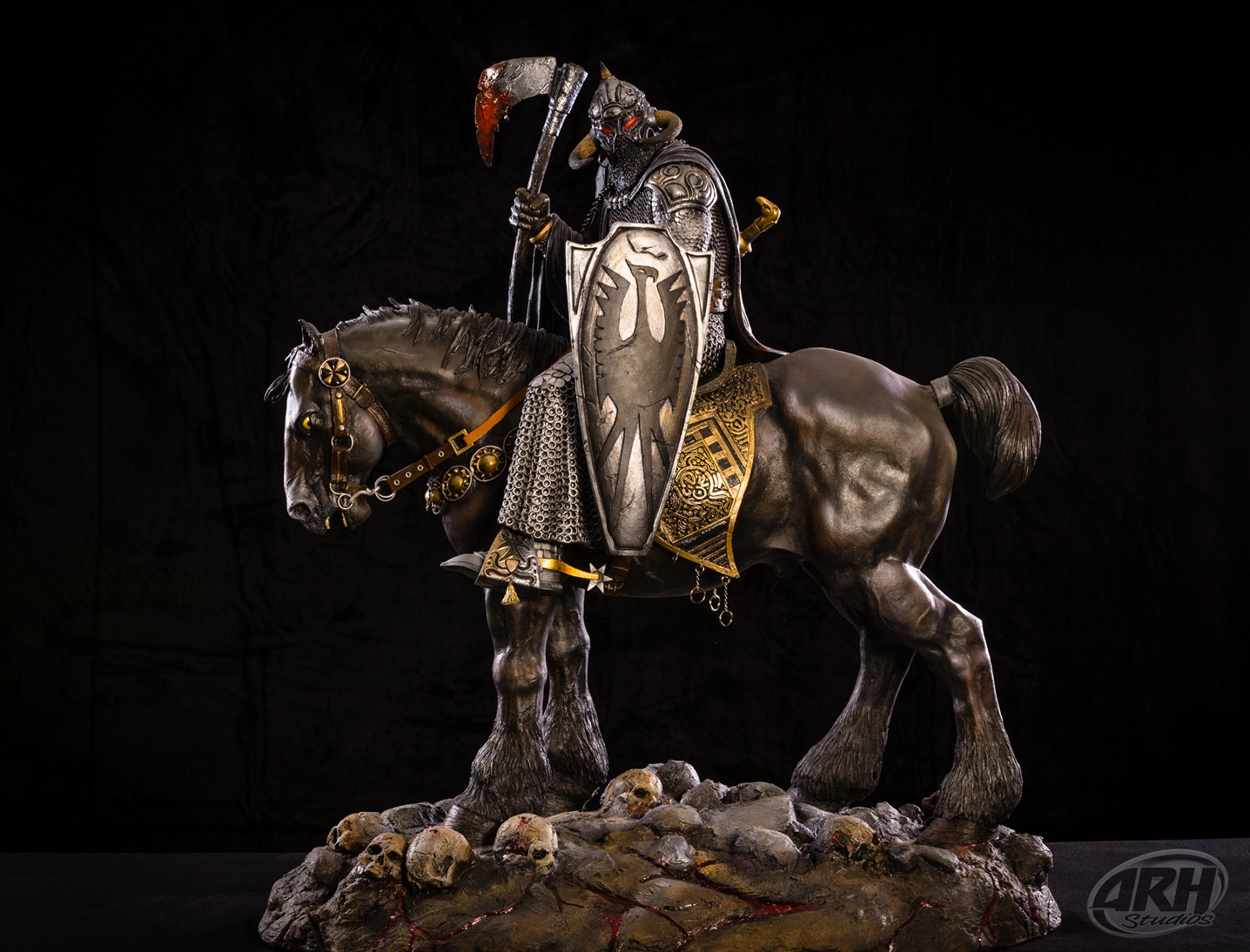 The Frazettas indeed figured out how to license the artist’s signature character. This is statue is by ARH Studios.

Ringgenberg: A lot of people just collected them for the covers.

Frazetta: That’s right. So, I’m not going to concern myself with all that. Hopefully, we’ll be getting some nice written material, for sure.

Ringgenberg: Are you going to deal with Ballantine again?

Ringgenberg: And what did they do? They commissioned a writer to write stories around this character?

Frazetta: No, he’s gotten this writer and that writer, and I’ve chucked a bunch of them out because I don’t think they understood what I’m looking for. It’s not that they can’t write; they’re very competent. This is unusual. This is difficult. It’s not a barbarian, it’s not a cowboy. What the hell… I myself hardly know what he is. I just created an image, a one-shot image, you know, my death symbol, on the battlefield, you know, and there he is sitting up on his black horse, and it’s gone, forever. And to suddenly get this guy and work him to death, presents a problem. But, I’m going to make him work.

If nothing else, you’ll own some damn nice pictures, I’ll say that.

Ringgenberg: Are you writing down story ideas, things that come to you when you work on the paintings?

Frazetta: Not really. I’m just visualizing this world that I’ve conceived of, and I just pick a scene, a moment, an action, and try and make it as fairly believable as I can. Those four paintings I have are pretty strange. Well, not that different, from the paintings in overall quality, but perhaps a little sinister, a little eerie you know, and they don’t tell you an awful lot. You just know that this guy is strange and he lives in an even stranger place… So, we hope that the writers can just create this world and work with me on this world.

I mean, what the hell, Burroughs created Pellucidar and places like that, why not? You know can get… You can’t take yourself all that seriously, it’s just entertainment, and I’m an artist… and for a change I learn from my mistakes, and instead of just being the asshole that gets paid a pittance to do the picture and they all get nice and fat and then deny your existence, that sort of stuff really hurts. Frazetta? He had nothing to do with Conan. I never had anything to do with anything.

Comic Book Creator #19 is due Feb. 27. You can get it at your local comics shop or directly through publisher TwoMorrows.