The Creeps Is Almost Creepy

Miss the old Warren books like Creepy and Eerie? Not a comic book, but an actual magazine format like the old classics? Well Rich Scala has created an incredible version of his own that harkens back to those great publications.

I asked Rich Scala about the challenges of putting The Creeps together:

The old Warren books had amazing writers and artist, some of the best in the history of sequential art, how do you find the next Jack Davis, Alex Toth or Wally Wood? 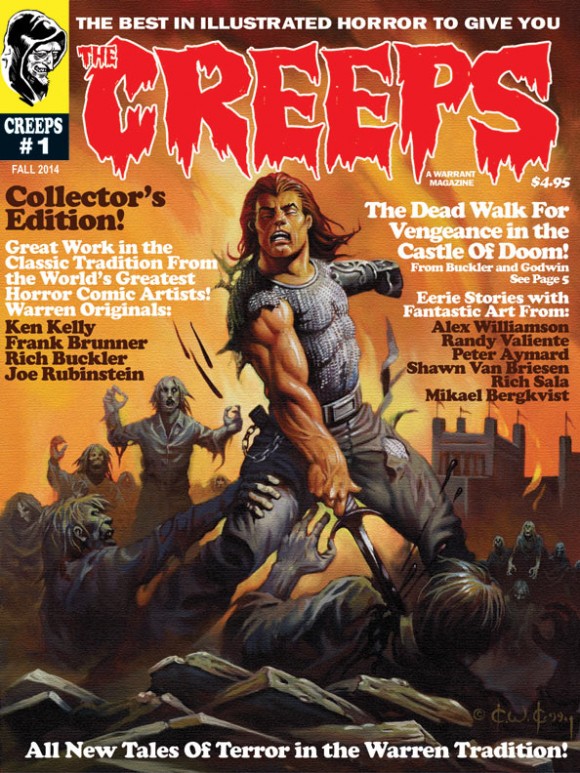 The true greats make themselves known over time through their body of work. We literally looked at samples from thousands of artist before deciding on our final line-up for the first issue of The Creeps. We wanted to incorporate some of the proven greats from the original Warren books, many of whom were still far from hitting their prime when they produced that work, and we also wanted to work with some younger rising stars who could create work in the spirit of the Warren classics. Not specifically a certain style, but artists who can convey a subtle horror mood effectively. I believe that the artists we’ve used are some of the best available for the genre, from both the past and present. We have Ken Kelly, Frank Brunner, Rich Buckler, Joe Rubinstein, Mikael Bergkvist, Alex Williamson, Peter Aymard and two artists who worked on some early editions of the Grimm Fairy Tales series, Randy Valiente and Shawn Van Briesen. I included one of my own stories, which I believe to be a good fit, as I’ve studied the genre for decades, but I may not be the most objective person on this issue (laughs). 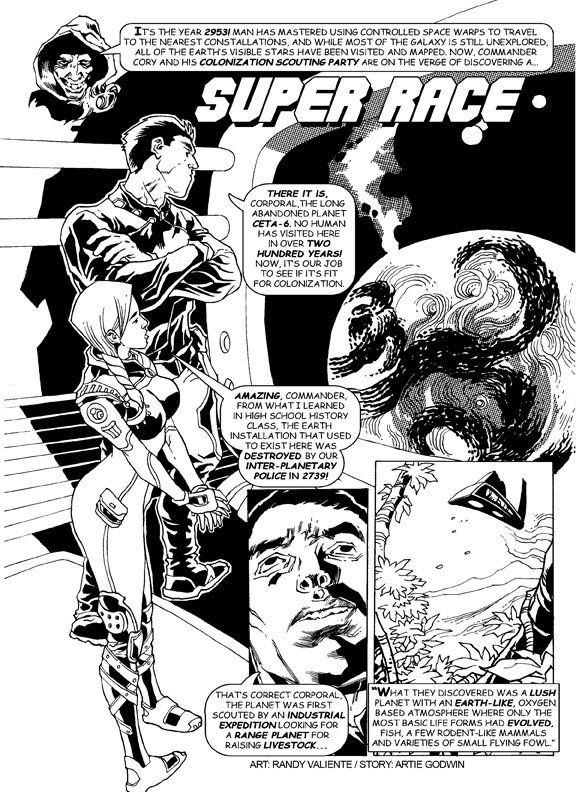 I see a lot of relaunches and re-issues of classics from the 60s; like the Ford Mustang and Chevy Camaro muscles cars, Planet of The Apes, and a ton of Batman ’66 product. Is a good idea just a good idea and it deserves to live on, or shouldn’t each generation have their own pop culture?

Though each generation will definitely add new elements, no generation creates a completely unique popular culture universe in any category, music, art, design etc. Each generation of artistic greats influences the next. Technological advancements have made gaining access to entire histories of work easy and simple. Artists are an inquisitive lot and I think many people might be surprised how many younger artists study the work of past masters, especially in art related fields. Of the thousands of artists we looked at while choosing our line-up for The Creeps, they nearly all sited the Warren books and artists as influences, and the majority of these creatives were in their 20’s and 30’s. Though there is a definite element of nostalgia for older fans in the re-issues you mentioned, a lot of interest is from younger consumers interested in their own history. A kid who becomes a huge fan of the most current Batman films, for example, is likely to seek out older versions from film and television and God know that finding this content is a breeze now, even for a child. A really great idea easily crosses generational boundaries. 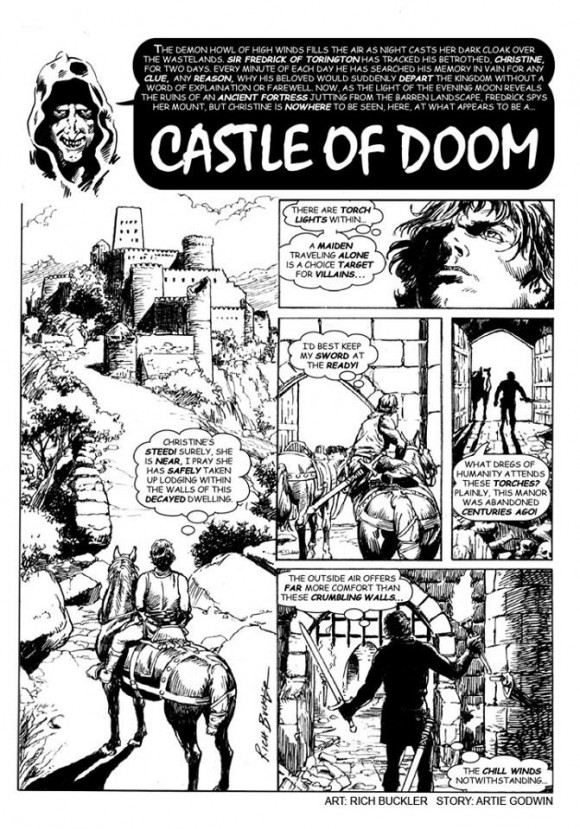 In looking at the previews, you’ve meticulously recreated the whole look of the old Warren books — right down to style of table of contents, the typography, everything is a perfect recreation of that familiar look. Are you using a similar paper? How far are you going to recreate the experience of reading an old Creepy Magazine?

I firmly believe that Warren got it right the first time. We’re doing everything we can to re-create the Warren experience including the size, paper stock, layouts and some of the original artists. There is nothing that can compare to those big, expansive magazine sized panels, and the dark shadowy effects of the black and white reproduction was perfect for the horror genre, and still is. Just as many great film-makers still use black and white film stock to achieve particular effects, the Warren books used black and white to it’s fullest advantage. Even when Warren ventured into the occasional color story, with a few exceptions, those stories pale when compared to most of the black and white work printed in those same issues. IMHO. 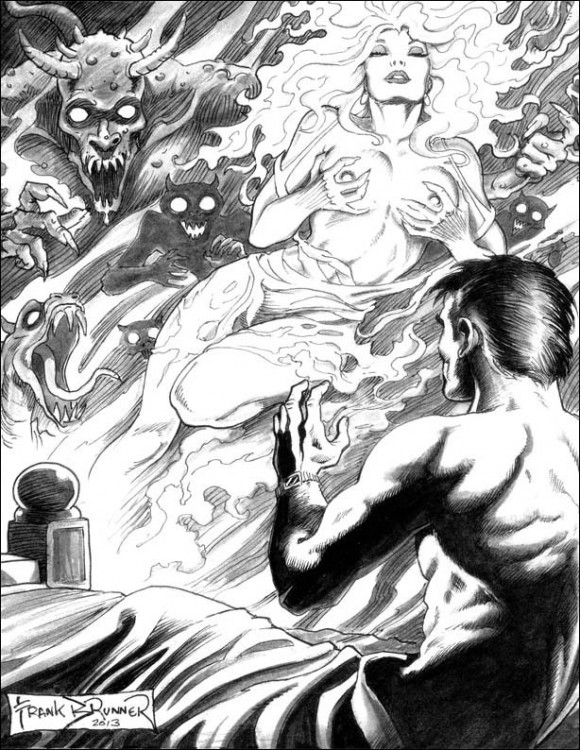 What are your plans for future issues? Is this like restoring an old car and once you’re done, that will be enough, or will this be an ongoing endeavor for you?

I plan to produce as many consecutive issues as I possibly can. I spent two solid years laying the groundwork for The Creeps, investigating the markets and laying out a solid business plan that encompasses many, many years. Print has been an industry in decline for over a decade and it takes a lot of shrewd operating to launch and maintain any project, but I believe that this is a concept and format that deserves to survive. We’ve been bombarded with submission requests since we started The Creeps, including from some of the old Warren talent, which tells me there is a real need on the creative end for a showcase of this type, in this genre. We’d like The Creeps to become a strong creative forum for freelancers and help contribute to the overall health and welfare of the creative elements of the industry 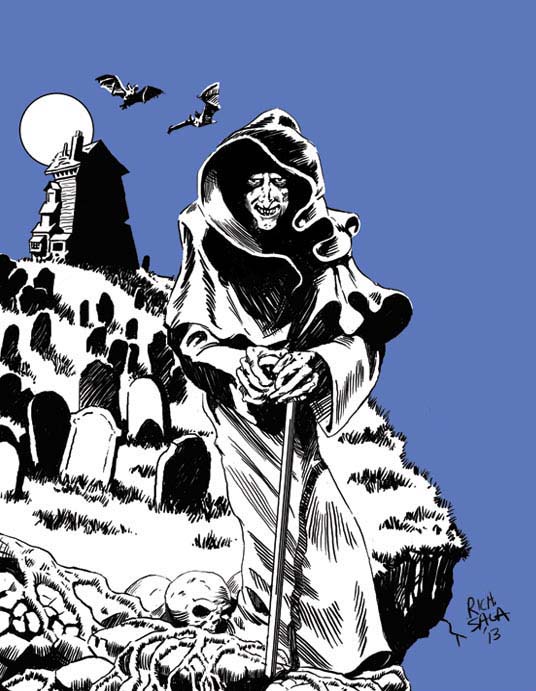 For the future: The release date of our First Collector’s Edition of The Creeps is July 15th, 2014, but copies can be pre-ordered NOW through our website at www.thecreepsmagazine.com. Also, we’re offering super-deep discounts to bulk buyers and sending free POP display posters with bulk orders. A number of retailers across the nation have already placed their bulk pre-orders, so we’re off to a pretty strong start. We declined to sign-up for the 2014 San Diego Comicon last years as our 2014 schedule was still way up in the air during the sign-up period, but we’ll be onboard in 2015, by hook-or-crook!