The Crazy Costumes of Kitty Pryde

Kitty is such a clotheshorse.

UPDATED 3/29/17: This column first ran in advance of X-Men: Days of Future Past but it’s remained a popular choice on the site ever since, so if you haven’t read it yet, enjoy. It’s timeless and hilarious. And if you have read it, by all means read it again. It’s worth it. Oh, and why am I publicizing it again now? Welp, Kitty Pryde is now leading the X-Men in X-Men Prime #1, out now. Seemed a good time. 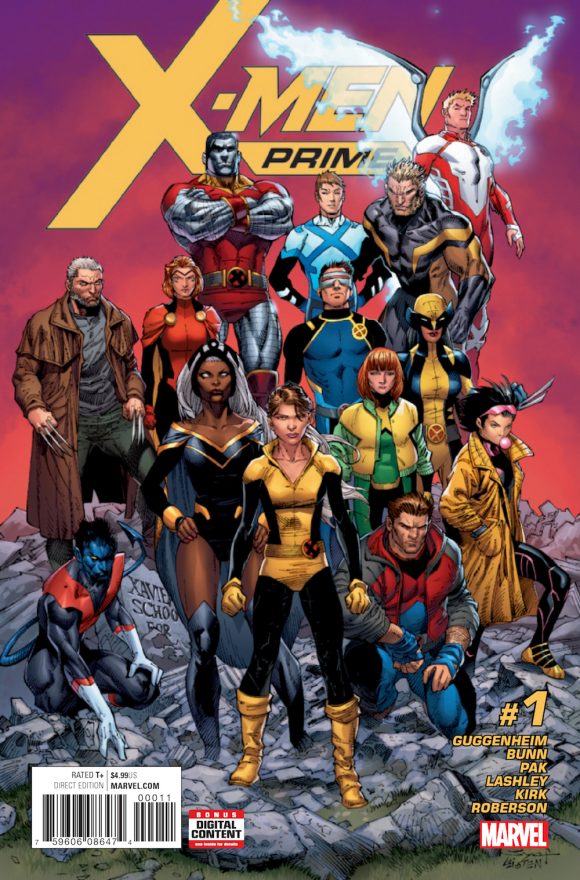 Poor Ellen Page. She’s reprising her role as everyone’s second-favorite X-Man in the new motion picture X-Men: Days of Future Past, but although Kitty Pryde was the time-traveling star of the original comic by Chris Claremont and John Byrne, in the movie she’s replaced by Wolverine. Shame on you, Wolverine!

Don’t you have enough starring roles in your 47 comic books every month? Well, at least Ms. Page can be comforted by her movie costume – fundamental, no-nonsense black – and she doesn’t have to wear any of those wacky costumes that artists have come up for her. Let’s take look in Shadowcat’s walk-through closet and browse through the Crazy Costumes of Kitty Pryde! 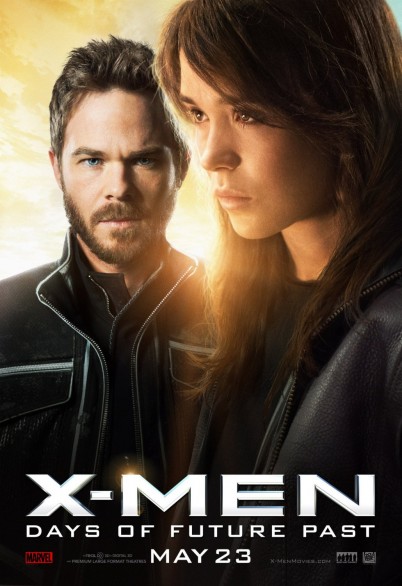 Kitty’s original costume was basic black (and yellow), the same design worn by the original X-Men before they graduated to individual costumes. It’s the same costume later worn by the New Mutants. Call it the Xavier School’s Freshman Fashion, call it camouflage for hiding out among sunflowers … call it anything as long as it distracts us from Kitty’s groan-worthy pun. It’s your first day as an X-Man, Kitty, don’t tick everybody off! 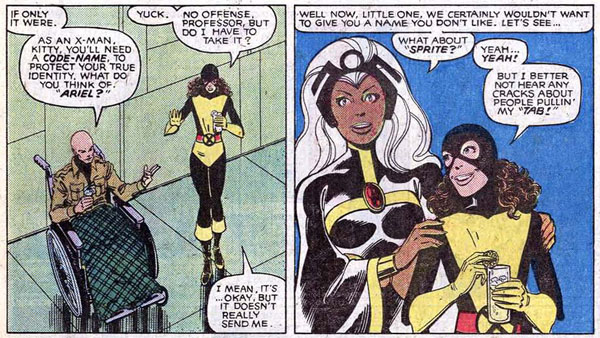 In the very first issue of X-Men, Jean Grey described that black-and-yellow costume as something that “could give Christian Dior a run for his money,” but Kitty has different, if not better, fashion taste, and kicks off a running gag of creating her own costume with quite possibly the worst design ever seen in comic books: the infamous Gold Disco Roller Skate Lightning Legwarmer Suit. In fairness to artist Dave Cockrum, he intentionally drew an eye-stabbing costume. Kitty’s only 13 1/2 and her idea of “snazzy” does not necessarily coincide with anyone else in the Marvel Universe. Even the Watcher had to look away from this one, and he’s wearing a space toga. 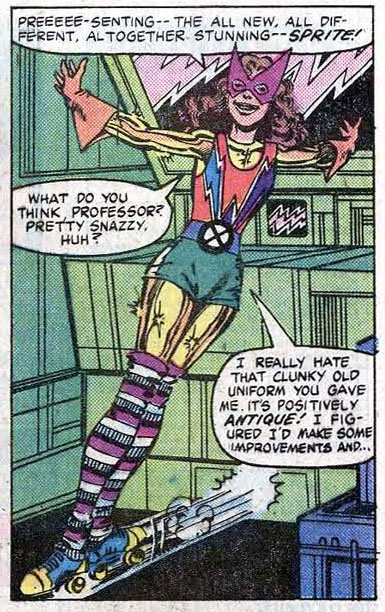 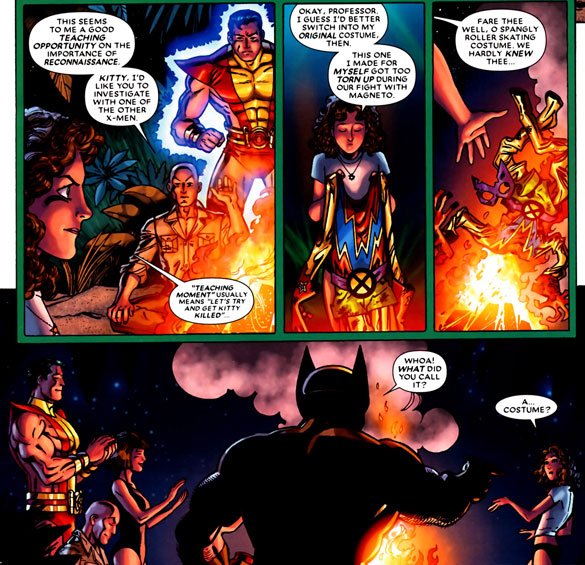 Her second attempt at creating her own costume met with the same reaction from the other X-Men, but at least shows her growing skill using Professor Xavier’s BeDazzler. 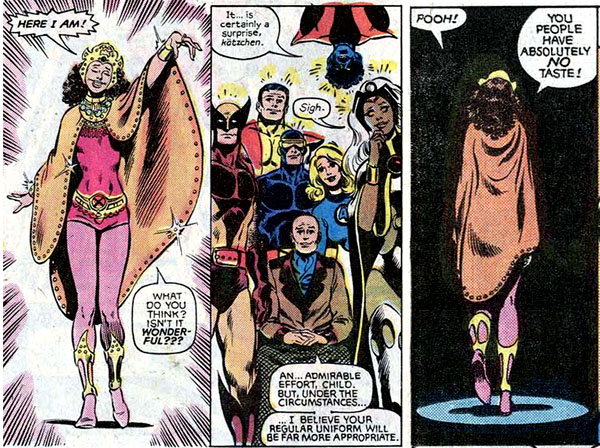 Even in those halcyon pre-Internet days, the fans made their displeasure over Kitty’s Costume Capers known and began submitting their own designs. Here’s a flamboyant little number that’s only one communicator away from being a Star Trek: The Motion Picture fleet uniform. Still, when threatened, Kitty could gore her enemies with her pointy, pointy mask. 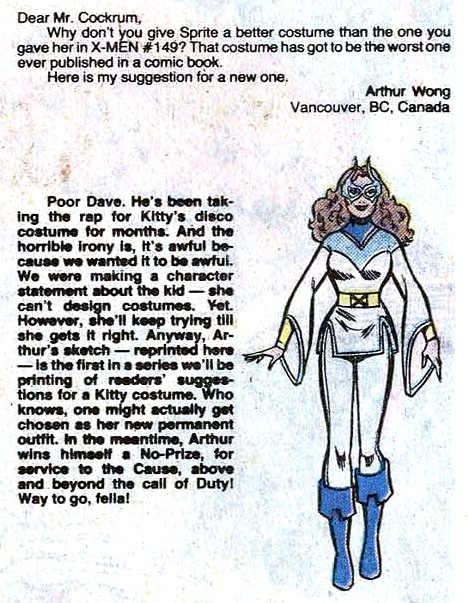 Here’s some more fan-designed costumes for Kitty. You know, these are pretty authentic. Yes, they look exactly like something Kitty would make. Very unfortunate acronym for this feature, though. 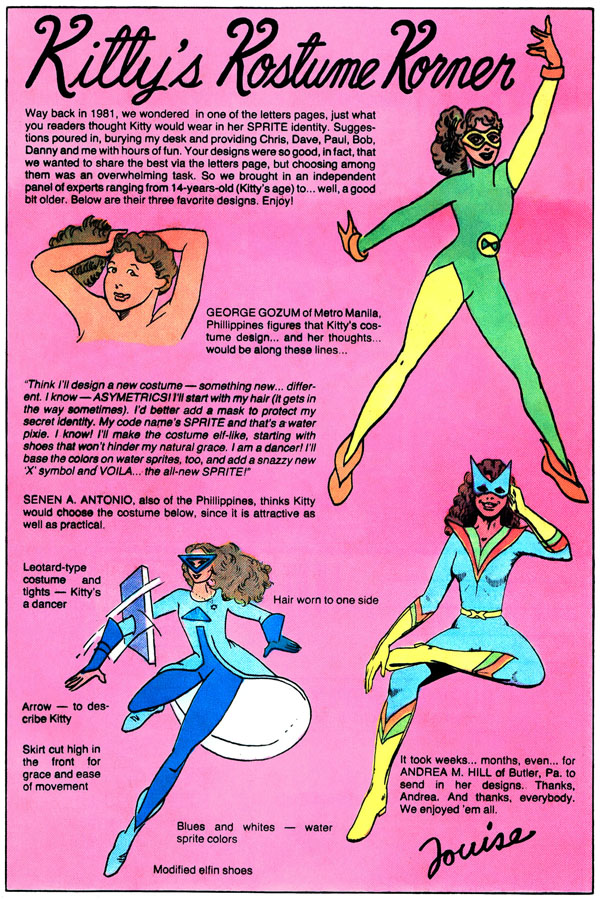 Even comics artist Art Adams got in on the fun. I normally click my tongue in disapproval at any costume that includes flowing sashes — because really, why give your enemy something to grab onto? — but to Kitty, that’s immaterial (literally). There’s something missing, though, from both of these designs. Maybe they just need a big belt with an “X” buckle. 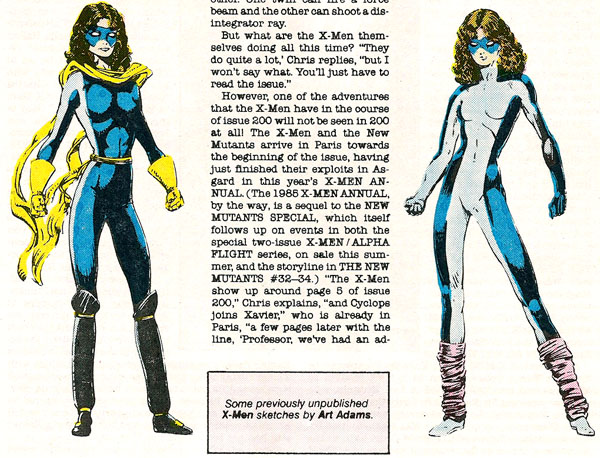 But it was during one of the X-Men’s adventures in outer space — remember when they used to rocket off to the Shi’ar Star empire at the drop of an unstable molecule hat, for Fourth of July weekend, or because Wolverine really liked that Space Beer? — that Kitty really went over the top on costume design. When imprisoned on a Shi’ar flagship with Nightcrawler, Ms. Pryde indulges her inner Isaac Mizrahi when she discovers an alien clothing making thingamabob. Her tastes in presto-chango outfits may be questionable, but she’s lucky that isn’t the same alien machine where Spider-Man got his new black costume from: the equivalent of a vending machine that spits out a killer alien symbiote for your two bits. Also pictured here: the Imperial Empire’s only 5’4″, 105-pound Sith Lord. 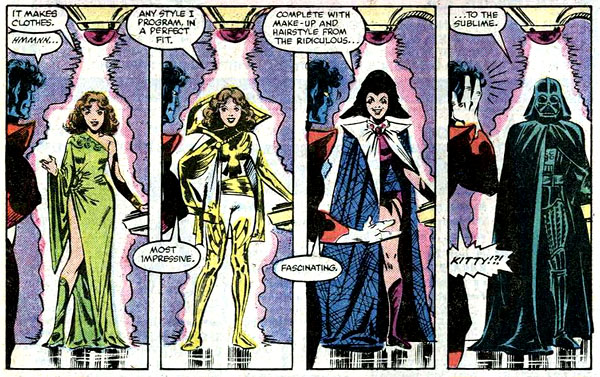 Over the next few issues, the clothing-making machine became a running gag. There’s something a little creepy, however, about a 14-year-old in a costume with exposed undercleavage, and your disturbing reaction ain’t helping things one bit, Nightcrawler. 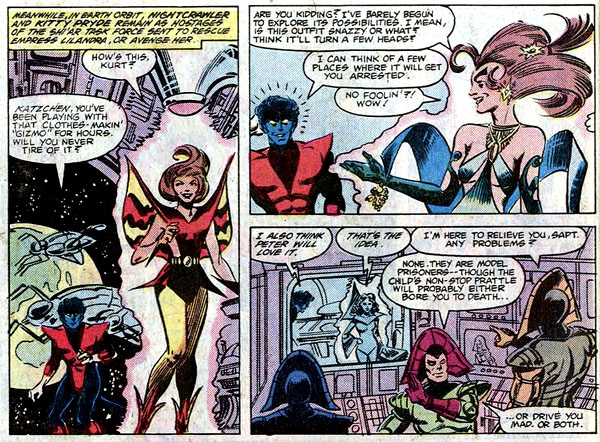 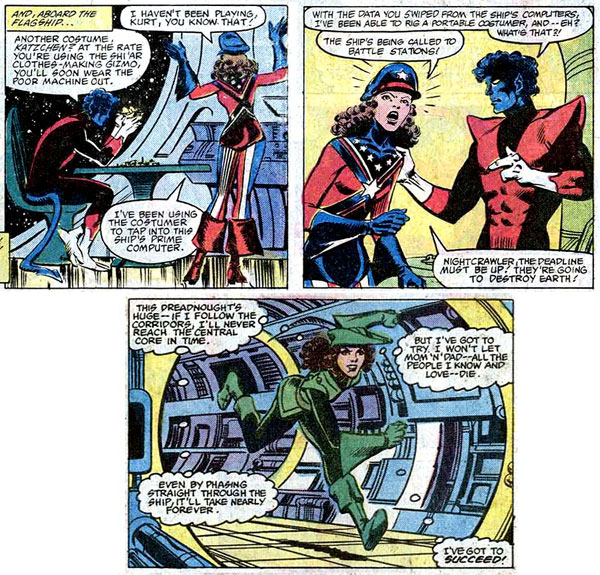 Thankfully, all this costume-changing had an eventual purpose to the plot: Kitty uses it to frighten the Shi’ar into believing that Dark Phoenix had returned. Worst Halloween trick or treat ever. I’ve got to hand it to Claremont, though, because I’d never have suspected that Kitty’s costumes would be the Chekhov’s Gun of an X-Men story. 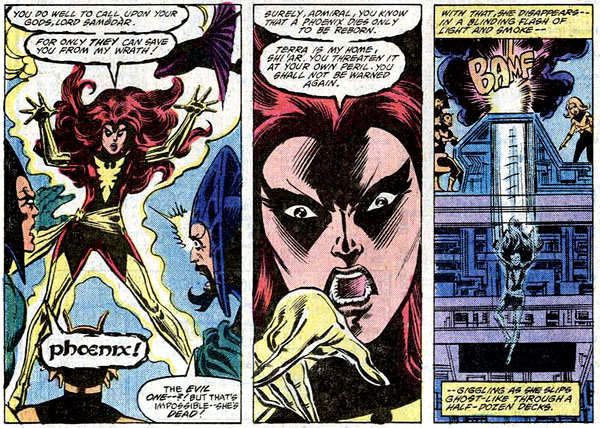 The Dress-Yourself Miracle-Machine makes a (non-continuity) appearance again in one of the many fantasy fairy tales the X-Men tell each other around the campfire during the mid-1980s. Here, at least, they’ve implanted the creative brain of comics artist Trina Robbins into the gizmo, leading to some at-least-artistic designs. She is probably not responsible for Wolverine’s “authentic” 1950s Indian vest, though. 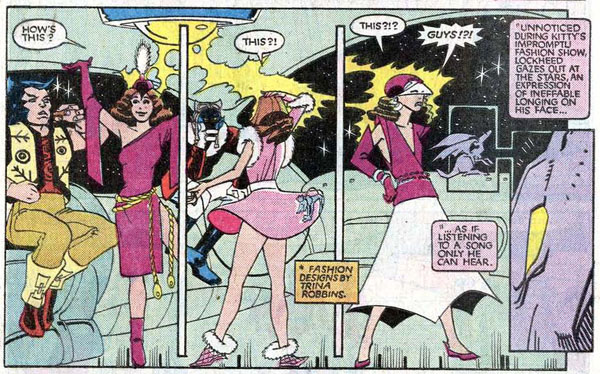 In fact, the X-Men’s fairy tale phase would bring us quite a few of Kitty’s more ridiculous costumes. Kitty’s 14-year-old inclination to over-accessorize (really? Pirate boots and a floppy hat?) tips them into the realm of the ridiculous. She needs to remember Marilu Henner’s point system from the movie L.A. Story: “Right before you go out, look in the mirror and turn around real fast, and the first thing that catches your eye, get rid of it.” In Kitty’s case, the entire outfit. Back in the realm of the real — well, as real as a superhero team with a weather goddess and a guy who changes to steel is — Kitty Pryde finally gets some updated costumes that don’t make her a target for the Punisher even on a completely moonless night, along with an updated codename of “Ariel.” This green-and-yellow outfit was short lived. I’m pretty sure it only appeared in one X-Men graphic novel and her first Official Handbook of the Marvel Universe entry, but it’s a pleasing, simple design that plays up her affection for Danskins as well as her Dazzler fandom. I’ve always wondered, though, why she doesn’t she just walk straight through that green makeup. Here’s another dance-inspired number, complete with Flashdance-era headband and a large paper plate around her neck. 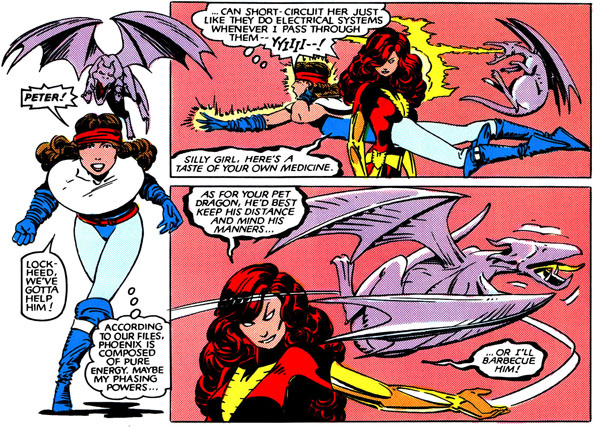 But take notice of this retro design (if going back 18 months can be considered retro). Brent Anderson’s redesign of Kitty’s first costume gave her a short-lived mask with an “X” on the forehead (not seen here) but the simple addition of pointy flared shoulders is a nice touch and accentuates her elfin “Sprite/Ariel” appearance. Remember this one, folks: We’ll be coming back to it later. Geez, Kitty, what did I tell you about sashes? Her first costume under her new (and so far permanent) codename of “Shadowcat” mixes a dark blue jacket and pale blue tights…

from Kitty Pryde and Wolverine #5 (1985), script by Chris Claremont, art by Al Milgrom

…which evolves into one of Kitty’s longer-lived and more popular costumes for her years hanging around a lighthouse with Captain Britain in Excalibur. Substitute a mask for the lavender eye make-up, and I do believe our teenager is growing up as far as her fashion sense is concerned. They do grow up so fast, don’t they? Or, in the Marvel Universe, so slowly. 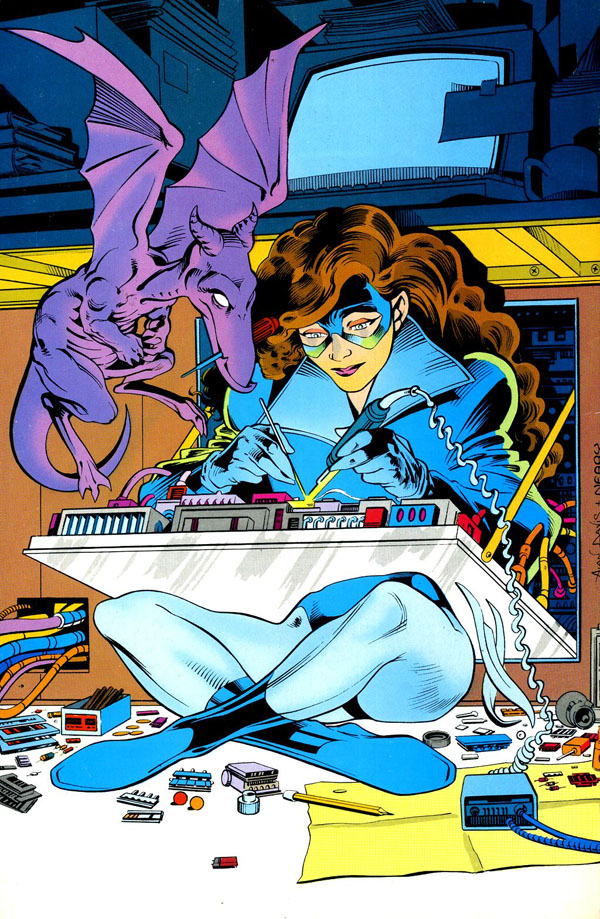 Kitty was less visible during the late ’90s, replaced as Wolvie’s kid-sidekick by Jubilee (and the less on her fashion sense, the better), so when the new millennium rolls around and the X-Men redesign their uniforms, it’s probably no surprise that Kitty goes all-out glitter-ball. Oooh, shiny! And Wolverine-y. But stop popping your collar, Kitty; that’s so ’90s. 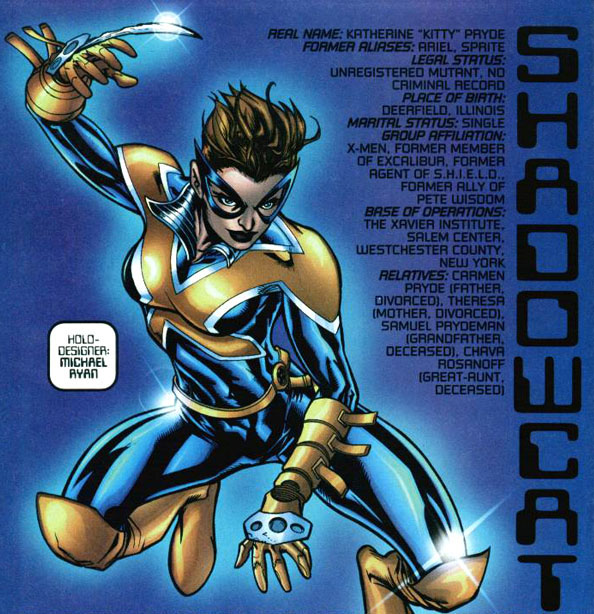 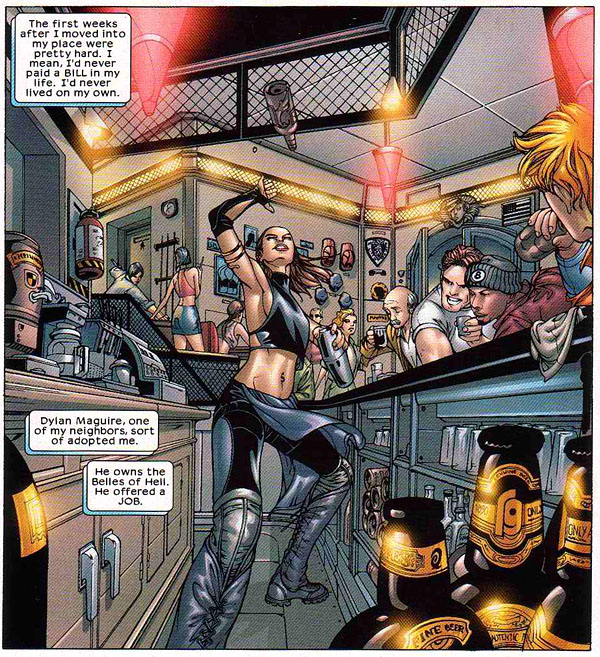 from Mekanix #1 (2002), script by Chris Claremont, art by Juan Bobillo and Marcelo Sosa

What started as a sexy, skintight, belly-baring outfit for her job as a bartender — geez, she made the leap from 15 to 21 really fast, didn’t she? — eventually became an official costume. Katherine Pryde, you pull up your pants right now! 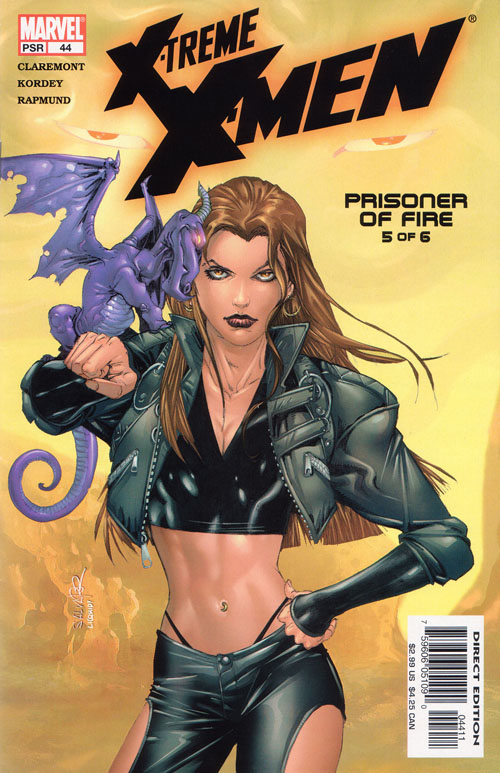 In more recent years Kitty not only returned to a full-time position with the X-Men but to a relatively flattering and not-at-all silly costume. Note the flared shoulders: this is basically the same design as Brent Anderson’s 1981 tweak on her original uniform! At last, Kitty has learned the importance of keeping your uniform design simple and clean, and that the only accessory you need is a miniature purple dragon. With the addition of a v-neck, this design has remained Kitty’s uniform to the modern day. Also: hair-straightening products have done her a world of good. From black-and-yellow to black-and-yellow with lavender, pink, lime green and jaunty hats along the way, that’s the abbreviated history of Kitty Pryde’s Crazy Costumes. Ellen Page oughta be grateful she didn’t need to suit up in any of them.

I didn’t even have time to cover some of the many other C.C.s of K.P., like her alternate-universe selves from the Age of Apocalypse, Ultimate Universe, X-Men: Evolution, or even Kitty Pryde, Agent of S.H.I.E.L.D…. 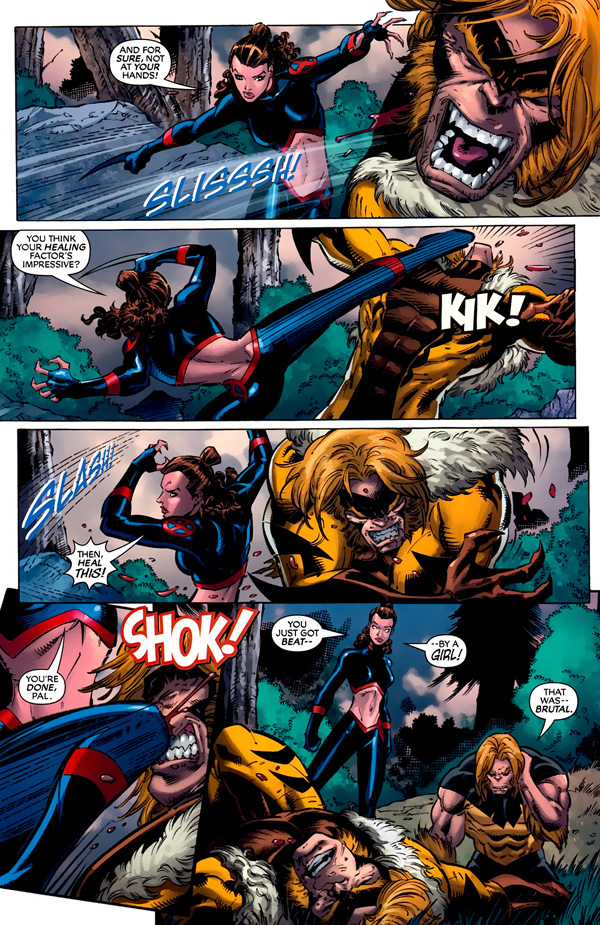 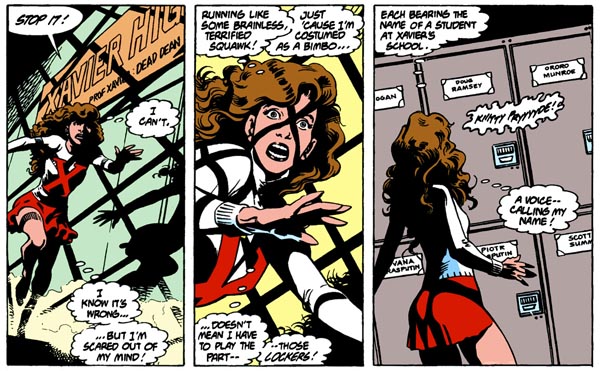 from Excalibur #7 (1989), script by Chris Claremont, art by Alan Davis and Paul Neary …much less the Kitty Pryde of an alternate future who merged with a Sentinel. from Excalibur #2 (1988), script by Chris Claremont, art by Alan Davis and Paul Neary

Kitty Pryde: She’s cute, fans like her, and she’s got, after the Wasp, the second-biggest wardrobe in the Marvel Universe.