UPDATED 7/4/21: Hey, baby, it’s the Fourth of July! What better time to revisit this piece from 2016’s CAPTAIN AMERICA WEEK? Oh, and for a new 13 COVERS gallery starring Cap, click here! Be safe, everyone! — Dan

We all know the backstory of Marvel’s Sentinel of Liberty, Captain America—with a revolver his hand, he mows down bad guys at night, while during the day he is crusading D.A. Grant Gardner, assisted by his love interest/sidekick/secretary Gail Richards. A mysterious figure, Captain Ame—wait, what?

No, I have not taken leave of my (spider) senses. The Cap I am referring to is from the 1944 Republic Pictures movie serial Captain America, the first time any Marvel (then called Timely) Comics character was portrayed in live action! Across its 15 chapters of stunts, and thrills, Captain America (Dick Purcell) is on the trail of a supervillain named the Scarab (the great Lionel Atwill). 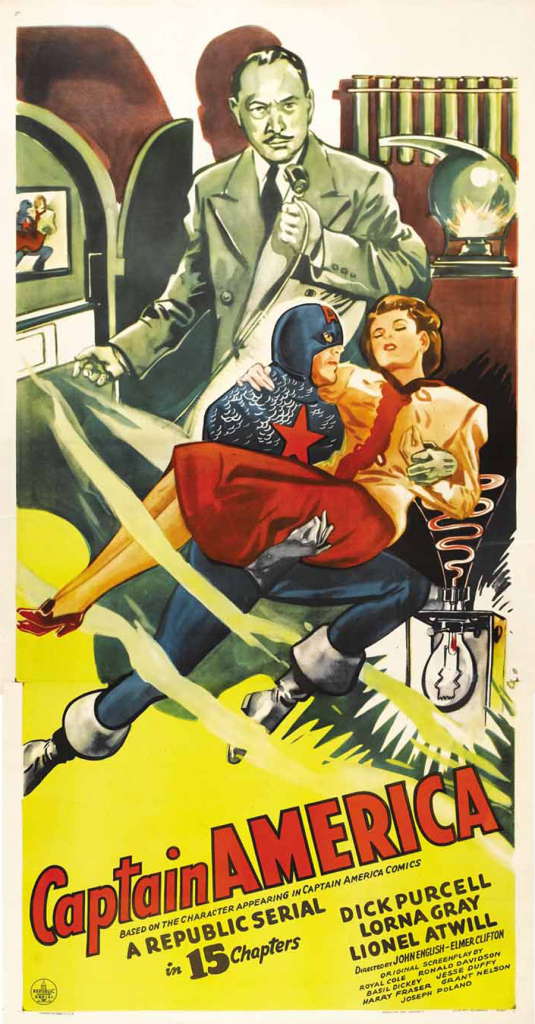 There’s been a series of suicides among scientists and businessmen and the city’s mayor puts the police commissioner and D.A. Gardner on the case. Before long they discover the Purple Death, a hypnotic chemical responsible for the deaths—a tool of the Scarab!

The Scarab’s true identity, revealed early on in the serial (unusual for comic book-style serials, which tended to try and keep an air of mystery around the bad guy), is a Dr. Maldor. Maldor was part of an expedition to Mayan ruins, but ended up with the short end of the scarab when everyone got back, watching his partners claim the fame and fortune from the resulting trip. 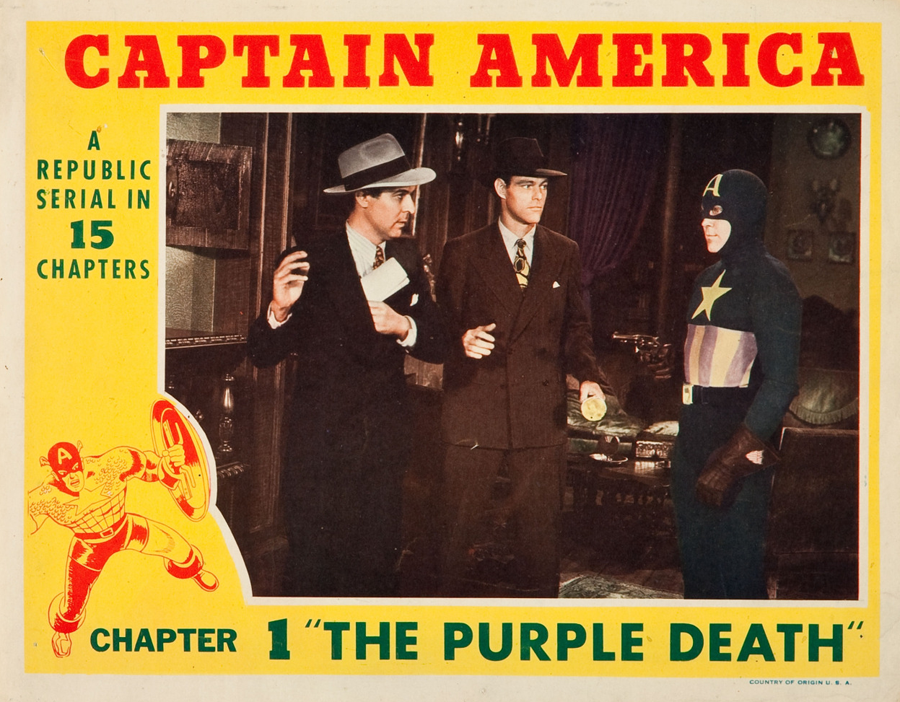 Why Republic diverged so drastically from the source material—seemingly for no good reason—is mostly lost to the ages. There’s no mention of Cap’s origin, his special powers, no shield, no Bucky, and (most oddly), no Nazis, even though Lionel Atwill could have pulled that off in his sleep.

It seems pretty clear that Republic grafted together a couple of other movie serial scripts — a little Batman here, some Adventures of Captain Marvel there — and then shoehorned Cap into it. Not that any kids watching this week to week ever would have noticed — Captain America, despite its flaws, delivers lots of slam-bang action and that’s of course what you wanted.

Dick Purcell looks a little paunchy for a super soldier, and the costume does him no favors (though the shield-shaped belt buckle is pretty sweet). But the various fight scenes are well staged and pretty exciting—that is, when Cap isn’t just shooting the bad guys down with his revolver, or pitching them off a cliff, like he does in Chapter 6 (“Vault of Vengeance”). 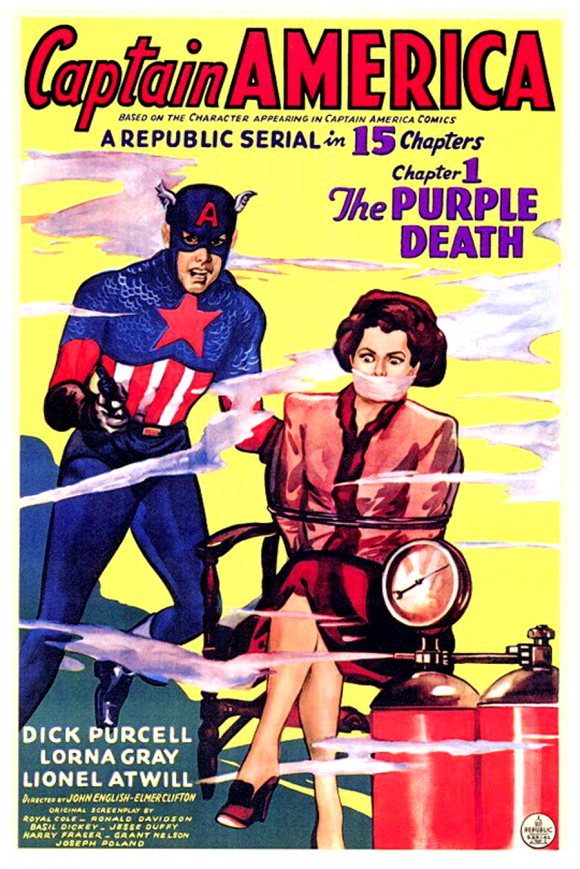 During one sequence, his secretary Gail (Lorna Gray) is strapped into a guillotine, as a ticking clock counts down the moments until we have two Gails. As Cap tries to fight off one of the Scarab’s henchmen, the soundtrack drops out all of the sound effects except the ticking clock — a nice, artsy little effect. Cap, of course, rescues Gail in time, but she does come within a few inches from certain death, which probably shaved at least a few years off her life.

The final fight scene between Cap and the Scarab is a pip, as the two actors/stunt men throw each other around the set, smashing everything in the process. I guess the director shot the serial in sequence, and figured what the hell, boys, we won’t need this stuff anymore, let it rip! 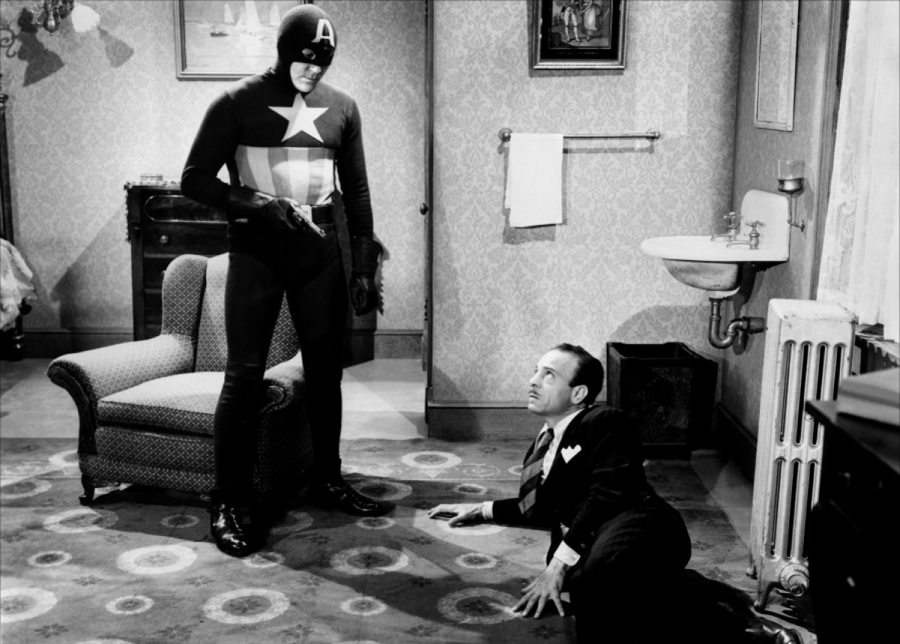 Admittedly, there is way, way too much of Purcell as Gardner, and he gets at least just as many action scenes as Captain America does. In Chapter 12 (“Horror on the Highway”), he and another Scarab minion have a shootout in a room so small they can practically just reach out and grab each other’s gat. When Gardner runs out of bullets, he throws the gun at the bad guy, a classic move.

There’s a whole lot of time wasted on tricking the Scarab by using a phony name, which turns out just to be Dr. Maldor spelled backwards (reminiscent of one my favorite—and goofiest—Batman plot turns of all time). 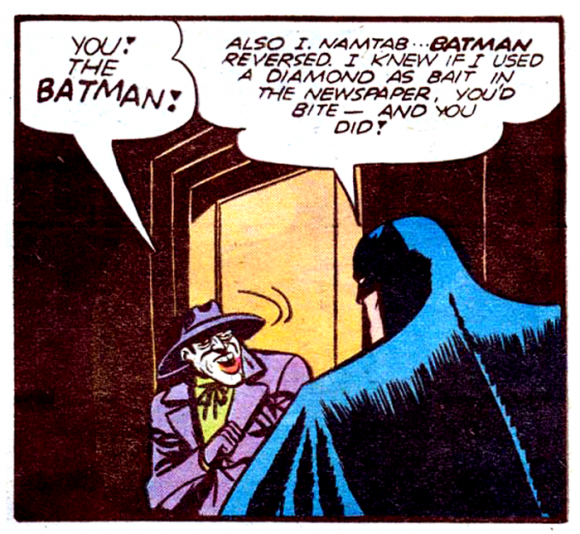 The final chapter, “The Toll of Doom” is aptly named, since it ends with the Scarab being captured and scheduled for execution. This entertainment aimed at children ends with Gardner (who everyone now knows is Captain America), Gail, the police commissioner and the mayor looking out the window and making jokes as the clock strikes midnight—the exact moment the Scarab is being executed! Hey kids, stay in school!

Captain America would be reissued in 1953 as The Return of Captain America (which is odd but somewhat appropriate, since Cap is already an established hero as the story begins). Amazingly, there would not be another Marvel character seen on movie screens for four decades, until 1986’s Howard The Duck (upon seeing that film, I’m guessing Marvel longed for the good ol’ days of D.A. Grant Gardner). 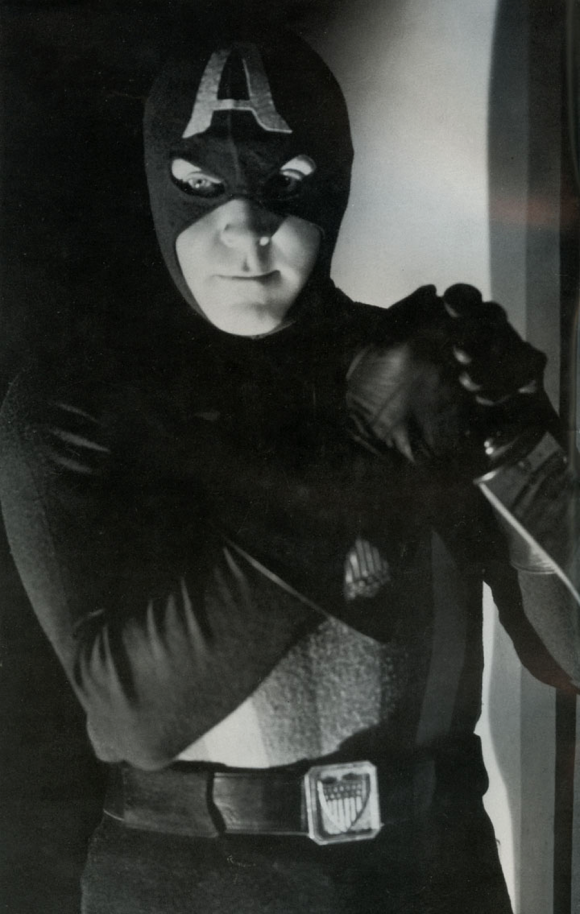 The whole bad-guy-using-mind-control was used for another Marvel live-action production, the 1977 pilot for Spider-Man. And, of course, there were a few live-action Captain America specials around that same time.

Author Don Glut (who knows a thing or three about movie serials) wrote a stretch of the Captain America series in the 1970s, and in one storyline he cheekily had Cap get involved with a movie being made about his adventures, and he was none too certain about his gun-wielding doppelganger. I’m betting, like the rest of us, he’s just fine with Chris Evans!

Rob Kelly is a writer/artist/comics and film historian. He is the co-host of The Fire and Water Podcast (and the host of its sister show, The Film and Water Podcast), the co-creator and writer of the award-winning webcomic Ace Kilroy, and the creator of the book Hey Kids, Comics!: True-Life Tales From the Spinner Rack. He is #TeamCap. (So is his editor.)