This is no fantasy — this is a gorgeous custom… 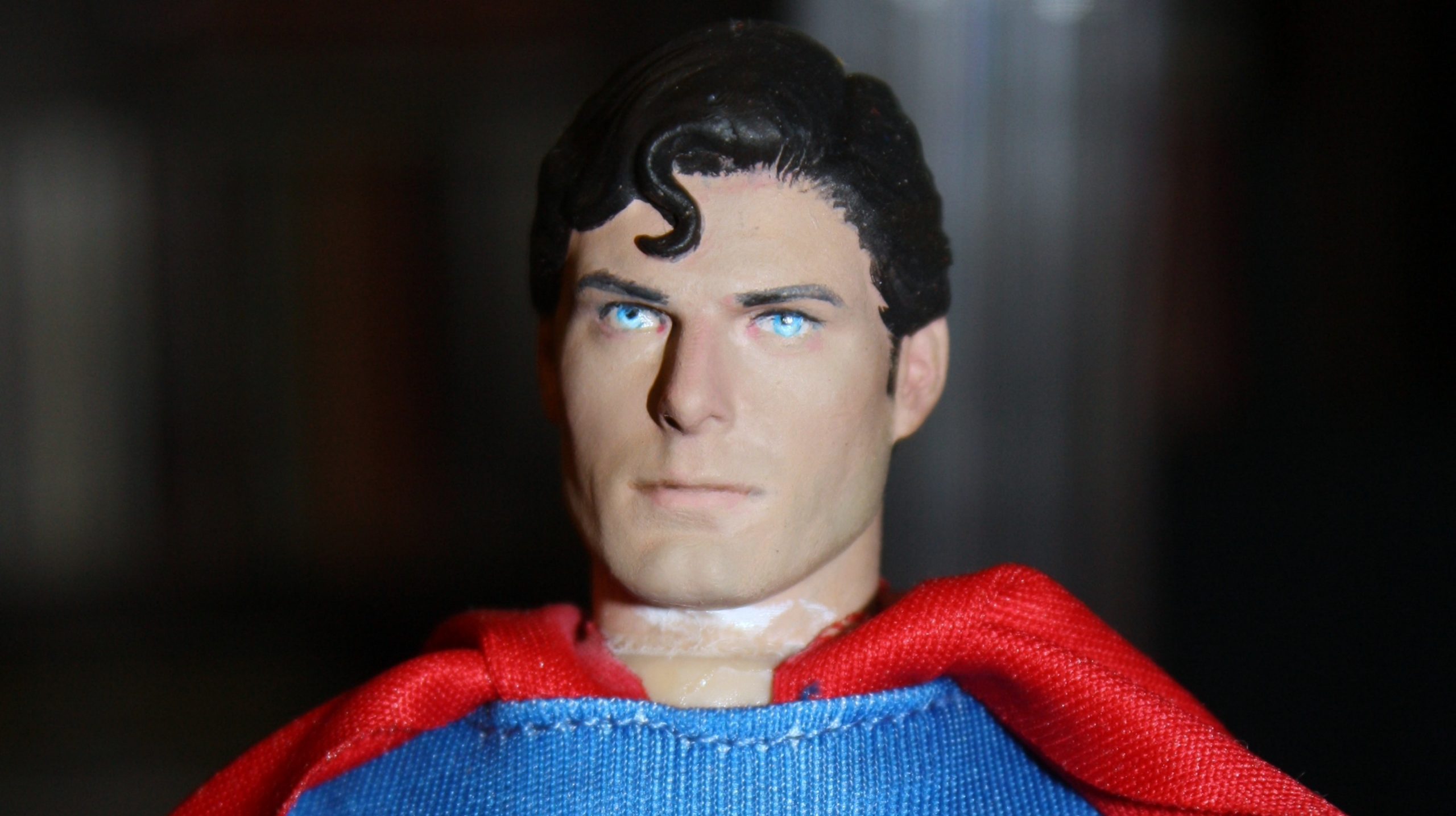 When it comes down to it, my favorite Superman in any medium is Christopher Reeve’s portrayal. Hands down. Easy choice.

And when it comes down to it, my favorite action figures are Megos (or Mego-like, 8-inch figures). Also hands down. Also an easy choice.

So my mind was blown apart like the planet Krypton when I saw this spectacular Reeve Superman custom Mego on Facebook the other night — owned by collector Tom Ryan: 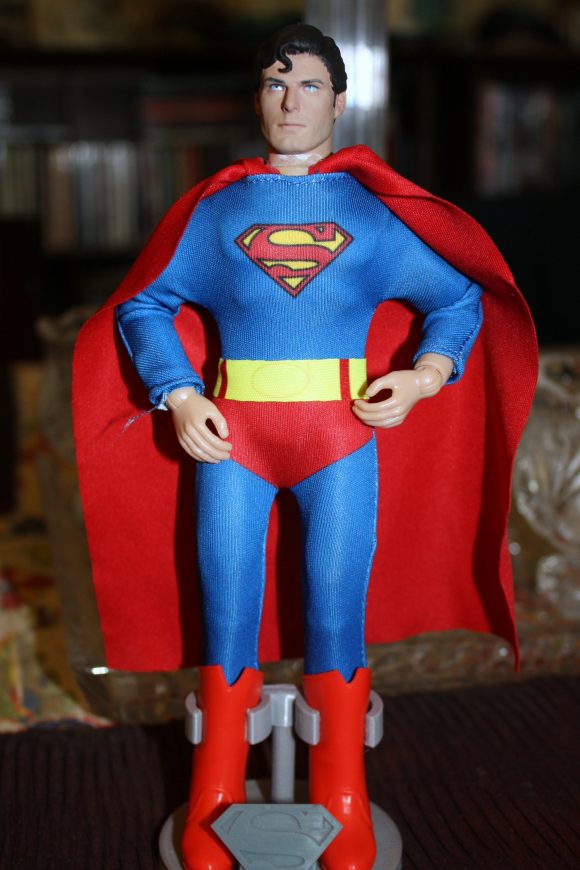 The white on the neck is residue from glue Tom put there.

So how did it come about? Ryan has a wonderfully warm story to tell about the greatest Man of Steel:

“Back in 1996 I worked in lower Fairfield County, Connecticut, with The Maritime Aquarium,” Ryan said. “I was the marketing Assistant and part of my job was welcoming VIP/celebrity visitors. One day Christopher Reeve and his wife and three kids came in to visit. I spent the afternoon with them. Chris and his wife came back with their son Will for a couple of visits and Dana came back solo. Since Chris needed extra care getting around, I would spend each visit with them and got to know him very well. 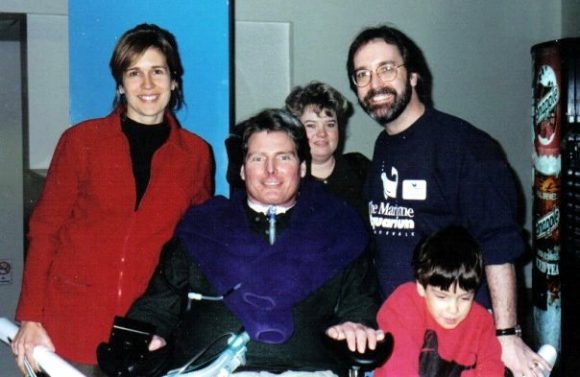 Ryan (right) with the Reeve family

“When he could no longer use his breath only to power his wheelchair, he would tell me he needed to ‘power up’ and we would find a corner to take him to and literally plug his generator into the wall. My job was to try and keep the public at bay,” he added. “I had great conversations and interactions with Chris and his family and I ALWAYS believed he would walk again. He had such inner strength.
I was devastated at his passing. And later at his wife’s.”

Years later, the wheels started turning for a custom Mego.

“I had always been a fan of Superman comics and Chris’ movies. I always wanted a figure that REALLY looked like Chris but the closest I got was the Hot Toys one — which is WAY outside my budget,” Ryan said. So he tracked down a couple of skillful hobbyists who helped him out by creating a custom head that would fit a Mego Type 2 body. 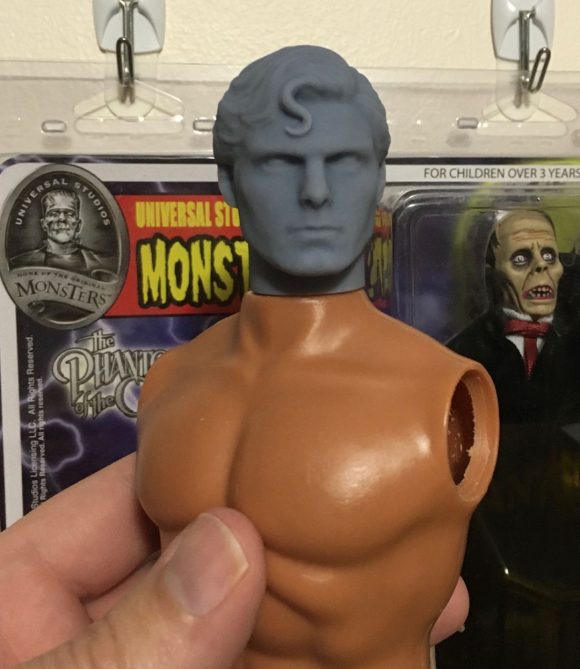 The result? An uncanny likeness of the actor who made us believe a man can fly.

“I had a Superman Mego that I had changed into Clark Kent. So I had an extra costume,” Ryan said. “And now I have my tribute to Chris and he is displayed right next to the photo that his wife gave me of the two of them.” 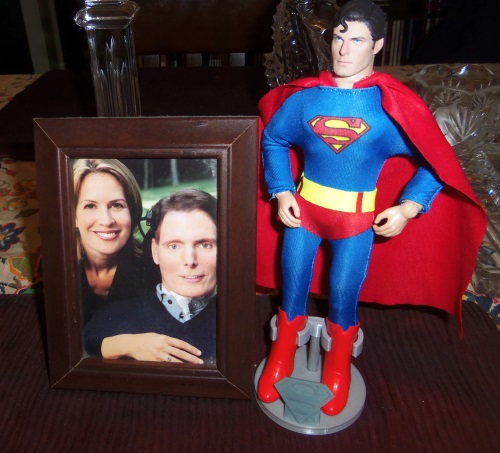 Superman’s costume is obviously not screen-accurate; it’s the one produced by the modern Mego Corp. But it’s pretty dang close and frankly, being somewhat off-model is a beloved Mego tradition.

To me, this is as perfect as Reeve’s performance and it’d be far out if Mego or another company could make these for a mass market.