THE BRAVE AND THE BOLD: What JIM APARO Thought of BATMAN’s Many Guest Stars

Home » BATMAN'S HOT-LINE » THE BRAVE AND THE BOLD: What JIM APARO Thought of BATMAN’s Many Guest Stars

From Green Arrow to the Metal Men — and MORE… 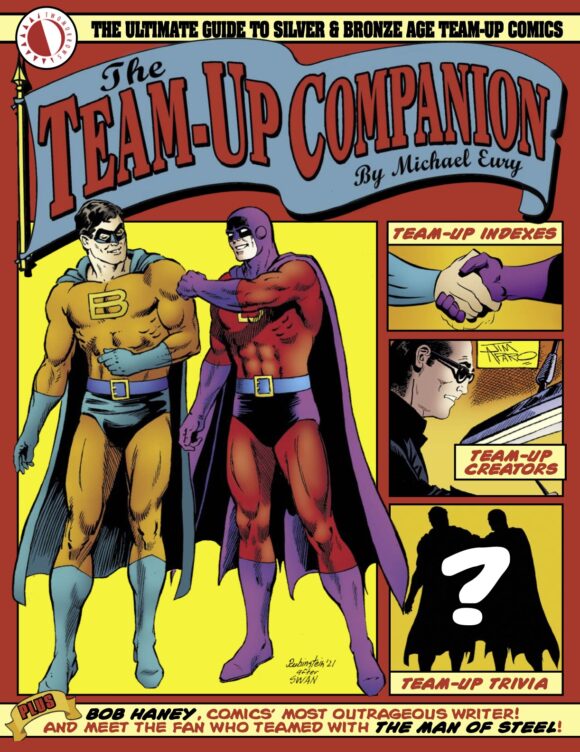 One of the coolest comics history books to come out this year is TwoMorrows’ The Team-Up Companion, by Michael Eury, which is, as its name suggests, a thorough exploration of team-up comics across the decades.

The 256-page, full-color trade paperback is due for release Sept. 14 and I gotta tell ya, this thing is jammed. 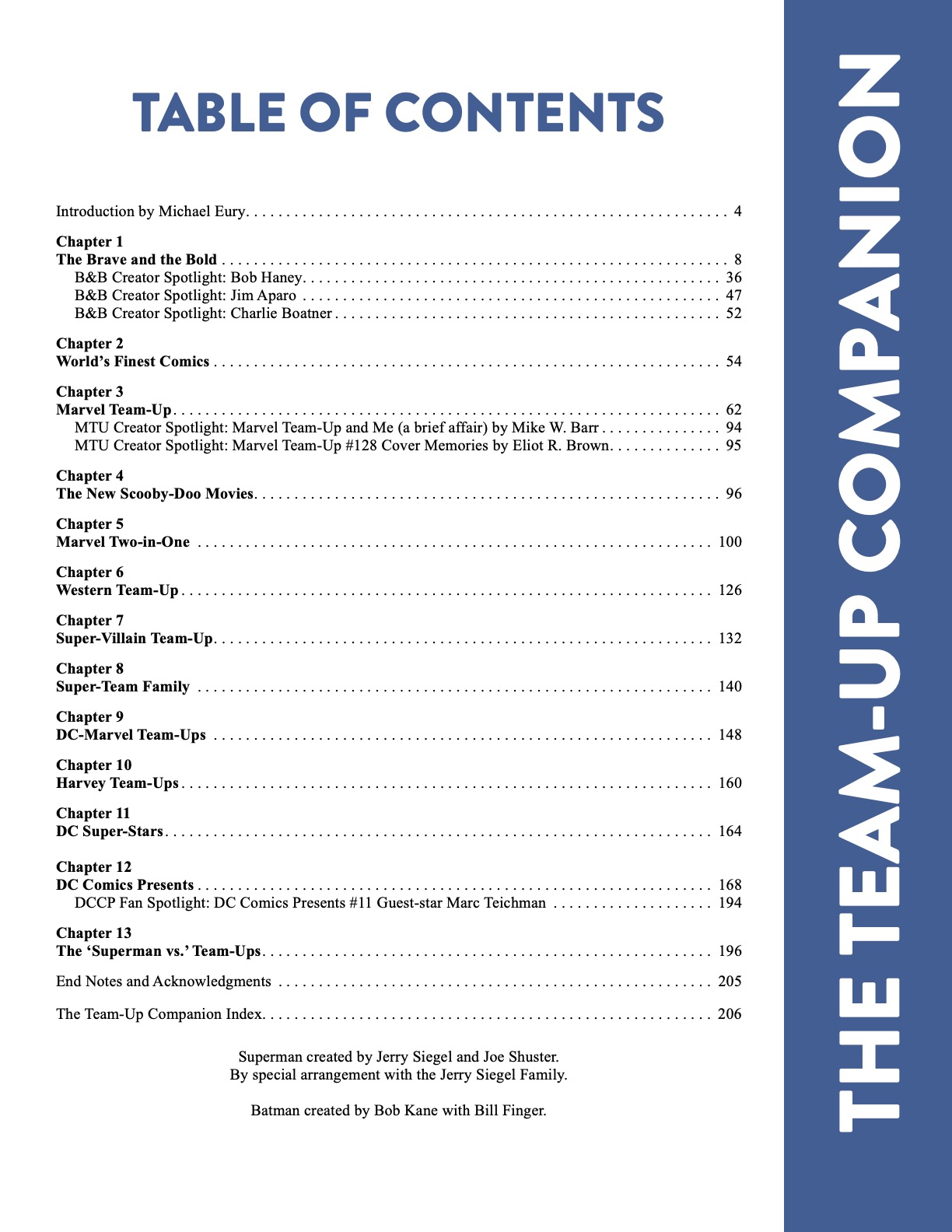 It’s a hard book to put down (as if you’d want to) and we’ve got a tiny sliver to share with you as an EXCLUSIVE EXCERPT.

I chose a piece from Eury’s interview with the late Jim Aparo from back in 2004 that ran in somewhat different form in Back Issue #7. Here, Aparo discusses the various guest stars who popped up to work with Batman during the artist’s lengthy run on The Brave and the Bold in the Bronze Age.

But wait, there’s more! Click here for Eury’s own picks for the TOP 13 TEAM-UP ISSUES OF THE SILVER AND BRONZE AGES. (And click here for 13 GREAT BATMAN TEAM-UPS THAT NEVER WERE.)

Michael Eury: Let’s discuss your recollections of some of the characters you drew in Brave and Bold. What about Green Arrow?

Jim Aparo: He was a very frequent guest-star. I liked drawing him, the new version of him. I’ve got (a Green Arrow drawing) tacked on the wall over here. He looked better with the beard than he did before.

Eury: Were you aware that it was actually in The Brave and the Bold that Green Arrow was updated? In one of the issues that Neal Adams did (#85), a year or two before you came on to the book?

Aparo: I remember that now, now that you bring that up. 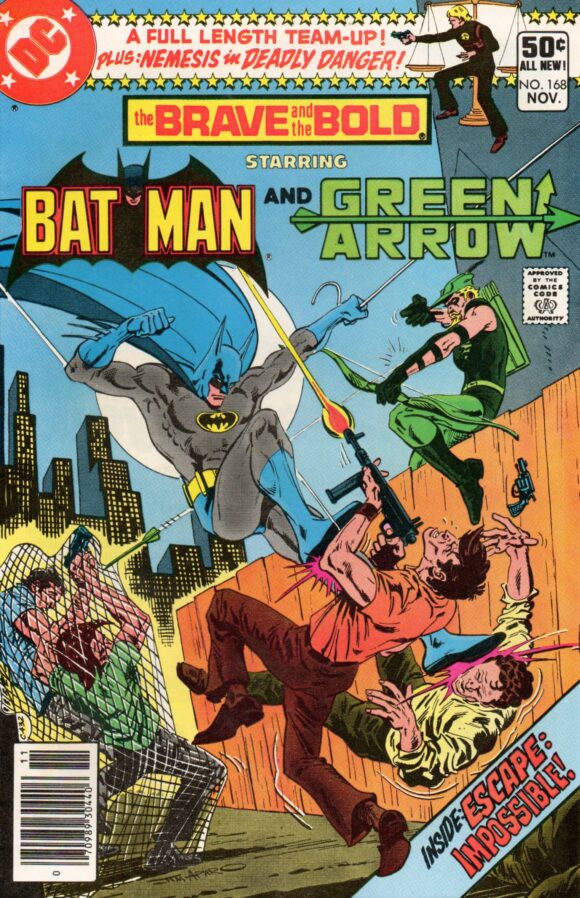 Eury: What about Deadman?

Aparo: Deadman… he’s standing there, people are walking by him, they don’t see him. That was quite a character, fun to draw.

Eury: How about the Metal Men?

Aparo: They were quite a problem. Yeah, they were tough to do, since they kept changing shape, but I enjoyed them.

Eury: You had a knack for drawing beautiful women. Your Wonder Woman is fondly remembered. 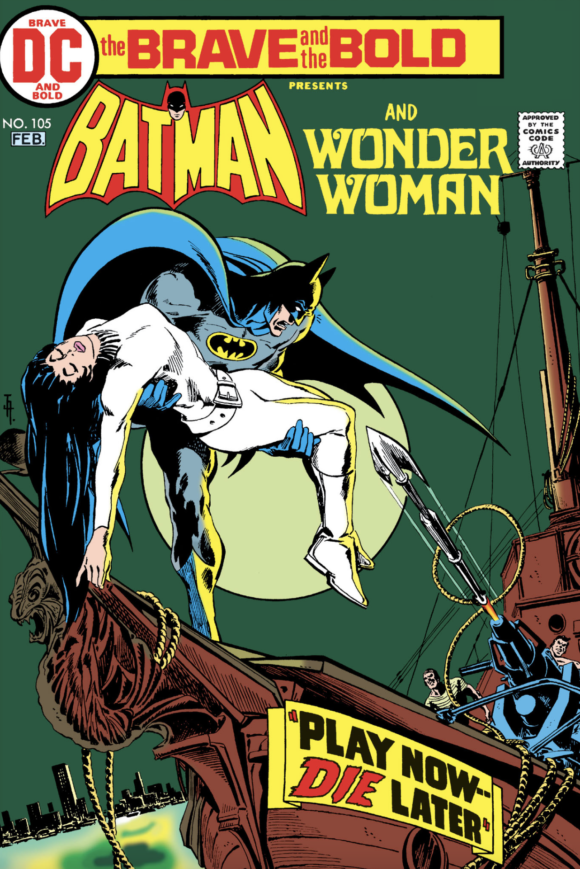 Eury: Right. That was during the period she’d lost her powers and was wearing a white jumpsuit—definitely inspired by Diana Rigg, “Mrs. Peel” from the TV show The Avengers.

Aparo: You know, I thought it was a great idea. It didn’t last long before they put her back in the original outfit.

Aparo: Yeah, and they beefed it up a little bit.

Eury: Ohhh, yeah, they did. (Laughter) Now, you drew Sgt. Rock quite a few times.

Aparo: I was never a military-type artist. I had to depend on Joe Kubert—what a great war artist. Sometimes I would show up in New York and talk to Joe about drawing Sgt. Rock. He said, “Oh, you’re doing great, don’t worry about it.” He was quite a guy, Joe. I really liked him. Before I got into comics, I used to read his stuff. 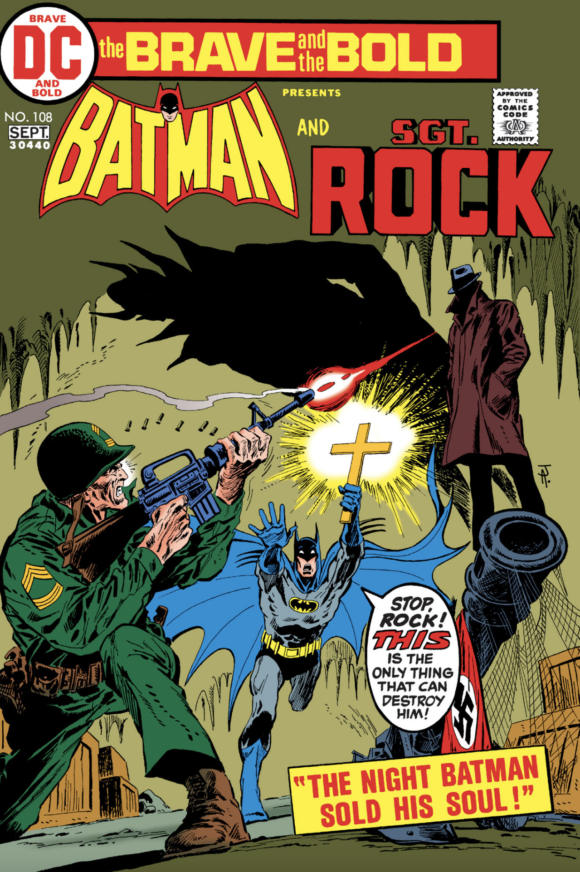 Eury: So the Batman/Sgt. Rock team-ups were the only time you ever really drew any war stories?

Aparo: I think those are the only ones, really.

Eury: Do you remember much about Wildcat? He was a Golden Age character who appeared with Batman a lot in B&B.

Aparo: Yeah, I drew him a couple of times.

Eury: Were you aware of the controversy surrounding Wildcat’s appearances? The Spectre’s, too?

Aparo: No, not really. What controversy?

Eury: Wildcat and the Spectre were, at the time, on DC’s Earth-Two, while Batman was on Earth-One. So each time Wildcat and Spectre appeared with Batman, it drove the readers who followed continuity crazy.

Aparo: We didn’t keep up much with that. 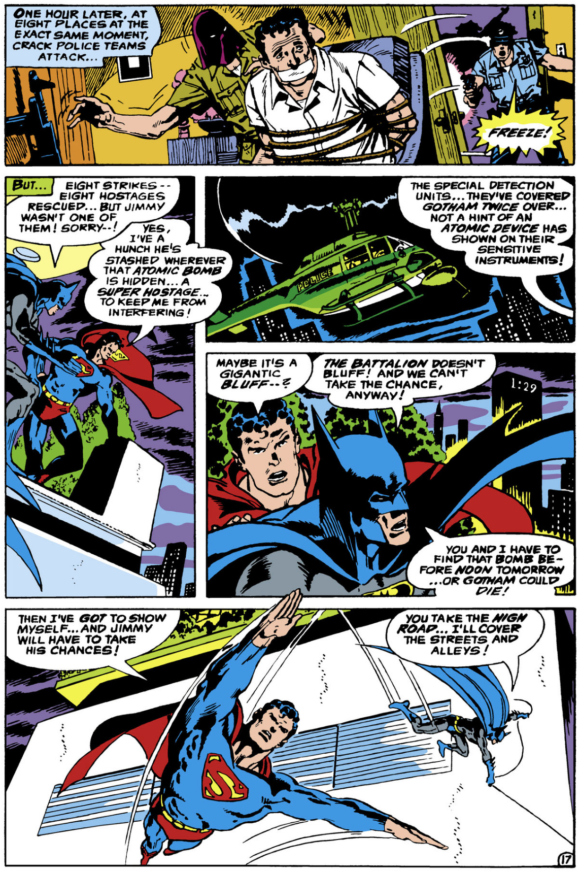 Eury: You even got to draw Superman in one issue of The Brave and the Bold (#150). He was a surprise guest-star.

Aparo: Yeah, I enjoyed drawing that.

Eury: A few DC heroes of the day curiously never teamed up with Batman in Brave and Bold, like Martian Manhunter, the Doom Patrol, Jimmy Olsen, Challengers of the Unknown, and Captain Marvel. Were there any heroes you wished you had a chance to draw in B&B?

Aparo: I used to read Captain Marvel, Jr. when I was a kid. I loved that character….

Eury: You appeared on the cover of B&B #124, coerced by terrorists to draw Batman’s death. You also appeared in the story itself, with along with (writer Bob) Haney and (editor Murray) Boltinoff. What are your recollections of this tale?

Aparo: Haney’s script had me doing the artwork from my basement studio. These guys wearing masks—hoods—came down and forced me to draw. I escaped through the window. I have a window, of course. (Chuckles) 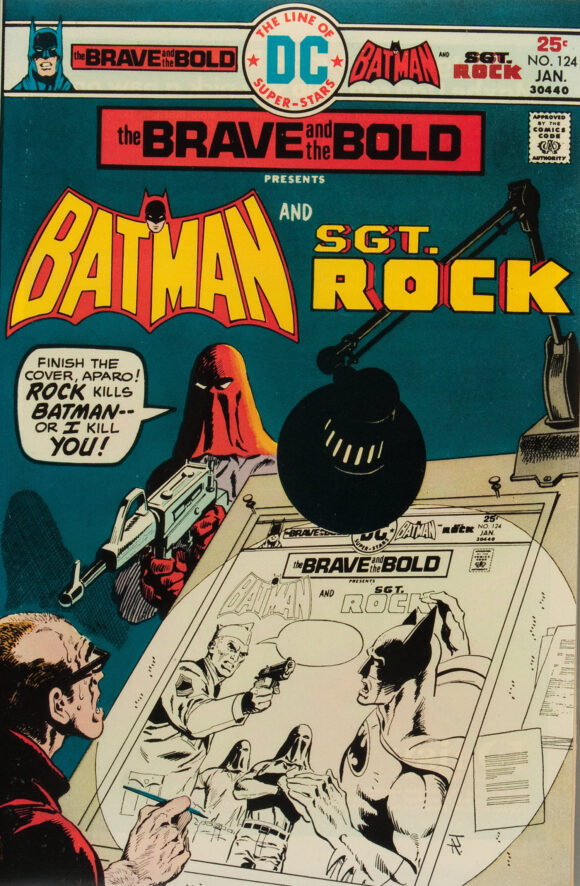 Eury: Glad you were able to get away safely! (Laughs) So, you not only were drawing comic books, but with Brave and Bold #124 you were starring in a comic book. Did your family get a kick out of that particular issue?

Aparo: Sure. But my kids never got too excited about my job. They just accepted it as what I did. They would occasionally read an issue, but they weren’t big comics fans.

Eury: You sometimes drew celebrity cameos in B&B, from Columbo to Sammy Davis Jr. Did you ever sneak one in that no one’s ever called you on?

Aparo: I don’t think so, no. But I used to leave clues in the artwork, as a hint to the reader for the next issue’s guest star. Like when I knew I was going to draw Green Arrow next issue, I’d leave an arrow.

The Team-Up Companion is due Sept. 14, though that may vary a bit depending on the vagaries of shipping. The 256-page, full-color trade paperback lists for $39.95 and will be available through comics shops and booksellers. You can also order it directly from publisher TwoMorrows. Click here.

— The TOP 13 TEAM-UP ISSUES of the Silver and Bronze Ages. Click here.