DC and Dynamite are joining forces to bring you a sequel to the great team-up from the 1960s show — and they’re bringing Kevin Smith and Ralph Garman along in the Batmobile … or is that Black Beauty? (UPDATED)

UPDATED: USA Today had it first but the full press release is below the art.

All I have to immediately add is this: When do we get a comics sequel to the Batman ’66 movie? C’mon, DC — make that happen! 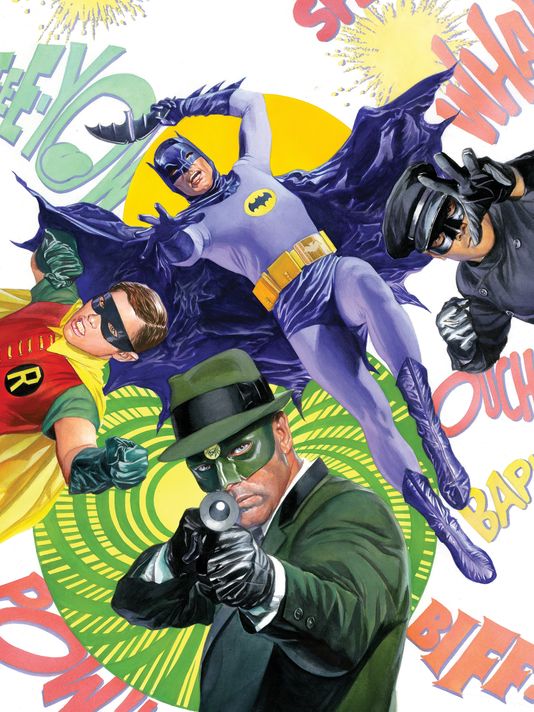 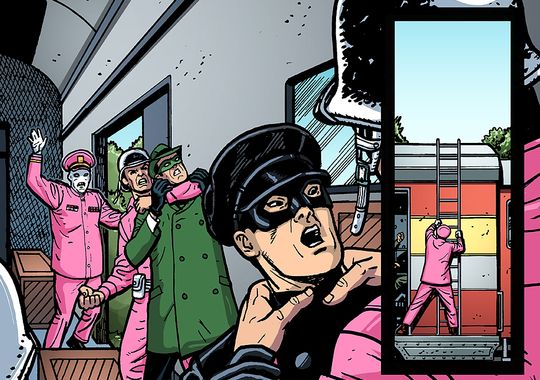 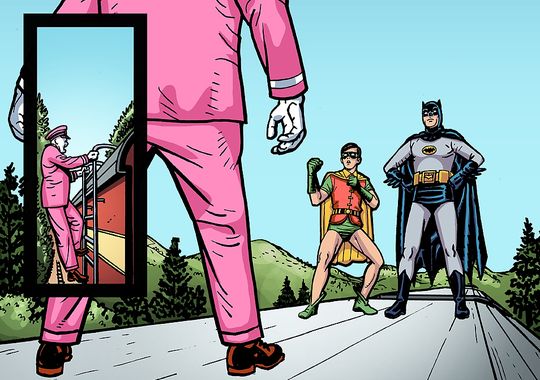 DC Entertainment and Dynamite Entertainment announced today that the caped crusaders from popular digital-first comic BATMAN ’66 will be joined by The Green Hornet and Kato for a new mini-series, BATMAN ’66 MEETS THE GREEN HORNET. This digital-first, twelve-part series will be released on a biweekly basis beginning May 21, while the first issue of the print edition will be available on June 4.

BATMAN ’66 MEETS THE GREEN HORNET will be written by all-star celebrity duo, Kevin Smith (Clerks, Mallrats) and Ralph Garman (Family Guy, KROQ radio personality). These fan-favorite writers will join forces with perennial Batman artist, Ty Templeton, to bring this incredibly fun story to life. Covers will be provided by Alex Ross, whose photo realistic painting style has garnered over a dozen Eisner awards, including his Batman-centric work BATMAN: WAR ON CRIME. Michael Allred will create a variant cover for print issue #1. The book will be available as a DC2 title through comiXology and as a regular digital comic through other partners including Kindle Store, iBookstore and Nook Store.

“Working on the ’66 Batman in any capacity is an honor and pleasure because THIS iteration of the Caped Crusader was my first Batman,” stated Smith. “So to sequelize one of the greatest pop culture crossovers of all time, I simply turned to my inner five year old. To be fair, though? I turn to my inner five year old to make almost all my decisions anyway.”

“As a 1966 Batman ‘super-fan,’ and DC Comics reader my whole life, this was a dream project for me,” said Garman. “And, although I’ve written many projects before, this was my first comic, and what a blast it was to be putting words in the mouths of these iconic characters! I’ve been preparing for this job for 40 years! “

The new mini-series follows in the footsteps of the 1960s TV series when Batman, Robin, The Green Hornet, and Kato made television history by teaming up for a momentous crossover event. Fans will not be disappointed when these masked crime fighters meet again, this time on comic book pages. The story is set in the continuity of their earlier team-up but this time the dynamic quartet will  go up against a very different General (formerly Colonel) Gumm. Fans won’t want to miss out on what Smith and Garman have in store for these beloved characters, especially when they find out what events have forced these rivals to put aside their differences to become a powerful Super Hero team.