THE BAT SWINGS! The Coolest Tribute to the Music of BATMAN ’66

Home » ACTION FIGURES & MERCH » THE BAT SWINGS! The Coolest Tribute to the Music of BATMAN ’66 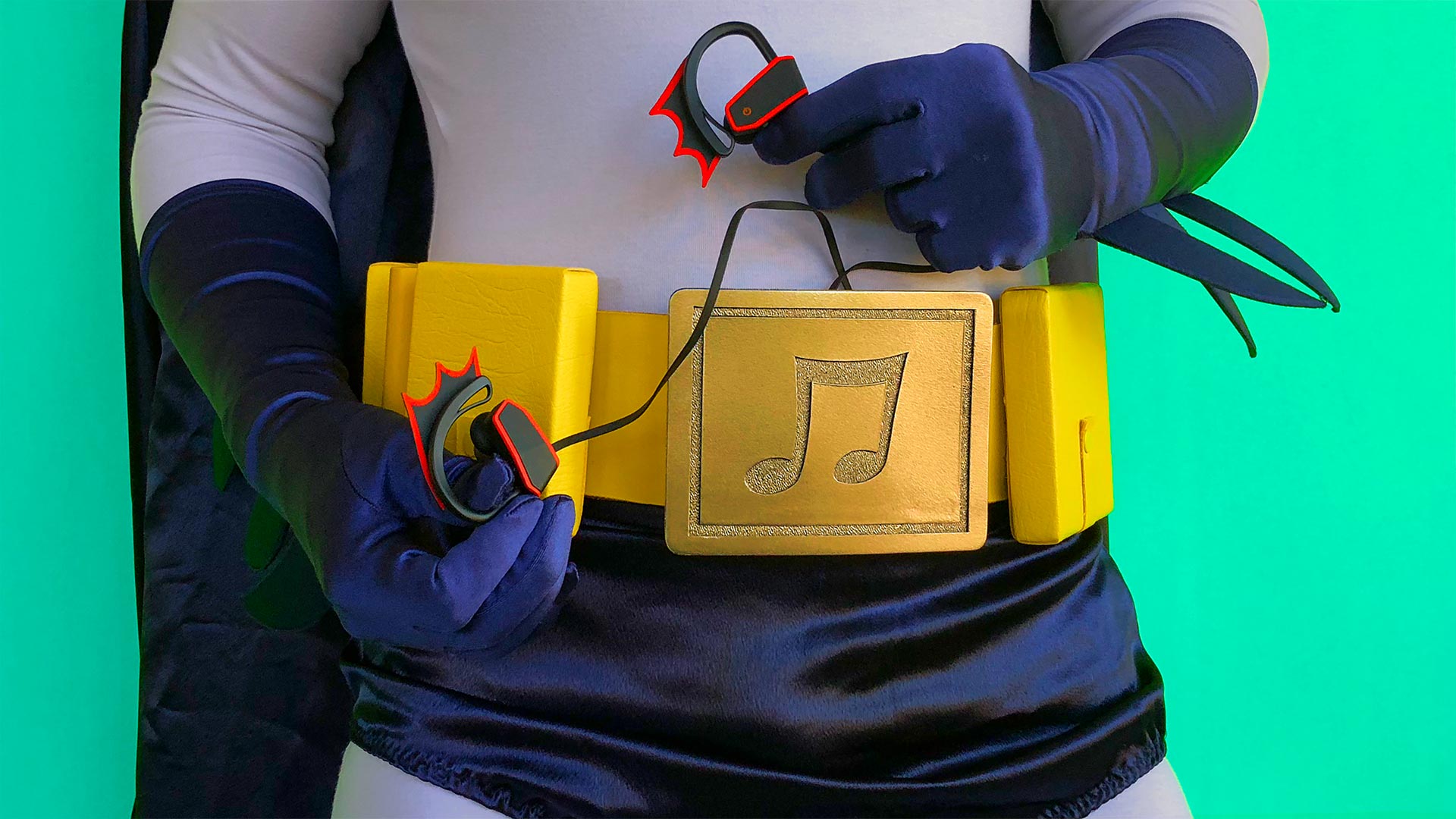 There have been a lot of great pieces of Batman ’66 merchandise over the last few years but I’m confident in saying there’s none cooler than The Bat Swings, a wildly entertaining tribute to Nelson Riddle and Neal Hefti’s Batmusic.

It’s actually unfair to call this merchandise. It’s a CD/digital download, sure, but The Bat Swings is a project by the University of Central Florida’s The Flying Horse Big Band and the proceeds benefit the music program itself. (Do yourself a favor and click here to purchase.) 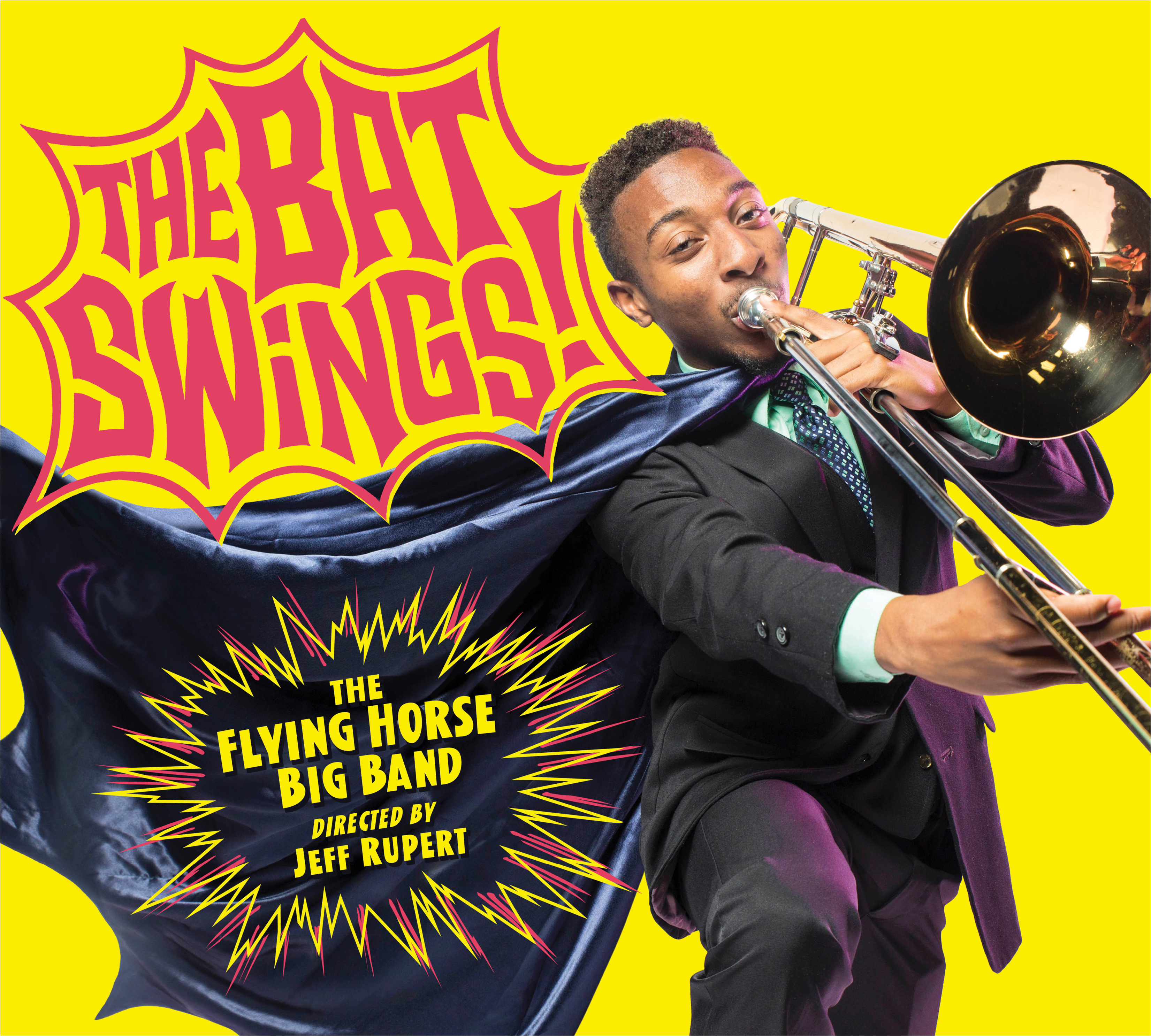 The whole thing is the brainchild of the band’s musical director Jeff Rupert, who was inspired two years ago when Riddle’s music caught his ear as he watched the 1966 movie with his kids, who were 11 and 6 at the time.

“It was their first time seeing it,” Jeff told me. “My youngest referred to himself as Batman, oftentimes in the third person. He assumed his older brother must be Robin. At any rate, I had not seen this stuff since I was a kid. I immediately remembered all of the incidental music, and realized that it was not only memorable, but a great vehicle for a jazz band. I wrote several pieces, and had several great arrangers join in on the project.”

The band performed the music in concert last spring in Orlando and the album was recorded in May 2017. The record was released just this week — and I highly recommend it.

There are 13 tracks (!) — eight basic cuts, plus five “Bat-spins” that divide most of them. And while most of the selections take their names from the tracks on the 1966 Batman TV and movie soundtrack albums, they are not covers. Rather, each is a pastiche, featuring the track’s primary musical theme interwoven with other threads from Riddle and Neal Hefti’s Bat-repertoire. (There are also two non-Battunes included: the classic Spider-Man cartoon theme and a smooth version of Amazing Grace. This is a college music project, not just a Batman tribute.)

The production value is top-notch and, as the album title suggests, the music really swings. These kids play like the pros — and when you listen, you feel like you’re hearing additional tracks from the show (or movie as the case may be).

The project has no bigger champion than Matthew Dunn, a full-time print and web producer at UCF. He’s incredibly enthusiastic about the album — and the show itself. He designed the brightly colored, Batman ’66-inspired CD package and 16-page booklet, and helped with the production of last spring’s concert. 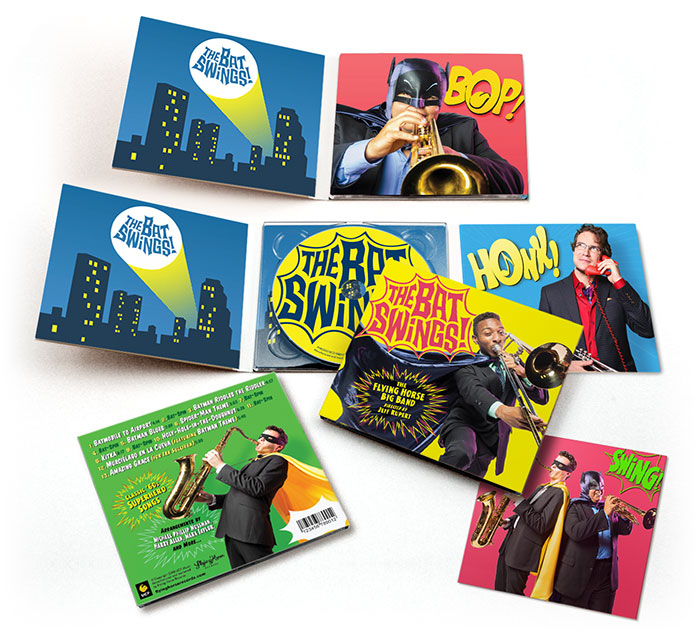 “The jazz concert at UCF Celebrates the Arts is always a big draw, with a couple thousand attendees,” Matt explained. “I worked with Jeff to develop promotional art and display graphics that appeared behind the band. I designed a poster, and one of the undergraduate printmaking students made it into a three-color silkscreen…

“I worked with two very talented UCF student photographers, Austin Warren and Jenn Allen, who took the promo photos for the performance and album sleeve. Robert Fischer is the UCF student printmaker who made the posters as well as some T-shirts.

“The theatre department got involved. They set up some beautiful stage lighting that capture the vibe of the show, and, between songs, four of their acting students recited dialogue from the TV show that I had curated (a lot of humor and bits that remain socially and politically relevant).” 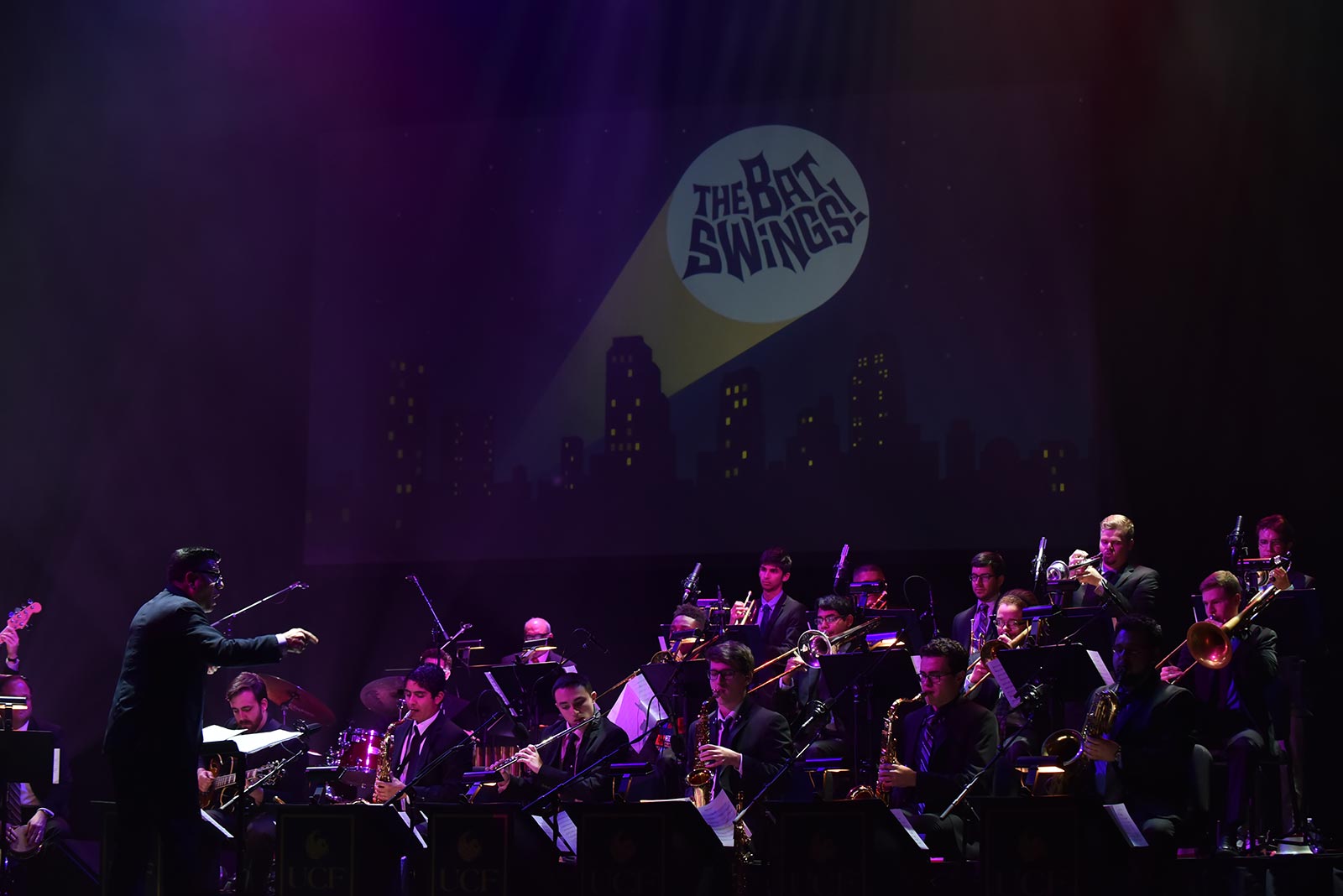 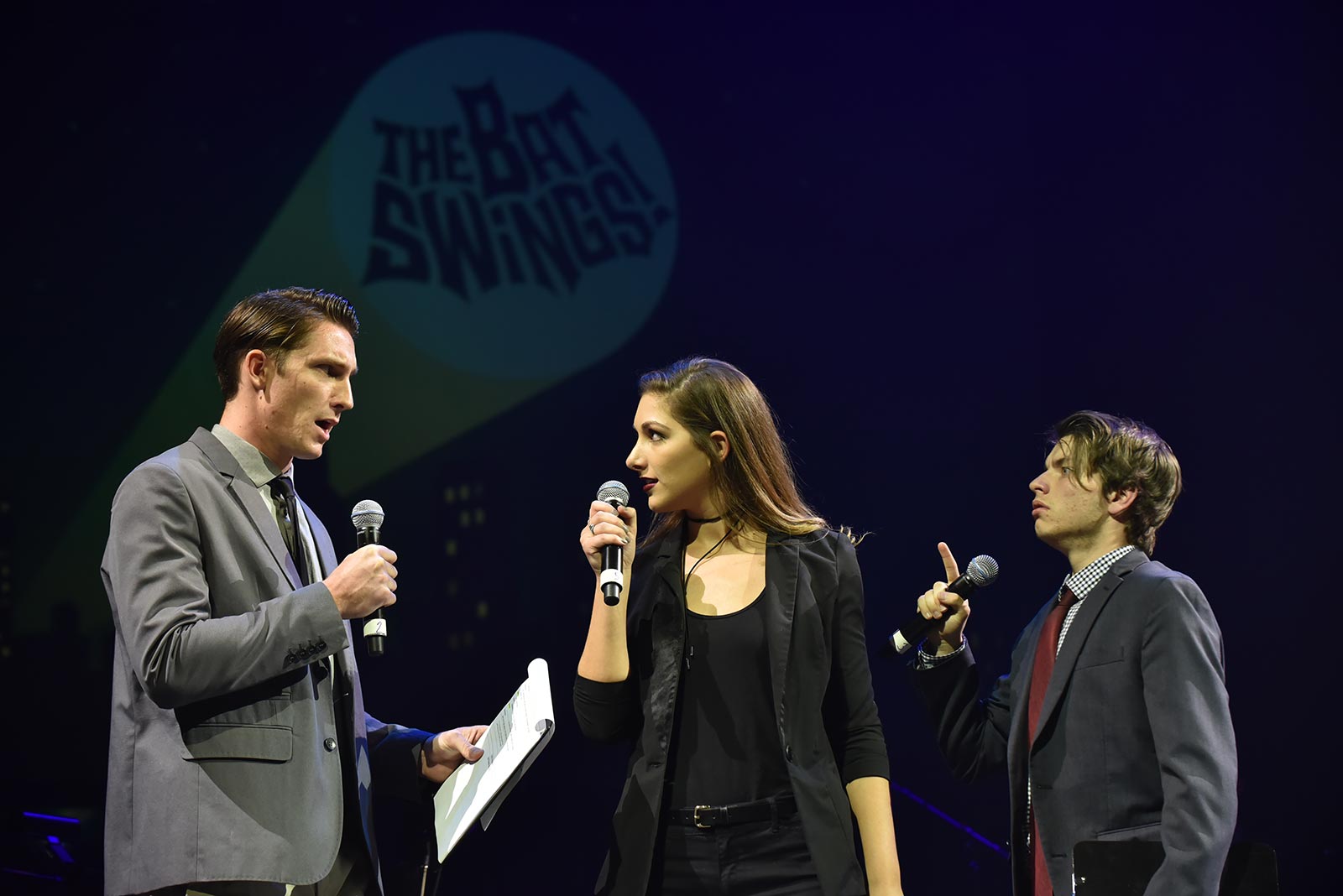 He added, “I created a video backdrop so that the Orlando skyline gradually turned from day to night. When the band kicked into the Batman theme, The Bat Swings! signal appeared over the buildings. During the final number, we had footage from the feature film (mostly the Bat-fight on the submarine) interspersed with the BOP!/HONK! images of the band members that you see in the CD liner notes. After the last song, the production credits rolled in the style of the TV show’s end credits. I made a POW! prop for the lobby for attendees to pose with.” 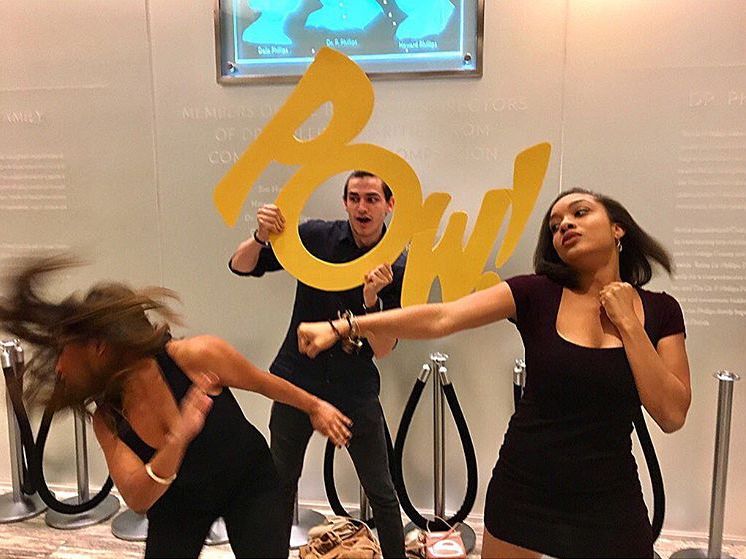 “It was a pleasure to produce, and having Matt involved was superb,” Jeff said. “He has an encyclopedic knowledge of the show, and did a great job on the CD package. This is our tenth release on Flying Horse Records. I started the label about six years ago, as a vehicle to teach students the ins and outs of making commercial recordings. We’ve had all our jazz albums chart on the jazz charts.”

With so many Batman ’66 fans out there who will want to hear this, I predict the streak will continue.

The Bat Swings! is available directly through UCF by clicking here. You can also purchase it or stream it from most major online retailers and platforms.