The Amazing Creators of Amazing Forest

Hot off the Dark Horse release of their monster book Gamma, Ulises Farinas and Erick Frietas have just dropped the first issue of their  sci-fi anthology Amazing Forest on Comixology through Monkey Brain. The creative pair have a much different plan than most working in comics today. 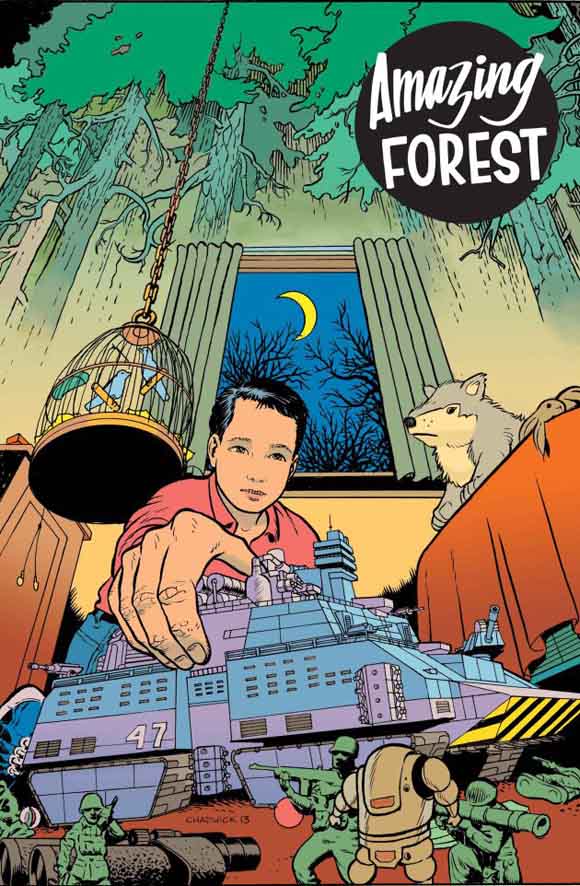 How did Amazing Forrest come about?

Erick  We also spend a lot of our time making up stories, then judging them. So it was pragmatic to have an outlet for them.

Ulises, your art’s been showing up in quite few books. So now you wanted to write?

Ulises  I don’t wanna end up as an old man with a crippled hand and can’t do nothing for myself. I don’t want a piece of the pie, i want the whole oven.

Seems like you’ve learned from people who came before you what not to do.

Ulises Rather learn from other people’s mistakes.

So you guys have known each other for some time.

Ulises Yeah, since the internet’s been around, we’ve been emailing each other on AOL.com

Erick I think we met in middle school. My story is — I saw this new kid drawing ninja turtles — and I liked Ninja Turtles. So I said whatsup. His story — is apparently different.

So you’ve know each other for how many years?

Do you always work together, or write solo sometimes?

Erick  I have my own projects. And Ulises has his. But it seems like people take notice when we write together. Which is pretty cool.

So the sum is greater than the parts?

Erick Yeah, I don’t think my strengths are in just writing, its why I draw first and foremost. And I’d rather work with someone smarter than me, than try my best to make something alone that is not as good.

Erick — you mention other projects. What are doing besides writing comics with Ulises.

Erick I work a lot in the film business. I have been working in production for 10 years. 5 years in corporate/commercial. The last 5 years in narrative productions… Any TV or film shooting in NYC. I just got off working on a pilot for Showtime. Before that, it was a chinese gangster flick.Before that it was Scorsese’s Wolf of Wall St.So, I take what I learn from being at the bottom of the ladder on bigger gigs. And use that knowledge to make my own productions.I have two short films coming out next year. One I wrote and produced — the other I just produced. That would make 7 short films.

So tell me about Amazing Forest – It’s an anthology? With guest artists?

Erick Yes, a throw back to pulp… A lot of these stories are really weird and sad. We have a possessed horse. Ice cream wars against raw meat. An ancient sword thief. A very dumb goblin. Just all around silliness. But, we approach it with a certain darkness, like Twilight Zone.  I was always fascinated by Twilight Zone’s ability to make a quick story that stays with you for a long time. I’m hoping we accomplished that. 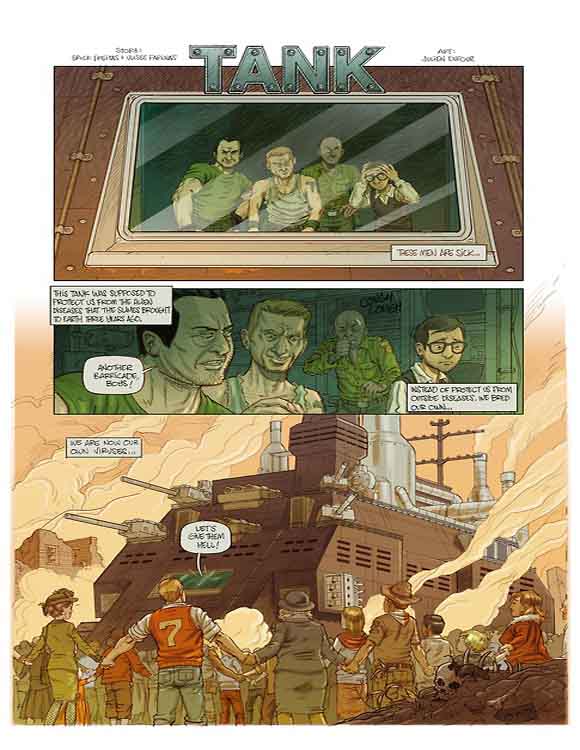 Tell me about issue #1

Erick Tank is about a group of men trapped inside of a tank because the world has been taken over by these alien slimes. One of them has cabin fever and struggles with being confined.

Ulises My favorite story is Birdwatcher, because it just hits you in the gut.

Erick Birdwatcher is quite sad.

And a Paul Chadwick cover! I’m looking forward to more Amazing Forest in the near future.