David Gallaher, co-creator of High Moon with artist Steve Ellis, is back with another excellent reading list — this time of werecomics. As in, comics featuring werewolves.

Why this month? Because Halloween’s coming! Why today? Friday the 13th is upon us! What does that have to do with anything? Because it’d be really bad luck to be bitten by a werewolf, especially in October!

But seriously, folks: Gallaher and Ellis’ High Moon gets the remastered treatment from Papercutz on 10/24. Dig it. And dig this excellent list of THE 13 GREATEST WEREWOLF COMICS. — Dan: 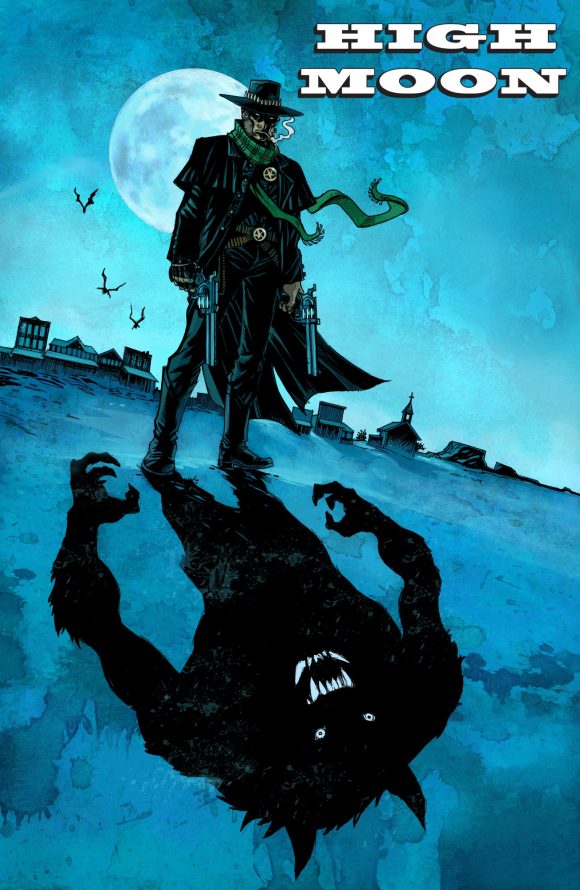 I’ve always loved werewolves. The idea of shape-shifting and transforming our bodies into something else has always fascinated me… and I’m not alone. As far back as the ancient Greeks and Romans, we can find myths with humans morphing into animals and back again. Popular literature and films have kept stories of vampires and zombies alive for decades, but this year werewolves and werefiction are biting back. To celebrate the Halloween season, I’m thrilled to present the 13 Greatest Werewolf Comics, guaranteed to enchant and leave you in suspense: 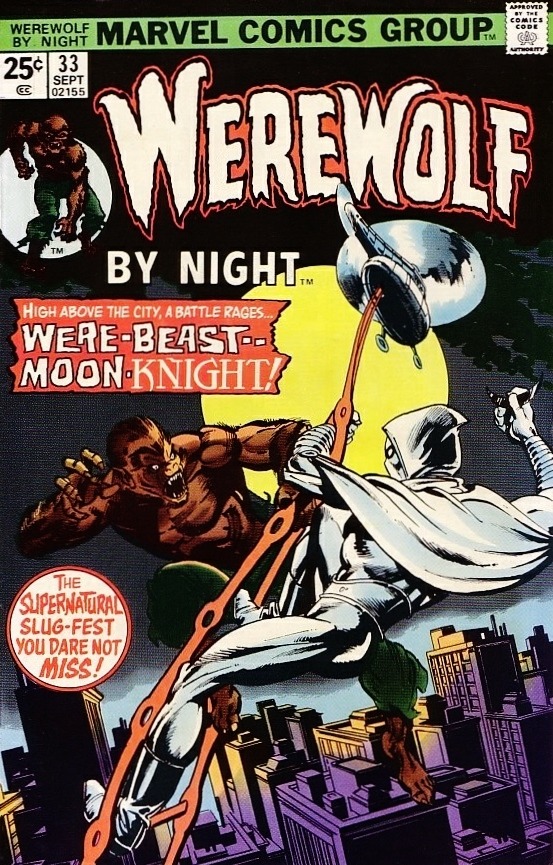 2. Werewolf. I’m a fan of offbeat comics stories and there are few things more offbeat than Dell’s attempt to capitalize on the popularity of the Universal monsters. Having already published superhero versions of Dracula and Frankenstein, Dell thought they’d try their hand at re-imagining The Wolf Man. In Werewolf #1 in 1966, artists Bill Fracchio and Tony Tallarico told a short-lived story that was unlike any other werewolf tale I’ve read. After crashing his experimental aircraft in the Arctic Circle, pilot Wiley Wolf develops amnesia, goes feral, and finds himself adopted by wolves. After being rescued, Wolf joins the CIA, volunteers for a series of cybernetic experiments, and becomes a shape-shifting super-agent. The series is as glorious as it is goofy — and it’s well worth the read. 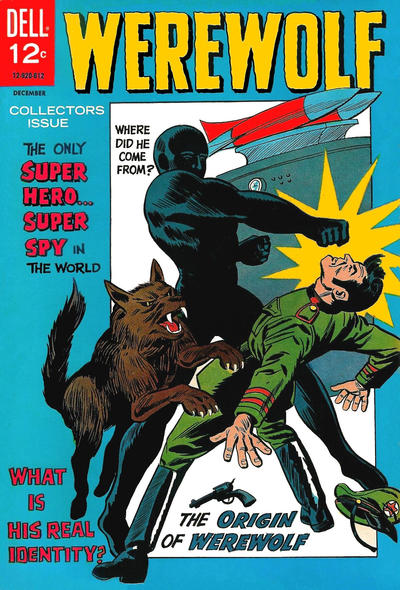 3. Jughead: The Hunger. Jughead Jones has always had an insatiable appetite. In Jughead: The Hunger, Frank Tieri and Michael Walsh explore the sinister origins of one of Archie’s most beloved characters. Fans of The Walking Dead and Afterlife With Archie will get a kick out of it. 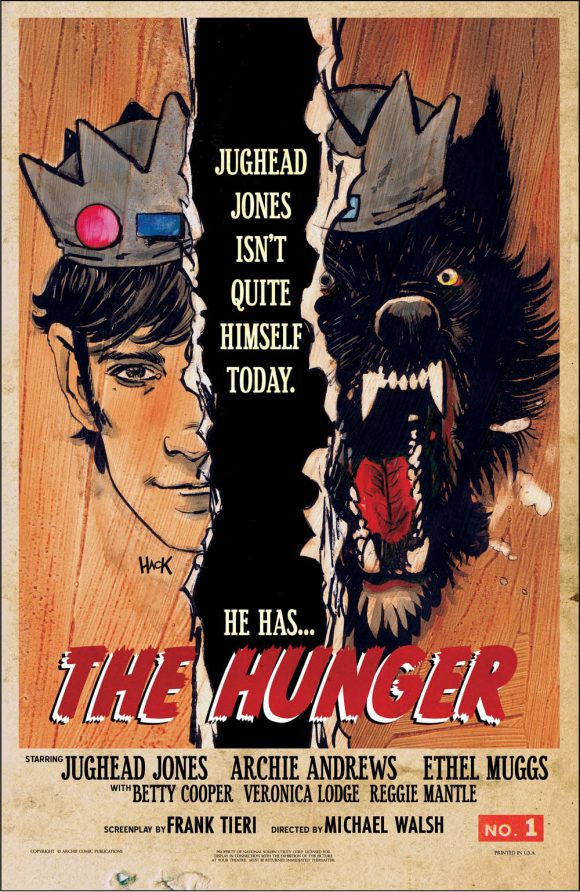 4. Anathema. How far will one woman go for the salvation of her beloved? In Rachel Deering and Christopher Mooneyham’s exceptional graphic novel Anathema, we learn that love comes with a steep price. Fun and disturbing, this story is a long song to classic horror fiction. 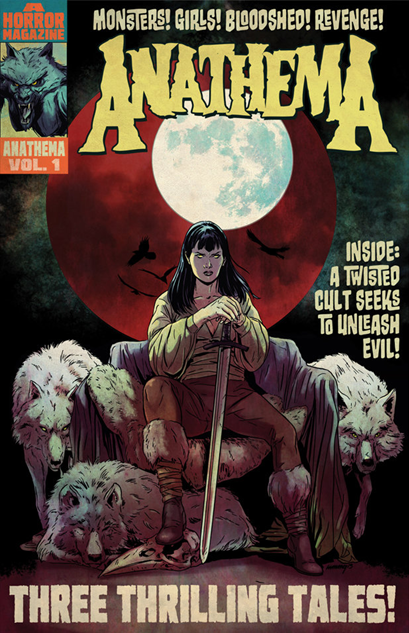 5. How to Be a Werewolf. Since being bitten by a strange wolf as a child, Malaya has tried to live a quiet life, keeping tight control over her more savage impulses. That is, until a stranger wanders into her coffee shop and introduces her to a whole world she never knew existed. Shawn Lenore’s monstrously good webcomic series is filled with emotional resonance and deep, complex world-building. Readers looking to take a bite out of something new can check it out here. 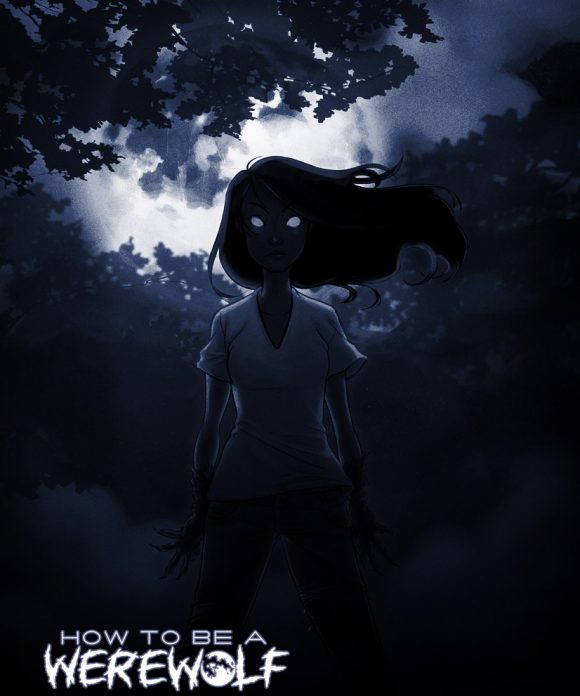 6. Hellboy: Wolves of St. August. Written and illustrated by Mike Mignola, The Wolves of Saint August was originally serialized in Dark Horse Presents. After 167 citizens are murdered in a small Balkan village, Hellboy investigates a complex curse that beings him face to face with ghosts and werewolves. 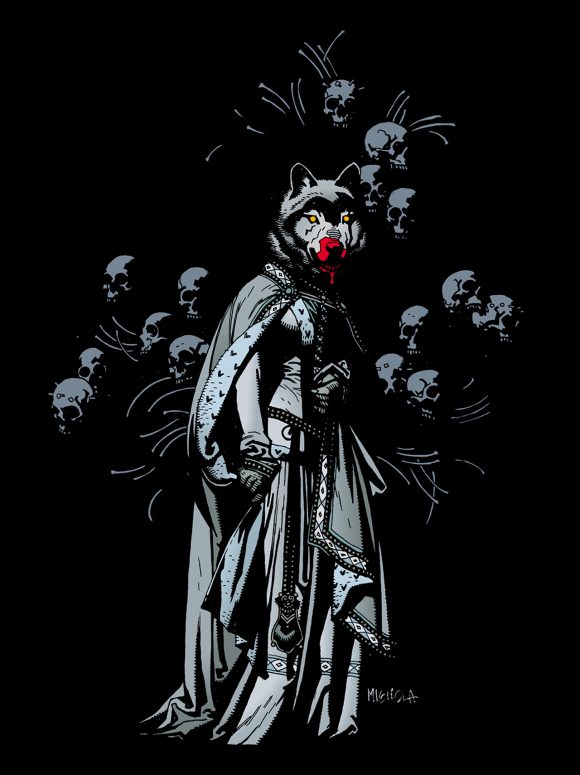 7. Man-Wolf. In the 1970s, superheroes came alive through book-and-record sets. Power Records, an offshoot of Peter Pan Records, released vinyl records that focused on the adventures of Superman, the Incredible Hulk, Conan, Wonder Woman and more. The blurb on every album sleeve promised ‘the action comes alive as you read!’ — and in the case of Spider-Man: Mark of the Man-Wolf — the promise was delivered. Full of blood-curdling action and melodrama, Spider-Man finds himself face-to-face with a werewolf. Produced by Herb Davidson and Charlotte Saunders, and adapted from a story by Gerry Conway, the book features outstanding art from Gil Kane, Ross Andru, John Romita and Tony Mortellaro. 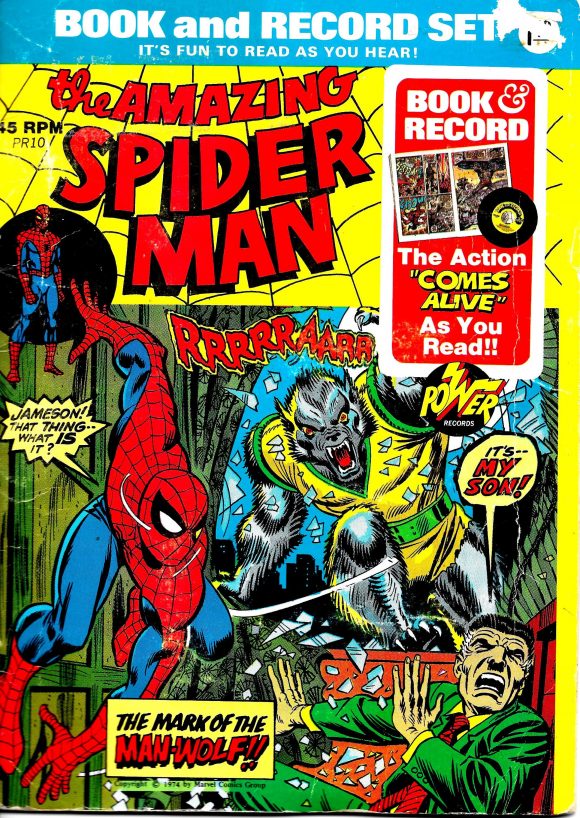 8. Wolfsbane. A Scottish mutant, Rahne Sinclair possesses the ability to transform into a wolf at will. As Wolfsbane, she has faithfully served Charles Xavier’s dream as a member of both the New Mutants and X-Factor. First published in the summer of 1991, Wolverine: Rahne of Terra is a Wolvesbane-centric story that places Wolverine as the villain in a gorgeous medieval fantasy setting. 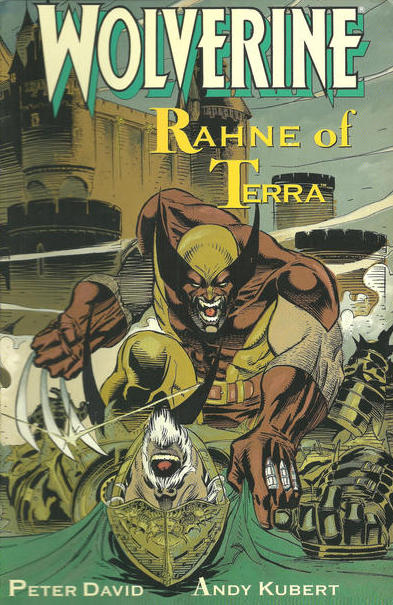 9. Judge Dredd. In Cry of the Werewolf, Judge Dredd must descend into the Undercity and figure out how to stop a flesh-eating werewolf before all of the citizens in Mega-City One end up slaughtered. Written by John Wagner and Alan Grant and illustrated by the beloved Steve Dillon, Cry of the Werewolf is a violent and intense horror story with the cinematic scope you’d expect to find in a Hitchcock or Kubrick film. 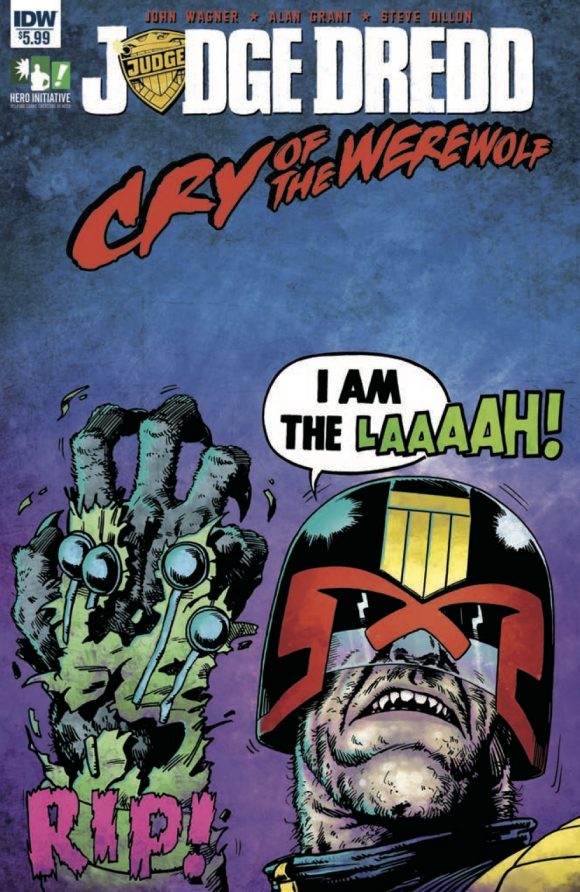 10. Weird War Tales. During the early 1940s, Warren Griffith was a werewolf who served within a special military unit. Taking the codename Wolfpack, he served with the Creature Commandos. Created by J.M. DeMatteis and Pat Broderick, Warren made his debut in DC Comics’ Weird War Tales #93 — a story made extra special by Joe Kubert’s iconic cover. 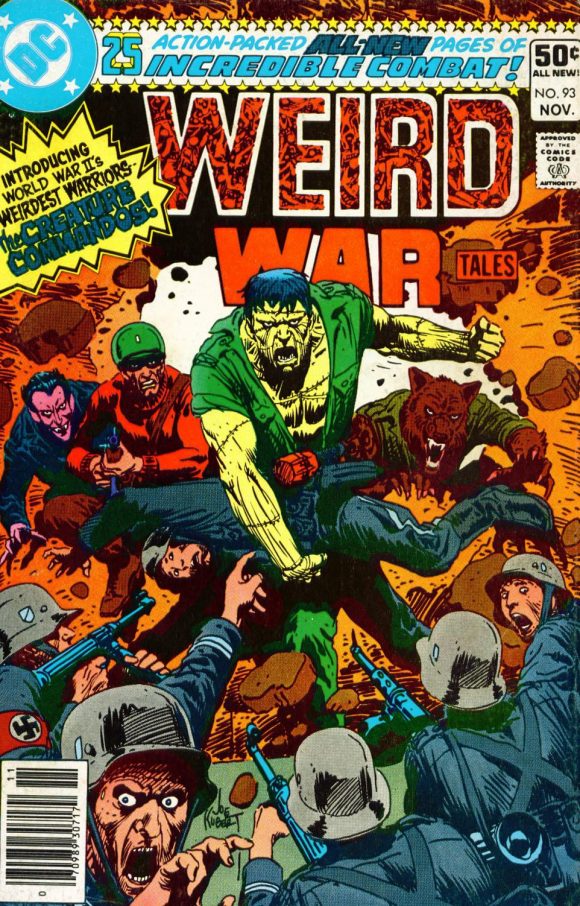 11. The Astounding Wolf-Man. Written by Robert Kirkman with art by Jason Howard, The Astonishing Wolf-Man is the story of CEO Gary Hampton, who after being mauled by a werewolf, decides to use his new powers of lycanthropy for good. If you’ve never read this series, you’re missing out on one of Robert Kirkman’s most energetic adventure stories, featuring one of the world’s most unlikely superheroes. 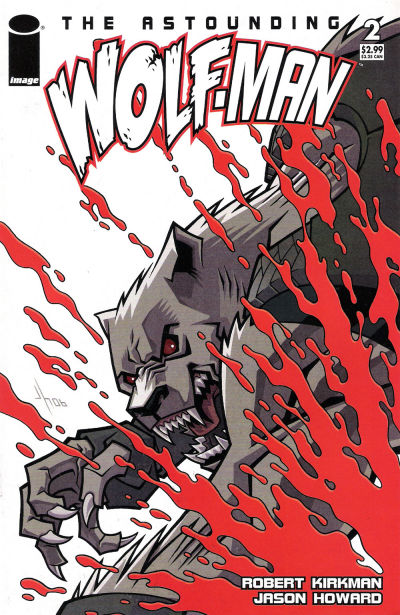 12. Bigby Wolf. When the creature known only as the Adversary conquered the land of fairy tales, all of the infamous inhabitants of folklore were forced into exile in New York City. Bigby Wolf, also or formerly known as the Big Bad Wolf, is the former sheriff of Fabletown and the chief protagonist in Vertigo’s classic series Fables. In the storyline Werewolves of the Heartland by Bill Willingham, Craig Hamilton and Jim Fern, Bigby stumbles across Story City — a small town occupied only by werewolves. This graphic novel is a great entry point for new readers and a MUST for longtime fans of Fables. 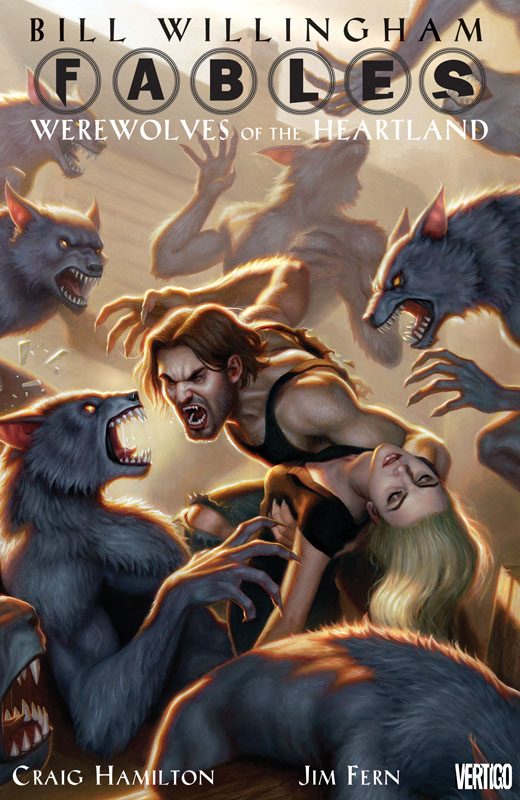 13. Capwolf! In the offbeat story Man and Wolf, lycanthropes from all over are converging on the town of Starksboro, Mass., and it is up to Captain America to stop them. It turns out that Dredmund Druid and Deadly Nightshade began mass-producing werewolves — and it looks like the Star-Spangled Avenger is their next victim. Capwolf is a long-time joke among comics fans, but Mark Gruenwald and Rik Levins bring a sense of Silver Age charm to a story that features Wolverine, Cable, Wolfsbane and Doctor Druid! 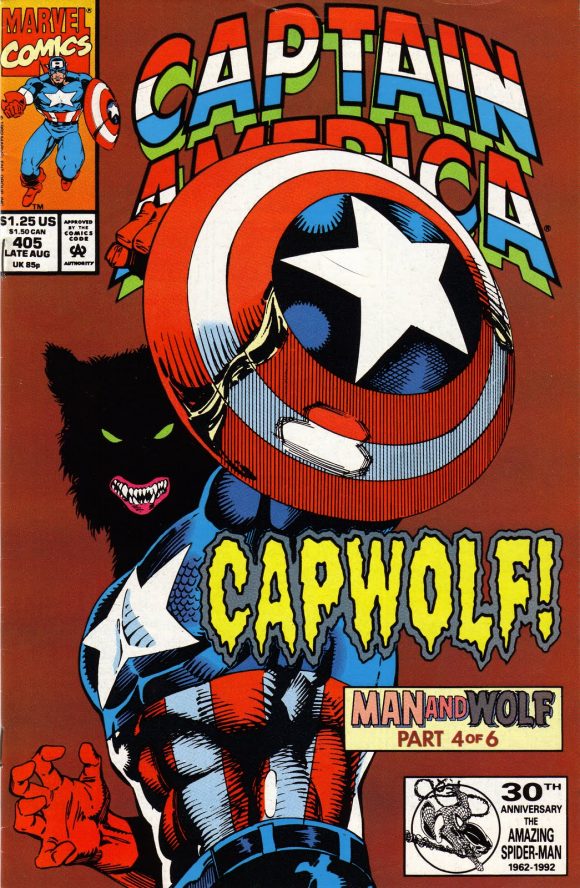 Fans of werewolf fiction should also check out High Moon: Bullet Holes and Bite Marks on 10/24. As I mentioned earlier, I’ve always loved werewolves and High Moon has given us the opportunity to use werewolves as a metaphor for violence, industrialization and inhumanity. Featuring the gorgeous artwork of my colleague Steve Ellis and the outstanding lettering of Christy Sawyer, it pairs perfectly with Halloween! — David Gallaher