The Archies meet Blondie — and the artist has you covered… 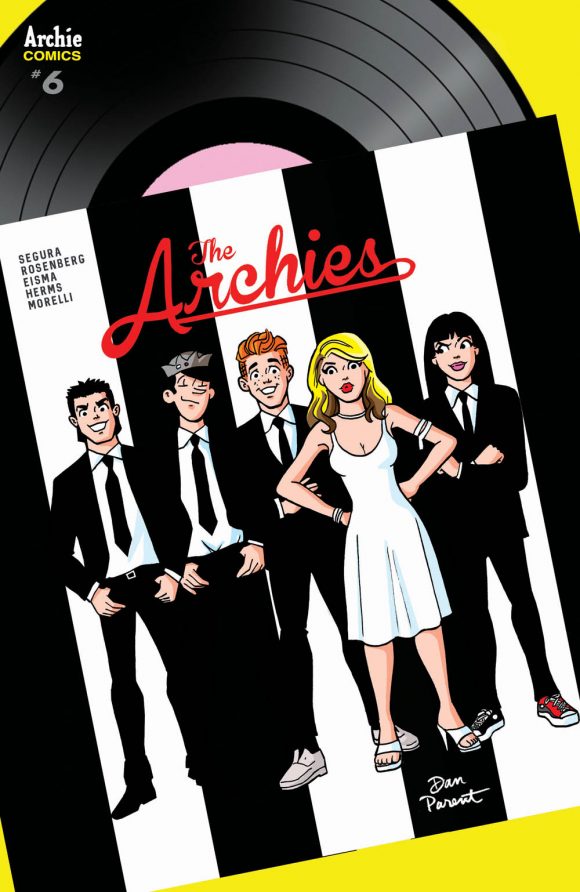 Last summer, when The Archies ongoing series was announced, I put together a list of 13 Musical Acts We’d Like to See in THE ARCHIES. Because part of the kick of the series — by Alex Segura, Matthew Rosenberg, Joe Eisma, Matt Herms and Jack Morelli — is the idea that the Riverdale quintet would meet up with bands past and present. (Click here to check out our list. You’ll dig it. Promise.)

Well, to date, two of our selections have made the cut: the Monkees, who appeared in The Archies #4 earlier this month (click here) and, Blondie, coming in March’s The Archies #6. (Final order cutoff is 1/22, by the by, so get crackin’!) 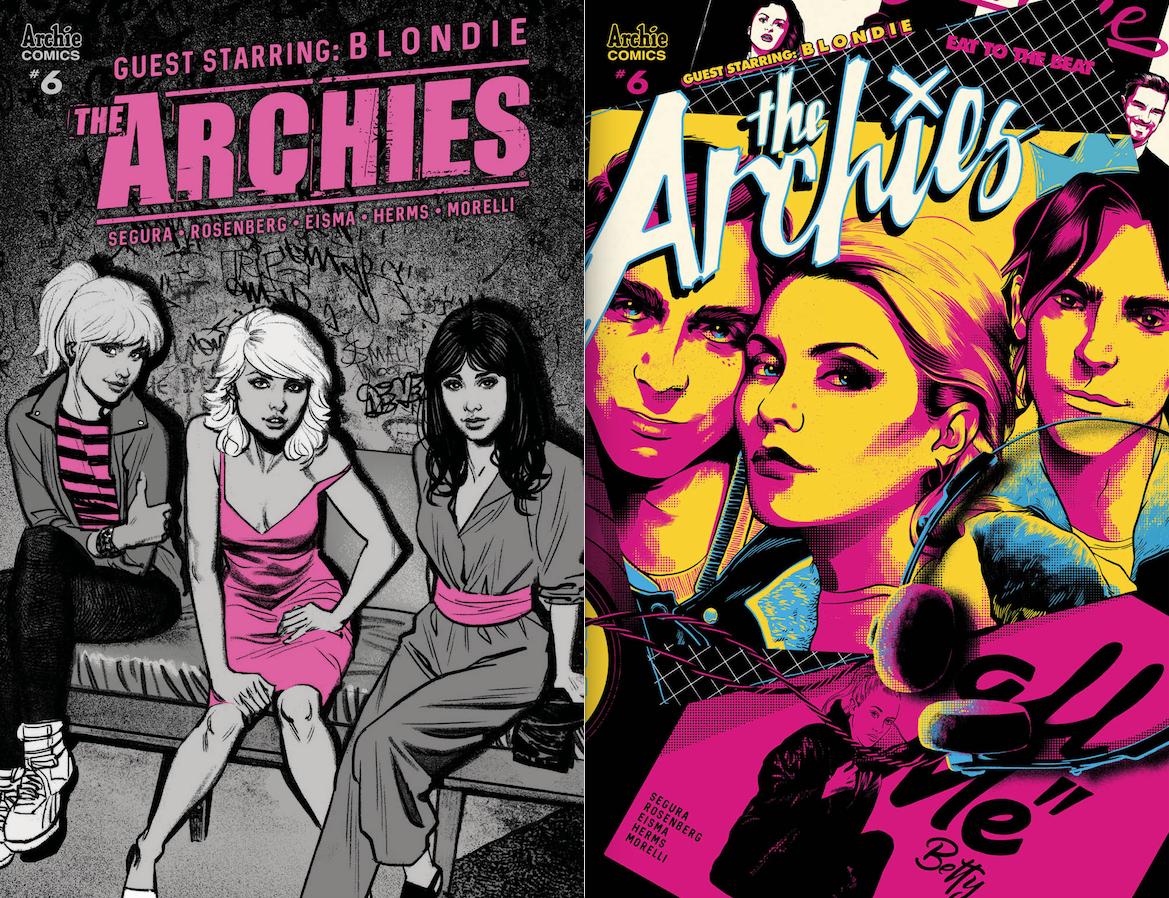 Left: Main cover by Greg Smallwood. By the way, this is what I suggested in my list last July: “Blondie. As Archie tries to score an opening gig at CBGB with the ultimate new wave act, Betty and Veronica get style tips at the knee of Debbie Harry.” Hmmm… Right: Variant cover by Matthew Taylor.

Now, one of the biggest Monkees fans I know is artist Mike Allred, who did a variant cover for The Archies #4. So I asked him to put together a list of his 13 Favorite Monkees Songs. Enthusiastic dude that he is, he jumped at the chance and you can check out his list by clicking here.

But I’m also a big Blondie fan. And, as it happens, so is artist Dan Parent, a modern master of the classic Archie design, who did the variant cover you see above. Dan was also quite willing to put together a Top 13 list, and you’ll find it below.

So put on your earphones, crank up the volume and read on…

As a lifelong Blondie fan, I was really excited to do a cover for the “The Archies Meet Blondie” book! I’m also excited to pick my 13 favorite Blondie songs for 13th Dimension! Here goes!

13. Maria. This was Blondie’s comeback song in 1999 after a 17-year hiatus. It’s a good hooky pop song and reminded me of some of their earlier work.

12. Union City Blue. One of the nice ballads from Eat to the Beat, which I feel is their best album. Her voice is so sweet on this song.

11. X Offender. From Blondie’s first album, which is so great in its sound, borrowing a lot from girl groups of the ’60s, and a blend of punk rock. This album was a pure rock album (along with Plastic Letters) before they starting mixing different styles. This song really represents that early sound.

10. Rapture. Probably their most ground-breaking song, bringing rap to the mainstream airwaves. It was not one of my favorites early on, but it holds up really well throughout the years. A good example of Blondie’s experimentation with their style.

9. Atomic. Not a huge hit, but a really cool punkish/disco song. Another song that really holds up well.

8. Hanging on the Telephone. Not an original Blondie song; it’s a cover of a song by the Nerves. But it’s a really good rock song.

7. Slow Motion. Not a single, but a really sweet sounding song. It’s like a 1960s girl group tune that could have been produced by Phil Spector.

6. (I’m Always Touched) by Your Presence Dear. Yet another sweet, mellow song that has a 1960s sound to it. It has weird, trippy lyrics, and at the same time it’s a love song!

5. Call Me. This was their biggest hit, and it really represents the sound of the times. It’s a little post-disco, a lot new wave and really more of a Debbie Harry song than Blondie, since it’s really a team-up of Debbie Harry and Giorgio Moroder.

4. Rip Her to Shreds. From their classic first album, this is the best track on it, a punk song that, again, beckons back to the 1960s girl group songs. (By now, you can really tell that I like that sound!)

3. Heart of Glass. The famous disco song. Meant as a parody of disco, it became a disco hit. And put Blondie in the mainstream. But it’s a lot more than that, lots of layers to it, really good singing, and easily one of the most re-listenable songs of theirs!

2. Sunday Girl. Another one from their breakout Parallel Lines album, this is pretty much the perfect pop song. It’s sugary sweet, with a terrific guitar riff and is a great song of the new wave era.

1. Dreaming. My favorite Blondie song, maybe my favorite song ever! (Although that changes a lot!) The perfect song: part pop, part punk, an insane drum beat that never lets up, and a great, simple message about the beauty and simplicity of dreams! Her voice is at its best, and I think this was the high point of their career. I remember hearing it on Saturday Night Live (as a 13-year-old ) and being shaken by its sound!

So there you have it! As with most lists, everybody has their opinions, and suggestions for what was NOT on the list! While The Tide is High and One Way or Another are fine songs, I don’t think they’re the cream of the Blondie crop!

Thanks for letting me take part in this fun assignment!