Superman II debuted 40 years ago in the US on June 19, 1981 — a superhero cinematic touchstone beloved for decades. To celebrate, we’ve invited the hosts of the ever-popular Superman Movie Minute podcast — 13th Dimension regulars Rob Kelly and Chris Franklin — to take bring you an INSIDE LOOK at one of the greatest comics films in history. Here, Rob salutes the movie from a four-decade perspective. Meanwhile, Chris ranks the TOP 13 SUPERMAN II COLLECTIBLES (click here). Dig it. — Dan

The time: Most likely Saturday, June 20, 1981. The place: the Westmont Theater in Westmont, NJ (a location supposedly frequented by a young Steven Spielberg when he briefly lived in the area). The 9-year old me was spending my afternoon watching Superman II for the first time. The Westmont was an old, classic movie palace, with ornate fixtures, red plush carpeting, and a vast balcony, seating what seemed like 10,000 people. Having completely adored Superman: The Movie, I was understandably eager to see the follow up. 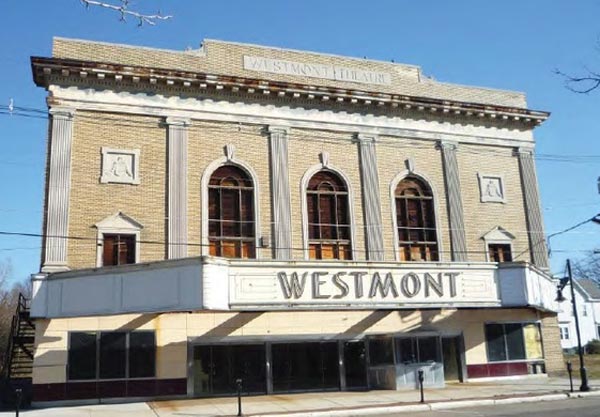 If memory serves, the theater was packed to the rafters, mostly with kids my age, dropped off by their parents who were probably happy for the few hours of peace and quiet the movie afforded them. I was delighted with the film from its very first frame, since, as we’ll discuss shortly, Superman II wore its comic book-y roots on its bright blue sleeves, and for a 9-year old comics fanatic, that was exactly what I wanted.

But nothing prepared me for the moment when General Zod, Ursa, and Non attacked the Daily Planet building, laying waste to Perry White’s office and threatening to do the same to Lois, Jimmy and (less worryingly) Lex Luthor. Just when things seemed at their most dire, we heard that theme start to play, accompanied by a quick shot of our hero flying up to the window, and delivering this line:

The theater erupted. No, beyond erupted — it exploded with a force rivaling the destruction of Krypton, recapped at the start of the movie. I don’t think I heard much, if any, of the dialogue for the next few minutes, because all the other kids and I were cheering so loudly. It was one of the most thrilling movie-going moments I have ever experienced and still, for me, remains the single greatest superhero/comic book movie moment of all time, even 40 years and a thousand superhero movies later.

At this point, we all know the checkered production history of Superman II. Hired to direct both Superman movies back-to-back (a Herculean labor), director Richard Donner clashed with producers Ilya and Alexander Salkind, who were watching money fly out the door, with no guarantee that the films would be a hit. After shooting something like 70 percent of Superman II, Donner was fired, and director Richard Lester (who directed 1973’s The Three Muskeeters for the Salkinds) was brought in to finish the film.

Unfortunately for Lester, actors Margot Kidder and Gene Hackman wanted to show solidarity with Donner, and weren’t all that keen on participating. Kidder, contractually obligated, ended up shooting for Lester, but Hackman, one of the biggest, most renowned movie stars at the time, simply refused, which is why if you ever see Lex Luthor from the back in Superman II, you are not looking at Gene Hackman. 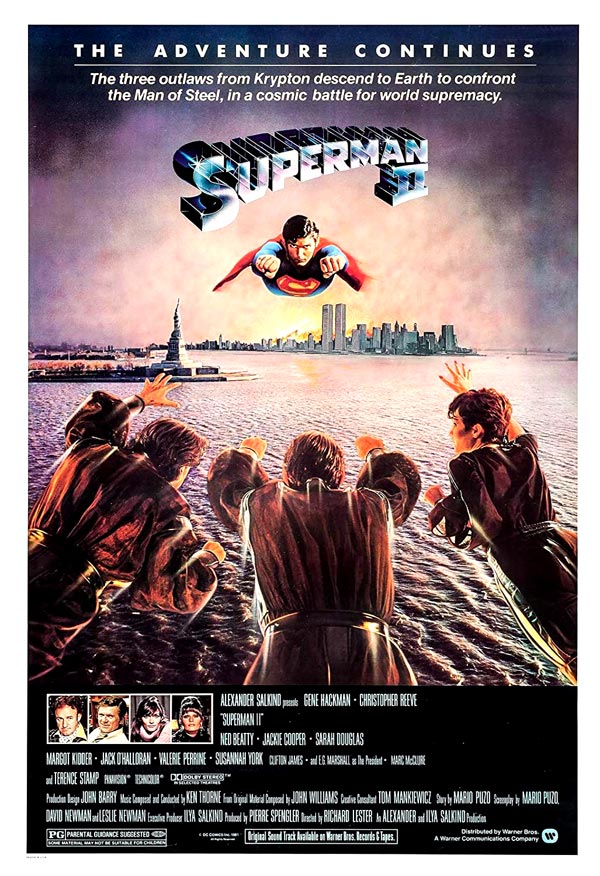 Lester, a fine director (besides the aforementioned Three Musketeers, he also directed classics like A Hard Day’s Night and Robin and Marian), made the dubious, but understandable, choice to change tone and direction. He wanted his Superman film to be more like a comic book — less subtle, with broader humor and characterization. Not wanting to simply copy another director’s style makes sense on a number of levels, but since Lester was forced to use a lot of the footage already shot by Donner (like, say, anything with Lex Luthor!), Superman II was destined to become somewhat of a Frankenstein’s Monster, cobbled together from two director’s competing visions (thankfully, WB never made that mistake again!).

At the time, though — 1981 — I didn’t see any of that. As much as I loved Superman: The Movie, Superman II unquestionably delivers what its youth-oriented audience wanted but didn’t quite get the first time around: the Man of Steel using his mighty powers to beat the living paste out of some bad guys who can handle it. And Great Rao does it deliver: Thanks to a brilliantly menacing yet comic turn by Terence Stamp as General Zod (who belongs on any Mount Rushmore of iconic movie villains), Superman is seemingly outmatched by the three Kryptonian bad guys, whose only concern is conquering (and, in Ursa’s case, collecting badges). 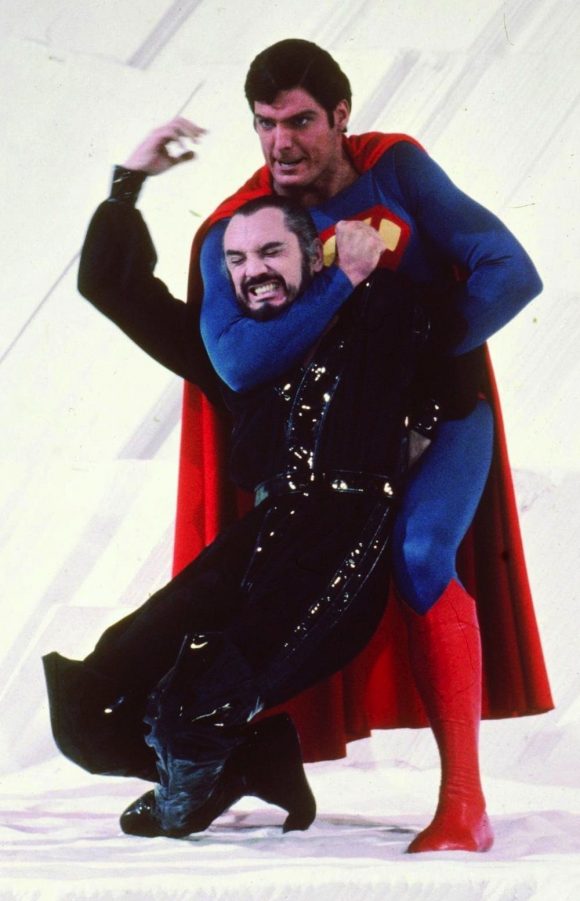 The Superman on display in Superman II is a just a wee bit cocky — he’s so concerned with romancing Lois Lane that he ignores the warnings of his Kryptonian ancestors (via videos on the Fortress of Solitude streaming channel) that while things seem rosy right now, you never know what might happen. For what was designed as a kids’ movie, we’re seeing actual character development here, as the Metropolis Marvel is laid low, both literally and figuratively.

It’s only after realizing that he can’t, in fact, have it all, that he decides to forgo lifelong happiness and decide to be Superman forever (leading to the moment that led off this piece).

All the actors from the first film who actually worked on the second — Christopher Reeve, of course, Margot Kidder, Marc McClure and Jackie Cooper — deliver solid performances, despite the discordant direction they were given. Gene Hackman is, once again, a riot as Lex Luthor, and it’s a testament to the work of film editor John Victor-Smith that Hackman’s scenes fit together, since as mentioned, he never shot a single frame for Lester’s Superman II.

It’s a fun turn, making Lex somewhat sympathetic by pairing him up with bad guys who maybe aren’t worse, exactly (Lex’s plan in the first movie was to, you know, nuke California and New Jersey — a notion that, as a resident of NJ, I both resent and completely understand), but are quite obviously much more sadistic. I already mentioned how great Stamp as Zod is, but Sarah Douglas also turns in a fine performance as Ursa, who treats humans the way that weird kid you knew down the street liked to torture bugs. While you get the sense nothing will ever be enough for Zod, Ursa gets off on inflicting pain, a kinky touch for what was, again, a film squarely aimed at kids.

Normally, this would be the point in my REEL RETRO CINEMA column where I would discuss the accompanying comic book adaptation of the film we’re analyzing. But due to a financially onerous stipulation in original screenwriter Mario Puzo’s contract, no comic book adaptations of Superman: The Movie or Superman II exist. This feels like a Mxyzptlk-ian prank when you consider that, thanks to Donner and his handpicked screenwriter Tom Mankiewicz, virtually nothing of Puzo’s original treatment made it into these films, and that, of all the films in the franchise, Superman II is most easily adaptable into comics form! 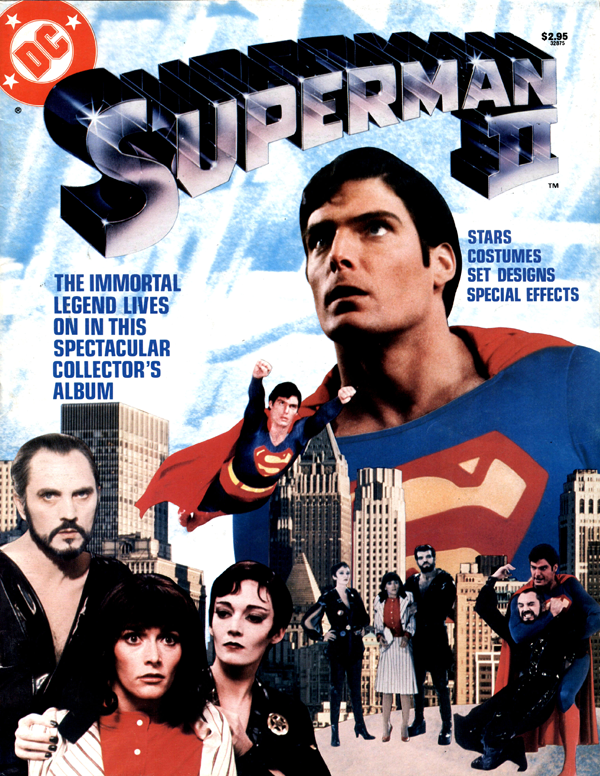 DC did release a Superman II “Collector’s Album” treasury edition, which I love, but even at this age I still mourn for what could have been.

(Speaking of weird formats, Superman II is one of only two movies I own on VideoDisc, a comically ungainly format that preceded laserdiscs. I have no way to play this heavy, sharp-edged monster, but I love having it anyway.) 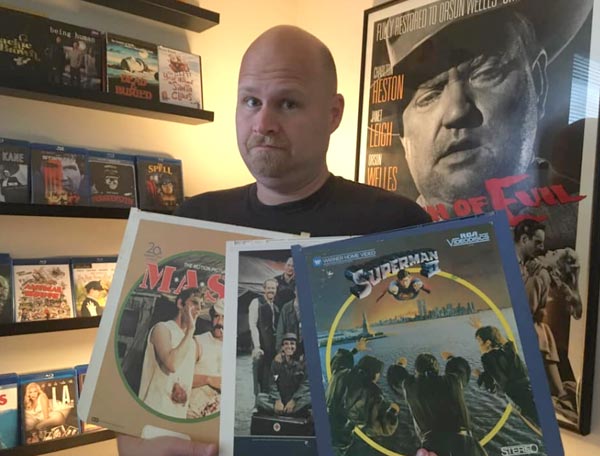 When I watch Superman II as what I laughingly call an adult, I see all the metaphorical splices — the beyond broad humor (some of the stuff during the destruction of Metropolis is so silly it makes the Batman TV show look like The Dark Knight Rises); the none-too-subtle body-and-voice dubbing of Hackman’s Luthor; the unceremonious removal of Ned Beatty (R.I.P.) and Valerie Perrine as Otis and Miss Tessmacher (respectively); and the fact that Jor-El is virtually absent from the proceedings. All of this had to do with contracts, intraoffice politics, and legal details that were a million miles away from what I was experiencing that sunny afternoon in June 1981.

Forty years later, I still adore Superman II. The flaws are even more obvious when you consider how the Superman film series would decline so rapidly after this, but the movie still gives the audience plenty of action, laughs, romance, hissable villains and, thanks to Reeve’s near-perfect embodiment of Superman, a beating heart. While Reeve died way too soon, he at least did live long enough to see how beloved he was in the role and how, to many many millions of people, he simply is, and always will be, Superman.

Rob Kelly is a podcaster and pop culture historian. He is the host/co-host of several shows on The Fire and Water Podcast Network, including Aquaman and Firestorm: The Fire and Water Podcast, Fade Out, TreasuryCast and Pod Dylan. He is also the co-host, with fellow 13th Dimension contributor Chris Franklin, of the Superman Movie Minute podcast, which examines the Christopher Reeve movies five minutes at a time. They deserve it.