A fitting, final entry to our Super-Star Holiday Special series:If you were a Batman fan in the Christmas season of 1969, you were given the best present of all: The great DC artist Neal Adams was going to start illustrating Batman in the pages of his own titles!

Adams had just completed a year-long run on the Batman team-up book, The Brave and the Bold, in which he redefined Batman as the “creature of the night” he was originally intended to be in the earliest years of his creation, but which had been all but forgotten by the time the ’66 Adam West TV series began, which buried the character under a mountain of camp clichés by the time it ended its network run in the spring of ’68. 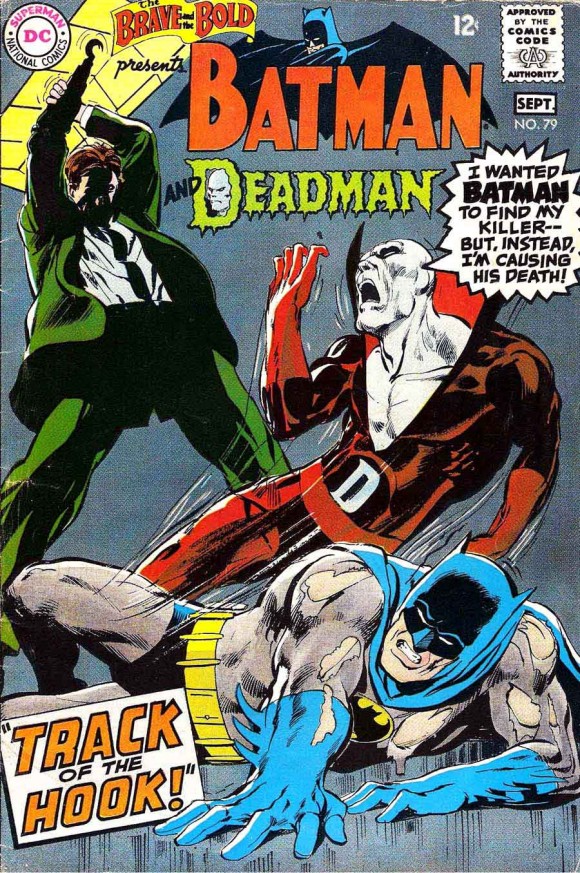 Bowing to the public pressure, Schwartz teamed Adams with DC’s best new writer, Denny O’Neil, and the two began a four-year run of Batman solo stories that rank among the greatest — some maintain the most definitive — in the character’s storied history.

But one of the first Batman solo stories Adams illustrated was not written by O’Neil, was not a book-length story but an eight-page backup, and yet remains one of the most unique, beautiful and memorable Batman stories of not just Adams’ formidable Batman career, but of the character’s, too.

And it’s a Christmas story, to boot. In 1969, there hadn’t been a special Christmas-themed Batman story for years; even the Batman annuals of the ‘60s didn’t reprint the ones that were done in the ‘40s and ‘50s. Eisner did some memorable Christmas stories in his magnum opus The Spirit, making them truly about “The spirit of Christmas,” but those wouldn’t be reprinted ‘til the ‘70s, and thus weren’t common knowledge to fans in ’69 born after Eisner ended publication in ’52.

And so “The Silent Night of the Batman” came as something of a surprise, a true gift to all Batman fans then, and to all students and lovers of great comic book storytelling since, because it’s proven to be the gift that has kept on giving, 44 years later. 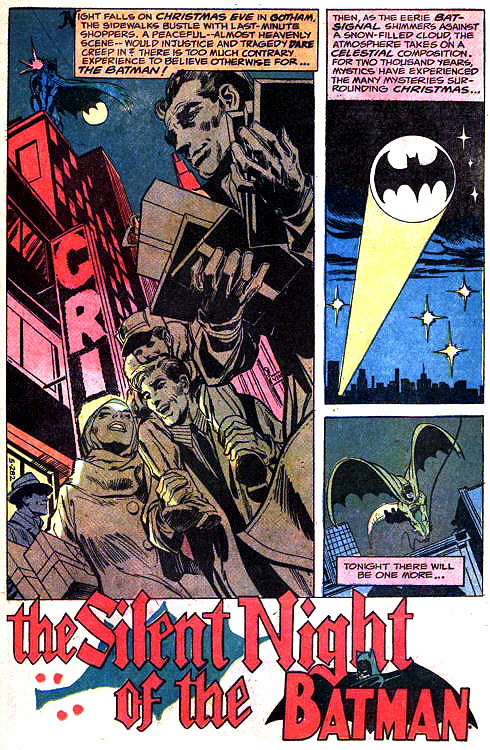 “Silent Night…” begins silently (foreshadowing the mostly-silent panels to come) with Adams’ splash panel perfectly staging the scene with a cinematic worm’s eye camera view isolating the lone, tiny figure of Batman perched at the top of a Gotham City department store on Christmas Eve, which, after the Bat-Signal is seen, he leaps off of to answer the call. 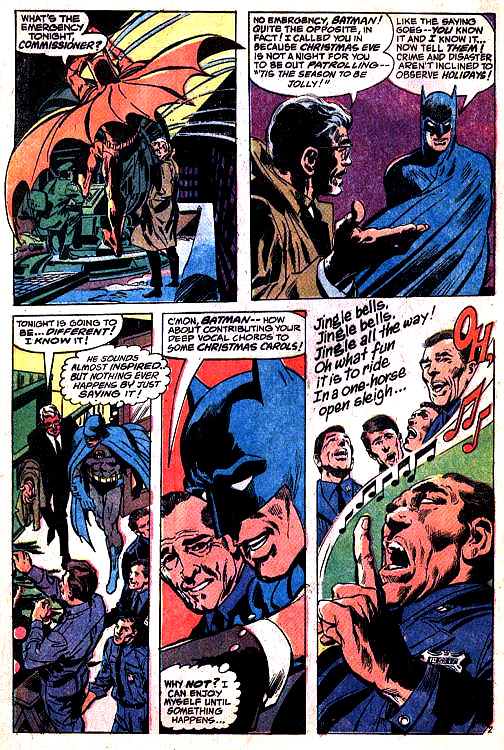 The Batman, this newly renovated ”creature of the night” singing Christmas carols? In Neal Adams’ realistically-rendered reality, all things are possible.

A gang of kid robbers steals a present, only to find it’s a Batman doll, and, feeling guilty for maybe the first time in their lives, rewraps it and gives it back; a gunman bumps into a blind, street corner Bat-Santa, and, also guilt-stricken, throws his gun into the garbage; and a woman, having just received a letter saying her husband fighting in Vietnam had been killed, decides to commit suicide by jumping off a bridge, but stops when she sees the shadow of the bridge’s towers cast on the water below as Batman’s bat-eared cowl—just as her husband pulls up behind her in an Army transport. 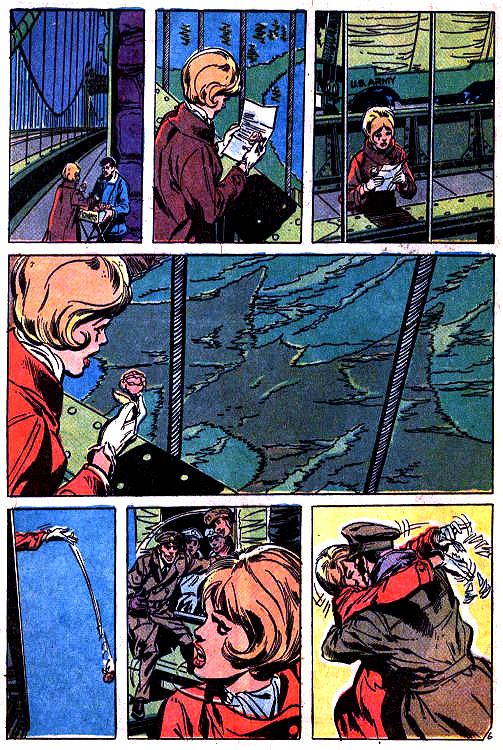 Adams’ visual acuity and trademark realism make these tableaux come alive like a silent film, imbuing this story with a timeless, fable-like quality, like the last act of Capra’s “It’s a Wonderful Life” in comic book form.

Though slight in quantity of pages, in quality “Silent Night …” ranks with the greatest of Adams’ early illustrated works that would go on to inspire the international graphic-design trade magazine Graphis to write in 1972, “An innovator in several ways, Neal Adams, juggling incessantly with his pictures to striking effect, remains the master of narrative technique.” 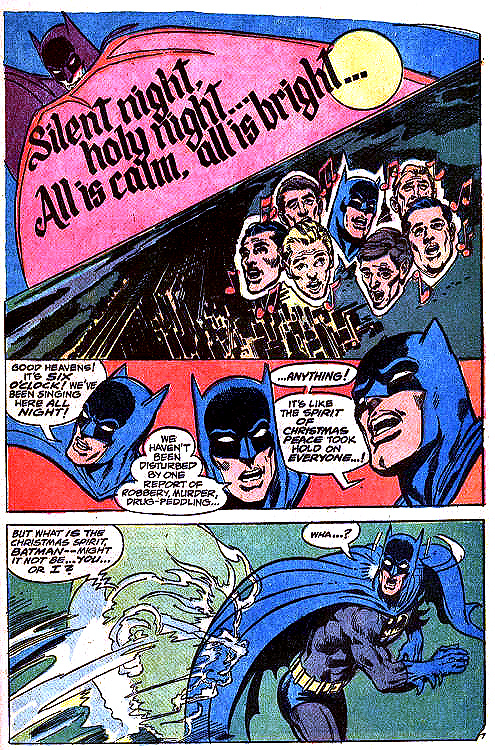 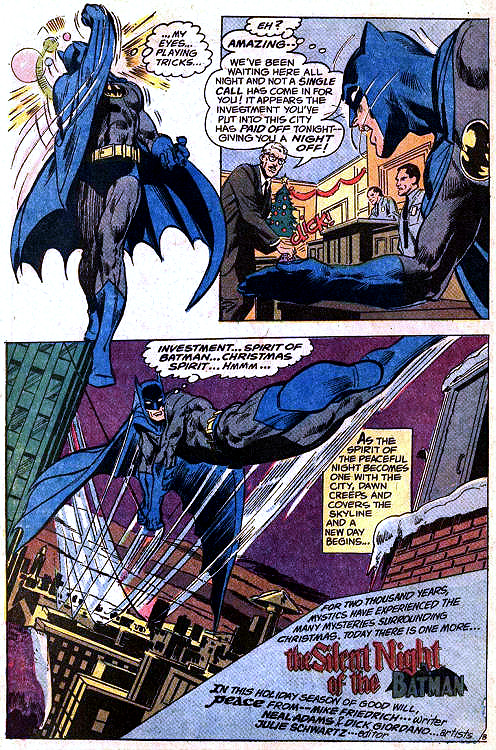 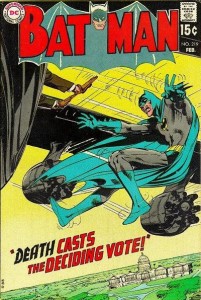 Historian Arlen Schumer is a writer, book designer and pop-culture maven. He is perhaps best known for the book, “The Silver Age of Comic Book Art,” (Collectors Press).

And for more holiday tales to warm your egg nog, check out these!