He had it his way.

Steve Ditko has died at the age of 90. Comics editor Mort Todd (Cracked, Charlton Neo) collaborated with the eccentric artist on a number of offbeat projects. Here’s a great story about an unexpected — and enlightening — visit at, of all places, Burger King. – Dan 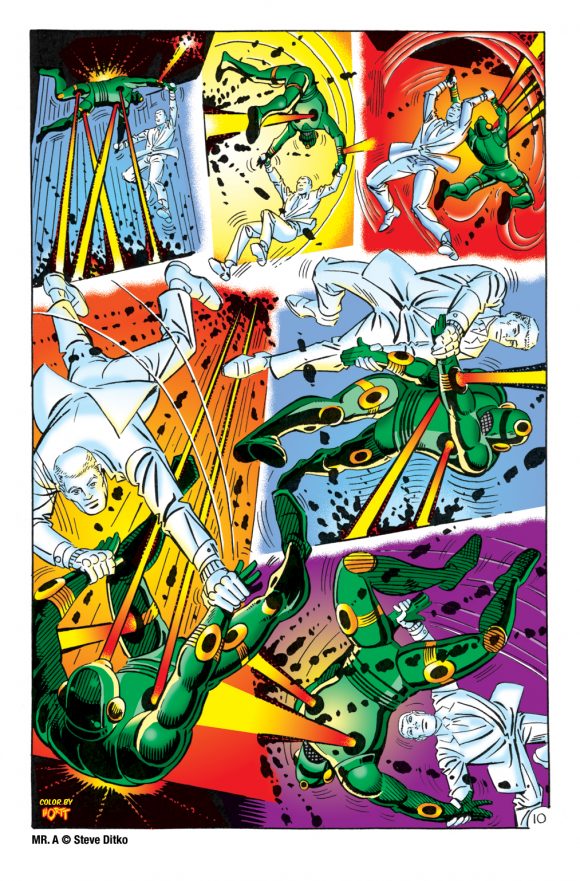 Steve Ditko was an unprecedented innovator that often gets painted as a loner crackpot. This certainly was not the guy I knew!

We socialized a bit and I was lucky enough to collaborate with him as writer, editor, colorist and even inker over the years at Cracked magazine, Marvel Comics and beyond. I even licensed his wild Mr. A character to develop as a TV show or movie without luck.

We planned a five-issue Mr. A mini-series that he finished, however the direct sales market at the time certainly didn’t embrace it and it wasn’t published then. Since then, Robin Snyder has published some of the stories in black and white as opposed to color as originally intentioned.

We kept in touch and more recently, I reprinted a Skyman comic I wrote for Ace Comics that he drew, printed alongside his pencils before they were inked by Rick Altergott. With his approval, I also colored a five-story collection of horror comics he did for my magazine Monsters Attack!

He had a long and prolific career that influenced the world of entertainment in ways few have! The following story – The Ditkoburger – was originally written for the fanzine Ditkomania in 2010. It gives some perspective of his influence on me and a day in Steve Ditko’s life! 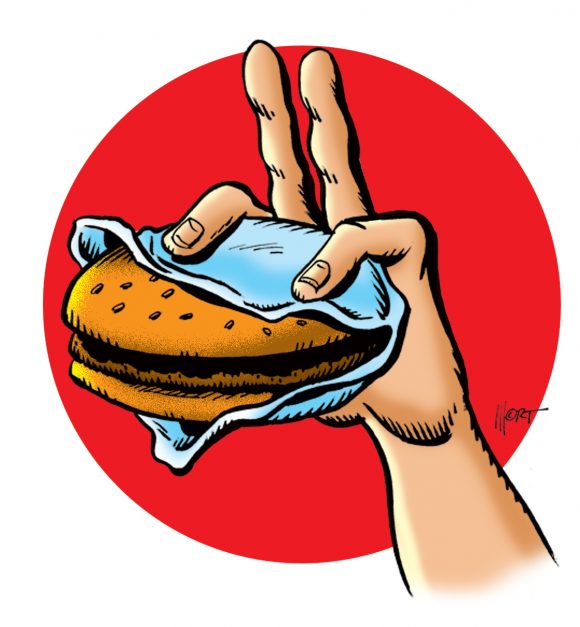 Like all of you, I am a comic fan… a comic geek, if you will. Not content to just read periodicals pertaining to the sequential arts, I forced myself into the comics industry at a fairly young age. I have had the extreme fortune to work with giants in the field, ranging from John Severin, Don Martin and Alex Toth to relative “newcomers” like Dan Clowes, Neil Gaiman and Peter Bagge.

However out of the hundreds of creators I’ve collaborated with, none has left the impression, both personally and professionally as… guess who? After all, you’re not reading a copy of Gaimania.

Having absorbed as many mainstream Ditko comics as I could find, by junior high I was reading his more idiosyncratic work like Avenging World. These releases made me consider world politics and other important issues for the first time.

A mere 10 years later, I had the awesome responsibility of being editor-in-chief of the world’s second most popular graphic humor magazine (that being Cracked) and with that great responsibility came great power. I was able to hire my favorite cartoonists and the first called was Steve Ditko! 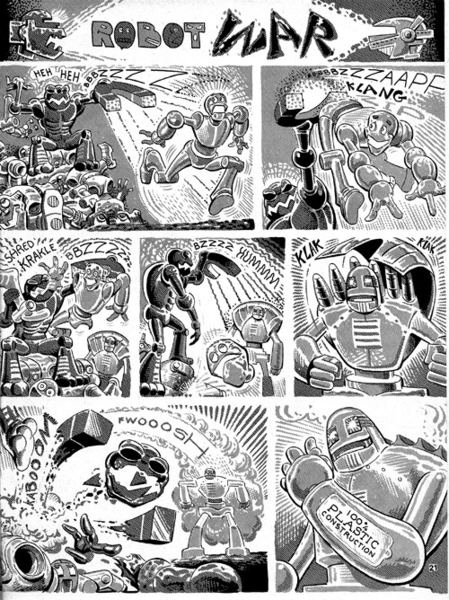 Ditko may not be known foremost as a humor cartoonist, even though a lot of his stuff is pretty dang funny. Laughs are constant in the Ditko mix, including his more recondite work. Steve became a contributor to Cracked and far from being limited by creating art for a black & white publication, he embraced the opportunity to explore ink techniques that he couldn’t do in color comics.

He played with the Duo-Shade graphic-tone paper for the Robot Wars strip and did a fantastic Thundercats parody in a wash tone similar to his earlier epics for Warren Publications. He also did his original art twice-up the printed size as opposed to the industry standard of one-third larger, the former allowing for tighter detail when reduced for reproduction.

His art studio was nearby, so Steve would often come visit the Cracked offices and we, along with my art director Cliff Mott, would talk for hours about topics ranging from comics and film to history and politics. It was one of the best parts of my job and I was happy to put off work to talk to Steve. I knew my priorities. 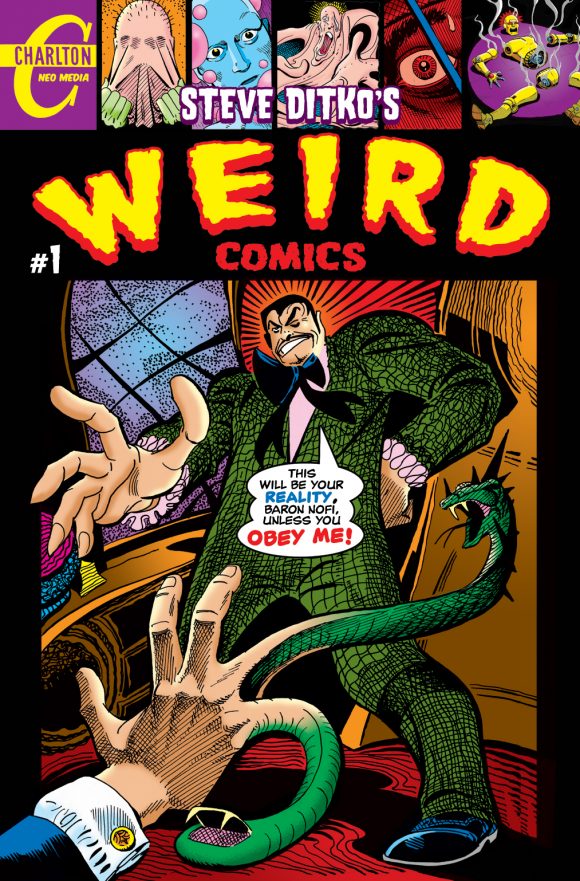 Cover to Steve Ditko’s Weird Comics #1, reprinting his work from Monsters Attack! magazine in color for the first time, from Charlton Neo.

On one fine day, Cliff and I were wondering what to do for lunch. We usually took hours-long liquid lunches loaded with Mad Man-esque bacchanalia in the bistros of Manhattan, but today I wanted to go to Burger King. They were having a Batman promotion, with a cup boasting a figure molded from an iconic Carmine Infantino pose.

I got my coveted Batman cup and we decided to eat there instead of hauling the vittles back to the office. The King’s ground floor was packed so we went upstairs in search of a seat, where the pickings were still slim. There were hardly any seats and a gentleman motioned us over. It was none other than Steve Ditko having a burger and a coffee.

Not wanting to bother him, we gave our salutations and were going to find another table. He told us to have a seat and I knew he would not invite us altruistically. I had been to his studio a few times and there was only one seat there — his, so as, perhaps, not to encourage visitors. His studio was quartered above a popular gourmet burger joint, Hamburger Harry’s, although Steve’s tastes apparently veer more towards a Burger King burger rather than Harry’s blue cheese avocado salsa burger at five times the price. 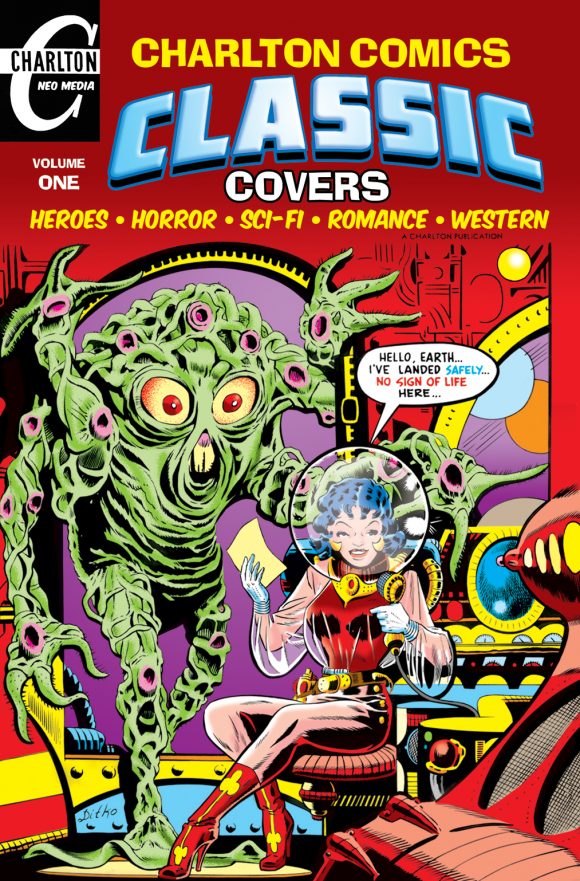 As we conversed, I noticed a figure looming over us.

“Are you Steve Ditko?” a gangly long hair asked.

Steve uncomfortably answered in the affirmative and the guy introduced himself as a former Marvel editor, and a big fan. He continued to hover as he peppered Steve with all kinds of geeky, fanboy questions. I was a geeky fanboy too except I learned that in meeting your personal heroes it goes better when you treat them like a fellow human, no matter how freaked out you are about the encounter.

The Marveloid wasn’t offered a seat and persisted to blab on. It is no wonder Steve may have a skewed view of his fanatic followers. A variety of cartoonists have told me of their pilgrimage to Steve’s studio only to have the door slammed in their collective faces. (I saw the above editor last year at the San Diego Con and he said it was a big deal for him. Anyhow he remembered Steve talking with a particular Marvel/DC editor, not me.) 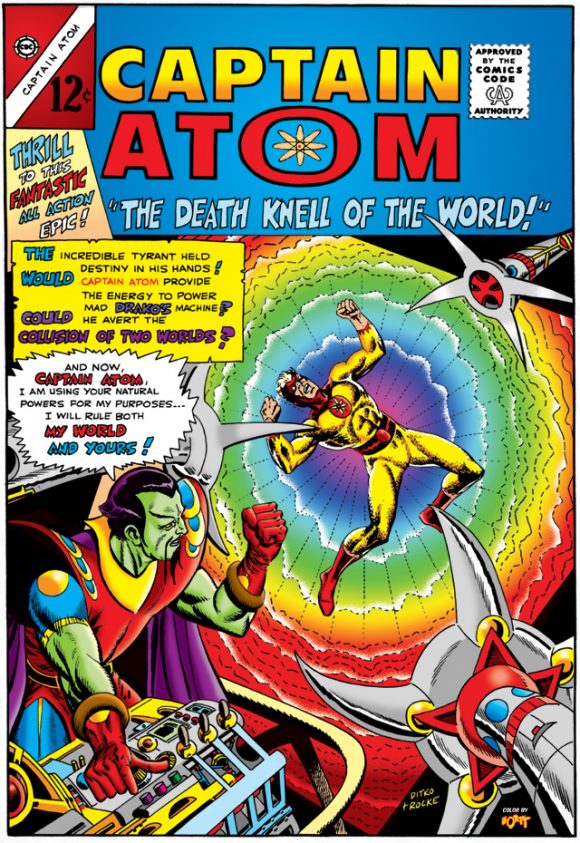 One thing I noticed at the Burger King luncheon changed my life forever: Steve ate the burger with the wrapper around it. Growing up in a post-fast food world, I never did nor does the majority from, or after, my generation employ the wrapper in that manner. Obviously, that’s one of its functions, to keep the burger grease off your fingers. It might not seem like a revelation, yet it was to me, and reflects Steve’s common-sense approach to things.

I was perpetually impressed by Steve’s standards, which would manifest in all aspects of his work. Not only in storytelling, but like the fact that Steve never drew bellbottoms on his characters. Or when we were talking about doing some Mr. A merchandise he was still a little puzzled that people would wear T-shirts (even emblazoned with Mr. A) as outerwear.

Ever since that repast, I always eat my burger while protecting my digits with the wrapper. I look around and see that nobody else does… except maybe a spattering of seniors.

I predict, much like the Seinfeld episode where people started cutting Snickers bars with a knife, the practice of eating a burger Ditko-style will sweep the Ditkomania audience who’ll wanna eat their burgers like Steve does! 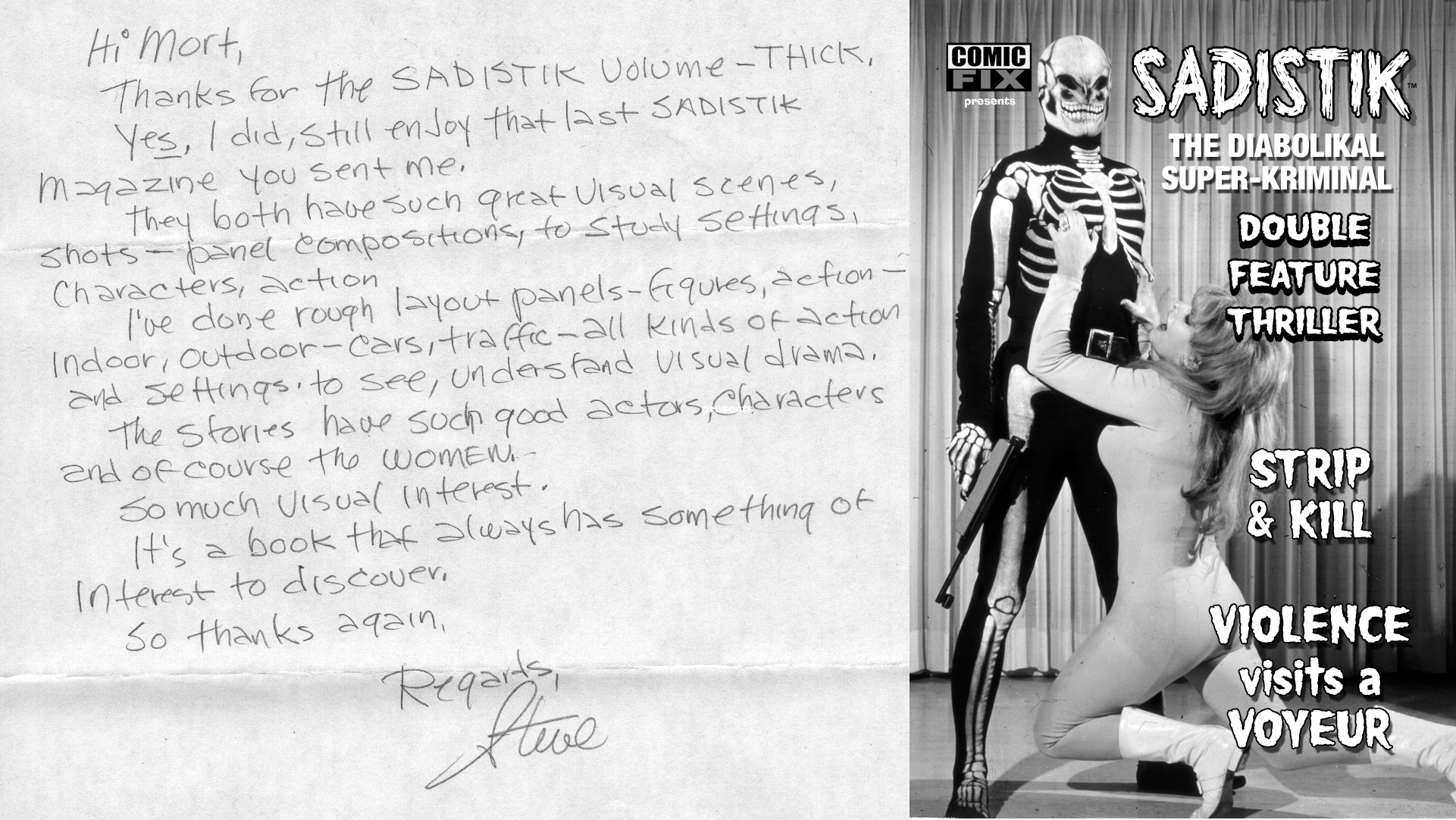 A recent letter from Steve Ditko to Mort Todd about how the Sadistik photo novels inspired him to sketch from them.

Ditkomania is a long-running fanzine about the master of the comic arts. Back-issue and future-release information is available on their Facebook page.

Mort Todd has had a career in comics, film, video, music and animation and is currently spearheading Charlton Neo, a revitalization of the classic Charlton Comics line with veteran and rising comic talent, along with vintage reprints (including a few rare Ditko comics). See more at www.morttodd.com and on Facebook.