Steve Mannion combines cheesecake girlie poses, monsters, zombies, martians, and nazis with a style that sprinkles bits of Al Capp, Wallace Wood, Frank Frazetta, Jack Kirby, Dave Stevens, and a dozen other dearly departed masters of the medium to create his own style in the pages of Fearless Dawn.

I’m seeing Fearless Dawn around a lot lately, how long have you been putting out the book? How many issues?

Fearless Dawn has been flowing since 2005. First, Bomb 1-4 and swimsuit issue… and in it’s latest incarnation, Fearless Dawn, 9 issues I think. 1-4,…swamp one shot,… space one shot,… Jungle boogie,… Hard Times, and the latest, Eye of the Beholder. Whew! 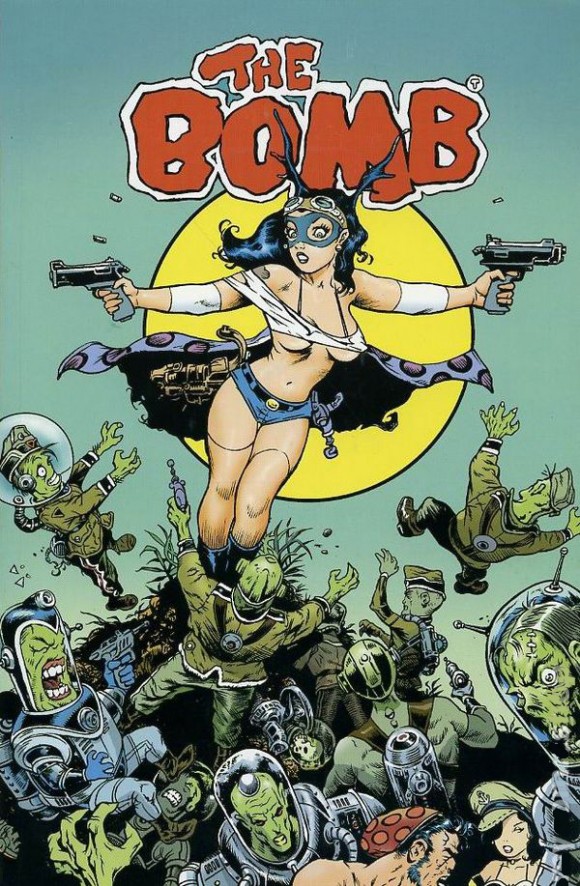 The Bomb Issue #1 by Steve Mannion

Fearless Dawn is always fighting Nazis — what’ve you got against Nazis?

LOL! Honestly, It’s a clear icon for my simple storytelling palette. And I knew the gear from my childhood building army models and looking at Joe Kubert covers. So…write what you know? Side note: Do you know that Hitler had all that stuff designed to look cool so the kids would dig it? And they did. Sadly. 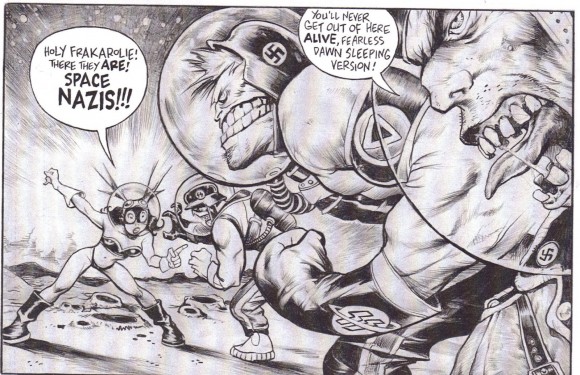 So you built your Revell models, and studied the whole World War II  angle, where did Dawn come in? What’s the deal with thing on her head? 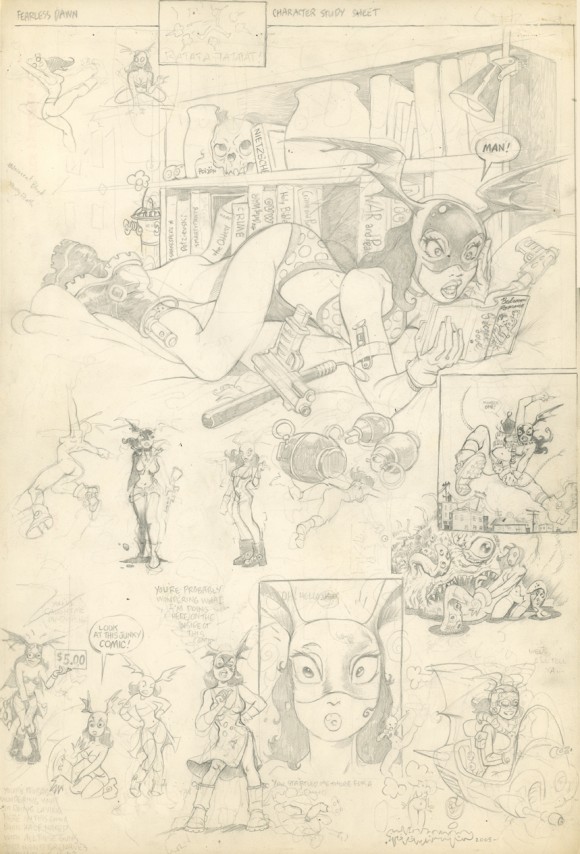 Ha! Some fellow on Deviantart called them “Moose Elks” so I went with that. I dunno, she was an amalgam of Catwoman, Batman, Lobo, and all the Dave Stevens art I was seeing. That cover of those 2 chicks on the rocket zooming over the monster hands? Planet Comics I think. I was like “Man I want to see a comic about shit like this.” 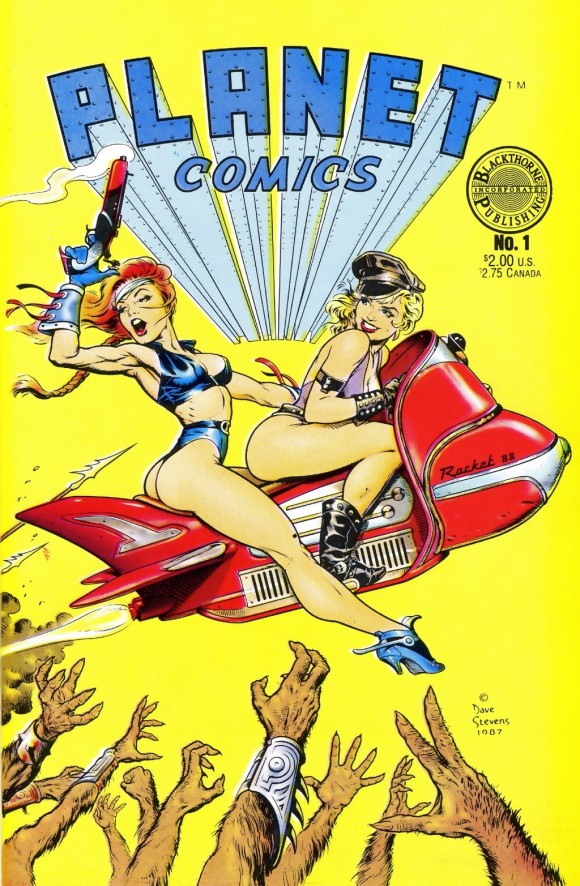 That’s it! Blame that image for Fearless Dawn!

Yeah —  back around ’89, my buddy in San Clemente had that poster in his studio and I used to stare at it and say “How can that fucker be so good?”

Right? That was some top notch comic art.

You make the whole book yourself, correct? You write, draw, ink, and color it don’t you?

What do you  use, old school brush and ink? Markers?

Everything. If the paper’s not bleeding, I like to use those dip pens. If it’s sketchy, microns, lotta brush, rapidograph.

How’d you get started in this racket? Didn’t you work for DC years ago?

Yeah, I got serious around ‘95 and tried to do my best work. Got hired for the DC bullpen on my lettering thru contact at the Kubert school.

Also did an Eros/Fantagraphics job about the same time. I was all nervous, conflicts of interest stuff. LOL. Editors at DC were laughing at my filth. I think one guy bought a page. There was a little moonlighting with everyone I guess. As long as you got your work done and you didn’t moonlight for Marvel I don’t think they were really that concerned. DC was good to me.

So how long were you at DC?

What did you do afterward? Still did comics?

Yeah-I did odd jobs, DC Big Books,  A Captain America story, A Detective Comics story (753), a Batman B&W story. Pearson Education/Prentice Hall became a client.  I didn’t really pursue comics for a few years after that. They were giving me a lot of work.

Then things got kinda lean. I started ebaying all my Batman pages and stuff. I noticed pictures of sexy super heroes did well so I drew some and ebayed them. And so Fearless Dawn was kinda born out of ebay also. Little shows. A little bit bigger  shows, I got the Bomb done and was ebaying that, brought it to the shows. Atom Bomb Comics. One fan at a time!.

I noticed a while back there was picture of you at a con in San Jose and you’re flanked by two cute girls dressed as your characters. That’s gotta be a strange experience. 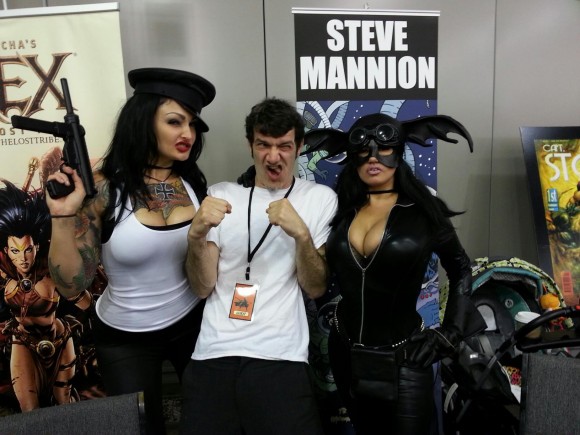 Yeah, it was pretty cool coming from struggling on ebay trying to sell issue #2, to folks getting into it at that level. Kinda humbling. We had dinner with Loretta (Fearless Dawn) and Alyssa (Helga) that night at a 50’s themed diner out there. They came down from their hotel rooms still fully decked out in that regalia. I was like “You’re gonna wear that stuff over there?!?  They were all,”HELL yeah!”  What a crew! 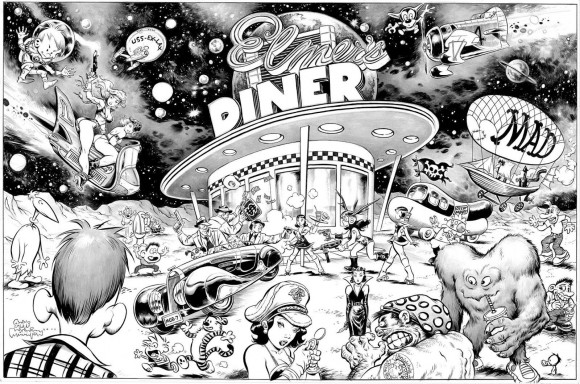 The diner from the mind (and pen) of Steve Mannion.

So what happens next for Fearless Dawn or her creator?

I take it day by day, there’s this Kickstarter and all that work, and a really harsh Helga’s story I wanna tell. Real drama baby.  I just wanna draw a really cool comic. It’s challenging to me.

As Steve mentioned, he has a Kickstarter going for his new book Eye of the Beholder. http://www.kickstarter.com/projects/stevenmannion/fearless-dawn-eye-of-the-beholder-comic-book . 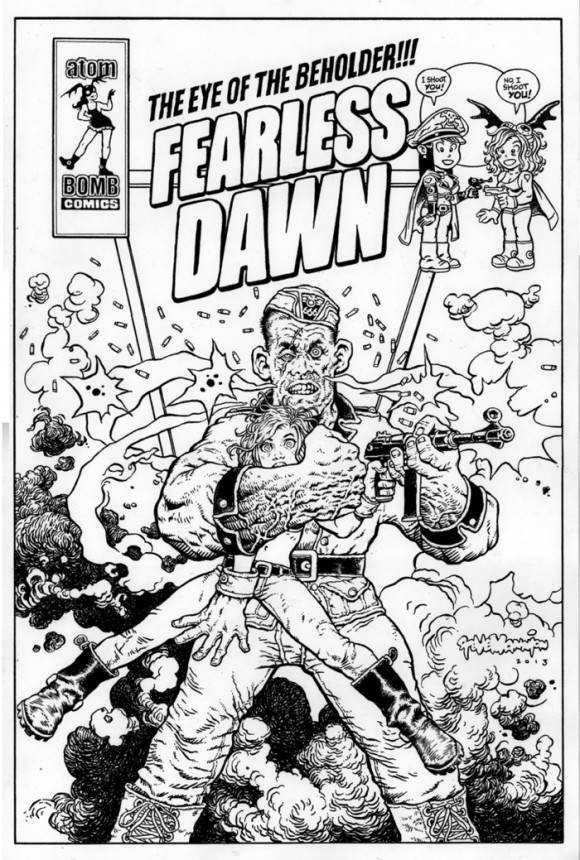 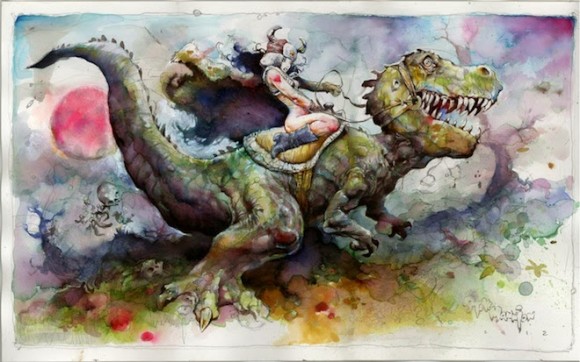