Historian Craig Yoe has a fascinating perspective on Steve Ditko, who has died at the age of 90.

Who had as much effect on my young life as Steve Ditko?

Actually, there were a number of people— my father, the Beatles, my Boy Scout leader, my best friends David and Linus, musician Carlos Suris who sang and talked to me about Christ, and the late-night TV horror host, Ghoulardi.

But Steve was the visual artist of the bunch and being an artist or trying to be one (or at least associating with artists) has defined my career. So, I owe Steve Ditko tremendously much.

I grew up as a young kid loving comics. I assumed they weren’t created by mere mortals but by gods like Walt Disney. In my adolescence, though, I discovered the early issues of Spider-Man and understood, because of Stan Lee’s revealing and entertaining ballyhooing of his and Ditko’s comics, that they were drawn by a flesh-and-blood person.

This was at the period of time when my peers and I were supposed to start seriously thinking about what we wanted to be when we grew up. I didn’t want to be a what but a who—Steve Ditko. I wanted to draw with unabashed style, with a relatable humanity and at the same time create amazing fantasies. 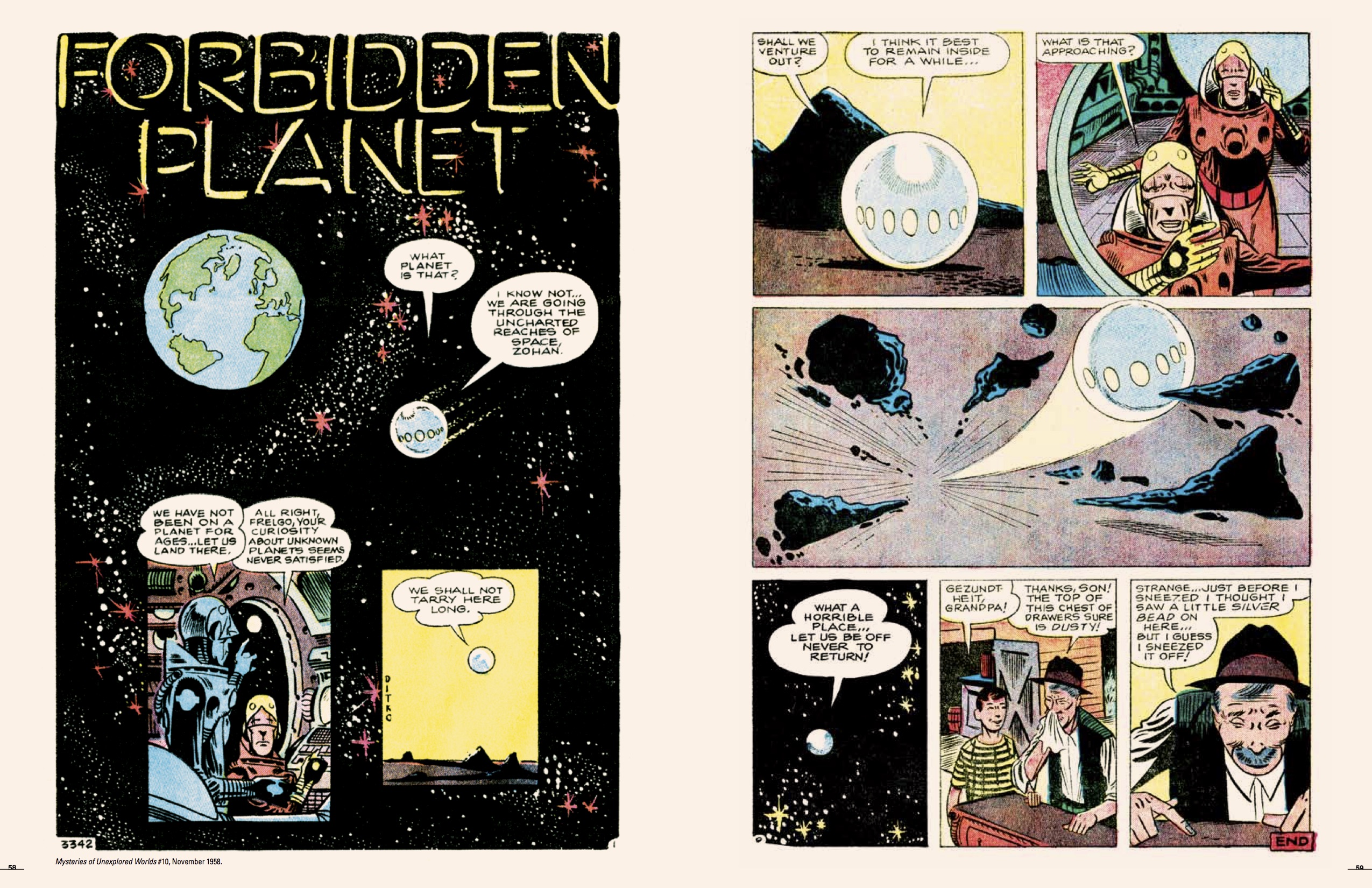 So I dove into comics fandom and the world of fanzines. I even created a superhero for a zine called Wonderment where every pose and panel was swiped from my hero. I never became Steve Ditko or even made a living as a comic book artist. I tragically failed and became instead a creative director for Disney, Nickelodeon, and for Jim Henson and his Muppets.

But I had a Hoary Host of Hoggoth moment and realized that the latter position gave me the opportunity to just maybe meet my idol.

I somewhat nervously phoned Ditko and invited him over for lunch and a tour of the Muppet Creature Shop. He nicely agreed! Our receptionist in the lobby of the grand, old four-story uptown Victorian that housed Muppet headquarters buzzed me that a Mr. Steve Ditko was there to see me.

I walked down the grand spiral staircase to find Ditko sitting in the theater chairs positioned to make the waiting person look like they were sitting in the front row of a Muppet Theater. Muralized Kermie, Piggy, Animal and the whole crew were peering over Steve Ditko’s shoulder. The fantastic denizens assembled, including the artist, were all looking at me. I ignored the others and excitedly greeted Spider-Man’s artist creator…. STEVE DITKO! We walked around the corner for lunch. Conversation was difficult. Ditko was not unfriendly but offered terse answers to any questions I brought forth about how he liked the weather or the food or about his philosophy about creativity. After a few tries I began to see that any inquiry or opinion I myself made was met with quiet, some rigid, some disagreeable responses no matter what the topic. I wanted to be respectful, of course, but I was increasingly uncomfortable and found myself glad when Ditko passed on dessert!

Instead of pie we soon made our way to a third location, the nearby Muppet Creature Shop. There Steve seemed relaxed and relatable as HE opened up with soft-spoken but eager questions about how the Muppet puppets were made. His enthusiastic curiosity about the Muppets creativity was sincere and refreshing. Steve was enjoying himself and I was relieved.

In my mind, the environment at the disheveled Creature Shop with all of the creature parts, exotic feathers, gizmos, large eyeballs, fantastic sculptures, and more was like some scene Steve might have drawn for the pre-superhero Strange Tales comic book, so maybe Ditko, himself a creature creator, felt more at home.

Time flew and it was now quickly time to go back to the Victorian mansion/offices in order to have Steve Ditko and Jim Henson meet each other. I honestly don’t think the two were all that aware of each other’s contributions to art and culture.

I was, however, never more thrilled than when I introduced the creative titans and witnessed the magical hand that brought Kermit the Frog to life and the wizardly hand that created the art of Dr. Strange clasp!

Just last week I ran across a thoughtful thank-you letter Steve sent me after his visit to Muppet headquarters. This kind gesture felt natural and not a big deal. I even had casually written a daily to-do list on the small blank space at the bottom of Steve’s note. (Yes, dumb!) I sensed we were somehow sort of becoming friends. Steve, in fact, invited me to visit his studio, which I did go to a few days later.

Steve’s studio near Broadway was surprisingly dark and no bigger than a small walk-in closet. The thin comic-book artist squeezed behind his drawing board and sat on the one well-worn chair in his digs. With his expressive hands he motioned me to sit on a tall stack of what looked like fanzines on the floor. At a glance I realized they were simply produced, amateur-looking propaganda from Objectivist true believers.

We had a pleasant visit but I wondered about what looked like many bundles of original art wrapped in brown paper on the dusty shelves. I didn’t inquire, though, as Ditko gave off the vibe that asking about such things might be considered an invasion of privacy. 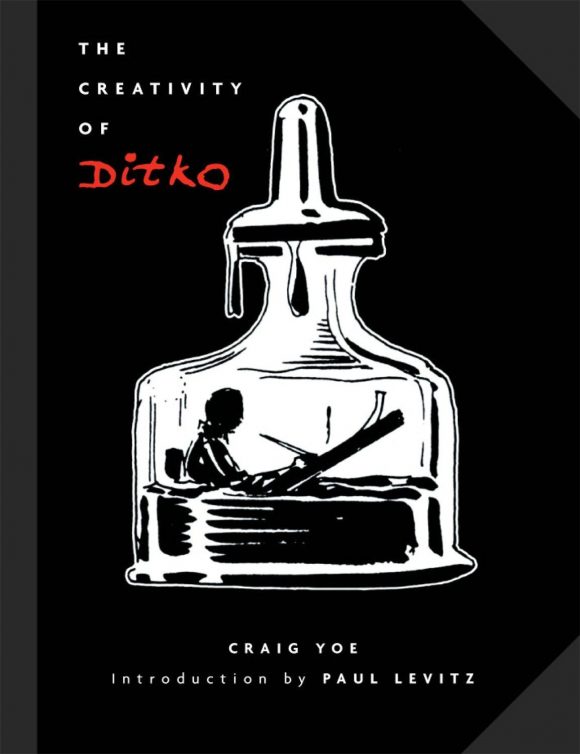 After the mutual visits we kept in touch. When Jim suddenly passed and I decided to move on from the Muppets and start my own operation, I asked Steve to pencil an issue of Big Boy Comics. Yoe Studio produced this promotional comic that Stan Lee had started in the 1950s for the hamburger restaurant chain. Steve happily accepted the assignment.

Ditko appeared to very much like the idea of drawing in a humorous animation-type style. His awe-inspiring pencils showed a master storyteller at work as did everything he ever did from his first assignments in comics to his last efforts with his publishing partner Robin Snyder.

About six years ago I was asked by Greg Goldstein to start an imprint, Yoe Books, for IDW. I knew my first book had to be a tribute to the guy that inspired me to become a designer and artist in the first place. I called Steve to see if he would help me select stories for such a book. I told him I wanted to pay him for the use of the material I was reprinting and would love his close involvement in selecting the stories. 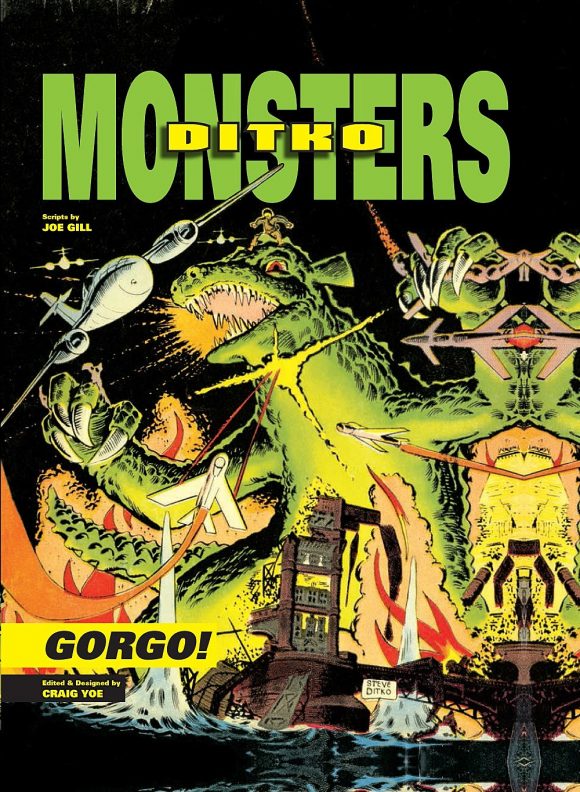 Steve with no hesitation begged off on all aspects, gently but firmly insisting that he didn’t own the comics from Charlton Publishing that I was reprinting and wouldn’t accept any payment whatsoever. He humorously yet quite forthrightly told me if I wanted advice I should see a priest. He did wish me the best.

I was a little upset by Steve’s total lack of any interest in the project but Paul Levitz, who knew and had worked with Steve as the publisher of DC Comics, told me later that this was just Ditko’s way. Paul assured me that Ditko was just being honest and I shouldn’t take anything personally.

Steve and I still kept in touch, mostly through letters. I remember one he sent one mid-December that shocked me a bit, it seemed so uncharacteristic. He warmly wrote to me about how he very much loved the snow, the sights, and the sounds of Christmas. Steve opined that it was his favorite time of year. The “Miracle of the Holidays,” I guess. 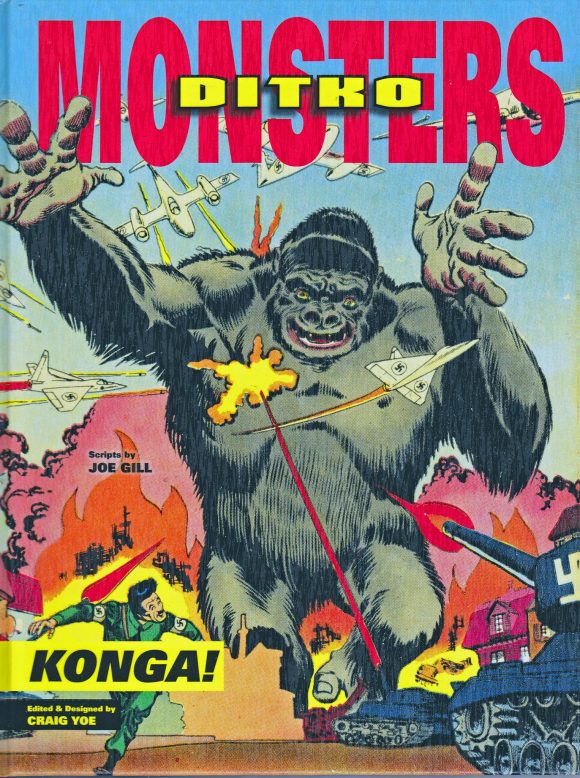 The resulting book, The Art of Ditko (with an intro by Stan Lee extolling his stated co-creator’s brilliance) was followed by The Creativity of Ditko. (Levitz wrote the intro to that one with Ditko’s expressed blessings). I did more Ditko books—Ditko Monsters: Gorgo and Ditko Monsters: Konga.

Then we published Ditko’s Shorts (a book I did with Mark Knox of Steve’s 1-, 2-, and 3-pagers that showed off his stunning storytelling chops).

All along, I continued to offer Steve involvement of any kind, monetary or editorial or otherwise. He assured me he absolutely wanted nothing of the sort, but told me, “Keep doing what you’re doing!” 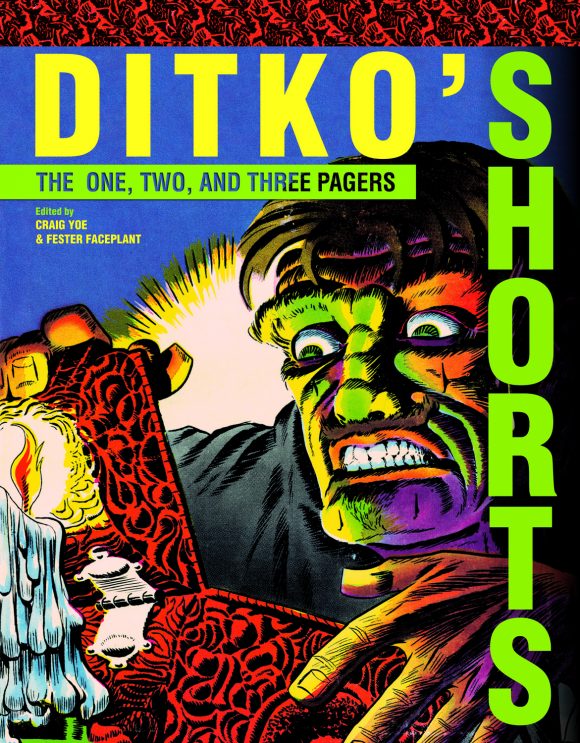 I have kept doing such and even yesterday when I heard the news of Steve’s passing, I was finishing up a new book composed primarily of some of my inspiration’s stunning stories.

Speaking of stories, I always was a little wistful whenever I came to the last panel of a comic-book tale illustrated by Steve and found the words “The End.” I could never get enough of the masterful artist’s work. Now those words apply to the life of the unique genius who will never again thrill us with another new line of ink. 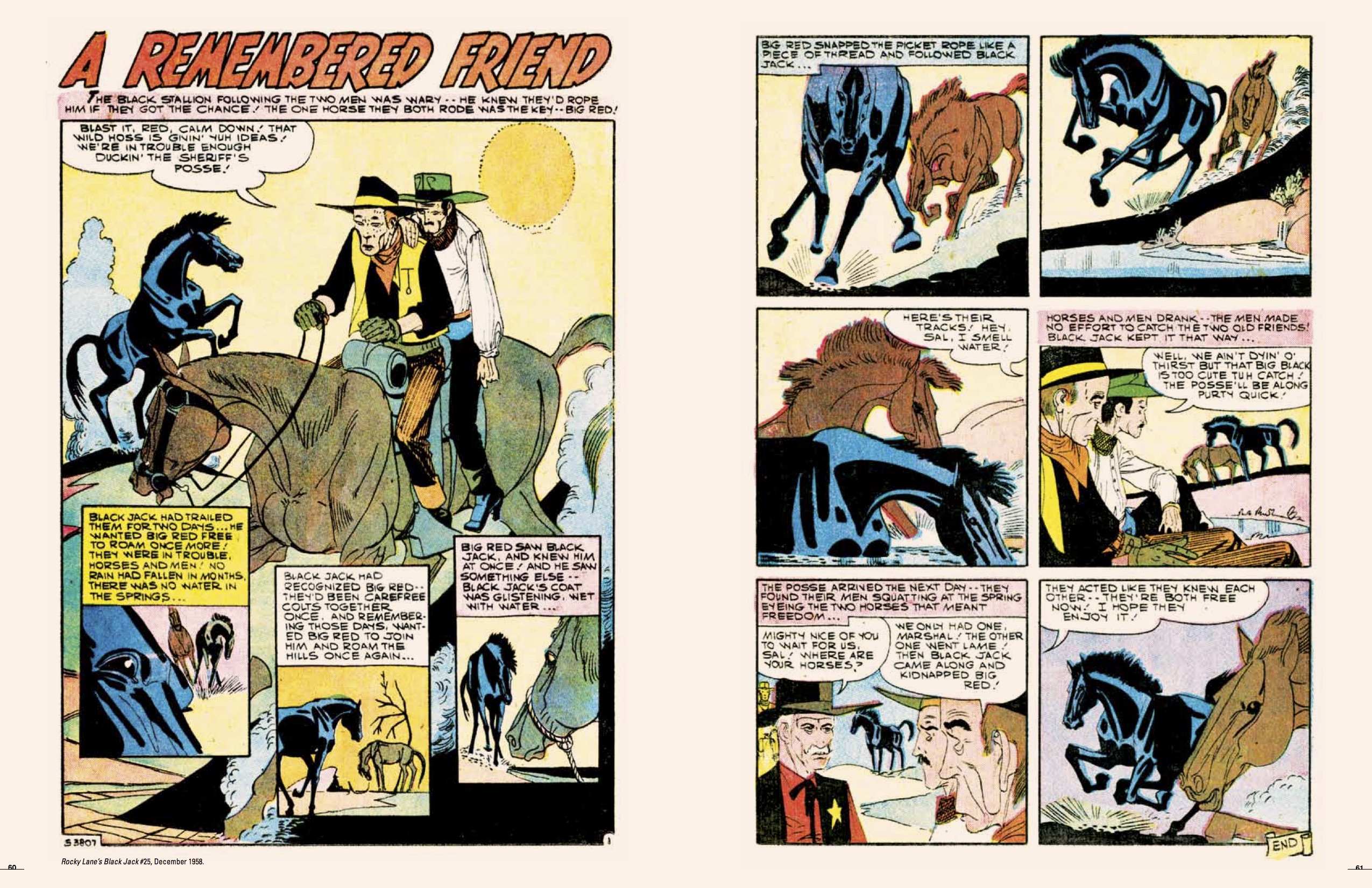