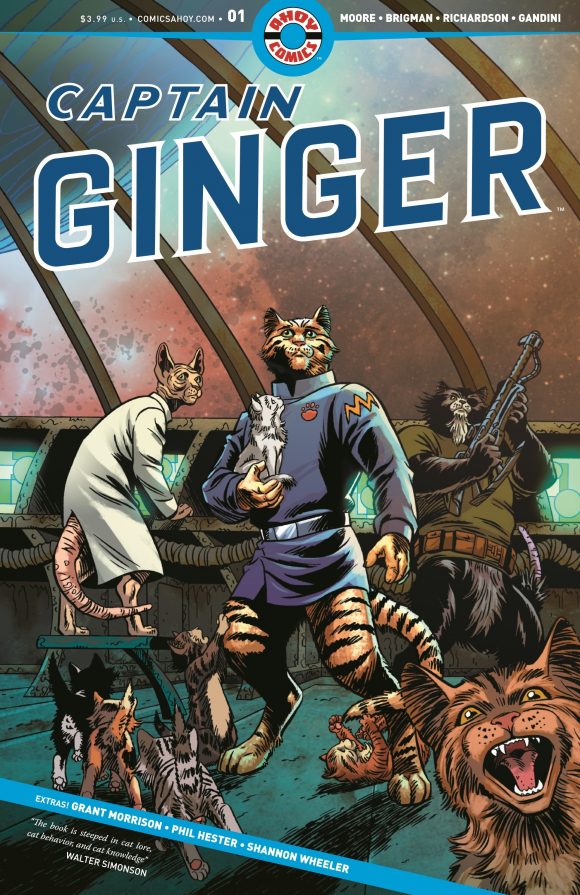 AHOY Comics’ next big launch is Wednesday (10/17): Captain Ginger, a space-faring adventure starring a bunch of cats, written by Stuart Moore, with art by June Brigman, Roy Richardson and Veronica Gandini. Plus there are extras by Grant Morrison, Phil Hester and Shannon Wheeler.

Crazy, right? So crazy that Moore is here with a list of 13 CRAZY SPACE OPERA COMICS SERIES. 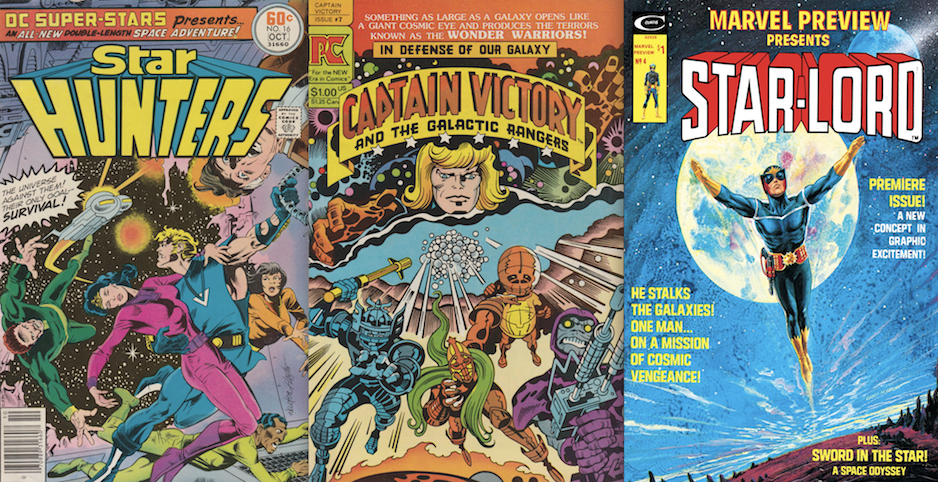 My name is Stuart Moore. You may remember me from the credit boxes of such books as John Finkelstein, Sunblocker; Dadpool the Dork; and Firestorm the Unclear Man. My latest comic is called Captain Ginger, and it’s coming this month from brand-new publisher AHOY Comics. It’s a space adventure with a crazy twist: The starship’s crew are all cats.

So 13th Dimension asked me for a list of 13 other crazy space operas. In comics, of course. At first, I wasn’t sure if I could fill out the list. By the time I was finished rifling through my shelves—and my memory—I had more than I could use.

A few notes: I’ve ruled out superhero stories, even though some of them had wonderful cosmic sequences. The Legion of Super-Heroes comes to mind, particularly the work of Edmond Hamilton; the Earthwar saga (just reissued as part of a new hardcover volume from DC); the Levitz/Giffen run, of course; and the work of Dan Abnett, Andy Lanning, and their various collaborators. The X-Men have also seen some spectacular space action, particularly under Chris Claremont, David Cockrum and John Byrne. (See below for a related project.)

Most of the books on this list, I should also note, are from the ’70s and ’80s. There’s been a lot of science fiction in comics lately, particularly at Image—my own book EGOs is only one example—but very little of it qualifies as space adventure. I’ll also admit to a soft spot for the trippy, psychedelic, black-light-influenced graphics of the ’70s.

You’ll also note that a ridiculous number of these books have the word STAR in the title. That was practically required, back in the days of the original mumbletrek and mutterwars. It was a simpler time.

1. Star Hunters, by David Michelinie and various artists. We start off with a forgotten classic: an ambitious venture from DC’s mid-’70s boom, featuring a team of reluctant cosmonauts forced into outer space by an evil corporation to find a mysterious object called the Sornaii Artifact. If they return to Earth, the serum they’ve been injected with will kill them before you can say “Jar Jar Binks.” (Not that you would.) 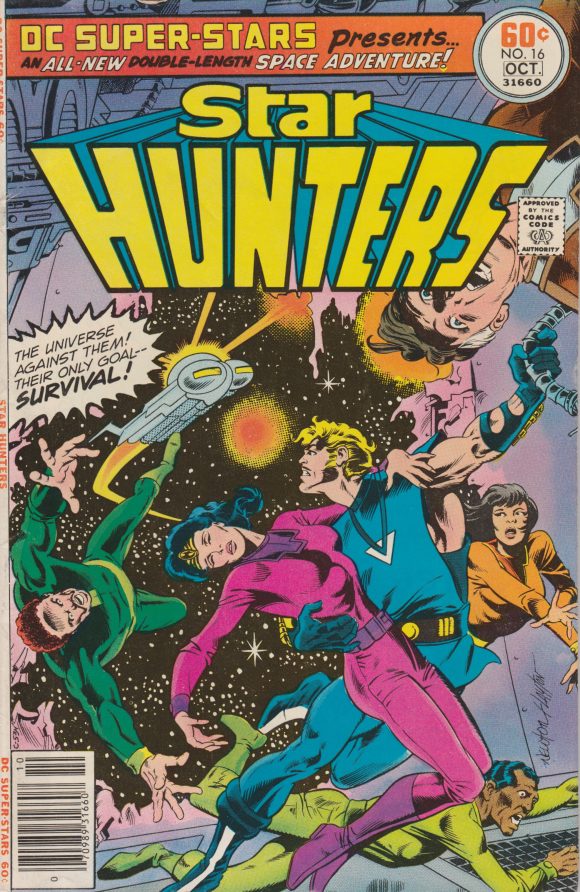 Star Hunters is dated in a lot of ways—the “Irish” accent sported by Donovan Flint, the main character, hasn’t worn too well. And the low page counts of ’70s comics mean that a lot of issues featured 15 pages of fighting and two pages, at best, of plot and characterization. But it was a twisty-turny ride, full of surprises. In the first five issues, the group finds the artifact shockingly fast, loses their ship, and the main character dies—for a while, anyway. That qualifies as crazy, doesn’t it? 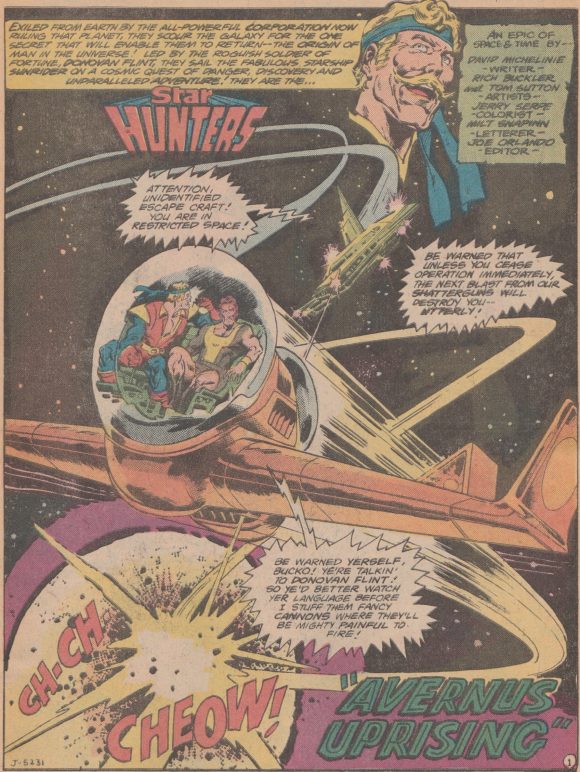 This book seems to have been forgotten completely—it’s not even available on ComiXology. Maybe that’s because it was cancelled suddenly, in the DC Implosion of ’78, before its plotlines could be wrapped up. It might have been just as well: Writer/creator David Michelinie was already off to Marvel, to make history on Iron Man.

2. Star-Lord. You know lovable butthead Peter Quill from some of the most phenomenally popular movies of all time. But back in the day, he was a very different character. Steve Englehart and Steve Gan created a tortured, astrology-based orphan hero in Marvel Preview #4, in the first of a projected series of stories that would span the solar system, each focusing on a different planet. 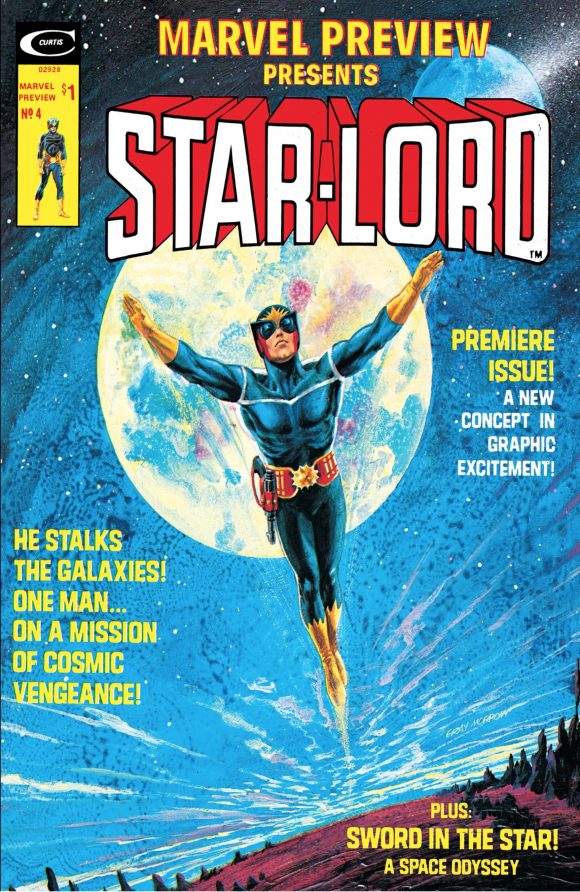 Englehart wound up walking a different path, and it’s the second Star-Lord story that’s best remembered by fans of the time — as one of the most exquisite early team-ups of writer Chris Claremont and artists John Byrne and Terry Austin, who joined Claremont soon after on X-Men. You couldn’t ask for two different stories, in tone and mood, than the Englehart and Claremont Star-Lords. But both of them took advantage of the expansive canvas of Marvel’s black-and-white magazines to build a widescreen portrait of a character whose importance is still felt today. 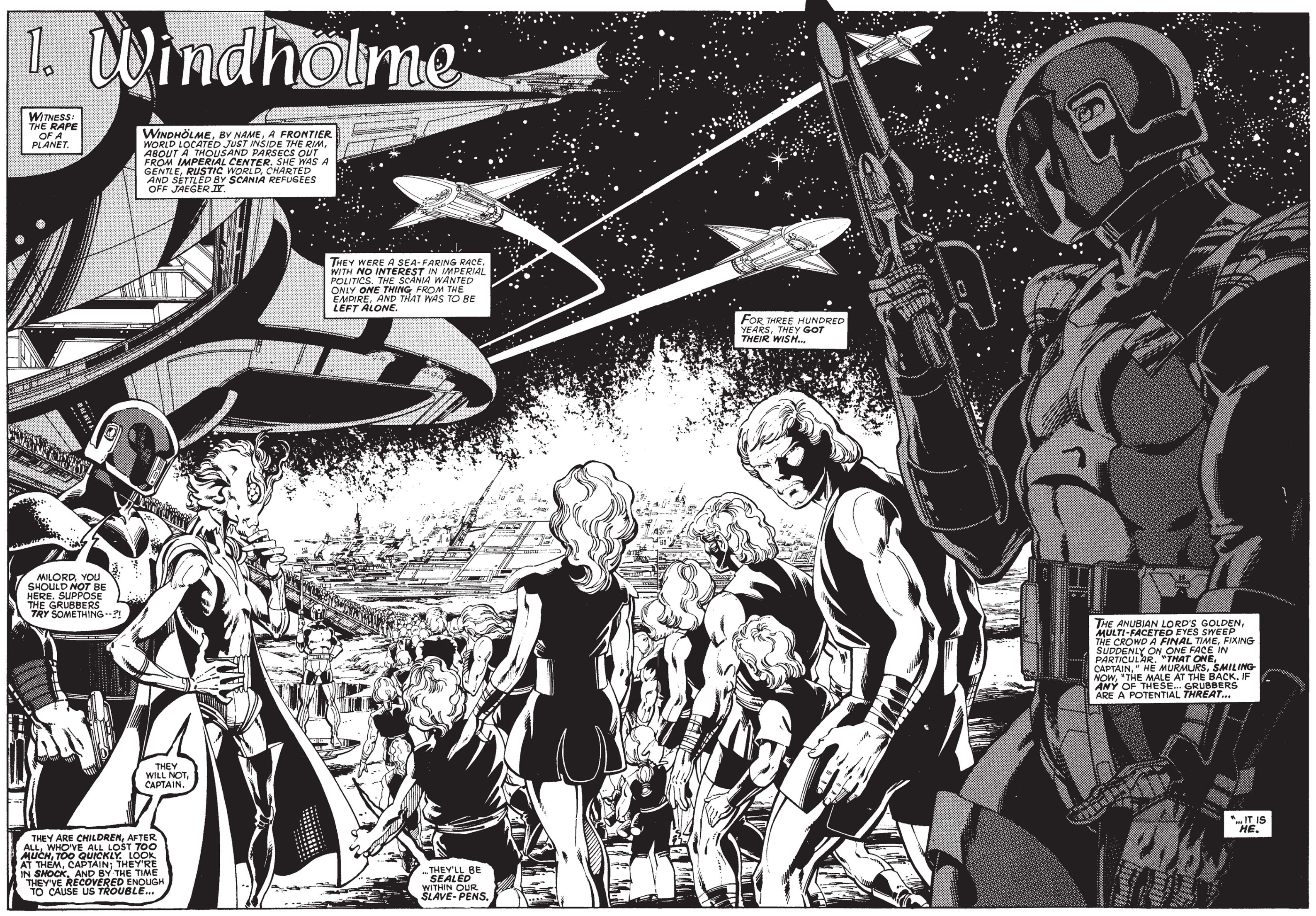 3. Starslayer, by Mike Grell. The ’80s was a heady time for comics, as veteran artists and writers took to the new breed of indie publishers to create their own series. Starslayer ran for a while but it’s the initial six-issue Pacific Comics run, written and drawn by Grell, that stands out. Starslayer had a very simple concept: a barbarian pulled forward into a super-scientific future. But Grell was at the top of his game, drawing loincloths and high-tech with equal gusto. Pure sex-infused pulp adventure. 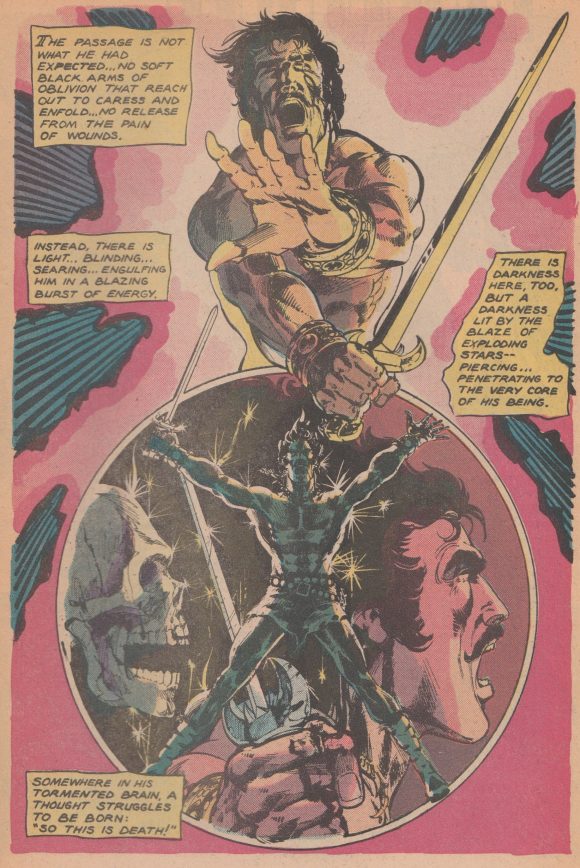 4. Sun Runners, by Roger McKenzie and Pat Broderick. Another product of the ’80s indie revolution. McKenzie was best known at the time for Daredevil, including the first DD stories drawn by Frank Miller; and Broderick had honed his chops on a variety of Big Two books, including Star-Lord. So it was natural they’d come together on this tale of independent contractors who maintain a galaxy-wide network of stellar fuel sources.

What’s that you say? What’s so crazy about that? How about the fact that one of the characters, the awesome Dr. Gibraltar, was a smart, tough, sentient elephant? Good enough? 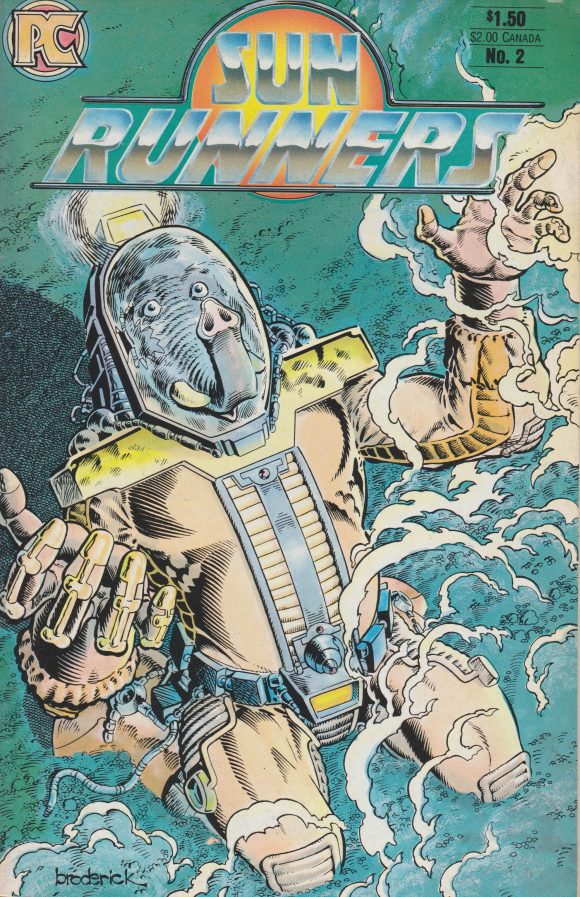 Bonus points to McKenzie and Broderick for not calling their book Star Runners.

5. Captain Victory and the Galactic Rangers, by Jack Kirby. The very first of the ’80s indie books came from the King himself, the mind and prolific pencil behind Fantastic Four, X-Men and so many other Marvel titles. Kirby had dabbled in space opera before, with the Fourth World saga and The Eternals. But this was the pure stuff: a starship on a mission of exploration, informed by Kirby’s long-ago military experience. 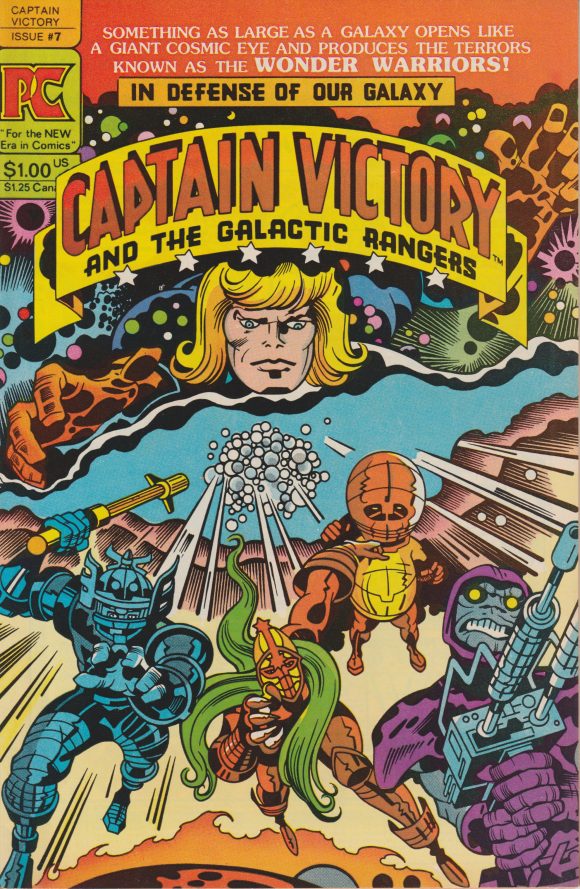 Captain Victory wasn’t Kirby’s finest work; it was pretty goofy in spots, and lacked the texture of the Fourth World epic or the human touch he brought to Kamandi. But it had as much energy as anything he ever tackled. And you’ve got to love any book with a supporting character called Paranex, the Fighting Fetus!

6. Battlestar Galactica, by Walter Simonson. Most of the ’70s Marvel run of this tie-in title was written by Roger McKenzie (remember him?). But it’s also notable for some of the first scripting work by Walter Simonson, who’d been drawing the title for a while. From the start, Simonson’s writing was crisp and smart, paving the way for his groundbreaking runs on Thor and, more recently, Orion and his own Ragnarok. 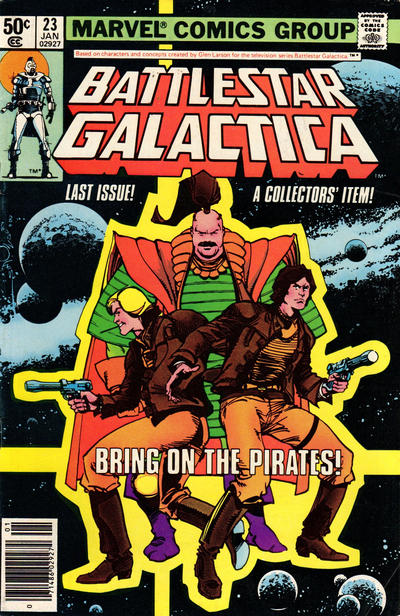 Honorable mentions to Greg Pak’s run on the first revamped Galactica comics from Dynamite, a quarter century later; and to Simonson’s own Star Slammers, a space opera with a lot of heart.

7. Saga, by Brian K. Vaughan and Fiona Staples. We tend to think of this book—one of the most justly acclaimed comics of the modern era—as half fairy tale, half family drama. But at its core it’s space-traveling SF of the finest kind, with first-rate world-building and plenty of character-driven action. 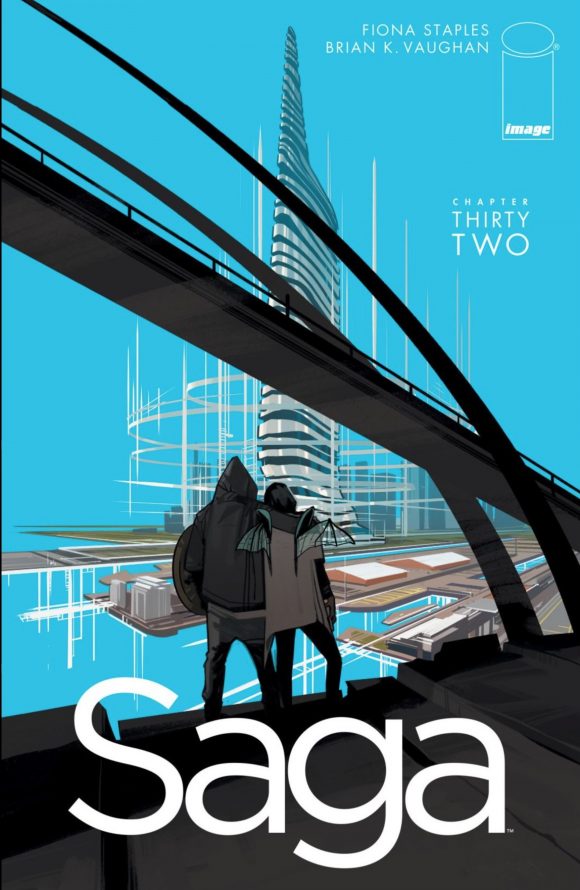 8. Star Trek, by Mike W. Barr, Tom Sutton and Ricardo Villagran. By the time DC picked up the rights in the mid-’80s, there had been a lot of not terribly distinguished Star Trek comics published. Picking right up in the wake of Wrath of Khan, the film that reenergized the property, Barr wrote Trek like a modern comic book, with running character threads, complex plots, and epic storylines. And, initially, no Spock. He was dead at the time! 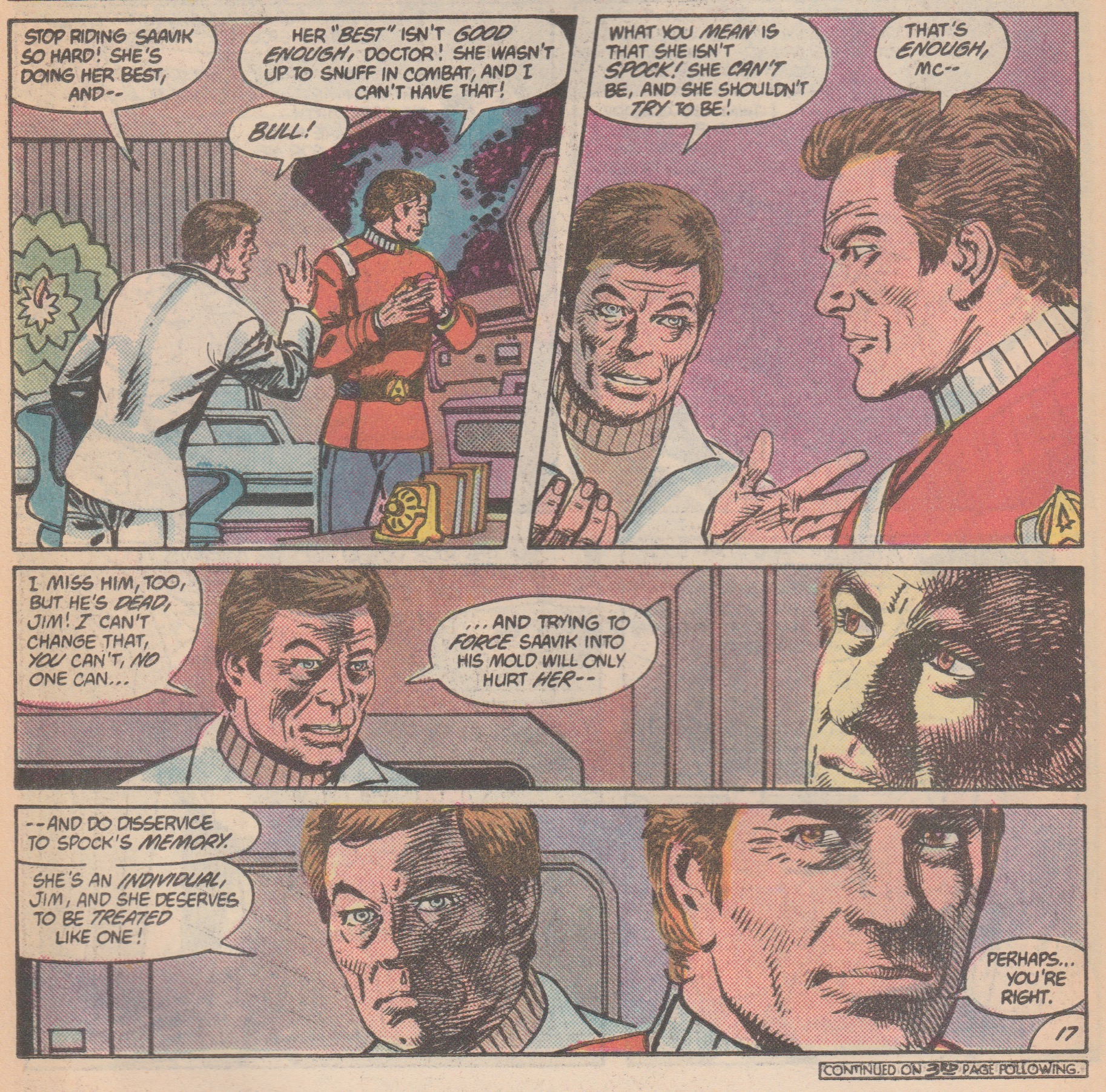 9. Space Family Robinson. This 1960s Gold Key entry wasn’t actually, well, very good. But it makes the list for sheer ballsiness: When Irwin Allen launched a TV series with an extremely similar concept, Gold Key didn’t sue him. They just stole his title, renaming their series Space Family Robinson: LOST IN SPACE On Space Station One. The result was decades of confusion for kids like me, who couldn’t understand why this comic featured twins called Tim and Tam Robinson instead of Will, Dr. Smith, and the Robot. Definitely crazy. 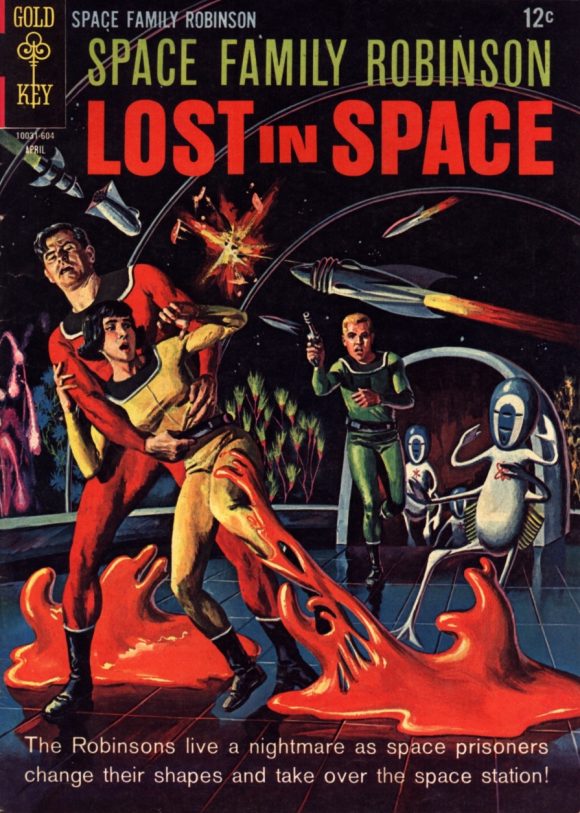 10. The Sword in the Star. Another forgotten series, this one premiered in the back of Marvel Preview #4, Star-Lord’s first appearance. Bill Mantlo, the veteran Marvel scripter later responsible for Rocket Raccoon, set up a huge-scale Arthurian epic that spanned the stars, with trippy art by Ed Hannigan, P. Craig Russell, Rick Bryant and Keith Giffen. Like Star Hunters and the original Star-Lord, this series too was cut short, after a mere two installments. 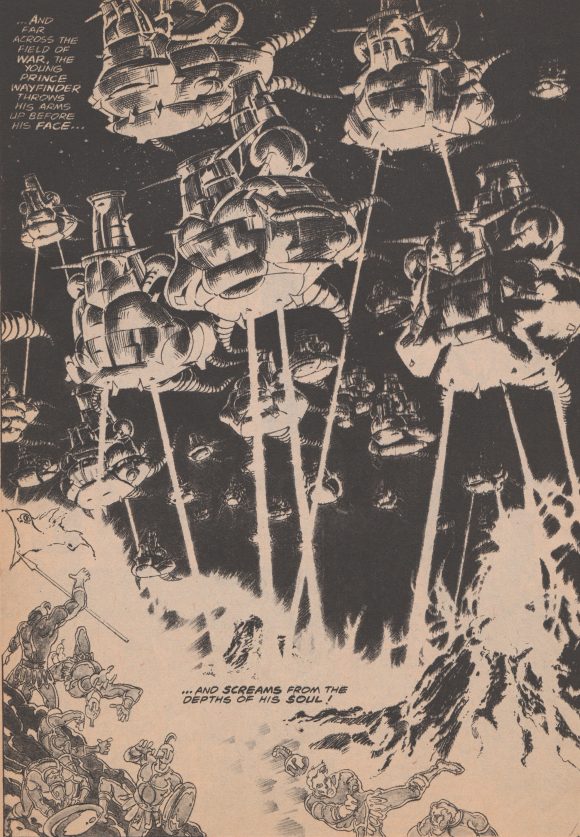 11. Iron Empires. Christopher Moeller wrote, drew and usually painted this far-future epic, which featured a fully immersive civilization that managed to feel both lush and worn down by the weight of history. Real SF, inspired by Heinlein-esque military fiction but also by the trippier works of Cordwainer Smith and the like. Full disclosure: I published one graphic novel in the series, Sheva’s War, while running DC’s Helix imprint. 12. Outer Darkness, by John Layman and Afu Chan. I’ve only seen preview art from this so far, but I want it bad. Spaceship-based SF/horror from the cocreator of Chew? Yes please! 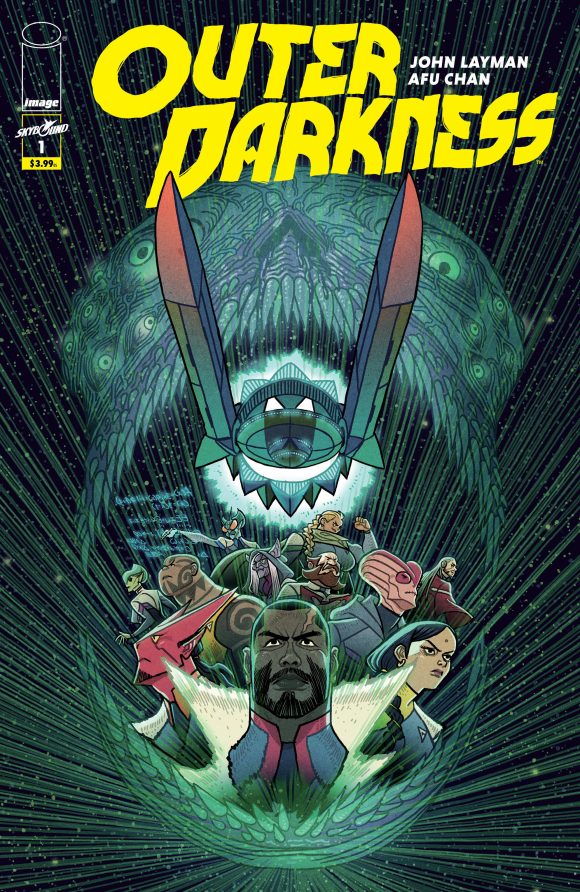 13. Cody Starbuck. Howard Chaykin has a long and varied career in comics, ranging from his early DC/Marvel work to his graphic novels of the ’70s and ’80s to American Flagg! (arguably his masterpiece) and more recent Image series like Satellite Sam and the controversial Divided States of Hysteria. This might be his lost masterpiece, a deeply textured, morally complex tale of a flawed, angry space pirate cutting a swath of blood through a galactic whirlpool of political and religious corruption. 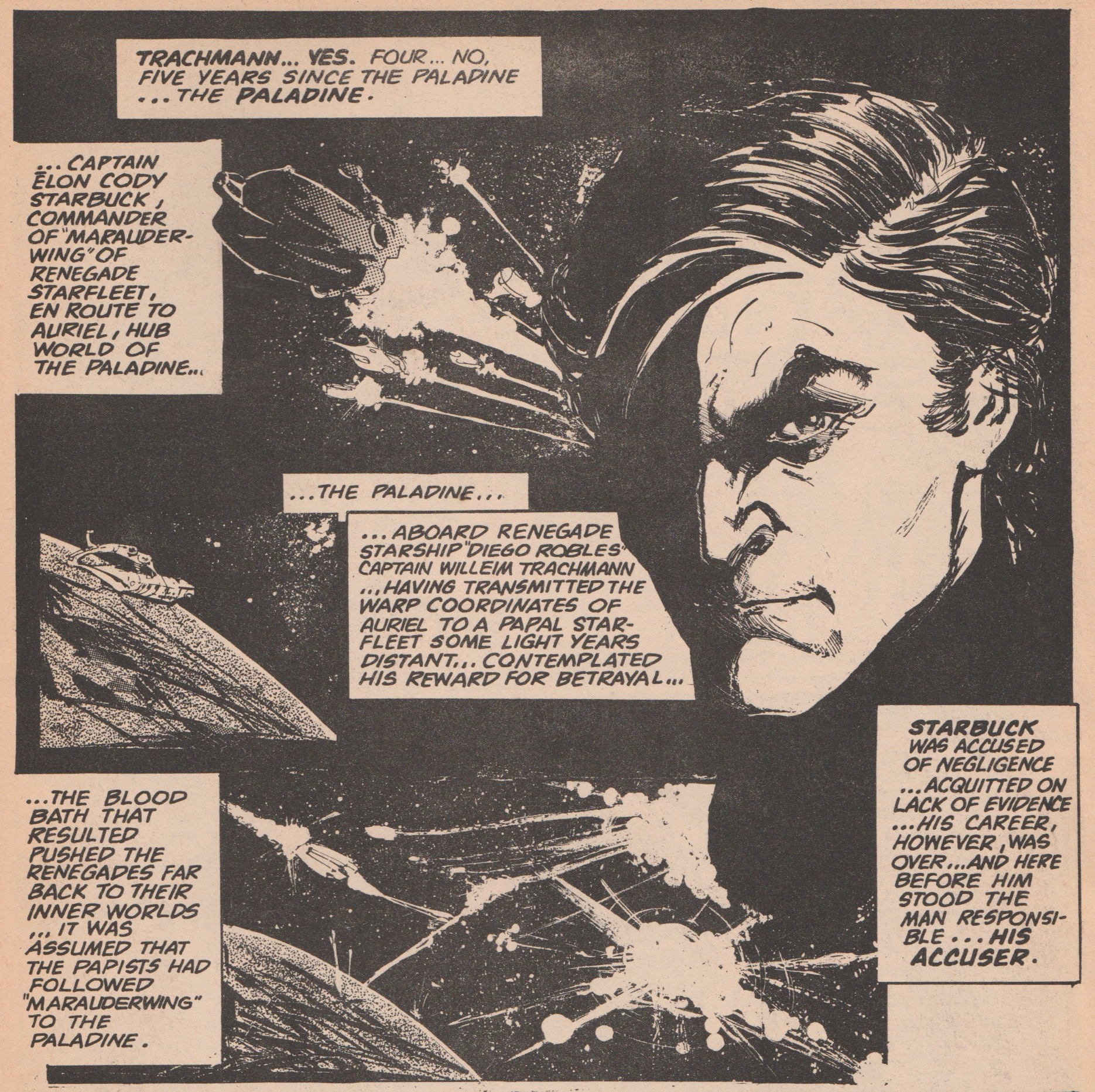 Cody Starbuck has never been reprinted, maybe because some of the material is strictly adults-only and often decidedly politically incorrect. It might also be because the stories were originally rendered in a variety of media, from black-and-white line art to color to a full-painted graphic novel that appeared in Heavy Metal. One installment, published as a one-shot from Mike Friedrich’s Star*Reach Productions, suffered from severe printing problems stemming from the then-new blueline coloring method, with painted color superimposed over b&w line art. That one alone would require a lot of restoration work. The Starbuck stories are often violent and difficult, and were criticized at the time for playing fast and loose with the character’s own continuity. But the Heavy Metal serial is an especially lovely, complex tale of interplanetary greed and vengeance. And I can tell you that this teenager had never seen anything like the very first Starbuck story, an incredible powder keg of space opera, rage against religious/political systems, fetish sex, and sheer blazing energy—all in 16 lovingly drawn pages.

So there you have them: 13 crazy space operas, a surprising number of which have never been reprinted. Go check them out… and then meet me back at the AHOY stables for Captain Ginger #1, out 10/17.

We’ll see how crazy we can make it.