This will be one of the buzziest books of the new year.

We sat down with Simon Spurrier on the last day of New York Comic Con to talk about life, the universe and everything (mostly comic books).  In Part 1 of the interview, Si talks The Spire, Crossed, and miscellany. Here, in Part 2, he talks about Cry Havoc, his forthcoming book from Image — and gives us a preview of the first few pages. 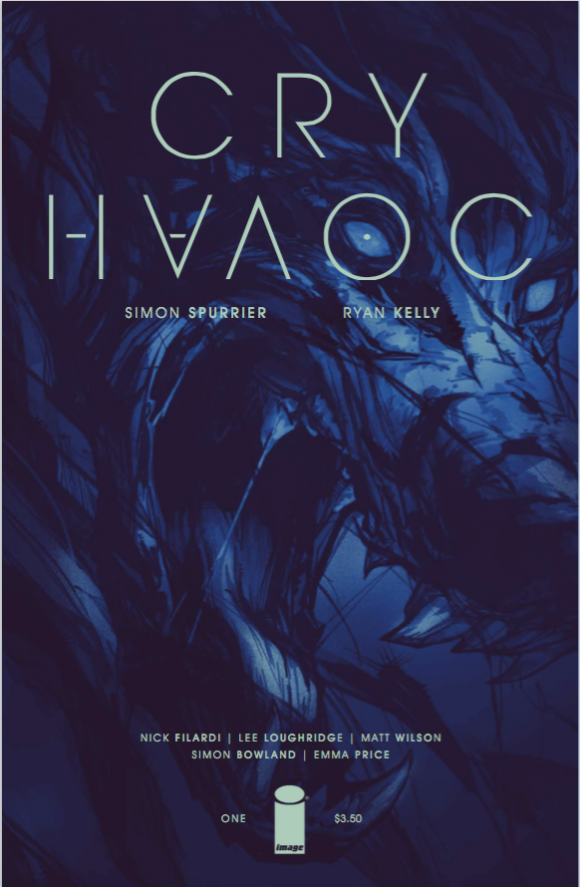 On the last day of New York Comic Con, I sat down with Simon Spurrier to talk about the many impressive books that he is currently working on. In the first part of our interview, we sat on the back steps of the Javits Center, enjoying some sunlight and talking The Spire and Crossed +100.  For this second part, we shifted to Cry Havoc, Si’s forthcoming book with Ryan Kelly, from Image.

We’ve had a chance to read the first issue (due in January) and it’s going to make a splash. After all, it’s a book billed by its creators as “Lesbian werewolf goes to war,” so it’s destined for great things.

G.D.: You have a book called Cry Havoc coming from Image. Can you talk about that?

Simon Spurrier: As you would have gathered from Six Gun Gorilla and The Spire and things like that, I find it fabulously difficult to easily define what they’re about. I’ve taken to abdicating responsibility for it and asking other people to tell me what my book is about.

In the case of Cry Havoc, I could talk to you for five hours about what it’s about – it’s cool and it’s dark and it’s clever and it’s thoughtful and it’s funny and all those things. But if I asked somebody what the first episodes about or how I should sell it to people – [As this point, we get kicked off of the steps by Javitz security, while two well dressed (or at least far better than us) men step out for a smoke, with private security lingering on the fringes.  We find our way back inside to a press table.]

So, the way it has been put to me, when asked what the book is about, and this is crass, elevator pitch style stuff, it’s about a gay street musician who encounters some horrifying occult event which changes her, tips her life into chaos, and in an attempt to resolve it and fix herself, she is dispatched to the war-torn hills of Afghanistan with a group of people who are like her, haunted by monsters inside them.

Do you remember the 1990s books, I think DC and Marvel each had one? I think it was Creature Commandos and Howling Commandos. It’s like my slightly more cerebral version of that, I think. It’s cool. It’s focused on this one woman who encounters this dog-like specter, this folk-lore-ic thing going on. There’s a lots of cool myths and legends in the U.K., especially about black dogs and, of course, she assumes, and everyone assumes, that she was bitten by a werewolf, and she thinks that’s the tackiest thing in the world and she’s very annoyed that she’s becoming a werewolf.

What’s really neat is that we’ve told the story in three separate threads. There’s the beginning section of the story when she begins to encounter all of the strangeness. There’s the middle section when she’s in Afghanistan with this group of other trained soldiers who are all in their own way – 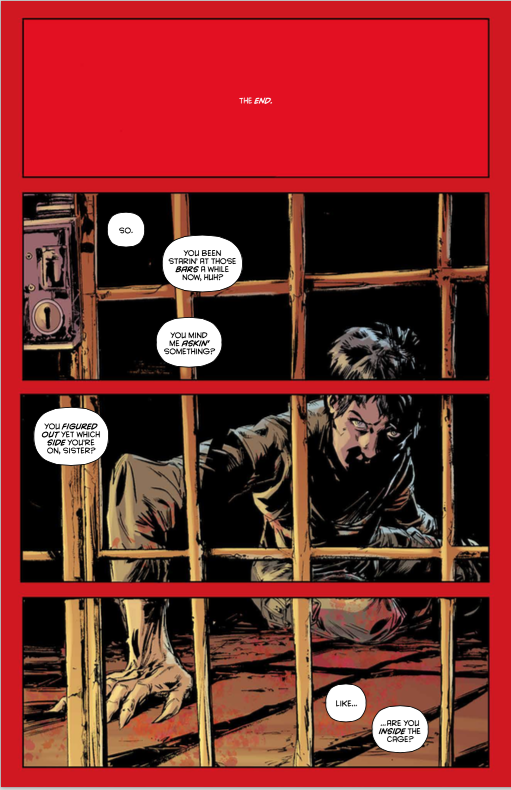 G.D.: Are they all werewolves themselves?

Si: No, they’re all different. They are all borrowing from international myth and folklore. So each episode focuses on one of those, so it’s essentially a different monster every episode.

Then the third thread is the end of the story, where she’s achieving these things that she’s trying to, but we’re telling all of these threads in parallel, which makes sense for reasons I can’t spoil easily. They interact with each other, juxtapose.

What we thought would be kind of fun for the reader to help differentiate between these three threads is if each one has a different colorist. So Ryan Kelly is doing all of the art and its absolutely blindingly brilliant, and then we’ve got Matt Wilson, Lee Loughridge, and Nick Filardi each doing one of these three threads.   And it works so brilliantly. It shows off so profoundly how deep the impact a colorist has on the art. I think that’s something that needs to be said and that people need to be reminded about. 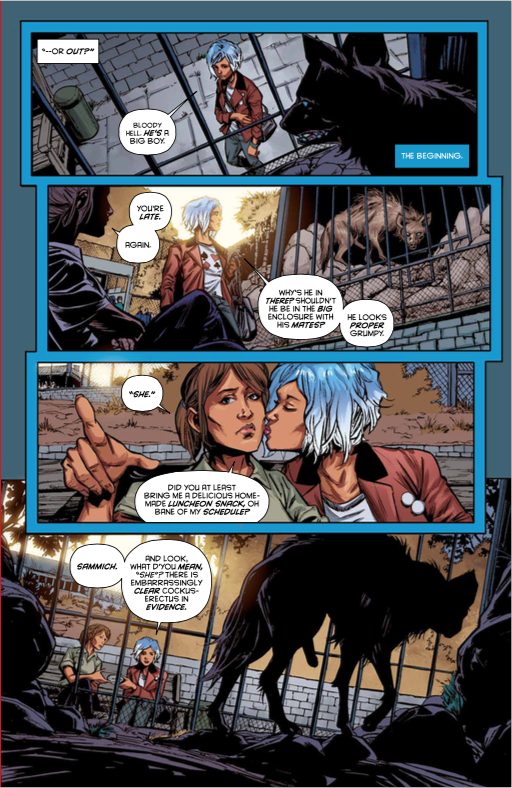 G.D.: It’s the under-appreciated bass player in a band.

Si: Exactly. We’re basically making the bass player the lead guy, and they’re all really good guys. And apart from everything else, it means we’ve got three extra names on our roster who will stand up and go to bat for the book, which is great when you’re doing all of your own marketing.

Si: There are reasons that are plot oriented that I can’t spoil too much. But essentially, the heart of it is about stories. You will have gathered that I am a bit of a geek for stories. It’s simply a question of, what is folklore? Folklore is simply a story that has ceased to have relevance. All these old myths that were attempts to explain and understand reality and they were once so believed that they might as well have been real, and with time they fade away and cease to be relevant and become a little bit superfluous.

But we live in a world where we are not creating new mythologies. We are quite stripped down, we are quite controlled and so I wanted to think about what would happen if those old and irrelevant stories decided that they would quite like to be relevant again, and how they would go about that. And I guess the narrative touchstone that I keep coming back to is Apocalypse Now, which is itself based on Joseph Conrad’s Heart of Darkness, wherein, something that should be understandable and controllable has decided that it is going to set up in own right, in a far away, distant, war-torn place, and that is sort of what is going on in Cry Havoc. It just so happens that this particular thing is going on in the heart of endless bloody conflict in Afghanistan, rather than in the jungle. 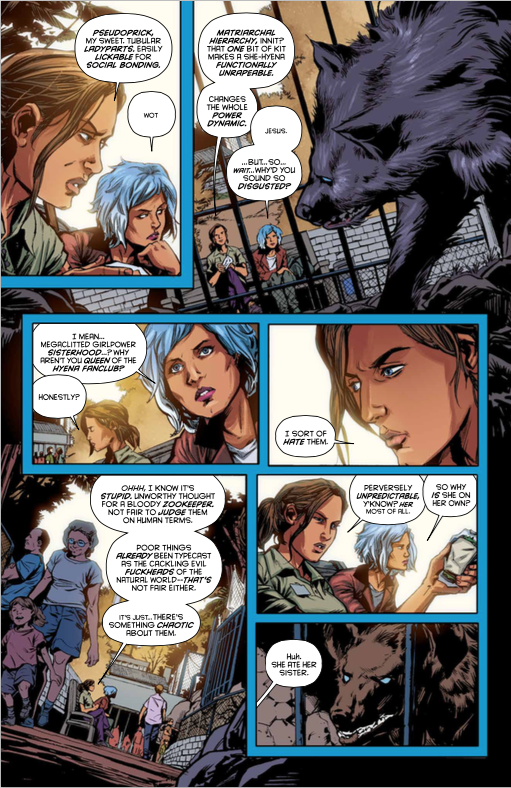 G.D.: This dovetails with Disenchanted in some ways, which is really grounded in folklore about faeries. I was in Ireland last year and was fascinated by the rich lore around faeries that the country had developed.

Si: What’s funny is, if you go and track down some of the monuments dotted around Ireland, these beautiful Ogham stones and all sorts of stuff, you’ll get to them and there will either be no plaque, no description, no explanation, or there will be something that tells you fuck all about what it really was, and just says, it was blessed by a priest in 1500 and something, because that’s today’s mythology, and the old mythology is old and inconvenient and wiped out. I love all of that stuff and thinking about it. I love the idea that just because the stories seem irrelevant, they don’t have to be. Part of what Cry Havoc is about is trying to find new ways to enjoy and make relevant these great old tales that we don’t really have any track with any more.

This is getting into spoilery territory, but the word that keeps coming back again and again in Cry Havoc is zeitgeist, it is the time ghost, the spirit of the ages, so much so, that the zeitgeist is sort of a character who is encountered and interacted with. I can’t say much more about that, but the whole thing revolves around these ideas of what it is to be a distillation of today. 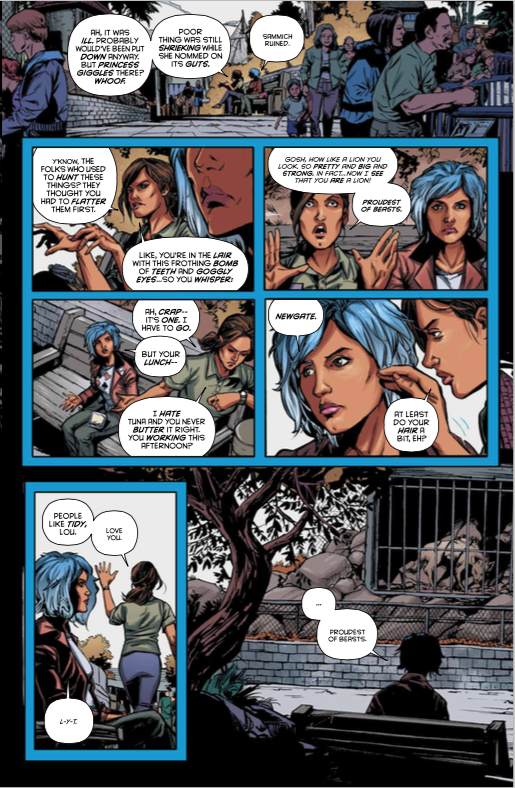 G.D.: Are there any particular folktales that you are looking towards in the future?

Si: Oh, there’s hundreds in there, and at the back of each of the episodes, there essay material about all these sources and where it comes from. My favorite one so far is about a guy in the squad called Ottar, and he is based around a Norse god called Ottar the Simple, which was not a pejorative, but an honorific for him.

His story is in one of the Poetic Edda, is that he was so obsessed with the goddess Freya that he gave her endless sacrifices, and he begged for her to help him understand his own lineage, his own family tree. And she did so in a really weird way, by sneaking him into the cave of a giant, a seeress, who would be able to look back into his past and tell him all about these things. Because this is Norse mythology, the way that she sneaks him into the giants cave is by turning him into an animal, a boar in this case.

It is called Hildisvin, or Battle Pig. So Ottar is the Battle Pig. And what’s really cool is you look deeper into this a bit deeper, when it says Freya rode her Battle Pig wherever she went, it doesn’t necessarily mean that she was necessarily sitting on his back. They were certainly lovers, Freya was a bit of a goer in the old stories; she has hundreds of lovers and not all of them human.

So, yeah, in Cry Havoc, Ottar is this big Icelandic guy who is just constantly horny. There’s this funny stuff where he’s dressed in his mercenary uniform in an APC helicopter, accompanied by a group of UN soldiers, and the sergeant is getting cross because he doesn’t want these people in his unit, and he turns around and sees Ottar with his helmet on his lap, cracking out a quick one. And he’s like, “Is that guy jerking off in my APC?” And Ottar [in a poor facsimile of a Scandinavian accent, possibly Russian], “Yes, but I need to make balls explode.”

It’s cool. And there’s all sorts of that stuff. Each of these team members is a different face of a myth like that and then there’s a whole bunch of other ones that start to come in towards to the end. So, it’s been very, very carefully researched.