The documentary on the history and role of women in comics has hit its Kickstarter mark — with stretch goals announced — and director Marisa Stotter writes about the joy of funding as part of our series, THE MAKING OF ‘SHE MAKES COMICS.’

On Sunday morning, I woke up to a text message from Mike, one of the executive producers of “She Makes Comics.” It said, simply, “Congratulations!” On what? I thought, still groggy from sleep. Then it occurred to me to check our Kickstarter page, which had been steadily climbing toward our goal of $41,500 the previous night.

Tremulous fingers hit the keyboard of my laptop. Had we made our goal already? Had I slept through it? What’s going on?  My head was buzzing with a mixture of excitement and sleepiness. Did we really do it?

I saw our Kickstarter page. We’d made it. Around 10 am Pacific Standard Time, we’d hit our goal. I choked down a squeal of delight so as not to wake my roommate. We’re funded!

A month ago, Respect Films and Sequart launched an ambitious campaign for “She Makes Comics,” our documentary celebrating women’s storied yet underappreciated history in comics. At the start, we’d known that there were others out there who, like us, wanted to see women of the comics world come together for the first time on film and share their inspirational stories. But we hadn’t quite expected more than a thousand supporters to come out of the woodwork and make such generous pledges to our campaign. Words can’t express how grateful and thrilled we are!

Although we’ve reached our initial goal, the campaign doesn’t end until midnight PST on Thursday, March 6. We’ve announced a stretch goal that we hope will harness the project’s momentum. If we reach $50,000, we will also film a short, mini doc about Jackie Ormes, the first female African-American cartoonist who had a remarkable professional career during the Golden Age of comics. We’re eager to tell her story, and if we reach our stretch goal, we’ll be able to include this as an extra alongside She Makes Comics.

Now that the campaign is drawing to a close, we’re ready to move onto the next phase of our production. In late March, we’ll be attending Emerald City Comic-Con to conduct more interviews and film the lively con events. After that, we’ll be jetting back to New York for even more interviews. All the while, we’ll be doing plenty of research and crafting the shape of the film. I’ll be living in Final Cut Pro for the next few months, editing together what will ultimately become “She Makes Comics.”

From the bottom of our hearts, we thank all of our backers for their support. There’s nothing more satisfying than sharing your passion with others, and we’re thankful to have such a fantastic community of comics fans with whom to share “She Makes Comics.” In these last hours of the campaign, help us to reach our stretch goal and bring you even more amazing stories from the women of comics history. And be sure to keep your eyes peeled for more news from our team as we work hard to bring this film to life. 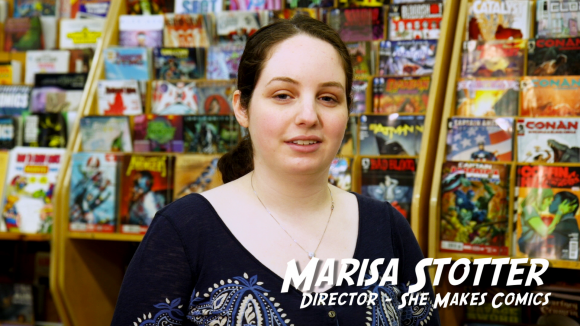