James T. Kirk-cum-Harvey Dent and the once and future Boy Wonder will appear together at New York Comic Con.

Like the first Batman ’66 animated feature, Return of the Caped Crusaders, a year ago, Batman vs. Two-Face will have its world premiere at New York Comic Con in October — and William Shatner and Burt Ward will appear together at a panel accompanying the screening.

Be amongst the first audience to see Batman vs. Two-Face, the highly anticipated sequel to the 2016 hit animated film Batman: Return of the Caped Crusaders. Batman vs. Two-Face finds Batman and Robin back in classic 1960s action, protecting Gotham City from some of the most nefarious villains in comics history. But when the mutilated master of multiplicity, Two-Face, begins staging a daring crime wave across Gotham, the Caped Crusaders must work double-time to discover his mysterious secret identity before they can halt his evil-doing – all the while combating the likes of Catwoman, Joker, Riddler, Penguin, Bookworm, Hugo Strange and King Tut! The late Adam West leads the star-studded cast in his final performance as Batman – playing opposite fellow pop culture icon William Shatner (Star Trek) as the criminally conflicted Harvey Dent/Two-Face, and alongside his longtime pal Burt Ward, supplying more “holy” fun as the Boy Wonder himself, Robin. See the film, then stay for an action-packed panel comprised of Shatner and Ward with the filmmaking team of supervising producer/co-screenwriter James Tucker (Teen Titans: The Judas Contract), producer/co-screenwriter Michael Jelenic (Teen Titans Go!) and director Rick Morales (Batman: Return of the Caped Crusaders). TV Guide Magazine senior writer Damian Holbrook will moderate the fun. Warner Bros. Home entertainment brings Batman vs. Two-Face to Digital on October 10, 2017, and Blu-ray Combo Pack and DVD on October 17, 2017.

The Main Stage 1-D Presented by AT&T is cleared between Panels. For full details on how to reserve a seat in a panel on the Main Stage, click here. 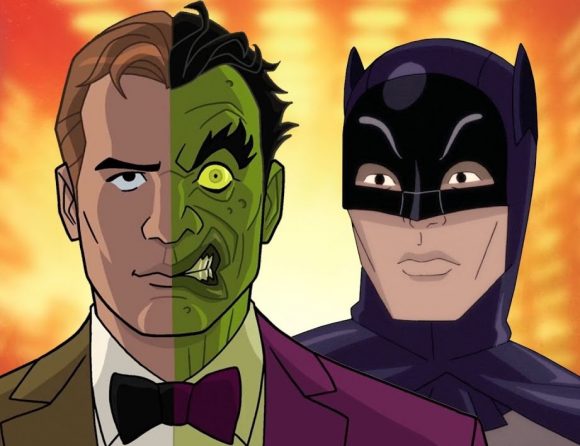 Though I expected there would be an NYCC premiere, I have to say I’m halfway surprised this is a Sunday morning screening. But hey, fun’s fun. Last year was a raucous affair and the crowd went bananas when it was announced that Shatner, in a bit of dream casting, would be appearing as Two-Face. I can only imagine how the crowd will respond to him in person this year. And — Holy Hamminess! — I bet he and Ward will be fun together on stage.

Still, it’s bittersweet since Adam West is no longer with us to join in the Bat-shenanigans. What a panel that would have been.

MORE: For Adam West’s comments on Return of the Caped Crusaders and the legacy of Batman ’66, click here.